For the spectrophotometric method, aliquots of standard ropinirole solutions ranging from 5-30 µg/ml (from stock solution of 100 µg/ml) were prepared using ethanol and absorbances were noted at 250 nm. Calibration curve was drawn by plotting absorbances of ropinirole versus concentration of respective drug solutions. Twenty tablets of ropinirole were weighed and average weight was calculated. Quantity of powder equivalent to 10 mg was weighed accurately and transferred to a 100 ml volumetric flask. The active ingredient was extracted with ethanol and volume was made up with ethanol and filtered. The filtered solution was further diluted to get requisite concentrations and analyzed as described under the procedure for pure sample, fig. 1. The concentration of ropinirole in tablet formulation was calculated from calibration graph. Results are given in Table 1. 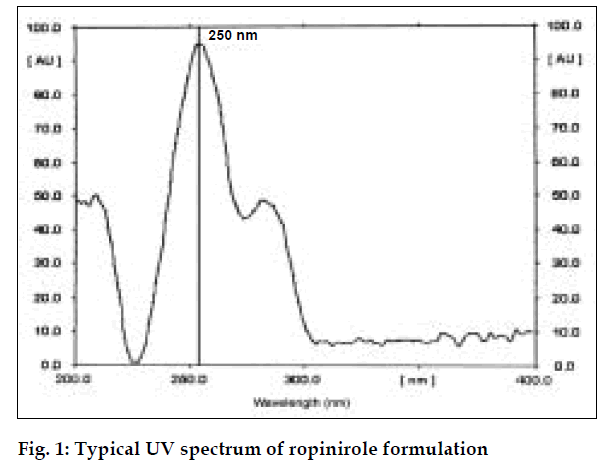 The second method is HPTLC, in which selection of mobile phase, selection of internal standard, solvent and wavelength are important [7]. Methanol: acetonitrile (8:2, v/v) was selected because in this system good compact and dense spots were obtained. The wavelength selected for scanning was 254 nm. Since aripiprazole peak was well resolved from ropinirole peak and had good peak shape, aripiprazole was selected as the internal standard.

For the HPTLC method, standard stock solution of ropinirole (1000 µg/ml) and aripiprazole (1000 µg/ml) were prepared in ethanol. The solution was further diluted with ethanol to obtain a series of concentrations ranging from 40 to 120 µg/ml of ropinirole, each containing 60 µg/ml of aripiprazole. Five microlitres from these solutions were applied on precoated TLC plate. The plate was analyzed photometrically and chromatograms recorded. Calibration graph was plotted using peak area ratios of ropinirole to internal standard peak areas versus concentrations of ropinirole. Twenty tablets of ropinirole were weighed and average weight was calculated. Quantity of powder equivalent to 10 mg was weighed accurately, dissolved and volume was made up to 100 ml with ethanol. This solution was filtered and further diluted to get requisite concentrations and analyzed as described under procedure for pure sample, fig. 2. The concentration of ropinirole in tablet formulation was calculated from calibration graph. The results are given in Table 1. 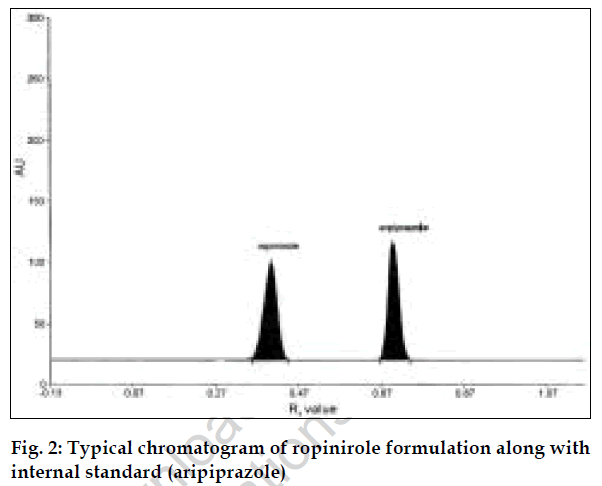 The developed methods were validated for parameters like accuracy, precision and stability. The regression equation and validation parameters are given in Table 2. Accuracy was established by performing recovery studies. These were carried out at 50 and 100% levels. Recovery values close to 100% indicates accuracy of method. For HPTLC method, limit of detection (LOD) and limit of quantification (LOQ) were found to be 12 and 40 µg/ml, respectively. Precision was studied under intra-day precision, inter-day precision and repeatability.

The developed UV spectroscopic and HPTLC method are precise and accurate. From the two methods developed for the estimation of ropinirole, the HPTLC method was found to be more precise. However, both techniques can be applied for routine analysis of ropinirole from tablet dosage forms.

The authors acknowledge M/s SNR and Sons Charitable Trust, Coimbatore, India for providing the facilities to carry out the experiment and Tamil Nadu Pharmaceutical Sciences Welfare Trust, Chennai for awarding Scholarship for the work.