Assessment of Bailing Capsule in the Treatment of Chronic Glomerulonephritis: A Meta-analysis

Chronic glomerulonephritis (CGN) is a common disease frequently occurring in young and middle-aged people. Its clinical manifestations are proteinuria, hematuria, hypertension, edema[1,2]. The disease has a slow onset and as the disease progresses, the patients can have different degrees of renal injury and even develop into end-stage renal failure, therefore, timely and effective treatment is required. The pathogenic factors of primary CGN are complex, the disease develops slowly, and there is no obvious symptoms in the early stage of this disease. It can gradually develop into chronic renal failure[3]. Chinese medicine practitioners believe that CGN falls into the categories of labor deficiency, hematuria and edema and it is caused by the weakness of the internal organs and the invasion of foreign pathogens. Although western medicine can effectively improve the clinical symptoms of CGN, there are limitations to this treatment due to a large number of clinical drugs and different curative effects[4]. Following the principles of syndrome differentiation and treatment based on traditional Chinese medicine (TCM), treatment and control of the entire disease are very beneficial to the improvement of patients’ clinical symptoms and stability of the disease. Bailing capsule is separated from Cordyceps sinensis by bioengineering method and made by low temperature fermentation. It has a very similar chemical composition to Cordyceps sinensis, including vitamins, amino acids, adenosine and polysaccharides. With wide clinical application, it was found that Bailing capsule can reduce urinary N-acetyl-β-glucosaminidase levels in human body and can act on renal tubules to protect the activity of Na+/ K+-ATP, improve the secretion of epidermal growth factor in organism, repair the damaged epithelial cells and improve renal tubular function, thereby effectively inhibit renal interstitial fibrosis and renal tubular atrophy, and prevent further deterioration of renal function[5]. However, it is not yet clear what the clinical situation, dosage and course of treatment, and how to deal with the possible adverse reactions of Bailing capsule. In this paper, a meta-analysis of the clinical studies reported in Bailing capsule for the treatment of CGN was conducted to provide evidence for the efficacy, range of adaptation, dosage and course of treatment, adverse reactions and other evidencebased medical evidence for the treatment of CGN, so as to provide reference for the rational application of the drug and further research. It might cause mild side effects such as diarrhea, constipation, and abdominal discomfort.

VP information database of Chinese Sci-tech periodicals (2004-2017.12), Chinese Journal full text database (2004-2017.12), China RCTs network database, MEDLINE database (2004-2017.12) were retrieved by computer and traced the references included in the literature. The search terms included, CGN, Bailing capsule, randomised controlled trial. One time published randomized controlled or controlled studies, in which the subjects were CGN patients, who were in accordance with recognized clinical diagnostics, pathological diagnosis and efficacy evaluation criteria[6,7] were included. The age was between 15 to 72, regardless of sex. The treatment intervention was Bailing capsule, with a control group. Time to start treatment, course of treatment and dosage were not limited and the balance between groups was good.

Non-randomized controlled or controlled studies in which subjects with unclear diagnosis, or secondary kidney disease such as lupus nephritis, diabetic nephropathy, purpura nephritis, or patients with severe renal insufficiency were excluded. The research and design were not rigorous, such as nonstandard diagnostic and therapeutic standards, unclear interpretation of sample data, multiple treatment intervention and where the statistical method was not appropriate. Repeated publications, review articles, commentary, case reports were also excluded.

Revman 4.2 software provided by Cochrane Collaboration network was used. The X2 test was used to examine the heterogeneity of clinical research results. P>0.05 indicated there was no heterogeneity between groups and the fixed effect model was used to analyze the results. P<0.05 meant there was heterogeneity between groups. Subgroup analysis or sensitivity analysis was used to eliminate heterogeneity according to the possible heterogeneity factor. If heterogeneity still existed while clinical suggested of homogeneity, using the random effect model to analysis. The odds ratio (OR) and 95 % CI were used as effect size. Measurement data differed according to whether the unit of measurement was the same. When each clinical study used the same scale to measure the same curative effect, the weighted mean difference (WMD) and 95 % CI were calculated and the meta-analysis forest map was drawn according to the above results. Sensitivity analysis was performed after excluding studies that did not use blinding or blinding hidden protocols. The potential publication bias assessment was using inverse funnel plot analysis.

In the initial examination of 68 articles, 50 articles were excluded by reading the title, abstract and full text. After one by one screening and evaluation final 8 Chinese articles[8-15] were selected, with a total of 661 patients (330 in the treatment group and 331 in the control group) were included in the analysis. Pretreatment urinary protein level in all cases was less than 3.5 g per 24 h and the duration of the disease was 3 mo to 8 y. Treatments for the 3 studies (Liu and Cheng[8], Qian et al.[9], Dai et al.[10]) were Bailing capsule plus conventional treatment, compared to conventional treatment; three studies (Liu and Liu[11], Qi et al.[13], Zhou and Zhao[15]) using Bailing capsule plus telmisartan, compared to telmisartan and one study (Liu et al.[14]) using Bailing capsule plus alprostadil, compared to alprostadil.

One of the eight studies (Dai et al.[10]) mentioned the use of the random number table method, and the rest did not mention the specific randomization method or only the word random was used. None of the studies mentioned whether blinding was used. The Jadad scores of all 8 papers were 2 to 3 points.

Heterogeneity test, X2=10.73, df=7, p>0.05, indicated that the inclusion studies were homogeneous, using the fixed effect model, OR=2.25, 95 % CI [1.43, 3.59]. The hypothesis test of effect combination value was Z=3.41, p<0.01. One horizontal line in figure 1 represented the CI of one test result. The shorter the CI was, the more accurate the results were, otherwise, the sample size was small and the conclusion was not accurate and reliable. The middle line represented OR=1 and the lowermost diamond symbol represented the combined results of the included studies. The short horizontal line/diamond symbol was in contact with or correlated with the midline, indicating that the difference was not statistically significant. The favorable outcome short horizontal line/diamond symbol on the right side of the midline indicated that the treatment group was effective, while on the left side suggested that the control group was effective, but the adverse outcome was the opposite. In this chart, the diamond symbol is on the right side of the midline, indicating that the clinical efficacy of Bailing capsule group and non-Bailing capsule group on CGN is different. Bailing capsule group has a better curative effect than the non-Baling capsule group (Table 1). 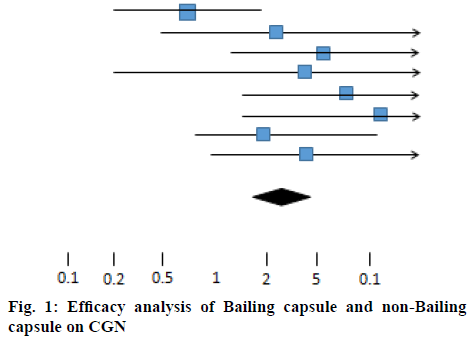 The change in urine protein level within 24 h after treatment was measured in the 8 studies. Heterogeneity test, X2=62.74, df=7, p<0.01, indicated that there was obvious heterogeneity in the study (figure 2). Because of the clinical homogeneity in each study, the baseline of sex, age and course of patients between groups was basically the same, so the effect size was combined with the random effect model. The results showed that there was a significant difference between groups [WMD=-0.93, 95 % CI (-0.68,-0.15), Z=2.86, p<0.01], indicating that there was a difference in the therapeutic effect of Bailing capsule group and non-Bailing capsule group on proteinuria. Bailing capsule had a good effect on the control of proteinuria (Table 2). 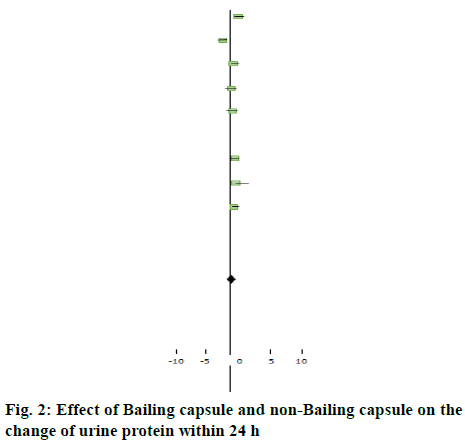 The course of treatment was usually 2-4 months. The dosage of Bailing capsule was a conventional dose, with 5 capsules each time (0.2 g/table), 3 times a day. Six studies did not describe the occurrence of adverse reactions, so the incidence of adverse reactions was not counted. Two studies found no serious adverse reactions. Since the quality of the 8 research methodologies included in the review was poor, the sensitivity of this system evaluation to high-quality research cannot be analyzed. In addition, all studies did not mention the blinding method, nor could exclude the sensitivity analysis without blinding. The evaluation and analysis of publication bias in the comparison of the efficacy of Bailing capsule group and non-Bailing capsule group were involved. The dissymmetry of the funnel plot and non-funnel plot distribution indicated that there was a certain publication bias in the study (figure 3). 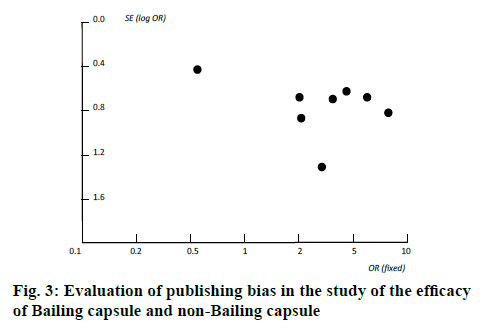 Meta-analysis is a series of processes that comprehensively analyze multiple medical studies with the same research goals. It can combine a number of comparable individual research results for analysis, thereby enhancing both the strength of the preliminary conclusions of the analysis and evaluation of the strength of the effect. The introduction of meta-analysis into TCM research and scientific evaluation of its efficacy and problems can provide reliable evidence for clinical treatment and provide new ideas for further research in the future.

CGN is still the main cause of end-stage renal disease in China. Proteinuria is both an important clinical marker of CGN nephropathy and an independent risk factor for accelerating the progression of renal disease[16]. Therefore, effective control of proteinuria has become one of the main targets of CGN treatment. The main ingredient of Bailing capsule is fermented Cordyceps sinensis powder, which contains many trace elements. It has the functions of nourishing the kidney and nourishing spleen, replenishing qi and nourishing Yin, solidifying the body and nourishing yuan and so on[17]. The results of modern pharmacology show that[18], bailing capsule can inhibit the expression of interleukin (IL)-6, IL-10 and so on, so as to realize the role of bi-directional regulation of human immune function. It can improve the utilization of amino acids, promote protein synthesis and metabolism, and will not produce obvious adverse reactions.

In this meta-analysis, 8 clinical studies on the treatment of CGN with Bailing capsule were collected, including 661 patients with non-nephrotic syndrome. The results showed that conventional dose of Bailing capsule could improve the clinical effect of CGN and control proteinuria, and the curative effect was better than that of the non-Bailing capsule. No serious adverse reactions were found when using Bailing capsule.

Because of the small sample size of the 8 studies, most of the literature collected was Chinese literature, the inclusion and exclusion criteria were not fully reported, the curative effect criteria was not uniform enough, the methodological quality of the study was not evaluated sufficiently. The bias of the positive result papers by the author or the magazine, resulting in a lack of literature on negative results. All these reasons may increase the chances of selection bias and publication bias, resulting in meta-analysis overestimating the true therapeutic effect of Bailing capsule. In addition, some studies lacked relatively perfect renal pathological data, and some studies with pathological data have failed to analyze the curative effect of different pathology and also failed to analyze the effect of some factors that may make the condition worse, such as infection, hypertension and metabolic disorder and this will also interfere with the evaluation of the true efficacy of Bailing capsule.

Through this meta-analysis, the therapeutic effect of Bailing capsule on nephritis proteinuria can be clearly defined, but the course of treatment and the observation of adverse reactions of Bailing capsule need further discussion. In the future, high-quality, multi-center, randomized, blinded, and controlled clinical studies can be conducted on these issues.

There was no conflict of interest.

Clinical study on the immunomodulatory effect of moxibustion on patients with chronic glomerulonephritis.