Inflammatory bowel disease (IBD), as the sum of a group of chronic intestinal inflammatory diseases, including ulcerative colitis (UC) and Crohn’s disease (CD), has not been clearly defined at present[1-3]. Its main clinical manifestations are abdominal pain, diarrhoea, mucus, purulent bloody stool, tenesmus, etc. and extraintestinal manifestations such as skin, mucosa, joints, eyes, liver and gallbladder, etc. In recent decades, the incidence rate and incidence rate of IBD in the world have been increasing year by year[4,5]. Its pathogenesis is mainly related to environmental and genetic factors, including diet, smoking and infection, which can increase the incidence of IBD. Now a days, IBD has become a common disease of digestive system in China, with high recurrence rate, many complications and high risk of canceration, which seriously affects the quality of life of patients[6,7].

At present, the commonly used diagnosis method of IBD is colonic endoscopy combined with submucosal biopsy, but it belongs to invasive examination, the patient compliance is poor and cannot meet the needs of dynamic observation of the disease. Other examinations such as Computed tomography (CT), Magnetic resonance imaging (MRI) or capsule endoscopy cannot be widely used due to the radiation risk and relatively expensive cost[8-10]. With the in-depth clinical research, various non-invasive examinations have been paid more and more attention by the medical community. The specific biomarkers have been widely paid attention because of the advantages of simple and convenient detection, economy, non-invasive and good patient compliance in the detection and diagnosis of disease activity.

Calprotectin, as a new acute inflammatory marker, has attracted extensive attention of researchers in recent years[11,12]. Relevant studies have shown that calprotectin plays an important role in the evaluation of IBD activity, and can be used as an indicator for early diagnosis and judgment of disease activity of IBD. The relationship between calprotectin and clinical diseases, especially with rheumatoid arthritis, cystic fibrosis, systemic lupus erythematosus, colorectal cancer and other diseases has been a large number of studies, but the research on IBD is still lacking. Therefore, it is very important to explore the relationship between calprotectin and IBD. In this study, the levels of Sieric calprotectin (SCP) in different stages of IBD were quantitatively detected by Enzyme-linked immunosorbent assay (ELISA), and the levels of C-reactive protein (CRP) and Erythrocyte sedimentation rate (ESR) were detected at the same time to explore the changes of SCP level in IBD and analyze the relationship between SCP and disease activity, so as to evaluate the clinical value of serum calprotectin in judging the activity of IBD.

Inclusion criteria: All patients did not use glucocorticoid therapy, non-steroidal anti-inflammatory drugs (NSAIDs) and Proton pump inhibitor (PPI) preparations in the past 1 mo. No immunosuppressant was used in the past 3 mo, and there was no clear history of infection in the near future. There were no severe heart disease, lung, nerve and mental disease.

Exclusion criteria: Excluding diabetes, other endocrine and autoimmune diseases, liver and kidney function damage; Women of childbearing age, pregnant women and trauma taking contraceptives. In addition, 64 patients with gastrointestinal symptoms such as abdominal pain and diarrhoea but normal colonoscopy results were selected as the control group. The specific data of IBD group and normal control group are shown in Table 1.

Blood samples were collected from the median cubital vein of all subjects 12 h after fasting. The serum was collected in test tubes without pyrogen and endotoxin. After collecting the blood, the serum and red blood cells were separated rapidly and carefully after centrifugation at 3000 for 10 min. The serum samples were frozen at -20º. Serum calprotectin was detected by ELISA assay, and the detection process was carried out in strict accordance with the instructions of the kit. All reagents and samples were balanced to room temperature before use. According to the operation process of conventional double antibody sandwich ELISA, the absorbance (Optical density (OD) value) of each well was measured in turn with the enzyme labelled instrument set at 450 nm. If the diluted sample with 1:20 volume ratio exceeds the range of standard curve, increase or decrease the dilution ratio until the OD value is within the range of standard curve. CRP was detected by automatic biochemical analyzer (latex enhanced immunoturbidimetric method), ESR was detected by automatic hematocrit detector.

Index of disease activity in patients with IBD:

Statistical Package for the Social Sciences (SPSS) 20.0 software was used to process the data. The measurement data were expressed by x±s, and normal test and variance “t” test were conducted. The non-normal distribution was converted into normal distribution by natural logarithm. The count data is expressed by rate. p<0.05 was considered to be statistically significant. 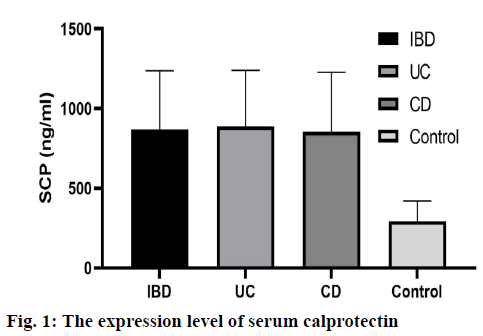 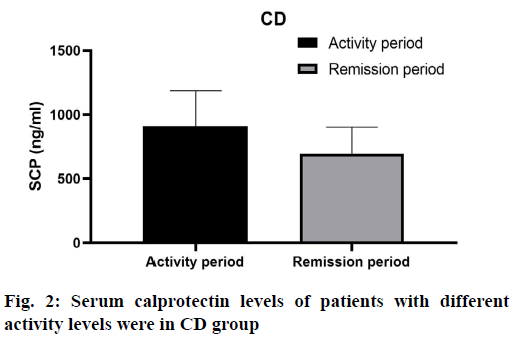 Table 3: Comparison of Serum Calprotectin Levels in Patients with UC at Different Active and Remission Stages

Compared with remission stage, the levels of SCP in mild, moderate and severe active groups were higher (p<0.01). There were significant differences in SCP and CRP between different stages of IBD activity group (p<0.01), and the levels of SCP and CRP were gradually increased with the increase of grade. There was no significant difference in CRP level between remission group and mild activity group, and ESR level between mild and moderate active IBD group (p>0.05), as shown in fig. 4. 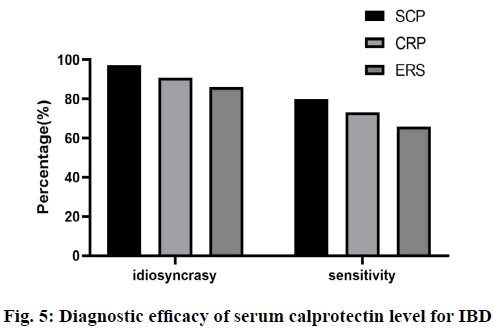 IBD, including CD and UC, is a chronic non-specific intestinal inflammatory disease. Recurrent IBD seriously affects the quality of life and mental health of patients, and mastering the disease activity can guide the treatment and judge the prognosis. At present, the gold standard for diagnosis of IBD and accurate judgment of disease activity are mainly endoscopy and biopsy. However, as an invasive examination, it is time-consuming, expensive and risky. It is difficult to evaluate the disease activity of patients by repeated endoscopic examination. CRP and ESR were used to evaluate the activity of IBD disease, but the sensitivity and specificity were not high[7-10]. Disease activity index is also commonly used to evaluate the activity of IBD, but many scoring items depend on the subjective judgment of patients and doctors[6,12].Therefore, a convenient, economical and reliable marker is needed to monitor the activity of IBD. Fecal calprotectin is the most widely used marker for IBD for evaluating intestinal inflammation and mucosal healing. The present study focused on the detection of calprotectin in stool and serum samples, aIso examined the immunohistochemical localization in colon specimens.

Calprotectin is the main protein in neutrophils and macrophages, and it is an inflammatory marker[13]. After inflammatory stimulation, neutrophils and macrophages can release calprotectin [14-16]. In liver disease and autoimmune disease, calprotectin is significantly related to the severity of the disease, and can predict the prognosis and recurrence of the disease[17-19]. When there is inflammation in the gut of IBD patients, a large number of inflammatory cells in the gut, especially neutrophils, can release a large amount of calprotectin into the intestinal cavity mucosa. Therefore, the level of calygin in the intestinal mucosa is related to the inflammation of the gut[20]. Numerous studies have shown that the level of fecal calprotectin is related to the intestinal endoscopic performance of IBD patients, which can be used to evaluate the therapeutic efficacy and predict recurrence in IBD patients[21-23]. Previous studies have shown that the serum calprotectin level in rats with intestinal inflammation is increased, and it is associated with macro and micro disease activity score[24]. Kalla et al. have shown that serum calprotectin can be used for the diagnosis of IBD (Area under the curve-AUC=0.87, 95 % CI: 0.78-0.97). Meanwhile, combined with serum calprotectin and CRP or albumin indicators, a scoring system has been established, which can predict the progression of treatment or surgery in patients with CD[25]. In addition, serum calprotectin can predict the recurrence of CD patients after withdrawal of anti Tumor Necrosis Factor (TNF) drugs[26], and judge the prognosis of patients with severe UC[27].

CRP and ESR are commonly used clinical reference indexes in judging IBD activity. We detected the changes of SCP and CRP in different stages of IBD, and found that compared with remission stage, the levels of SCP in mild, moderate and severe active IBD groups were higher (p<0.01); there were statistically significant differences in SCP and CRP between different stages of IBD activity group (p<0.01), and the levels of SCP and CRP were gradually increased with the increase of IBD grade. CRP and ESR had certain sensitivity and specificity (CRP: sensitivity 73.2 %, specificity 90.8 %; ESR: sensitivity 65.9 %, specificity 86.1 %), significantly lower than SCP. CRP and ESR are less sensitive than SCP, which may be due to the long halflife of CRP, susceptibility to age, anaemia, smoking and other factors, and ESR is susceptible to the influence of cholesterol, globulin and albumin in serum. Therefore, SCP is superior to the first two blood indexes in judging IBD activity, and has higher intestinal sensitivity and specificity.

In conclusion, the activity of IBD can be judged by serum calprotectin level, which has the characteristics of economy, convenience and less pain. For IBD patients who refuse to re-examine enteroscopy repeatedly, the activity of IBD can be preliminarily evaluated by detecting serum calprotectin level. Further exploration and verification can be applied to clinical application.

This work was supported by The Second Affiliated Hospital of Soochow University, Rui Dong Chen and Yun Yun Hu contributed equally to this work.