In order to study the clinical efficacy of fluorouracil administered as a prodrug tegafur in combination with gimeracil and oteracil potassium (S-1) in the postoperative treatment of gastric cancer, in this study, 308 patients with clinically diagnosed gastric cancer and radical gastrectomy were followed up for data collection. The 308 patients were divided into treatment group and control group, and treated according to the experimental design. The data obtained was analysed, subjected to Χ2 test using SPSS20.0 software and the survival rate was calculated by Kaplan-Meier. The median was used to represent the survival time. The single factor analysis was performed by log-rank test. Multiple-factor analysis was performed using Cox analysis. Finally, the adverse reactions of patients with oral administration of S-1 were counted, and the clinical efficacy of the S-1 in the radical resection of gastric cancer was evaluated. The results showed that the median progress free survival of the treatment group and the control group were 7.7 and 5.4 months, respectively, and the median overall survival was 12.1 and 10.0 months, respectively (P>0.05). Adverse reactions were mainly manifested in hand-foot syndrome, gastrointestinal symptoms, bone marrow transplantation and other systemic symptoms. The study appeared to be of great significance in selecting treatment options for prolongation of survival time in patients after radical gastrectomy.

Gastric cancer refers to one of the malignant neoplastic diseases in which epithelial cells of the gastric mucosa become cancerous. According to statistical analysis of relevant reports, gastric cancer is currently one of the four major tumors in the world, and its mortality rate is very high, ranking second in the mortality rate of neoplastic diseases[1]. In China, the number of deaths from gastric cancer is the second highest among all deaths due to malignant tumors, and the number of deaths due to gastric cancer is nearly 498 000. According to medical statistics, more than two-thirds of people are already in advanced stage when they are found or confirmed to have gastric cancer. As a consequence, many people have missed the best treatment time and lost the opportunity to prevent further spread of the disease through surgery[2]. Even though many patients with gastric cancer have not missed the opportunity for surgery, after surgery, about 69 % of patients with gastric cancer will have lesion metastasis and recurrence. In order to prolong the life of patients with advanced gastric cancer, the most common means of therapy is chemotherapy[3]. However, there is currently no uniform standard of treatment for chemotherapy. Most of the single drugs used in chemotherapy for gastric cancer are mainly confined to cisplatin, anthracyclines, fluorouracil and mitomycin C. However, the therapeutic efficiency of these drugs alone is very low and in order to improve the therapeutic effect during the postoperative stage of gastric cancer, many researchers began to study the therapeutic effect of two or more drugs in combination. The commonly used drugs are Taxol, platinum and fluorouracil[4,5].

At present, the main therapeutic drug for patients with advanced gastric cancer is fluorouracil single drugs. Among them, the most commonly used are capecitabine and tegafur/gimeracil/oteracil potassium (S-1)[6,7]. Capecitabine is a novel fluorouracil nucleoside analog, which is selectively active in tumor cells, the drug has the advantages of convenient to administer and relatively fewer adverse reactions. Clinical studies have shown that capecitabine can prolong the survival of patient. Tegafur/gimeracil/oteracil potassium (S-1) is a compound preparation of tegafur with gimeracil and oteracil potassium. In the course of use, it can reduce the gastrointestinal discomfort of patients. At present, a large number of patients with advanced gastric cancer have been treated with S-1 at home and abroad[8-10].

Case analysis of the research subjects:

The selected research subjects in this study were patients clinically diagnosed as gastric cancer, and after radical surgery, fluorouracil chemotherapy regimen was used to control patient's condition, and the sample set comprised of 450 cases. Among them, 165 patients were given single drug treatment with either capecitabine or S-1, and a total of 130 patients with complete data were obtained. Patients who underwent radical surgery without continued chemotherapy were labeled as a control group with a total of 230 patients. The selection of the sample set was based on overall consideration of the three factors, the gastric cancer TNM staging method, the gender and age of sample. In order to ensure the comprehensiveness of the sample set and the validity of the research results, the inclusion criteria for gastric cancer patients at the time of sample set selection are shown in Table 1. The standard conditions for the removal of the above samples are shown in Table 1. This study required the removal of cases that did not meet conditions specified in Table 1.

In this study, a total of 360 valid clinical data sets were collected. According to the requirements of this study, the sample data was divided into two study groups. The number of samples selected in the first group was 165 (the treatment group), and the selection criteria were patients with intraoperative implantation of fluorouracil implants. The number of samples selected in the second group was 230 (control group), and the selection criteria was whether oral S-1 was administered during surgery. Preoperative data of patients in the two groups of samples are shown in Table 2.

Table 2: Reoperative indicators of the two groups of patients (X±SD)

The preoperative index items of the two groups of patients, WBC, ANC, HB, PLT, AST, ALT, CysC, TBIL, RBP, BUN, CRE, CEA, CA19-9 and CA72-4 were compared at a p>0.05 level of significance, so according to the level of testing, there was no significant difference in the selection of samples between the two groups of samples.

Experimental materials and methods of use:

In the research of this study, oral capecitabine and S-1 were administered to patients in the maintenance treatment group. The dosage, method of administration and time of administration of the two drugs are shown in Table 4.

Table 4: Experimental materials and methods of use

The observation indicators in this study were the median progress free survival and median survival with disease progression, median overall survival (mOS), 1-y survival, 2-y survival rate, adverse reactions with capecitabine and S-1. The above indicators were used to analyze the relationship between the clinical pathological features of patients and the prognosis of maintenance treatment. Progress free survival (PFD) refers to the period from the onset of chemotherapy until the disease progress is observed or the death of any cause occurs[11,12]. Overall survival (OS) refers to the period of time from the start of treatment to the death of the patient and has long been alive at the end of follow-up[13,14].

The follow-up period of this study was 2 y, and the deadline for postoperative follow-up was December 2018. By reviewing through the cases, patients with evolutionary chemotherapy were visited every three months, each visit to determine the outpatient review and determine survival. Because of changes in the patient's home address and changes in the mobile phone, 8 cases were lost.

According to the needs of this study, a total of 408 cases of this study were selected by screening the hospital cases. After chemotherapy, 138 cases agreed with maintenance treatment. Due to the loss of 8 patients during the follow-up, 130 samples were collected. In this study, patients who underwent chemotherapy but did not choose to continue treatment were referred to as the cessation treatment group. Data from patients with missing follow-up were excluded, and a total of 230 patients were collected in the cessation treatment group.

A total of 360 samples were studied, with 130 patients in the maintenance treatment group and 230 patients in the cessation treatment group. The pathological features in the sample data were, gender, age, histological grade, radical operation of gastric cancer, WHO pathological classification, number of metastases, liver metastasis, and number of induction chemotherapy cycles. In the maintenance treatment group, there were 99 males and 31 females. The age distribution was mainly concentrated in 18 to 80 y old, 67 cases less than 60 y old, and 63 cases older than 60 y old. There were 57 cases of recurrence after radical gastrectomy and 73 cases did not undergo radical surgery. There were 115 cases of adenocarcinoma and 15 cases of cell carcinoma. The cases with 1-2 of metastases were 98 cases, and the cases with more than 3 metastases were 32 cases. There were 23 cases with 2 to 3 induction chemotherapy cycles, 35 cases with 4 to 5, and 72 cases with more than 6 induction chemotherapy cycles. The clinical characteristics of the sample data are shown in Table 5.

Table 7: Univariate survival analysis of clinical data in patients in the treatment group

In this study, the clinical case characteristics were used as independent variables, and the PFS and OS of the patients in the sample were used as the dependent variables. Cox multivariate analysis was performed to analyze the independent influencing factors affecting patients' PFS and OS. The results are shown in Table 8, and the calculated number of liver metastases and metastases are shown in figs. 1 to 3. 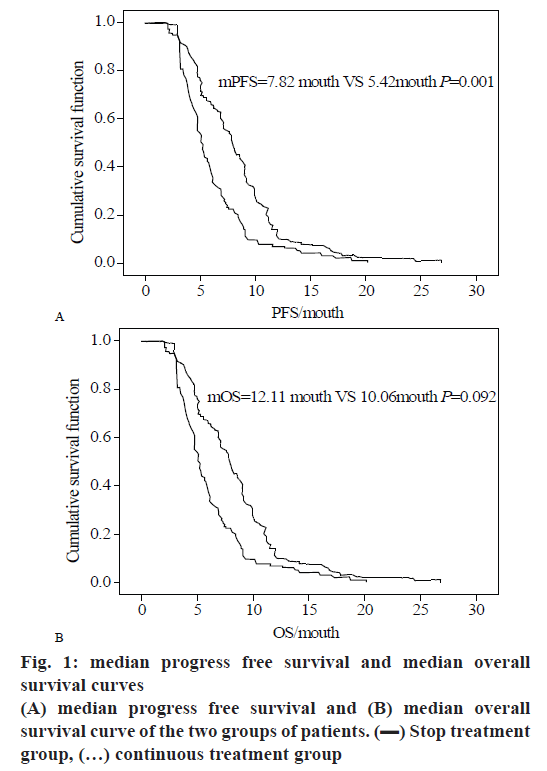 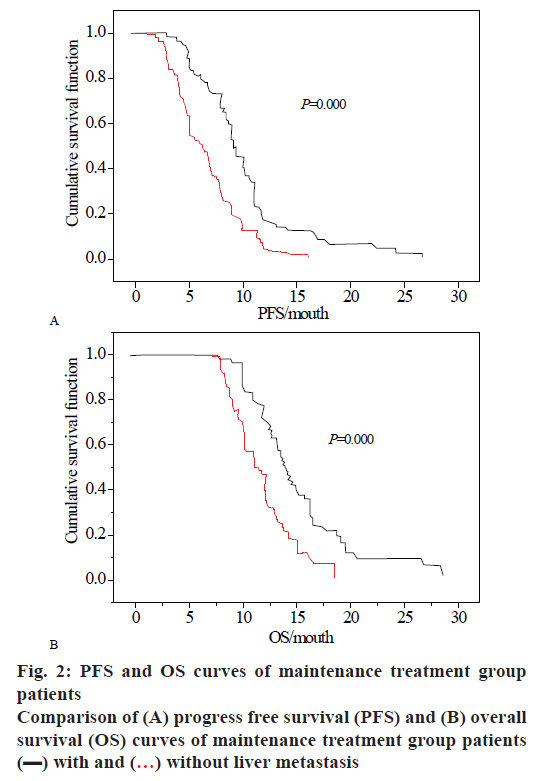 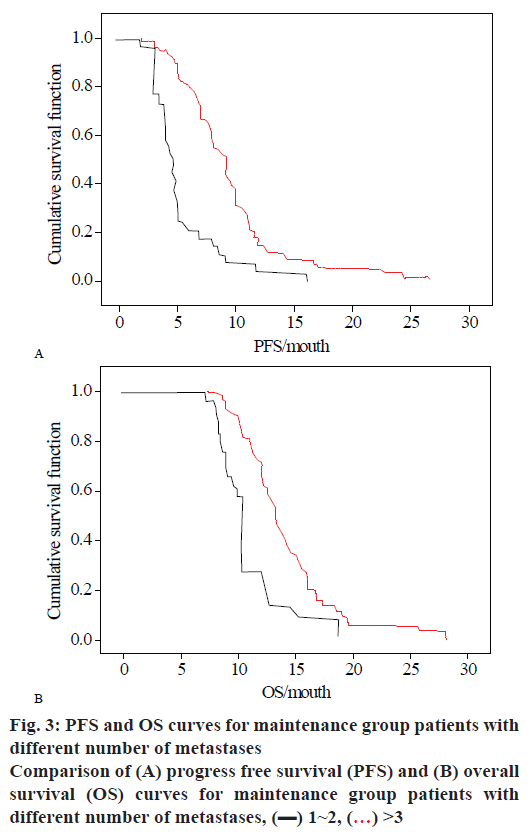 In this study, 308 patients with clinically diagnosed gastric cancer and radical gastrectomy were followed up for data collection. The 308 patients were divided into treatment group and control group, and treated according to the experimental design. Subsequently, the statistical data SPSS20.0 was used to analyze the data samples, then the Χ2 test was performed on the data, and the survival rate was calculated by Kaplan- Meier. The median was used to represent the survival time. The single factor analysis was performed by logrank test. Multiple-factor analysis was performed by cox analysis. Finally, the adverse reactions of patients with oral administration of S-1 were counted, and the clinical efficacy of chemotherapy with S-1 in the radical resection of gastric cancer was evaluated. From the results obtained, it was found that three factors influence median progress free survival and overall survival of gastric cancer patients (with or without liver metastasis, number of metastases, and number of induction chemotherapy cycles) were all independent factors. Patients who have undergone radical gastrectomy can effectively delay the recurrence and metastasis of the disease after using chemotherapy with S-1 for a period of time, and the survival rate improved for nearly 1 y. Adverse reactions were mainly manifested as handfoot syndrome, digestive system symptoms, bone marrow transplantation, and other systemic symptoms, but were tolerated by the patient. It can be concluded from this study that the clinical effect of chemotherapy drugs after radical gastrectomy has certain progress. This finding is of great significance for the treatment of patients after radical gastrectomy.