Clinical Outcome of Pretreatment with Mifepristone before Laparoscopic Myomectomy

Hysteromyoma, also known as fibromyoma or uterine fibroids, is a common benign tumor of the female reproductive organ, which is also a most common type of tumor. Because hysteromyoma are mainly formed by the proliferation of uterine smooth muscle cells, in which a small amount of fibrous connective tissue exists as a supporting tissue, so it is also called uterine leiomyoma[1]. The etiology of hysteromyoma is still unclear, which may involve cell mutations in normal muscle layers or complex interactions between sex hormones and local growth factors. Based on clinical observations and studies it is understood that hysteromyoma is a kind of hormone-dependent tumor[2-4]. Laparoscopic myomectomy has been widely used clinically and the results are generally positive. The removal of hysteromyoma, an ultrasound image of which is shown in fig. 1, not only preserves women’s fertility, but also keeps their reproductive organs intact to maintain its normal physiological functions. If the hysteromyoma was large, the risk of blood loss during surgery would increase, thus increasing the difficulty of surgery. Therefore, some patients would need to switch to open surgery, thereby adding to the risk of surgery[5,6]. Mifepristone is an antiprogestogen drug, pretreatment with which before laparoscopic myomectomy could reduce the volume of hysteromyoma and control intraoperative bleeding. This study observed and analyzed the clinical outcome of pretreatment with mifepristone before laparoscopic myomectomy, which is reported as follows.

Figure 1: Ultrasound image of a hysteromyoma Figure 2: Images of hysteromyoma in a patient

Data obtained from both groups were comparable. All patients underwent laparoscopic myomectomy with the following steps, general anesthesia, Trendelenburg bladder lithotomy position, CO2 pneumoperitoneum, 3 or 4 puncture holes were placed in the patient’s abdominal wall and then the laparoscope and the surgical instruments were placed. Then the laparoscopic exploration was performed; vasopressin (12 U) was injected into the uterus muscle; the tumor was removed, and electrocoagulation was used to stop bleeding; the tumor cavity was sutured, the abdominal cavity was irrigated with saline, the pneumoperitoneum was evacuated, the surgical instruments were removed and the puncture holes on the abdominal wall were sutured. In addition, the patients in the research group were treated with a daily dose of 12.5 mg mifepristone tablets (Shanghai Xinhualian Pharmaceutical Co., Ltd., H20000629) continuously from the d 1 of menstrual cycle for 3 consecutive months,. During the medication, the patient’s physical condition was closely observed. And the medication was stopped timely if there were any abnormal problems.

The surgical time, blood loss, intraoperative blood transfusion rate, post-operative hemoglobin levels and the mean hospital stay were observed and compared. Meanwhile, visual analogue scale was adopted to evaluate the degree of pain after surgery. Also, the short-term effect was compared. Nottingham Health Profile (NHP) was used to assess quality of life. Statistical analysis was performed using SPSS21.0. All quantitative data were expressed in the form of mean±standard deviation and comparisons were made using the t-test. Enumeration data were expressed in the form of natural number (n) + percentage (%), and comparisons were made with chi-square test. P<0.05 represents the intergroup difference was of statistically significance. 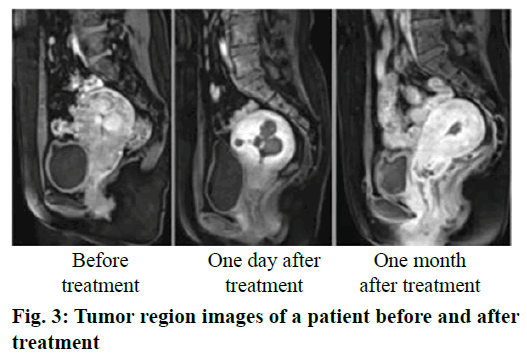 Figure 3: Tumor region images of a patient before and after treatment

Table 1: Comparison of Surgical Indices between Both Groups

Table 2: Comparison of Post-Operative Pain Scores and Short-Term Effect Between Both Groups

Table 3: Comparison of Qulality of Life Between Both Groups

Results of this study indicated that a comparative evaluation indices such as of the surgical time, blood loss and intraoperative blood transfusion rate, the research group indices were significantly better than those of the control group (p<0.05). Moreover, the post-operative pain scores of the research group were significantly lower than that of the control group (p<0.05). Also, the average diameter of hysteromyoma in the research group was 5.6±2.0 cm before mifepristone pretreatment, while the average diameter of the hysteromyoma after mifepristone pretreatment was 3.0±1.0 cm. These results agree with recent findings[9-13]. To sum up, laparoscopic myomectomy has been widely used in clinical surgery, but the risk of blood loss during surgery would be increased if the hysteromyoma was large, thus increasing the difficulty of surgery. Pretreatment with mifepristone before laparoscopic myomectomy can significantly decrease the tumor diameter, reduce intraoperative blood loss and blood transfusion rate, which is of important clinical value. As a novel antiprogestin drug, mifepristone can effectively block the binding of progesterone receptor with progesterone, thereby preventing the growth of uterine fibroids. Mifepristone pretreatment of large hysteromyoma can effectively reduce the tumor volume, decrease intraoperative blood loss, shorten surgical time and broaden surgical indications, which has enormous application value. The sample size of this study is limited and the results of this study need more research to support it and to better promote the application of this surgery, in an effort to obtain better therapeutic results for patients with hysteromyoma.