The antibiogram study of methicillin resistant Staphylococcus aureus isolates revealed 100% resistance to vancomycin, bacitracin, erythromycin, ciprofloxacin and nalidixic acid. Eight isolates (53.3%) showed resistance to co-trimoxazole and one isolate to rifampicin, which was the drug of choice. An effort was made to evaluate the antimethicillin resistant Staphylococcus aureus activity of silver oxide (Ag 2 O) nanoparticles synthesized from Aspergillus terreus VIT 2013. Production of Ag 2 O nanoparticles was confirmed by color change of fungal filtrate and UV light absorption at 450 nm. X-ray diffraction pattern showed 2θ values at 27, 32, 38 and 57°, which corresponded to the cubic structure of Ag 2 O nanocrystals. Fourier transform infrared spectroscopy indicated the presence of primary amine, carbonyl group, NO 2 and silver, revealing protein mediated nanoparticle production. The scanning electron microscope image showed freely dispersed Ag 2 O nanoparticles. The nanoparticles were active against all methicillin resistant isolates and hence can be used as antibacterial agents against drug resistant bacteria.

Drug resistance of bacteria is a worldwide problem, which requires a continuous effort for eradication. In spite of their emergence in the hospital settings, they are also noticed in important parts of the community like drinking water, food, animals and their meat. Resistant isolates from animals and their products are directly transferred to the human beings either by direct contact with animals or from water, feed and waste associated with their farms [1,2]. Nosocomial infections, caused by drug resistant isolates, are a major problem as it requires costly treatments and long stay in hospitals. Patients with drug resistant infections will have less choice of drugs for treatment. Increased epidemiology of drug resistant isolates is a serious problem, which needs to be urgently tackled. In addition to the traditional remedies using plants, fungal extracts to cure these diseases have been reported. Many nanoparticles have also been cited to be active against drug resistant bacteria [3,4]. Colloidal silver nanoparticles of size 1‑10 nm are used as magic bullets for targeting GP120 of human immune deficiency virus, thereby inhibiting the viral entry [5] Nanoparticles form efficient electron transferring agents between borohydrate and dye and therefore are widely used as catalysts [6].

Clinical pathogens collected from Narayani hospital, Vellore, were subcultured and used for antibiotic susceptibility studies. Antibiotic susceptibility test was performed by disc diffusion method following Clinical and Laboratory Standards Institute (CLSI) guidelines [10]. Sterile Muller Hinton Agar plates were prepared, on which a lawn of MRSA was spread. With the help of sterile forceps, antibiotic discs were placed in plates. Plates were incubated at 37° for 24 h. After the incubation, plates were observed for the zone of inhibition around the discs. The results of antibiograms were interpreted using CLSI chart. Antibiotics were selected based on their mode of action and the following antibiotics were used (μg/disc); rifampicin (RIF)‑5, vancomycin (VAN)‑30, bacitracin (BAC)‑10, Co‑trimoxazole (CO)‑25. erythromycin (ERY)‑10, ciprofloxacin (CIP)‑10 and nalidixic acid (NA)‑30.

The fungus isolated from soil was inoculated in the sterile medium containing the following ingredients (g/l): KH2PO4‑7.0; K2HPO4‑2.0; MgSO4.7H2O‑0.1; (NH4)2SO4-1.0; yeast extract‑0.6 and glucose‑10.0. The fungus was incubated at room temperature (30°) for eight days. On the ninth day, 10 g of fungal mat was filtered, washed thrice with Milli Q water and reinoculated in 100ml of Milli Q water for 72 h. Subsequently, the fungal filtrate was collected for the production of Ag2O nanoparticles which were synthesized in the dark by adding 0.1 mM AgNO3 to the fungal filtrate, after which the flask was incubated in a dark room. Two flasks, one with only 0.1 mM AgNO3 solution and other containing fungal filtrate alone, were kept as experimental controls for which similar conditions were maintained as that of the test flask.

Biosynthesis of Ag2O nanoparticles was monitored at various time intervals by scanning the test filtrate and control from 300‑600 nm with UV spectrophotometer. UV readings were taken until maximum absorption was obtained. For further characterization, Ag2O nanoparticles were washed thrice in Millli Q water, to remove fungal secondary metabolites and characterized by XRD, SEM and FTIR.

Antibacterial activity of Ag2O nanoparticles were assessed by well diffusion method using CLSI guidelines [10]. The lawn of bacterial inoculum was prepared on sterile Mueller Hinton Agar and wells were made. In each well, 100 μl of Ag2O nanoparticles were added and plates were incubated at 37° for 24 h, after which the zone of inhibition was measured. All measurements were done in triplicate.

The present study mainly focuses on understanding the drug resistance pattern of methicillin resistant Staphylococcus aureus (MRSA) in hospital settings and controlling them using antiMRSA Ag2O nanoparticles, biosynthesized from a soil fungus, Aspergillus terreus VIT 2013. Fifteen clinical isolates of MRSA were collected from a hospital in Vellore District of Tamil Nadu, India and their drug resistance patterns were studied. A high level of resistance was observed among many of these clinical isolates. All isolates were found to be 100% resistant to vancomycin, bacitracin, erythromycin, ciprofloxacin and nalidixic acid. Resistance to vancomycin and ciprofloxacin in MRSA isolates have increased in recently in comparison to previous years wherein it was found to be 35.3 and 76.4%, respectively [12,13]. In contrast, resistance to co‑trimoxazole was found to be reduced from 82.3% as reported in 2013, to 53.3% (8/15 isolates) as observed in the present study [13]. Rifampicin was found to be a drug of choice, as most of the isolates except one (6.6%) were sensitive to it as is shown in Table 1. Three antibiotic resistance patterns were expressed by all fifteen isolates of MRSA in which 40% isolates were resistant to five antibiotics and 53.3 and 6.6% were resistant to six antibiotics. The results are represented in Tables 2 and 3.

Each isolate was resistant to more than one antibiotic, thus showing high versatility of drug resistance among nosocomial MRSA. Since drug resistance is disseminating at a rapid pace, it should be of serious concern for prevention and control of diseases caused by them. Nanotechnology is one of the promising areas to battle the drug resistance scenario. Silver‑carbon complexes, nitric oxide releasing nanoparticles and other multifunctional nanoparticles have been reported to have strong antibacterial activities against drug resistance bacteria [14]. Antibacterial Ag2O nanoparticles synthesis, by soil fungus Aspergillus terreus VIT 2013 was carried out and the presence of Ag2O was confirmed through the characteristic color change in the fungal filtrate, from colorless to brown, upon addition of AgNO3. The color change was noticed within one hour of addition of the substrate. No change in color was observed in the remaining two conical flasks containing only fungal filtrate and 0.1 mM AgNO3 solution, which served as controls (fig. 1a). Test solution, when scanned from 300-600 nm showed strong UV peak absorption at 450 nm. The optical density (OD) value of each successive recording at 450 nm was approximately doubled which signified increased synthesis of Ag2O nanoparticles (fig. 1b). In contrast to Ag2O nanoparticles, silver (Ag°) nanoparticles absorbs light at 420 nm as observed in our previous study, thus clearly indicating a difference in UV absorption spectra of two nanoparticles [15‑17]. 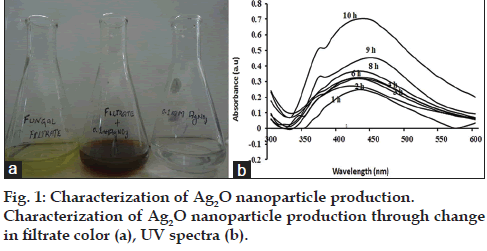 Along with the peak at 450 nm, a second peak at 360 nm was also observed which corresponds to the production of inorganic phosphate [18]. This indicated that the production of Ag2O nanoparticles and inorganic phosphate may be simultaneous and an interlinked process as in each UV recording, the OD value of the peak at 450 nm was accompanied by OD value of peak at 360 nm. Our previous study on silver nanoparticles production by Aspergillus niger also revealed a similar mechanism [15]. The comparative results with other species revealed that the mechanism operates only in the Aspergillus Spp. which produces silver or silver oxide nanoparticles.

The result of XRD analysis of Ag2O nanoparticles revealed that the diffraction peaks in the XRD pattern matched with Ag2O of JCPDS file no 42‑0874 (fig. 2). The XRD peaks, 110, 111 are the main indictors of Ag2O nanoparticle production, and the peaks, 211, 220 corresponded to the plane of face centered cubic crystal structure [16,19]. 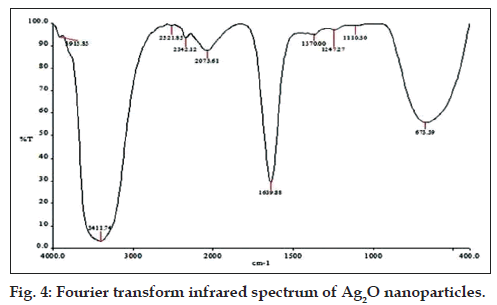 The Ag‑O interaction was found by observation of a peak appearing at 673 cm‑1 [22]. Ag2O nanoparticles showed strong antibacterial activity against MRSA with a zone of inhibition of 17.6±0.5 mm (results of triplicate readings) and this value excludes the well diameter of 6 mm. No zones of inhibition were seen for filtrate, AgNO3 and a combination of both. These observations are shown in fig. 5. The results indicate that Ag2O nanoparticles could definitely form a first line of defense against MRSA infections. It would be interesting to study the inhibitory action of these oxide nanoparticles on other pathogenic and infectious bacteria like Mycobacterium tuberculosis.