Topical therapy is one of the attractive modes for the management of the cutaneous infections. Advantages of these delivery systems are; it releases drug to the site of infection and minimization of the risk of systemic side effects. Conventional dermatological products typically provide active ingredients in relatively high concentrations but with a short duration of action. This may lead to a cycle of short term overmedication followed by long-term under medication. Due to this, conventional dermatological products have drawbacks like rash, irritation, itching, redness, allergic reaction. The need exists for system to maximize the amount of time that an active ingredient is present either on skin surface or within the epidermis, while minimizing its transdermal penetration into the body [1,2].

Microsponges are polymeric delivery systems consisting of porous microspheres of an inert polymer that can entrap active ingredients and control their release rate. Microsponges are true sponge like spherical particles containing a large number of interconnecting voids within a non-collapsible structure with large porous surface. Because of interconnected void spaces microsponges get large surface area to hold drug. Microsponge technology allows an even and sustained rate of release, reducing irritation while maintaining efficacy [1,2]. Microsponge can be prepared with two methods i.e. one step process (liquidliquid polymerization method) and two-step process (quasi emulsion solvent diffusion method) [1,2]. Most common and feasible method used for preparation of microsponge is quasi emulsion solvent diffusion method [3].

Terbinafine HCl microsponges were prepared by the quasi emulsion solvent diffusion method. The organic internal phase dichloromethane (DCM) containing terbinafine HCl and ethyl cellulose were gradually added into distilled water (external phase) containing polyvinyl alcohol (PVA) as an emulsifying agent. The mixture was stirred on digital mechanical stirrer at 1000 to 1800 rpm for 60 min in order to remove DCM. The formed microsponges were filtered through Whatman filter paper, dried at 40° and weighed.

Effect of different weight ratios of drug to ethyl cellulose on actual drug content (ADC), particle size and entrapment efficiency of microsponges was determined. Further, Box-Behnken design was adopted to optimize the amount of internal solvent volume (5, 10 and 15 ml), emulsifier concentration (400, 500 and 600 mg) and effect of stirring rate (1200, 1500 and 1800 rpm) as the independent variables affecting the particle size, entrapment efficiency and ADC.

Weighed sample of terbinafine microsponges were dissolved in ethanol under ultrasonication for up to 1 h. The sample was filtered and absorbance was recorded at 283.5 nm using UV spectrophotometer after suitable dilution with water. The drug content and entrapment efficiency [10-12] were calculated using Eqns., ADC (%) = Mactual/Mmicrosponge×100; entrapment efficiency (%) = Mactual/Mtheoretical×100, % drug loading = (mass of drug in microsponges/mass of microsponges recovered)×100 [13], where, Mactual is the actual terbinafine content in weighed quantity of microsponges, Mmicrosponge is the weighed quantity of powdered microsponges and Mtheoretical is the theoretical amount of terbinafine in microsponges calculated from the quantity added in the process. The particle size was determined using an optical microscope with Pixel Pro software. The average particle size was expressed in terms of micrometre (μm). Microsponges were mounted on slide and placed over stage of microscope. Each determination was carried out on a minimum of 100 particles and their mean was reported [14,15].

Gel forming polymer Carbopol 940 (0.25 %) was soaked in distilled water for 2 h and then dispersed by agitation with digital mechanical stirrer to get a smooth dispersion. The resultant viscous solution was neutralized up to pH 7 by triethanolamine with slow agitation. Prepared terbinafine microsponges (equivalent to 1 % W/W terbinafine HCl) were added into Carbopol gel with continuous stirring to get terbinafine microsponge gel (TBFMG) [9].

TBFMG was evaluated for pH using digital pH meter (Equip-Tronics model EQ-614). Spreadability was determined with wooden block and glass slide apparatus by placing excess amount of sample between two glass slides [9,16-18]. One kilogram weight was placed on the slide for 5 min to get uniform thickness. After addition of weight to the pan, length travelled on the glass slide and time required to separate the slides was measured. Spreadability was calculated as follows, S = WL/T, where, S= spreadability, W= weight added in pan, L= length travelled on the glass slide, T= time taken by slides to separate completely from each other. Viscosity of prepared gel was measured by Brookfield viscometer (DV-II +Viscometer) at a room temperature. Gel sample was placed in the sample holder and the viscosity was measured by inserting spindle in sample with rotating speed of 50 rpm at room temperature.

In vitro release studies were performed using artificial cellophane membrane (molecular weight 12 000) and vertical Franz diffusion cell having 2.5 cm2 area and 15 ml receptor compartment capacity [3,9,12]. The artificial membrane was carefully placed between the two halves of the diffusion cell. The receptor compartment contains phosphate buffer (pH 5.8), its temperature was maintained at 37±0.5° and stirred continuously using magnetic stirrer. A predetermined amount of TBFMG containing 10 mg of terbinafine HCl was placed on the donor side over cellophane membrane. One ml of the sample was withdrawn from the receptor compartment at definite time intervals for 8 h and replaced with equal volume of fresh receptor fluid. The aliquots were suitably diluted with the receptor medium and analysed by UV spectrophotometer. The release of TBFMG was compared to terbinafine marketed cream (TBFMC, 1 % w/w).

The ex vivo diffusion study was performed on excised Wister rat skin [3]. The abdominal skin of rat was shaved, carefully placed on the Franz diffusion cell with the epidermal side facing the donor compartment and the dermal side in contact with the receptor solution. Receptor compartment of the diffusion cell was filled with phosphate buffer pH 5.8 with continuous stirring. Sample was applied to donor compartment. Diffusion cell was dismantled after 8 h. The skin was removed carefully and washed with distilled water to remove gel present on skin surface. Skin was chopped to small pieces and homogenized with 10 ml methanol and diluted with phosphate buffer. Drug content in the extract was suitably diluted and absorbance was measured using UV spectroscopy. The ex vivo diffusion study was carried on excised Wistar rat skin according to the protocol approved by the Institutional Animal Ethics Committee.

Optimized formulation was evaluated for antifungal activity. The activity was tested against Aspergillus niger by cup plate method [5,16,19,20]. Fungal culture was inoculated in Sabouraud dextrose agar medium and uniformly poured into sterile petri dish. The agar medium was allowed to solidify. Under aseptic conditions, the optimized formulation gel, marketed gel, pure drug and placebo were inoculated by cup plate agar method and plates were incubated at 25° for 24 h. The zone of inhibition was measured.

Optimized batch of terbinafine microsponge gels were monitored up to 3 mo at 40±2°/75±5 % RH as per International Conference on Harmonisation guidelines. At the interval of 1, 2, 3 mo samples were withdrawn and tested for physical appearance, pH, viscosity and drug content. Stability study is necessary to predict the long term stability of formulation [3].

Formulation no. 8 was found to be satisfactory in terms of entrapment efficiency, active drug content and particle size. This optimized batch was subjected to further characterization studies and incorporated into Carbopol gel base.

Entrapment efficiency was found to be inversely proportional and particle size was directly proportional to quantity of emulsifier (PVA). The emulsifier employed (PVA) was non-ionic and molecules can associate away from the oil-water interface at higher concentrations. Such alternative hydrophobic region can dissolve some portions of the drug resulting in a reduction in entrapment efficiency as per Figure 1A [10,14].

The particle size was found to be inversely proportional to the stirring rate. At higher stirring rate, a vigorous, uniform, increased mechanical shear was imposed and this resulted in a rapid division of the formed droplets, which might have less chance of coalescing into bigger droplets as shown in Figure 2. This led to decrease in particle size with increasing stirring rate [14]. SEM of terbinafine HCl-loaded microsponges shown in Figure 2 revealed that the microsponges were uniform, spherical in shape and porous in nature. The pores were induced by the diffusion of the solvent from the surface of the microparticles. X-ray powder diffractogram of pure drug, ethyl cellulose is shown in Figure 3. Pure drug showed sharp endothermic peak indicating crystalline state while ethyl cellulose not showed sharp peaks indicating amorphous nature. Intensity of peaks was found to be decreased in microsponge, which confirmed that terbinafine HCl was entrapped in ethyl cellulose polymer [9]. Microsponge-loaded gel was white, smooth and homogeneous. The pH, viscosity and spreadability of formulation was found to be 7.1, 2976±1.52 cps and 21.3±0.03 gcm/s, respectively. 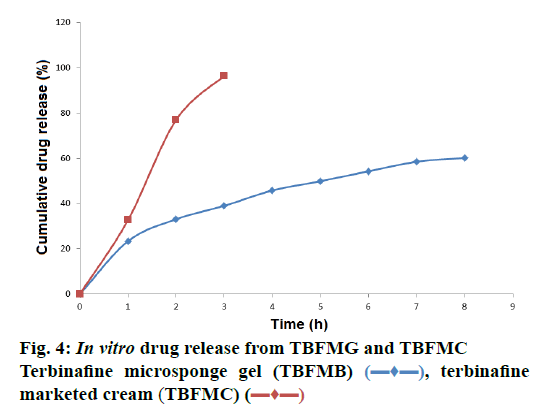 The diameters of zone of inhibition were found to be 19.34, 23.66 and 25.12 mm for microsponge gel, marketed gel and pure drug, respectively. Microsponge gel showed relatively small zone of inhibition which could be controlled antifungal activity due to controlled release of terbinafine HCl. The formulation inhibited the growth of A. niger, indicating that the formulation could be used to treat fungal infection.