A simple, precise, accurate and rapid high-performance thin-layer chromatographic method has been developed and validated for the estimation of atorvastatin calcium and ezetimibe simultaneously in combined dosage forms. The stationary phase used was precoated silica gel 60F254. The mobile phase used was a mixture of chloroform: benzene: methanol: acetic acid (6.0:3.0:1.0:0.1 v/v/v/v). The detection of spots was carried out at 250 nm. The method was validated in terms of linearity, accuracy, precision and specificity. The calibration curve was found to be linear between 0.8 and 4.0 µg/spot for atorvastatin calcium and 0.1 and 1.0 µg/spot for ezetimibe. The limit of detection and the limit of quantification for atorvastatin calcium were found to be 170 ng/spot and 570 ng/spot respectively, and for ezetimibe, 20 ng/spot and 70 ng/spot respectively. The proposed method can be successfully used to determine the drug content of marketed formulation. 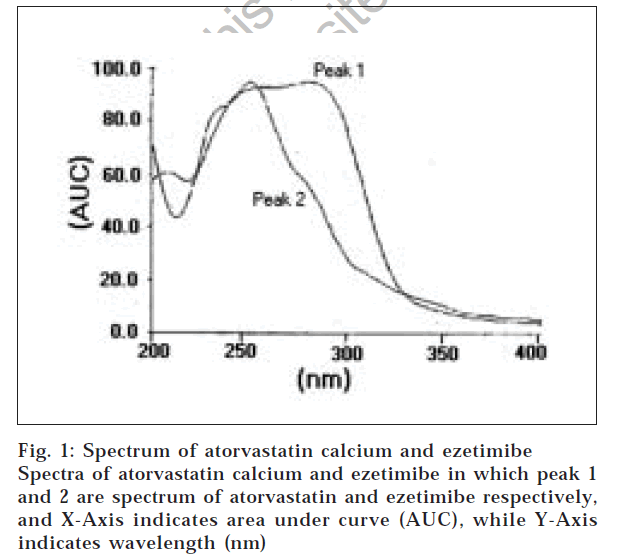 Aliquots of 0.8, 0.9, 1, 2, 3 and 4 μl of standard solution of atorvastatin calcium and 1, 3, 6, 8 and 10 μl of standard solution of ezetimibe were applied on the TLC plate. The TLC plate was dried, developed and analyzed photometrically as described earlier. The calibration curves were prepared by plotting peak area versus concentration (μg/spot) corresponding to each spot. The method was validated [11–13] by establishing linearity, accuracy, inter-day and intra-day precision, specificity, repeatability of measurement of peak, as well as repeatability of sample application. The limit of detection and limit of quantification were also determined. The related impurities were determined by spotting higher concentration of the drugs so as to detect and quantify them. 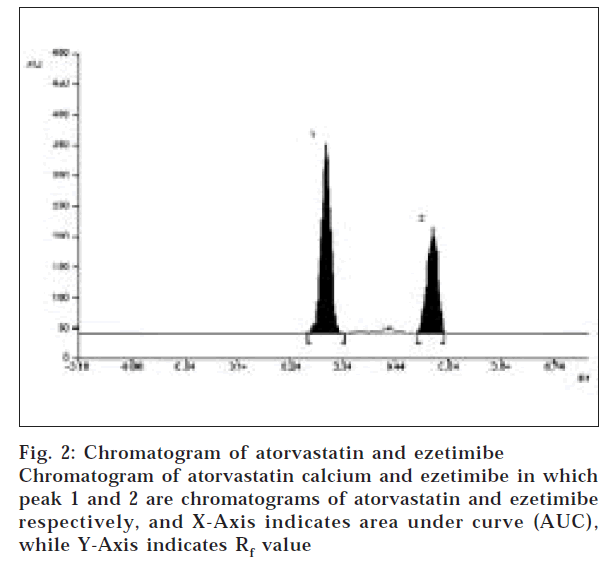 Repeatability of measurement of peak area was determined by spotting 2 μl of atorvastatin calcium and 5 μl of ezetimibe solution on a TLC plate and developing the plate. The separated spot was scanned five times without changing the position of the plate and % RSD for measurement of peak area of atorvastatin and ezetimibe was found to be 0.143 and 0.072 respectively. To confirm the specificity of the proposed method, the solution of the formulation was spotted on the TLC plate, developed and scanned. It was observed that the excipients present in the formulation did not interfere with the peaks of atorvastatin calcium and ezetimibe.

Recovery study of atorvastatin calcium and ezetimibe. *indicates that each value is a mean ± standard deviation of three determinations

The assay value for the marketed formulation was found to be within the limits, as listed in Table 3. The low RSD value indicated the suitability of the method for routine analysis of atorvastatin and ezetimibe in pharmaceutical dosage forms.

*Each value is mean of six determinations

The developed HPTLC technique is simple, precise, specific and accurate, and the statistical analysis proved that method is reproducible and selective for the analysis of atorvastatin and ezetimibe simultaneously in bulk drug and tablet formulations.