Obesity is a serious health problem and rapidly becoming a major challenge to health care systems worldwide [1]. Over the last three decades the prevalence of overweight and obesity has increased substantially [2]. By 2025, obesity will affect 18 % of men and over 21 % of women worldwide [3]. In some nations, obesity is already present in more than one-third of the adult population and contributes significantly to overall poor health and high annual medical costs [4]. This increasing prevalence of obesity has implications for coronary heart diseases, hypertension, diabetes mellitus, fatty liver, gall bladder disease, osteoarthritis, various cancers, mental disorders, and kidney diseases [5]. Numerous population-based studies have shown an interrelationship between obesity and of kidney disease. People who are overweight or obese have 2 to 7 times of developing renal diseases compared to those of normal weight [6]. A growing body of evidence indicates that obesity is also a potent risk factor for the development of chronic kidney disease and end-stage renal disease [7].

Renal diseases coexisting with obesity have become more predominant in the society due to changes in life style and dietary habits [8]. The number of people with kidney disease and obesity is substantial and the prevalence is increasing throughout the world [9]. Efforts should be directed to treating both the diseases together as a whole rather than independently by finding better novel therapeutic strategies for nephrotoxicity co-existing with obesity. In order to do so, appropriate and clinically relevant experimental models are necessary to test new drugs, understand the molecular basis and pathogenesis of the condition and mechanism of actions of these therapeutic agents. Thus to control these diseases, it is of paramount importance to establish such a unique animal model that closely mimic the changes subsequent to development of nephrotoxicity and obesity in humans. These viable animal models should address all the aspects of this human disease, developing all major signs of obesity as well as nephrotoxicity.

Male Wistar rats weighing 150-180 g were selected and a total of 33 animals were used for the study. The animals were supplied by Sri Venkateswara Enterprises, Bangalore. The experimental protocol was approved by the Institutional Animal Ethics Committee and carried out as per the guidelines of Committee for the Purpose of Control and Supervision of Experiments on Animals (Registration No.: 1677/PO/a/12/CPCSEA). The animals were housed in polypropylene cages with paddy husk bedding and maintained under standard laboratory conditions with controlled temperature 24±2° and relative humidity of 30 to 70 %, in an airconditioned room with 12:12 h light/dark cycle. The animals were allowed free access to standard rat chow or high-fat diet (HFD) as the case may be and water ad libitum.

Assessment of various parameters of obesity and nephrotoxicity

Body weight was monitored once every 5 d. The Lee’s index was expressed as a cubic root of body weight in g divided by the naso-anal length in millimetre multiplied by 104 [11]. At the end of the 40 d experimental session, urine was collected into metabolic cages and the urinary functional parameters were estimated. After 12 h starvation, blood was collected from retroorbital plexus and animals were sacrificed by cervical decapitation. Serum was separated and used for estimation of serum markers. The liver, kidney, spleen and fat pads (mesenteric and perirenal fat pads) were dissected out, washed in ice cold saline, blotted dry and weighed. Kidney and liver tissues were used for antioxidant and histological studies.

Atherogenic index (AI) of experimental rats was calculated using the formula, LDL-cholesterol/HDLcholesterol ratio while coronary risk index (CRI) was the ratio of total cholesterol to HDL cholesterol [14]. Kidney function markers such as blood urea nitrogen (BUN), serum creatinine (SC), urinary total protein (UTP) and creatinine clearance (Clcr) were determined by standard methods using commercial kits [15]. Liver and kidney were homogenized in ice cold phosphate buffer to obtain a 10 % (w/v) homogenate. The homogenates were centrifuged at 10 000 rpm for 15 min and the clear supernatant was obtained. Oxidative stress markers were assessed by determining the levels of lipid peroxidation (LPO), reduced glutathione (GSH), superoxide dismutase (SOD) and catalase (CAT), which were estimated in supernatant of both liver and kidney homogenate using standard procedures [16-19].

Kidney and liver was dissected, removed, washed with normal saline and fixed in 10 % neutral buffered formalin. The fixed specimens were then trimmed, washed and dehydrated in ascending grades of alcohol. The tissue specimens were cleared in xylene, embedded in paraffin, sectioned at 4-6 μ thickness and stained with haematoxylin and eosin [20].

The data was expressed as mean±standard error of the mean. Mean values between the groups was considered statistically significant (p<0.001) after analysing using one way ANOVA and was compared using Tukey- Kramer multiple comparison test.

Each value represents the mean ± SEM from 6 animals in each group. #p<0.001, ns: not significant, a: group-II, III and IV compared to group-I

Table 1: Change in body weight and Lee-index in experimental animals 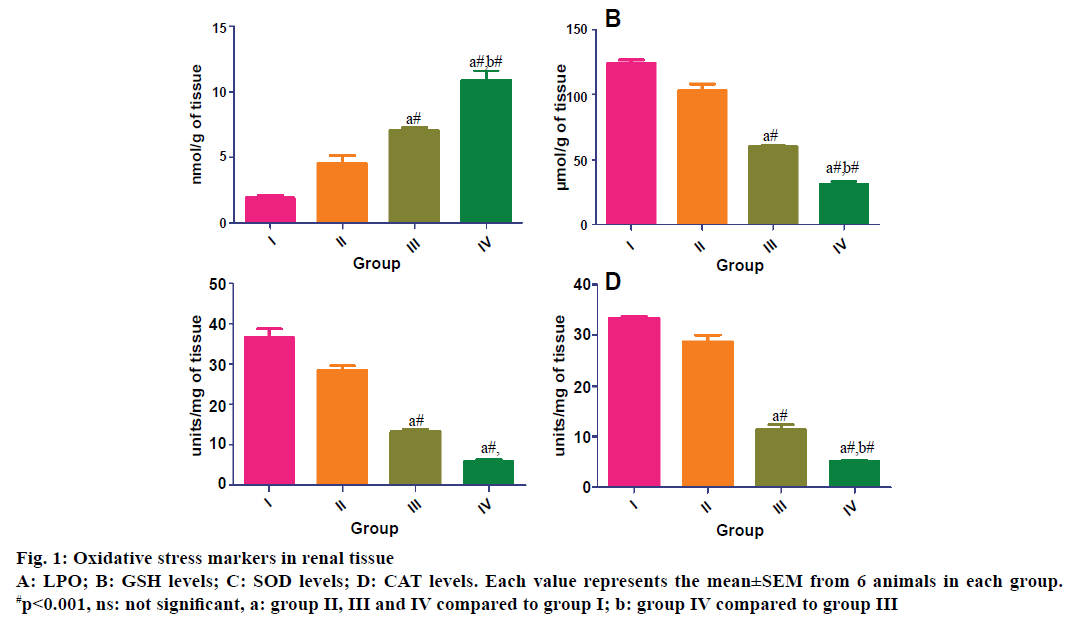 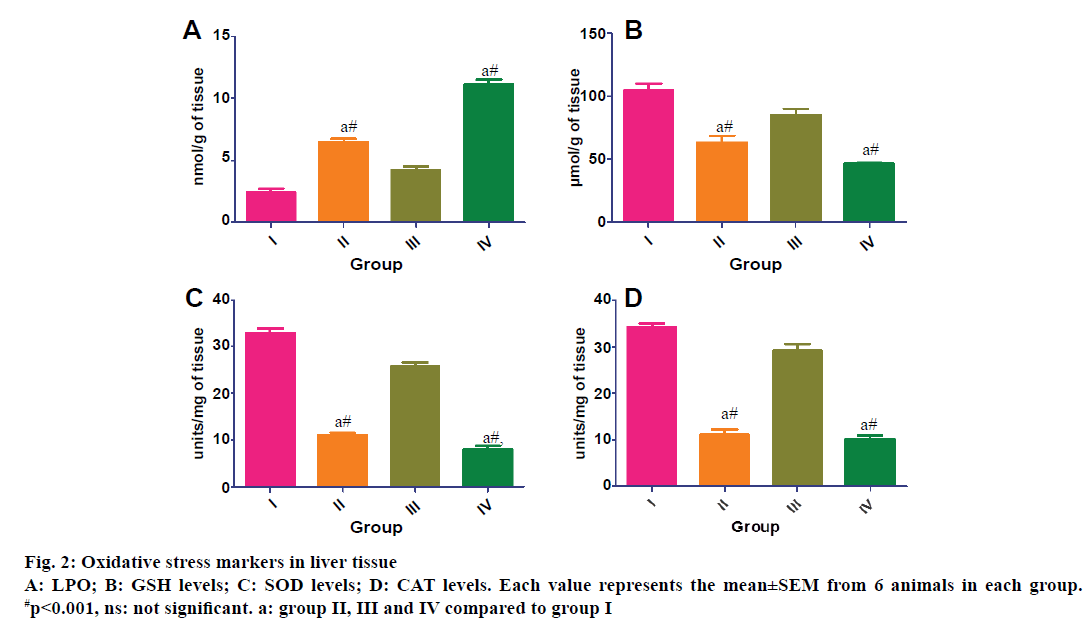 Figure 2: Oxidative stress markers in liver tissue
A: LPO; B: GSH levels; C: SOD levels; D: CAT levels. Each value represents the mean±SEM from 6 animals in each group.
#p<0.001, ns: not significant. a: group II, III and IV compared to group I Histological assessment of the liver of the normal control rats showed normal architecture of central vein, peripheral vein, and hepatocytes. In contrast, the liver cells of the group II and IV showed degeneration, congestion, and fat deposition as compared to normal control (Figure 3).

Obesity is defined as abnormal or excessive fat accumulation that may impair health [21]. It increased the probability of being affected with various diseases particularly heart diseases, type 2 diabetes, certain types of cancer and osteoarthritis [22]. Recent reports pointed out at obesity as an important risk factor for chronic kidney diseases [23]. Potentially linking these two epidemiological observations it becomes evident that many obesity-induced derangements themselves were nephrotoxic. With increase in the proportion of such individuals with both the disease conditions co-existing, obesity and nephrotoxicity need to be addressed not as independent diseases but as a unique disease combination that required urgent attention.

Such a unique experimental model would closely reflect the natural history and characteristics of obesity along with nephrotoxicity. Further it was kept in mind while developing the model it should be less expensive, easily available, quick to develop, reproducible and display various components of obesity and nephrotoxicity. In the absence of such a unique experimental model where both the diseases co-exist, development of an animal model is of paramount importance and utility.

Obesity included increased TC, TG, LDL, VLDL and decreased HDL levels. Obesity might also lead to increase in BG, increase in SGOT, SGPT and ALP levels [14,24]. Patients of obesity might not have overt nephrotoxicity. However, the objective of present study was to develop an animal model, which has essentially nephrotoxic and in addition it should possess obesity.

Anthropometric parameters like body weight and Leeindex were evaluated in experimental groups. Group II and group IV animals showed significant increase in body weight and Lee-index when compared to normal animals. These results agreed with earlier reports, which demonstrated that HFD feeding increased energy intake that led to increased fat deposition in tissues and organs there by leading to weight gain [25]. Compared to group II animals, increase in body weight and Lee-index in group IV animals did not sustain from day 35 to 40 when compared to obese animals (group-II). Further, in the group III animals injection of cisplatin decreased both body weight and Leeindex. This change in group-III and group-IV animals may be attributed to the state of nephrotoxicity that is known to cause weight loss as reported by earlier investigators [25]. Challenging with cisplatin caused decrease in body weight which is typically seen in nephrotoxicity but not obesity. Hyperlipidaemia was the main characteristic of obesity. The TC, TG, LDL and VLDL levels were significantly higher and HDL levels were significantly lower in animals of group II and group IV when compared to normal control. These results concurred with those reported by Duiyan et al. and Sung et al. [26,27]. However these investigators did not include cisplatin-induced nephrotoxicity in their study.

As reported in previous studies, in the present study also AI and CRI also increased substantially on administration of HFD, which suggested that group II and group IV rats were more prone to coronary artery diseases [24]. In the group II and group IV rats BG levels and liver function markers such as SGOT, SGPT and ALP were significantly increased when compared to normal rats. These results were in accordance with earlier reports which demonstrated that HFD consumption led to increase in BG, SGOT, SGPT and ALP levels [13,27]. By observing all the above parameters it can be concluded that administration of cisplatin in obese rats did not cause any changes in obesity markers.

In nephrotoxic animals of group-III, SC, BUN, UTP increased and Clcr decreased in cisplatin-treated rats. These results were in good agreement with earlier reports [28,25]. In the current study rats fed with HFD and administered cisplatin showed significant raise in SC, BUN and UTP and decline in Clcr even when compared to nephrotoxic rats of group III. This indicated development of remarkable nephrotoxicity in obese rats and thus the present model appeared to demonstrate unique pathogenesis, which was not showed by the models used by other investigators.

Organ and fat pad weights were significantly increased in group II and IV rats when compared to control rats. These results agreed with previous reports, which stated that increased organ weight might be due to increased energy intake leading to raised fat depositions in tissues and organs [24,29]. In addition, significant increase in kidney weight in group IV was also consistent with earlier findings that nephrotoxic effect of cisplatin produced marked increase in the kidney weight, which might be due to renal inflammation [30].

Generally obesity and nephrotoxicity were associated with oxidative stress, which resulted from an imbalance between the production of free radicals and an effective antioxidant activity leading to oxidative damage to cells or tissue [13,27]. Darouich et al. stated that oxidative stress identified in obesity-related renal diseases might be the mechanism underlying the initiation or progression of renal injury in obesity [31]. In the present study, GSH, SOD and CAT levels were remarkably decreased and LPO levels were increased profoundly in group IV. These results agreed with earlier reports, which suggested that feeding HFD to experimental animals depressed their antioxidant system due to increased LPO and formation of free radicals [32]. These results were also in good agreement with previous reports, which demonstrated that administration of cisplatin caused renal oxidative stress [33]. Histological studies of liver and kidney also substantiated the biochemical findings.

Based on all the above observations of the current study, HFD fed rats developed nephrotoxicity with the administration of cisplatin without affecting the obesity markers. Hence this approach could serve to induce nephrotoxicity in obese rats. The present study demonstrated the development of a unique rodent model of obesity co-existing with nephrotoxicity. The developed model could aid in screening different pharmacological agents in pathological conditions where obesity and nephrotoxicity co-existed.