Epilepsy, a chronic encephalopathy caused by a variety of causes, causes excessive and repeated super synchronization discharge of brain neurons, which leads to transient brain dysfunction. Epidemiological investigation shows that the prevalence rate is 5 %, and there are about 6-7 million patients in China[1]. Temporal lobe epilepsy (TLE) is one of the common intractable epilepsy, accounting for more than 50 % of the intractable epilepsy. Therefore, it is of great significance to study new and effective ways and methods for the treatment of intractable epilepsy.

Clinical studies have found that carbamazepine has definite curative effect on epilepsy, and has multi-target and multi-channel comprehensive regulatory effect[2,3]. As a commonly used drug in the clinical treatment of temporal lobe epilepsy, carbamazepine has a good clinical effect in the treatment of temporal lobe epilepsy[4]. Voltage gated sodium channels mainly play the role of maintaining cell resting membrane potential and regulating cell excitability, which may play an important role in the pathogenesis of epilepsy[5-7]. There are many members of voltage-gated natriuretic channel subfamily. At present, in the brain tissues of patients with intractable glume epilepsy, it is found that the decreased expression level of SCN1A gene expression product Nav1.1 channel and the decreased inward rectifying sodium current are closely related to the occurrence of epilepsy[8-10]. In this study, the expression of SCN1A in hippocampus of pilocarpine induced temporal lobe epilepsy rat model was detected to explore the therapeutic effect and mechanism of carbamazepine on temporal lobe epilepsy, and to provide more scientific and accurate theoretical basis for clinical treatment.

A total of 90 healthy male Wistar rats, aged from 6 to 8 w, weighing 230±10 g, were randomly divided into carbamazepine group, model group and blank control group, with 30 rats in each group.

Seizures of Racine-IV or above were considered as successful models. If grade III or below reaction occurred 30 min after the second administration, 1/3 of the total dose was given to continue to induce epileptic seizures until epilepsy was induced (race- IV or above). After about one h of status epilepticus, diazepam injection 10mg/kg was given immediately to terminate the seizure. When diazepam was injected intraperitoneally, 300 mg/kg levetiracetam diluted with normal saline was injected intraperitoneally. If the control was not ideal, 10 mg/kg diazepam injection could be injected 20 min later.

Carbamazepine group: the concentration of carbamazepine solution was 16 mg/ml, the dose was 2 ml, once a day. Model group: after the establishment of the model, no drug treatment was given, and distilled water 2 ml/time/d was given. Control group: conventional feeding, no special treatment. After 8 w (60 d) of chronic phase, the rats in each group were treated by gavage for 2 w (14 d).

After the successful establishment of temporal lobe epilepsy model, the brain tissues were collected and sectioned at 0 h, 6 h, 72 h and 2 w after the termination of epilepsy. The specific production process is as follows: after anesthesia, SD rats were decapitated quickly and the brain was separated on ice. Half of the hippocampal tissue was about 10mg, each of which was added to the EP tube and stored at -80°. The other half was perfused with heparin and normal saline, then perfused with 4 % paraformaldehyde, 40 drops per min, fixed for 30 min until the liver became hard. The whole brain tissue was cut and stored in 4° - 4 % paraformaldehyde for 7 d. The fixed brain was sliced by vt1200s, a Leica automatic vibration slicer, with a thickness of 30 μm, and stored in 4° - glycol antifreeze anti-freeze.

The paraffin sections were soaked in Phosphate Buffered Saline (PBS) solution for 3 times. The slices were sealed with sheep serum for 60 min at room temperature. Then, Rabbit anti rat SCN1A polyclonal antibody (1:50 dilution) was added and put into 4° refrigerator overnight. Then PBS solution was soaked for 3 times. Goat anti mouse antibody labeled with horseradish peroxidase (HRP) was added and incubated at 37° for 30 min. PBS solution, 3 times. 1 mol/l Tris HCl buffer for 5 min. 0.05 % 3,3’-diaminobenzidinetetrahydrochlorid + 0.05 mol/l Tris HCl buffer was added to the slices, and 1-2 drops of 3 % hydrogen peroxide was added to develop the color. The reaction took 5-15 min, and the color reaction was observed and monitored under the microscope. 0.05 mol/l Tris HCl buffer was used to terminate the reaction and wash out the non-specific staining. Wash with distilled water. Re dyeing with hematoxylin for 2~3 min, washing for 10 min. Dehydrated with alcohol, transparent with xylene, sealed with neutral gum, observed under microscope.

A total of 3 mg fresh brain tissue was added into 100 UL Ripa lysate, and the supernatant was removed after centrifugation. Bicinchoninic acid concentration was used to quantitatively detect protein concentration, and then 30 μg protein/well was loaded. After SDS-PAGE electrophoresis, it was transferred to Polyvinylidene fluoride membrane, sealed with 5 % Bovine serum albumin at room temperature for 2 h, incubated with SCN1A working solution at 4° overnight, washed with tris-buffered saline and Tween 20 (TBST) at room temperature for 3 times, and incubated with HRP labeled working solution for 2 h. After 3 times of cleaning, the fresh Enhanced chemiluminescence (ECL) solution was added. The high performance luminescent gel imaging system was exposed. The gray scale of the band was calculated by image J software, and the relative expression intensity of phosphorylated protein was compared with the ratio of phosphorylated protein to total protein.

During the experiment, a total of 90 rats were intraperitoneally injected with lithium chloride pilocarpine hydrochloride chemical kindling method to prepare chronic epilepsy model. No rats died in the acute phase (24 h). During the incubation period (2 w), 11 rats died of chronic failure due to frequent convulsions, infection, ascites and inability to eat autonomously. Most of them died within 1 w after epilepsy, with a mortality rate of 18.33 %. 49 surviving epilepsy induced epileptic rats entered the chronic phase, and no death occurred in the chronic phase and administration phase. In the normal group, 30 rats were intraperitoneally injected with normal saline as the control, and all survived during the experiment. A total of 79 rats survived and reached the end of the experiment, including 24 rats in the carbamazepine group, 25 rats in the model group and 30 rats in the blank control group. Compared with the model group, the total attack times and attack time of carbamazepine group were significantly reduced (p<0.05), as shown in Table 1. 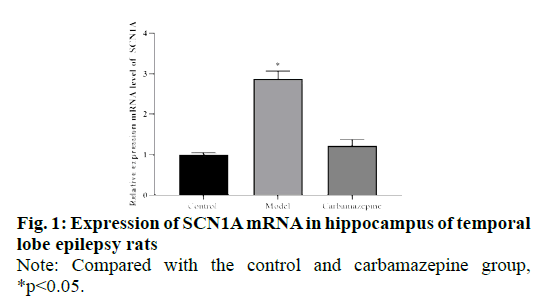 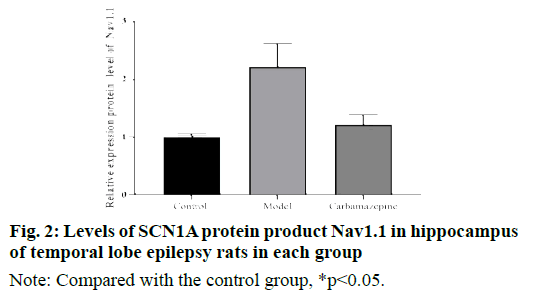 The results of immunohistochemistry showed that SCN1A was highly expressed in the cortex of temporal lobe and CA1, CA3 of hippocampus in normal rats. Compared with the control group, the expression of SCN1A immunoreactive cells in hippocampal CA1 area, CA3 area and temporal cortex of the model group were significantly increased (P < 0.01); there was no significant difference between the carbamazepine group and the control group (P > 0.05), as shown in fig. 3.

Figure 3: Expression of SCN1A in hippocampus and temporal lobe of rats
Note: Compared with the control group, **p<0.01.

Ion channels are a large class of membrane binding proteins, which are essential for maintaining the normal function of nucleated cells, because they determine the excitability of the membrane. Recent studies have found that the dysfunction of ion channels in the nervous system will have a serious impact on the body[11,12]. Recent studies have found that ion channel abnormalities related to epilepsy are mainly concentrated in potassium, sodium and calcium ions, and epilepsy genes affecting ion channels almost all cause seizures through the abnormal transmembrane movement of these ions[13]. Numerous studies have proved that the occurrence of epilepsy is related to the abnormal function of sodium channel, and the pathogenesis of epilepsy is related to the congenital mutation of sodium channel gene and acquired sodium channel disease[14-16]. Several types of idiopathic epilepsy have been confirmed to be caused by mutations in the VGSCs gene. Mutated sodium channel gene can change the function of sodium channel, such as promoting sodium channel activation, accelerating its reactivation, slowing its inactivation, etc. Acquired sodium channel abnormalities mainly cause epilepsy by changing the expression and function of sodium channels, such as increasing the sustained sodium current (INAP), which increases the excitability of neurons[15,17]. Animal model studies in mice have found that SCN1A gene mutation can produce ataxia, dystonia, tremor, progressive paralysis and other movement disorders[18-20], but there is no epileptic seizure. The decrease of the number of Nav1.1 in heterozygous individuals can reduce the excitability of neurons[21]. Using PCR technique, we found that compared with the control group, the expression level of SCN1A in the hippocampus of temporal lobe epilepsy rats was abnormally increased, and the protein product Nav1.1 level of SCN1A was also significantly increased, and the positive rate of SCN1A in the hippocampus neurons was significantly increased. These results indicate that the abnormal expression of SCN1A gene is related to the pathogenesis of temporal lobe epilepsy in rats. It is found that the enhanced dependence of sodium channel Nav1.1 and the generation of characteristic “reactivated” sodium current are also suitable for maintaining the stable conduction of high-frequency action potential, which is conducive to the propagation of epileptiform discharge during seizures. Therefore, we suggest that the increase in the number of the acquired sodium channels may increase the excitability of neurons and thus participate in the generation and transmission of epileptiform discharges.

It has become a consensus that antiepileptic drugs play a role by acting on ion channels. At present, a variety of antiepileptic drugs with this effect have been used in clinical practice. For example, tinidapt mainly acts on potassium channels[22], valproic acid and lamotrezol have calcium channel inhibition[23]. However, sodium channel opener is still in the primary stage of experimental research. As the first discovered sodium channel opener, phenytoin can inhibit epileptic discharges and reduce seizures caused by neurotoxins. However, sodium channels also exist widely in the heart and blood vessels. Studies have shown that phenytoin has significant peripheral side effects, and its clinical application is limited. Carbamazepine is a traditional antiepileptic drug, which can act on nerve cell membrane, reduce the permeability of nerve cell membrane to Na+ and Ca2+, inhibit nerve cells, reduce their excitability, and control seizures. It has been found that carbamazepine is a specific opener of Nav1.1 channel. Meanwhile, it is also the first discovery of exogenous opener for Nav1.1 channel[24,25]. It can significantly increase Nav1.1 channel current, hyperpolarize cell membrane and increase the stability of cell membrane. Therefore, it is speculated that carbamazepine may have therapeutic effect on the pathophysiological process involving Nav1.1 channel. Up to now, the relationship between carbamazepine and Nav1.1 channel and epilepsy has not been reported. In this study, we established a rat model of temporal lobe epilepsy, and detected the expression of SCN1A mRNA, protein level and immune positive rate by PCR, WB and immunohistochemistry. The results showed that after the administration of carbamazepine, the expression of SCN1A mRNA, protein level and immune positive rate in the carbamazepine group were significantly lower than those in the model group, and the difference was statistically significant, which indicated that carbamazepine could effectively inhibit the expression of SCN1A. In addition, compared with the control group, although the expression level was higher than that of the control group, the difference was not statistically significant, indicating that carbamazepine has a good effect on epilepsy caused by SCN1A.

In conclusion, carbamazepine can significantly control the abnormal increase of SCN1A in temporal lobe epilepsy rats, and make its expression level return to normal level. This may be due to the reduction of Nav1.1 channel protein expression, which can restore the damaged inward rectification to a certain extent, so as to buffer the extracellular sodium load, maintain the resting membrane potential, reduce the excitability of neurons, and ultimately reduce the production of epileptic discharges.

This work was supported by The First Affiliated Hospital of Jinan University.