The aim of this study was to reveal the relationship between four kinds of quinones and the ATP level in human bladder cancer T24 cells. Quinones could cause damage to T24 cells, and after 12 h exposure, IC50 values were in μM, 74 for 2-chlorobenzoquinone, 82 for 2,5-dichloro-1,4-benzoquinone, 122 for 2,6-dichloro-1,4-benzoquinone and 45 for 2,3,6-trichloro-1,4-benzoquinone. Further, the mechanism of increased ATP level when exposed to the 4 quinones was studied. It could be due to increased reactive oxygen species level in T24 cells when exposed to the these quinones, which suppressed the ATPase activity, leading to increased levels of ATP, which was dose-dependent. The higher the quinone concentration was, the higher the reactive oxygen species level and the ATPase activity was lower, leading to accumulation of more ATP in T24 cells. This study indicated that these 4 quinones could block energy metabolism in T24 cells which could lead to cell death.

Quinones are widely found in natural products, antitumor drugs, biochemical metabolites and environmental pollutants. Recently, these have been found in drinking water and other foods[1-5]. It has been reported that some quinones can produce large amounts of unknown disinfection by products, which were poorly evaluated for toxicity[6-8]. There have been reports that certain kinds of quinones can cause damage to cells, such as the ectogenic quinones derived from the metabolism of the body, which could induce a series of toxic effects, including acute cytotoxicity[9-12], immunotoxicity and carcinogenicity[13-16]. It is reported that quinones are highly reactive oxidation products, which can produce reactive oxygen species (ROS), and in turn, cause damage to cells and bodies. As generally known, ATP is the main sources of energy supplement in cells[17-20], which is an important substance to support life and either absence of or excess ATP level in cells cause damage. There have been reports that ATP level can be affected by many processes. In the present investigation it was observed that the 4 quinones tested enhanced ATP levels in T24 cells. The reason could be that these quinones can decrease ATPase activity in T24 cells dose-dependently. This observation indicated that these 4 quinones could block energy production, which could provide a way to kill T24 cells.

Cell viability was calculated using MTS assay. Cell viability data was based on the manufacturer’s instructions with little modification. T24 cells were cultured at 96-well plates (15 000 cells/well). After incubated for 24 h, the culture media in samples, blank and negative controls was replaced by the media, which various concentrations of HBQs (0, 10, 20, 50, 100, 150, 200, 300 μM) was contained. Each concentration was sextupled. After exposed for 12 h, each well was pipet 20 μl CellTiter 96® aqueous one solution, and incubated for 1 h in an incubator which contained 5 % CO2. The result was recorded by a microplate spectrometer at 490 nm. Based on the cell viability curves, IC50 values of the 4 hydroxybenzoquinones (HBQs) were determined. IC50 value was the concentration of HBQs required to reduce T24 cells to 50 %.

ROS level was quantified by ROS assay kit with some modifications. Ten-cm plates were used, the density was 107 cells/well and cultured for 24 h before the following tests. Briefly, 7ʹ-dichlorofluorescin diacetate (DCFH-DA) was diluted 1000 folds in the culture medium, which is free of serum medium, and the final concentration was 10 μM, the culture medium was removed and added 2.5 ml the above diluted DCFHDA to each plates, incubated at 37° for 25 min, washed 3 times with serum-free culture medium and finally suspended in 1 ml PBS. ROS was determined in a flowcytometer.

8-OHdG level in T24 cells was determined by DNA damage competitive ELISA kit with some modifications. Twenty five microlitres of 8-OHdG standard was added to a tube which contained 475 μl assay buffer. Then, added appropriate assay buffer to 8 tubes. The concentrations were 4000, 2000, 1000, 500, 250, 125, 62.6 and 0 pg/ml standard solution of 8-OHdG. Added 50 μl of standards or samples to appropriate wells. Then, assay buffer (75 μl) was added to each well, next, 25 μl of 8-OHdG conjugate and 25 μl 8-OHdG antibody, the plates were mixed well and incubated for 2 h at room temperature. Then, 100 μl TMB substrate was added and incubated for another 30 min, and last, added 50 μl stop solution, mixed well and read the absorbance at 450 nm.

All reagents were mixed thoroughly before using. Each MDA sample was assayed two times. Added 50 μl of samples or MDA-BSA standards to the MDA conjugate coated plate, then added 50 μl of the diluted antiMDA antibody. Finally, incubated in ambient temperature for 1 h. Washed each well by 250 μl of wash buffer for 3 times. Incubated for another 1 h after100 μl diluted antibody-HRP conjugate was added. Washed the wells for 3 times by the wash buffer, and next add 100 μl of substrate solution, then, added 100 μl of stop solution. Finally, the absorbance of each well was read at 450 nm by a microplate reader.

MMP was quantified by the MMP assay kit with some modifications. The cells were cultured in 4-well plates, the culture medium was removed after being exposed to quinones for 12 h, and washed with the PBS buffer. Then, 200 μl staining solution was added to each well and cultured in a cell incubator for 20 min. Next, washed the cells by 200 μl fresh and pre-warmed JC-1 buffer for 2 times, finally, 200 μl culture medium was added to the wells. Spectral characteristics were determined by Leica TCS SP5 system. The excitation wavelength was 490 nm, and the emission wavelength was 530 nm.

Cells were extracted with 4 volumes of assay buffer, centrifuged at 12 000 rpm for 5 min to get clear extract. Added 10 μl samples directly into a 96-well plate, made up to 50 μl per well with PK assay buffer, diluted the pyruvate standard to generate 0, 2, 4, 6, 8 and 10 nmol per well, 50 μl reaction mix was added to each well and measured the OD570 nm at T1 to get A1, A2 was read after incubating for 15 min (T2). Plot the pyruvate standard curve, B nmol of pyruvate generated between T1 and T2 by the standard curve. PK activity = (B×sample dilution factor)/((T2–T1)×V) = nmol/min/ml.

ATP was the main energy source in cells, it maintained the cells function well, and involved in almost all the cellular processes. So, ATP level could serve as an indicator of cytotoxicity of various biological compounds on cells. In this study, ATP level was quantified by the developed method previously and the results in figure 1 showed that the 4 quinones had dosedependent positive effects on ATP level in T24 cells. The hypothesis proposed was that ATP decomposed or generated pathway might be influenced by the 4 quinones. The detailed explanation was as follows. 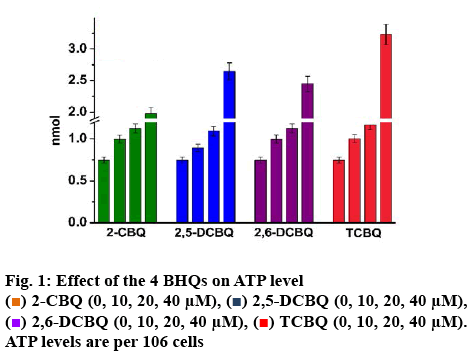 Figure 1: Effect of the 4 BHQs on ATP level

MTS was used to determine the T24 cell viability. Data in figure 2 showed cell viability after incubated with varying concentrations of 2-CBQ, 2,5-DCBQ, TCBQ and 2,6-DCBQ. A significantly reduced viability could be observed when treated with the 4 HBQs. The overall ROS level in T24 cells was determined when induced by the four HBQs. After exposed to various concentrations of the 4 HBQs (0-40 μM) for 12 h, the ROS level was measured using a ROS kit. The statistics in figure 3A indicated that the 4 quinones exerted dose-dependent positive effect on the intracellular ROS production. As known, ROS impacts many signal transduction pathways including respiratory chain, which was the main pathway that consume the intracellular ATP. The increased ROS level might be related to the increased ATP level. 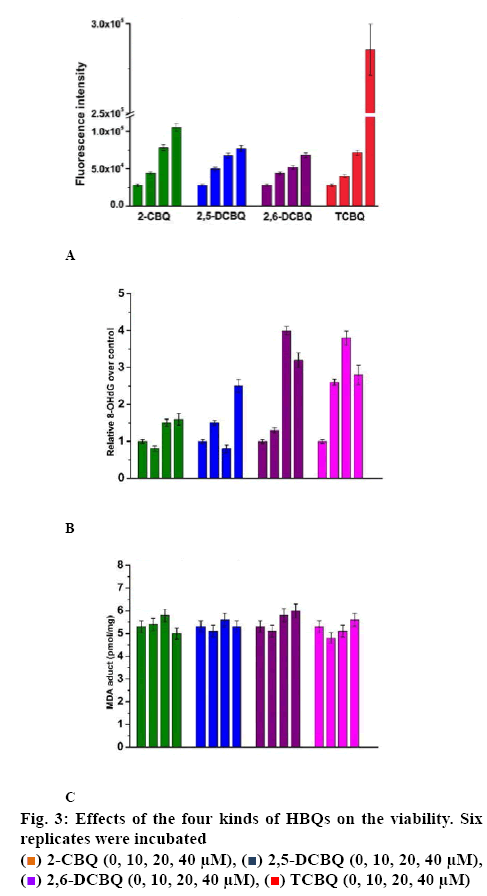 Figure 3: Effects of the four kinds of HBQs on the viability. Six replicates were incubated

8-OHdG was an important indicator of oxidative damage, which led to DNA damage. figure 3B showed that 8-OHdG level increased in T24 cells treated with different quinones. It was not dose-dependent. Therefore, the results indicated that the generated 8-OHdG was compound-dependent.

Lipid peroxidation could indicate oxidative stress in cells. The increase of MDA level might lead to cytotoxicity or cell death. The results in figure 3C indicated that MDA protein adducts in cells changed little when treated with quinones. These results in this study suggested that lipids were not the target of HBQ.

In mammalian cells, mitochondria are the major sources of intracellular ATP. This study explored whether the observed increased intracellular ATP level correlated to the MMP. It was estimated that the MMP of quinoneexposed T24 cells by staining cells with JC-1. T24 cells were exposed to 10, 20 and 40 μM quinones for 12 h and incubated with JC-1 for 20 min. The MMP was estimated by confocal microscopy, as the fluorescence intensity of JC-1 correlates with the intracellular MMP level. As shown in figure 4, cells showed no significant change between the exposed and the control groups in fluorescence intensity, which suggested that the four HBQs had no effect on intracellular MMP, and caused no damage to the mitochondrial. 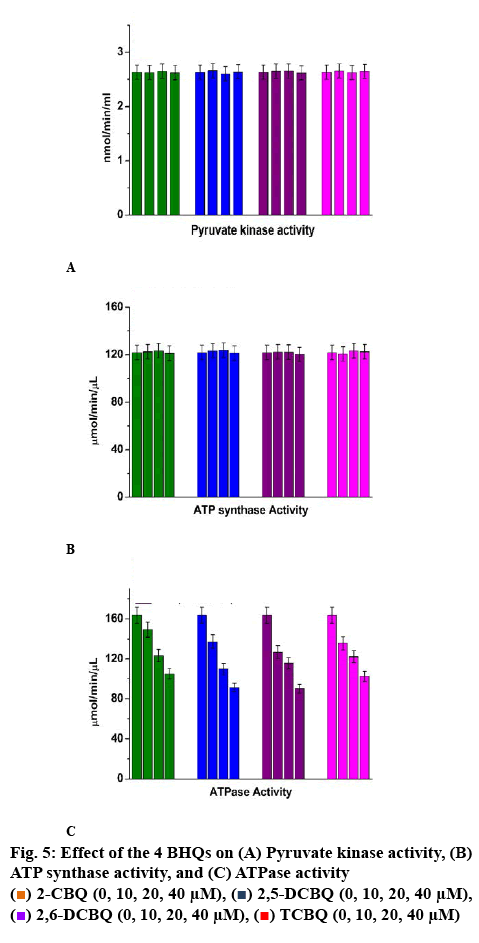 The above results indicated that the ROS level caused by the four quinones might be the main reason responsible for the increased ATP level when exposed to quinones. The mechanism scheme was presented in the graphic abstract.

It was reported that the effects of four quinones on ATP level in T24 cells and the key effector of it. Dosedependent increase in ATP levels could be observed in the T24 cells exposed to quinones for 12 h. The reason for this phenomenon was investigated (figure 6). It was observed that increased ATP level might be caused by the following reasons, the ROS level in T24 cells increased after exposure to the HBQs, the high level of ROS might have reduced ATPase activity, and as a result, the ATP levels were elevated. The higher the HBQ concentration was, the higher the ROS levels, resulting in lowered ATPase activity and reduced decomposition and accumulation of ATP in T24 cells. This study indicated that the energy generating pathway might be blocked by the 4 quinones, resulting in cell death. 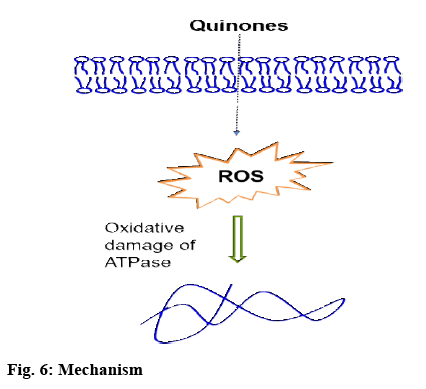