Effect of Dexmedetomidine on Children Undergoing Craniocerebral Surgery: a Meta-analysis

The choice of premedication is vital in pediatric anesthesia. The aim of this study was to assess the effect of dexmedetomidine on the perioperative period of craniocerebral operation in children. Studies were identified by searching mainstream databases from August 2013 to August 2016 .The assessed outcomes included heart rate, mean arterial pressure, NSE, S100β protein, AV-DO2 and CO2ER. The Cochrane risk biased evaluation tool was used to evaluate the quality of the included literature, and the relevant valid data were extracted. Meta analysis was performed using RevMan 5.3 software. Nine randomized controlled trials and observational studies involving 372 patients were included. The results indicated that children with craniocerebral surgery perioperative who were applicated with dexmedetomidine, the heart rate decreased significantly than the control group (weighted mean difference= -22.72, 95 % CI confidence intervals (-39.2, -6.19), p=0.007), NSE were also decreased (weighted mean differences= -5.14, 95 % confidence intervals (-8.24 -2.03), p=0.001). Moreover, there were significant differences in terms of S100β and mean arterial pressure as well. Current evidence indicates that dexmedetomidine can increase cerebral hemodynamic stability, reduce the cerebral oxygen metabolism rate, decrease NSE and S100 protein in children undergoing craniocerebral surgery. Dexmedetomidine played a significant role in brain protection, which was ideal choice of adjuvant treatment in the perioperative period of craniocerebral operation in children.

When craniocerebral trauma, aneurysm and brain tumour occurred in children, it is necessary to perform craniotomy under the state of general anaesthesia. However, the stimulation of craniocerebral operation itself can lead to surrounding normal brain tissue mechanical or ischemic injury caused by different influences on the prognosis[1]. Mortality rates of children with craniocerebral trauma are very high. During the perioperative period of craniocerebral operation, the stability of hemodynamics and brain oxygen metabolism are essential for improving the long-term quality of life in children[2]. As the paediatric patients are a special group, development of the brain tissue and systemic organs were not mature so that they are especially susceptible to the influence of narcotic drugs, which is more likely to aggravate nerve damage[3]. So, in recent years, doctors are focused on how to effectively protect brain tissue during craniocerebral surgery. The appropriate use of the perioperative period anaesthetic drugs could effectively protect brain tissue and improved of prognosis.

Dexmedetomidine (DEX), a highly selective α-2 adrenergic receptor agonist, plays a major role in the central nervous system locus coeruleus. It exerts sedative and analgesic effect without affecting intracranial pressure and respiration[4]. DEX protects the stability of brain hemodynamic by reducing brain extracellular catecholamine level and regulating cell apoptosis. Several studies have reported that DEX reduced hypertension and tachycardia in patients undergoing neurosurgery. There are less research currently in clinical about the effects of DEX on paediatric neurosurgical patients. Further studies are required to determine the safety and efficacy of using DEX in children with craniocerebral surgery. The purpose of this study was to evaluate the effects of DEX on paediatric hemodynamics in patients with craniocerebral surgery by meta-analysis. The study protocol followed the proposals of the PRISMA statement and Cochrane Collaboration for systematic reviews and meta-analysis.

When there are two or more outcomes, statistical analysis uses Review Manager (version 5.3, The Nordic Cochrane Centre, the Cochrane Collaboration, Copenhagen, Denmark). The continuous variables (HR, MAP) were analysed using weighted mean differences (WMD) or standardized mean differences. When the p value <0.05, the difference was statistically significant. We compared relative ratios for WMD for continuous data with corresponding 95 % confidence intervals (95 % CI) for each trial. I2 test was used to evaluate the heterogeneity of the study. For low heterogeneity result data (I2<30 %), a fixed effect model was used for analysis. For heterogeneous outcome data (I2>30 %), sensitivity analysis results using random effects models were used.

There are 184 articles obtained through the use of theme words and free word retrieval methods, 126 titles or abstracts not relevant to the study question for inclusion and remained 58. Reading the full article included 8 randomized controlled trials, the meta analysis involving a total of 372 cases of juvenile patients, the specific process is shown in fig. 1. 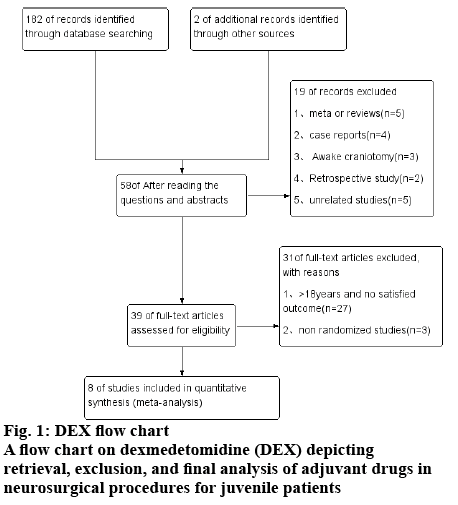 Methodological quality assessment of the 8 RCT articles included were shown in Table 1. All trials were randomized and double-blinded. There were 4 studies with randomized methods and 2 studies detailed the double-blinded approach. None of the studies clearly reported how the allocation was hidden. In 3 studies (n=112) the investigators compared the extubation HR in the DEX group and placebo group. There was strong evidence that HR was lower in the DEX group (WMD=-22.72, 95 % CI [-39.2, -6.19], p=0.007). Heterogeneity among the studies (p= 0.0002, I2=88 %) was heterogeneous among the studies, and used the random effects model.

Table 1: Risk of bias assessment for evaluation the quality of each included trials This systematic review and meta-analysis indicate that the use of DEX is associated with better outcomes in paediatric patients undergoing the perioperative period of craniocerebral operation. The study showed that the HR of was significantly reduced in the children with DEX. The average arterial pressure in the DEX group was reduced and the dosages of other anaesthetics, such as fentanyl and sevoflurane, were reduced as well during the operation, which is consistent with another recent meta-analysis[9]. In addition, the use of DEX didn’t increase the extubation time and perioperative bradycardia risk. Consequently, the patient's hemodynamic stability is maintained.

During craniocerebral operation, the skull-pin headholder was must used to stabilize the head. But that operation was an intense nociceptive stimulus, which could increase blood pressure and cerebral blood flow under general anaesthesia. These brain hemodynamic responses might cause brain oedema, intracranial hypertension, or intracranial haemorrhage in the process of operation. This stress response is characterized by an increase in the secretion of pituitary hormones and the activation of the sympathetic nervous system. It is mainly associated with the increasing of the release of catecholamine and cortisol.

Because of young age, light weight, general complications of malnutrition at different degrees, immaturity of organs and poor compensation abilities, the operative anaesthesia of infants is special. The brain development of children is immature and sensitive to the anaesthetic, which can easily destroy the stability of hemodynamics, appeared respiratory depression, delirium and other side effects. So, the rational use of anaesthetics is particularly significant.

DEX is essentially a selective α-2 adrenergic receptor agonist that binds the receptor with an affinity that is 7~8 times greater than clonidine, a similar drug. The binding of DEX to the receptors reduces the release of intracranial catecholamine, but also can inhibit the activity of the sympathetic nervous system. Then the release of catecholamine neurotransmitter and cortisol are reduced[10]. There also some studies that suggested that DEX can increase the level of calcium in brain blood vessels and reduce glutamate excitotoxicity and the apoptosis of nerve cells. Because of the above reasons, DEX can improve the blood flow, reduce release of inhibited neurons in brain ischemia area and maintain hemodynamic stability. Thus, DEX achieve the protective effect of brain tissue[11].

In the present analysis, the NSE and S100β proteins were significantly lower in the DEX group than in the placebo group at the end of surgery. S100β is a small calcium binding protein. Its biological distribution is extensive and the content of human brain tissue is the highest[12]. NSE is a key enzyme in the glycolytic isozymes of enolase, NSE has 5 isozymes, composed of alpha, beta, gamma subunits to form 2 dimers, including gamma subunits NSE, specifically in normal neurons and neuroendocrine cells[13]. Because the integrity of the blood-brain barrier causes the protein to rarely escape from the brain tissue into the circulatory blood, it is sometimes difficult to extract the protein from the serum[14]. When the ischemic cerebral haemorrhage, traumatic cerebral vascular diseases, such as case, nerve demyelination or neuronal disintegration and destruction of the blood-brain barrier, further leads to a large number of brain neurons of NSE and S100β protein released into the blood circulation[15]. NSE and S100β protein levels were significantly lower in children with brain surgery after DEX assisted anaesthesia than those in the placebo group, suggesting that DEX reduces the release of NSE and S100β proteins.

During the craniocerebral operation, the AV-DO2 and CO2ER in the DEX group were significantly lower than those in the placebo group. The relative cerebral blood flow than the cerebral oxygen metabolism of lower demand to ensure oxygen supply to the brain in the normal range. It suggested that DEX anaesthesia reduced the degree of cerebral anoxia and improved the oxygen metabolism in brain tissue, which achieved the cerebral protective effect[16].

First, several pooled analyses lacked grey literature may lead to publication bias. The quality of the literature included in the study is uneven and there may be bias in implementation and measurement. Second, this meta-analysis was influenced by significant heterogeneity that was introduced by multiple factors that included the difference of DEX dosing time, speed, age and gender. Third, all the intravenous drugs do not collect other medication articles, so different methods of anaesthesia on blood pressure fluctuations may also have certain effect. Future research is needed from the following aspects further improvement: expanding the sample size; random distribution, correct concealment and blinding; extended follow-up.

In conclusion, DEX was found to control postoperative HR and maintain MAP, which was associated with maintaining hemodynamic stability. It also reduced NSE and S100β protein production, which was associated with reducing brain damage. Through reducing AV-DO2 and CO2ER DEX could reduce the cerebral oxygen metabolism. The application of DEX in the perioperative period of craniocerebral operation in children is helpful for the protection of brain tissue and improvement of cure rate.

This research was carried out without funding.

No conflict of interests among the authors.