Effect of Diphosphate on Proliferation of Osteoblasts in Mice

Diphosphate is a synthetic, metabolically stable inorganic pyrophosphate analogue. It is formed by replacing the P-O-P bond in pyrophosphate with the non-hydrolyzed P-C-P bond [1]. The molecular configurations of P-O-P and P-C-P determine that the three-dimensional structure of P-O-P and P-C-P can bind to Ca2+ and other divalent ions, which is the basis of the targeting properties of bone diphosphate. At present, diphosphate has been developed to the third generation, which is widely used in the treatment of bone resorption-increasing diseases (such as osteoporosis, oncogenic osteopathy, Paget disease, hypercalcemia, etc.), especially in the treatment of osteoporosis and bone tumors [2]. Diphosphates are generally divided into two categories: nitrogen-containing diphosphates and non-nitrogen-containing diphosphates. Nitrogencontaining diphosphates can inhibit the methylvalerate pathway of cholesterol synthesis by selectively inhibiting the binding of isoprene pyrophosphate to farnesyl chlorosynthase, resulting in a decrease in the number of farnesyl pyrophosphate vinegar. This reduction ultimately leads to the lack of isoprenylation of guanosine triphosphate (GTPase), which is essential for osteoclasts to function and survive, and cell death [3,4]. Non-nitrogenous diphosphates incorporate an inactive adenosine triphosphate (ATP) analogue into cells, which has no energy reserve to release and thus leads to cell death. The mechanism of action of diphosphate is only specific to osteoclasts, and more and more studies have shown that diphosphate also plays a role in osteoblasts [5]. For example, Giuliani et al. reported that diphosphate and itophosphoric acid enhanced the expression of Interleukin (IL)-6 in osteoblasts. Shanbhag et al. found that apart from inhibiting the osteolysis caused by wear debris, diphosphate also increased the mineralized bone mass in the implant hole by 115 % [6,7]. Plotkin et al. reported that diphosphate could inhibit the apoptosis of human osteoblasts, and mouse osteoblasts [8,9]. Pan et al. confirmed that Milephosphate decreased the expression of transmembrane Receptor activator of nuclear factor kappa-Β ligand (RANKL) in osteoblasts by increasing the activity of tumor necrosis factor-α (TNF-α) invertase. Based on these results, it is speculated that diphosphate has a direct synthesizing effect on osteoblasts [10]. Although there are many studies on the effects of diphosphate on the proliferation and differentiation of mouse osteoblasts, there are few studies on the optimal concentration of diphosphate. Therefore, in this study, mouse embryo osteoblasts precursor cells (MC3T3-E1) are taken as the research object and the precise quantitative study of DPI concentration on mouse osteocyte proliferation is further explored, so as to provide new ideas for future research.

Healthy, two-month-old rats are selected and killed. After being disinfected with 75 % medical alcohol, the knee joint of the hind limbs of the rats is severed on the super-clean table. Without opening the articular surface, the surrounding muscles are removed and they are put into the blank medium containing bi-antibodies. The articular cartilage surface is then separated. First, the synovial membrane on the cartilage surface is gently scraped, and the cartilage is cut off with a knife blade. The cartilage is placed in eppendorf (EP) tubes containing double-antibody blank medium and cut into 1 mm3-sized tissue pieces with ophthalmic scissors. In the centrifuge, 1000 r/min centrifugation is carried out and the supernatant and blank medium is discarded. 1.0 ml 0.25 % collagenase type II is added into EP tube and digested in a constant temperature water bath at 37° with oscillation. Digestion is observed at intervals of 2 h until cartilage fragments are gradually digested. Cells are collected by centrifugation at 1000 r/min. All collected cells are suspended in DMEM/F-12 complete culture medium (containing 15 % fetal bovine serum, 100 U/ml of penicillin and streptomycin respectively). The cells are inoculated in a 25cm2-culture flask with the density of 2×105 and cultured in 5 % CO2, 37° incubator. After 48 h, the adherence of cells is observed and the liquid is changed. After that, the liquid is changed every 2 d.

When chondrocyte confluence tablets are observed under inverted microscope (about 90 %), subculture is carried out. In the super clean table, the culture medium is poured out. Phosphate-buffered saline (PBS) is used to wash with three times, and 1 ml 0.25 % trypsin is added. Cells are observed under inverted microscope after 1 min in an incubator at 37°. Morphology begins to change, gradually becoming round, and individual cells begin to suspend. At this time, DMEM/F-12 complete medium is quickly added to terminate trypsinase digestion. The cells are then repeatedly blown to suspend and disperse, and placed in a centrifugal tube for 3000 r/min for 6 min. The liquid is poured out, a proper amount of complete medium is added, and cells are repeatedly blown and counted. MC3T3-E1 cells are inoculated into H-DMEM medium (containing 10 % fetal bovine serum, 10 mm β-glycerol phosphate, 50 mg/ml L-ascorbic acid) at 4×105 per cm2 density. It is incubated in 37°, 5 % CO2 and saturated humidity incubator. Dexamethasone is known to have osteogenic differentiation activity. Therefore, in this study, it is not used as a standard medium supplement, but as a positive control to compare the effects of alendronate.

Every 3-4 d, the cells grow into a single layer and are digested and passaged with 0.25 % trypsin. After passage, MC3T3-E1 cells are divided into five groups. The first group is blank control group without inducer, and is cultured conventionally. The second group is positive control group, and 10-8 M dexamethasone is added. The third, fourth and fifth groups are experimental group, and 10-6 M, 10-8 M and 10-10 M Allen phosphoric acid is added, respectively. After several days of culture, MTT, ALP activity and reverse transcription polymerase chain reaction (RT-PCR) are measured, as described below.

MTT method, also known as MTT colorimetry, is a method to detect cell survival and growth. The detection principle is that succinate dehydrogenase in mitochondria of living cells can reduce exogenous MTT to water-insoluble blue-purple crystalline Methamide (Formazan) and deposit in cells, while dead cells have no such function. Dimethyl sulfoxide (DMSO) can dissolve methylidene in cells. The light absorption value of DMSO at 490 nm wavelength can indirectly reflect the number of living cells. Within a certain cell number range, the amount of MTT crystallization is proportional to the number of cells.

MC3T3-E1 cells are digested into a single cell suspension and inoculated into 96-well culture plates with 2×103 per hole. The volume of each hole is 200 μl. After overnight incubation at 37°, 10-8 M dexamethasone, 10-6 M, 10-8 M and 10-10 M Allen phosphoric acid are added to the medium respectively. On the 2nd, 3rd and 4th d after continuous culture, 5 holes are taken from each group for detection. Methods: 20 μl MTT solution (5 mg/ml) is added to each pore, and it is incubated at 37° for 4 h. The supernatant is absorbed and discarded. 150 μl DMSO is added to each pore and it is oscillated for 10 min. The wavelength of 490 nm is selected. The light absorption value of each pore is measured by ELISA and the results are recorded.

MC3T3-E1 cells are inoculated into 6-well culture plates with 1.5×105 per well. After overnight incubation, 10-8 M dexamethasone, and 10-6 M, 10-8 M and 10-10 M Allen phosphoric acid are added to the medium respectively. On the 2nd, 3rd and 4th d after continuous culture, 5 holes are taken from each group for detection. Methods: 20 μl 0.2 % Triton X-100 is added to the culture medium, adherent cells are scraped off and cell suspension is collected in centrifugal tube. The suspension is agitated for 10 min at 40°, and the supernatant is collected after centrifugation for 10 min at 2500 Xg. It is planted in 96 well culture plate with 50 μl/hole. ALP kit is used for ELISA, optical density value is measured at 405 nm and ALP activity is calculated at different time.

Bone morphogenetic protein-2, OC and Co11.I are related genes of osteoblasts. They are important markers of differentiation and maturation of osteoblasts. They are also important substances involved in the formation, metabolism and regeneration of bone tissue. MC3T3-E1 cells are inoculated into 6-well culture plates with 1.5×105 per well. After overnight incubation, 10-8 M dexamethasone, 10-6 M, 10-8 M and 10-10 M Allen phosphoric acid are added to the medium respectively. The expression of BMP-2, OC and collagen I (Coll.I) is detected on the 4th d after continuous culture. Methods: The culture medium in the culture plate is carefully absorbed, the cells are lysed by Trizol, the lysate is extracted by trichloromethane, and the total RNA is precipitated by isopropanol, and dissolved in Diethyl Pyrocarbonate (DEPC) treated water. Random hexamer primers are added to reverse transcriptase for reverse transcription. The fragments of BMP-2, OC and Coll. I genes are amplified by polymerase chain reaction. Specific primers and reaction conditions are shown in Table 1. PCR products are analyzed by agarose gel electrophoresis and observed under ultraviolet light.

All data are analyzed by SPSS11.0 software. The experimental data are expressed by the mean standard deviation, and are processed by one-way ANOVA and double-tailed t-test, with p<0.05 as the test standard. 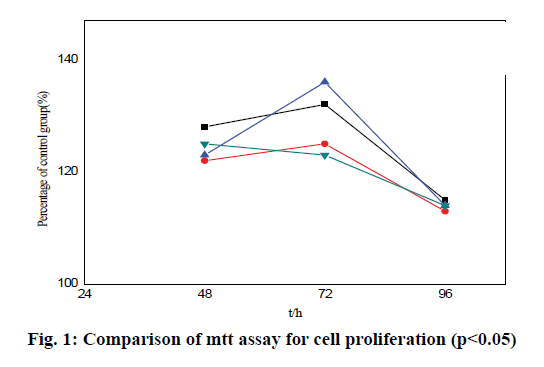 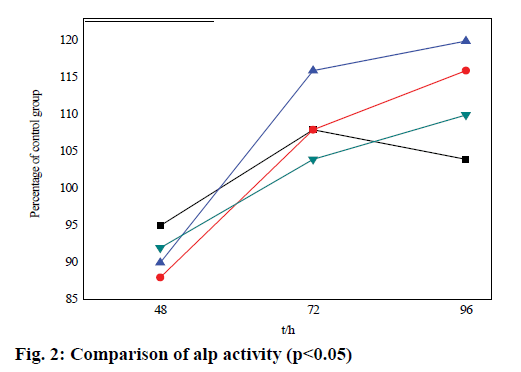 In this study, the expression of MC3T3-E1 cells is detected by real-time quantitative PCR (RT-PCR). MTT (3-(4, 5) - dimethylthiahiazo (-z-yl) -3, 5-diphenytetrazoliumromide) is used to detect the proliferation of MC3T3-E1 cells and the effect on ALP activity, so as to explore its correlation. The results show that MC3T3-E1 cells have the greatest valueadded effect, the most significant gene expression and the highest ALP activity at the concentration of 10-8 M. The results are as expected. More accurate and quantifiable data for MC3T3-E1 cell proliferation are obtained through experiments.

In conclusion, it is known that diphosphate can alter the balance by regulating the concentration, affect the activity of osteoblasts, promote osteoblasts synthesis and division, and affect ALP activity and gene expression. However, there are still some deficiencies in this study. MC3T3-E1 cells have some defects, such as chromosome translocation and loss. MC3T3-E1 cells are not exactly the same as normal osteoblasts. The study of MC3T3-E1 cells cannot fully reflect the mechanism of osteoblasts.