Hypertension is a common clinical disease. At present, 10 to 20 % population of the world are hypertensive, the incidence of which is rising, and it is also the main cause of other heart and brain diseases[1-2]. Hypertension is a disease caused by many factors, which can be divided into 2 types, primary and secondary. According to epidemiological survey, more than 90 % of the patients with hypertension are primary. People think that blood vessel is only a simple effector system, but with the deepening of research, it is found that blood vessel itself is a complete organ. While transporting blood, it promotes a variety of local factors to exert vascular tension and other functions[3]. Metformin is a common clinical drug of biguanide class. It can reduce blood sugar in diabetes mellitus and has a high utilization rate. However, the literature on the treatment of hypertension with metformin is relatively rare. Losartan is used to treat essential hypertension clinically. It belongs to Angiotensin II antagonist class of drugs and has the function of inhibiting vasoconstriction[4].

Vascular endothelial growth factor (VEGF) is a specific mitotic agent, which can be detected in normal human body and expressed in many organs, such as heart, kidney and brain. As it was known about the relationship of VEGF with various diseases, the relationship between VEGF and hypertension has been studied continuously[5]. Angiotensin II (Ang II) is an important component of angiotensin. It exists in both adrenal cells and cardiac myocytes. It can bind with angiotensin receptors and produce effects. It can induce vasoconstriction of peripheral blood vessels of patients with hypertension. However, there are few reports about the effects of metformin and losartan on serum levels of VEGF and Ang II in spontaneously hypertensive rats (SHR). In this study, the expression of serum levels of VEGF and Ang II were observed after using the above two drugs in SHR.

Thirty SHR male rats, aged 5-6 w and weighing about 100-150 g, were purchased from Beijing Vitonglihua Company. They were fed sterile diet at room temperature for 2 w in accordance with the Regulations on the Management of Laboratory Animals. Losartan (Beijing Novartis Pharmaceuticals), metformin tablets (Mosadong Company), ELISA Kit (Hualianke Biology), formaldehyde (Taizhou Huayu Company), goat antirabbit first antirabbit (Shanghai Hengyuan Biology). The SHR rats were divided into 3 groups with 10 rats in each group. SHR group was fed normal diet without drug treatment. Metformin group was fed normal diet. Metformin tablets were intragastrically administered with normal saline at a daily dose of 30 g/kg. The combined group was treated with losartan diluted with normal saline at a daily dose of 30 mg/kg after 12 w of treatment.

The blood pressure of tail artery in 3 groups of rats was measured before and after treatment. Before and after drug intervention, the orbital venous blood was collected and centrifuged for 2000 rpm. The levels of VEGF and Ang II in supernatant were detected by ELISA. Then, anesthetized rats were subjected to craniotomy to extract a small amount of brain tissue after euthanasia. Brain tissues of the 3 groups of rats were fixed with medical formaldehyde, then embedded in paraffin with a thickness of 4 microns, dehydrated with 85 % alcohol, and sealed with goat serum. Goat antirabbit antibody was added, 3,3′-diaminobenzidine was used for the first staining and hematoxylin was used for the second staining. The number of positive cells of VEGF in brain tissue of three groups of rats was observed.

Brain tissue was extracted, lysate was added in a sterile test tube, and mixed it with trypsin extract at 1:100, cooled it in refrigerator for 10 m to complete cell fission to obtain solution E. Myocardial tissue was taken in Eppendorf tube and 2 ml trypsin extract at 1:100 ratio was added to cause complete cell fission to obtain solution F. Solutions E and F were mixed at 80:1 ratio. The working solution was prepared and kept at 37.5° in an incubator for 20 m. Glyceraldehyd-3-phosphate dehydrogenase (GAPDH) antibody (1:1000) was added. Then antiGAPDH and antiGAPDH antibodies were hybridized and chemiluminescent reagents were added. The image is processed by Lab Works software. The results were sorted out by SPSS22.0 software. The correlation between blood pressure changes, the expression levels of VEGF and Ang II in serum and brain tissue before and after treatment was analyzed. The measurement data were calculated by (X+s). T was used between groups and p<0.05 was used to indicate the difference.

Table 1: Comparison of Blood Pressure Levels in Three Groups of Rats Before and After Treatment

Table 2: Comparison of Blood Pressure Levels in Three Groups of Rats Before and After Treatment 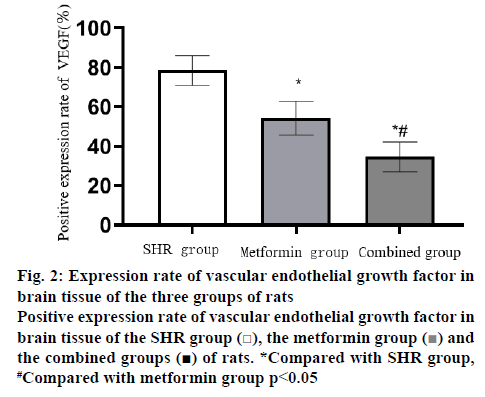 and the combined groups 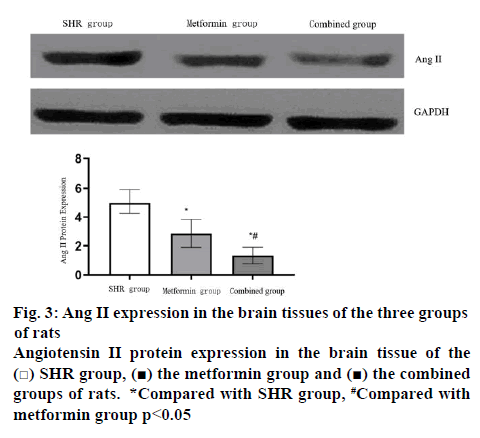 the metformin group and

The pathogenesis of spontaneously hypertensive rat model is similar to the pathogenesis of human hypertension. At present, it is an ideal experimental model for preclinical research of this kind of disease. The characteristics of this kind of disease is that the cause of the disease is not clear, but the genetic probability is high. At present, the global incidence of the disease is regional. The United States has the high incidence area of the disease. Studies have confirmed that the patients with essential hypertension are basically asymptomatic, but they need lifelong treatment. In order to realize that they suffer from the disease, some patients cannot effectively control it and involve other organs, at present, clinical treatment mainly relies on past treatment experience and choose a variety of antihypertensive drugs as per the Guidance for Disease Control[6-9].

In this study, it was found that the levels of VEGF in serum and brain tissue of SHR rats increased, while the levels of VEGF and blood pressure decreased in rats treated with metformin. Compared with metformin group, the expression of VEGF and blood pressure in the combined group was lower. Vascular endothelial cell differentiation and potential capillary regeneration can be accelerated when the expression level of vascular endothelial cell is within the normal range in healthy people. However, a large number of studies have shown that there is an important correlation between VEGF and elevated blood pressure. When elevated blood pressure lasts for a short time, the changes of VEGF in patient’s serum are small, and there is no pathological change. But when the continuous elevation of blood expression is not effectively controlled, the expression of VEGF is elevated. Now vasoconstriction, resulting in brain tissue lack of blood oxygen supply, leading to a variety of kidney and metabolic diseases[10-12]. Ma[13] study confirmed that patients with essential hypertension exhibited increased insulin resistance, leading to a variety of metabolic diseases, such as hypertension and diabetes mellitus, but metformin treatment of patients with this type of insulin resistance, while reducing blood pressure also reduced the damage to heart and brain tissue, improving hemodynamics[14]. Losartan is a drug that can alleviate the progress of blood vessels in patients with hypertension. Zhang and Liang[15] study found that oral absorption of losartan can reduce the level of VEGF in hypertensive patients, reduce the contraction of blood vessels and maintain the stability of organs and tissues. Li et al.[16] study found that metformin combined with losartan can reduce hypertension and the expression of VEGF.

In this study, it was found that the expression of Ang II in serum and tissues of SHR rats increased significantly, blood pressure increased, but was decreased in the metformin group, while Ang II and blood pressure in combination group were even lower. Ang II has a variety of biological reactions, which can increase the volume of extracellular fluid, increase vascular resistance and increase the body’s blood pressure. It is mainly divided into two subtypes, AT1 and AT2, which play different roles[17,18]. Ang II receptors are present in many organs of the body, such as brain and myocardium. It promotes smooth muscle tone by regulating AT1 to exert vasoconstriction and increase the release and absorption of adrenaline. Losartan in SHR antagonizes AT2 receptors blocks the combination of exogenous Ang II and plays a role in lowering blood pressure and alleviated cerebrovascular diseases[19]. Wang and Huang[20] study showed that metformin combined with losartan in the treatment of hypertension is more stable, Ang II levels decreased, and widely used in a variety of cardiovascular and cerebrovascular diseases to improve the condition. In summary, metformin in combination with losartan has a good effect in the treatment of spontaneous hypertension, and the levels of serum and brain tissue VEGF and Ang II are significantly decreased, which could improve the condition of patients.