Gastric cancer (GC) is the fourth most common cancer in the world, which is also the second leading cause of cancer death in China. Its main clinical symptoms are abdominal pain, intestinal bleeding or intestinal obstruction necrosis, which is one of the diseases with high mortality at present. So far, the main treatment of GC has been radical gastrectomy. Because a large number of GC patients often have anaemic symptoms and gastrectomy+lymph node dissection sometimes leads to a large amount of blood loss during operation, which is easy to cause adverse reactions during operation, such as low immune function, electrolyte disorder and blood coagulation dysfunction, which brings great risk to the treatment of patients[1,2].

Therefore, blood transfusion (BTF) is a life-saving treatment in the radical resection of GC. Although the demand for BTF is decreasing due to the improvements in surgical techniques and perioperative care[3], many studies have shown that perioperative blood transfusion (PBT) is related to the decrease of overall survival (OS) and disease-free survival (DFS) in patients undergoing radical resection of GC[4-6]. Some studies have shown that there is a causal relationship and has an effect on the immune system, thereby enhancing immunosuppression[1,7,8]. In addition, studies have shown that there is no difference in long-term prognosis between patients undergoing laparoscopic radical gastrectomy and open radical gastrectomy[2,3,9-11]. However, compared with laparotomy, laparoscopic gastrectomy has a lower immunosuppressive rate, blood loss and requirement for blood transfusion[11-14].

However, other studies have suggested that BTF is a complex factor rather than a prognostic indicator because it is significantly affected by other factors. Therefore, the relationship between BTF and the prognosis of GC is still controversial. It is believed that the decline in the long-term survival rate of GC patients receiving BTF is not only caused by BTF, but other reasons might also be involved. It can also be related to the degree of the tumor and other prognostic factors related to BTF, such as advanced age, difficulty and duration of the operation. This study aims to investigate the risk factors of PBT and its effect on long-term prognosis in patients treated with laparoscopic radical gastrectomy.

The TNM staging of GC was performed according to the 8th edition of GC TNM staging system issued by the Union for International Cancer Control (IUAC) and American Joint Committee on Cancer (AJCC) in October 2016[15-18]. Perioperative mortality included deaths within 30 d after gastrectomy. The postoperative morbidity was classified according to the Clavien-Dindo classification[21-24], the main complications were divided into 3, 4 and 5 grades and the minor complications included 1 and 2 grades.

After discharge, patients were followed up every 3 mo in the first 2 y, every 6 mo in the following 3 y and every 6 mo or annually thereafter. Physical examination and routine haematological examinations were carried out during each follow-up. Abdominal CT or abdominal ultrasound and chest X-ray were re-examined 6 mo after the operation. Disease recurrence is defined as local or distant metastasis of cancer cells confirmed by radiation or pathology and the time of diagnosis is determined by the interval between surgery and the last follow-up. The last scheduled follow-up was August 2019. This is a retrospective study, which was approved by the institutional review committee of Taikang Xianlin Drum Tower hospital and the patients signed an informed consent form.

The survival rate was estimated by the Kaplan-Meier method and the significant difference was determined by the logarithmic rank test. Univariate analysis was used to determine and select the factors that had significant effects on OS and DFS (p<0.10), which were included in the multivariate Cox proportional risk regression model. The adjusted risk ratio (h) and the corresponding 95 % confidence level were used to calculate the confidence interval (CIs). p<0.05 is considered to be statistically significant.

In this study, 103 patients treated with laparoscopic gastrectomy were included. Forty-five patients (43.7 %) received BTF on the day of gastrectomy or 30 d during hospitalization after the operation. Compared with patients without PBT, patients who received BTF usually have the characteristics of older age, low preoperative hemoglobin level, advanced cancer, multiple complications, high open radical gastrectomy rate and high incidence of complications within 30 d after the operation (Tables 1 and 2).

Table 1: Clinical and Pathological Features of the Two Groups

Table 2: Results of Surgery in the Two Groups

The median follow-up period was 38 mo and 5 patients (3 in the blood transfusion group and 2 in the non-transfusion group) lost at each time point. In patients receiving blood transfusions, both OS and DFS decreased significantly (figs. 1 and 2). The cancer stage and multiple complications were independent influencing factors of OS (Tables 3 and 4) and DFS (Tables 5 and 6). Patients who received PBT did not find an independent association with a reduced risk of OS or DFS. 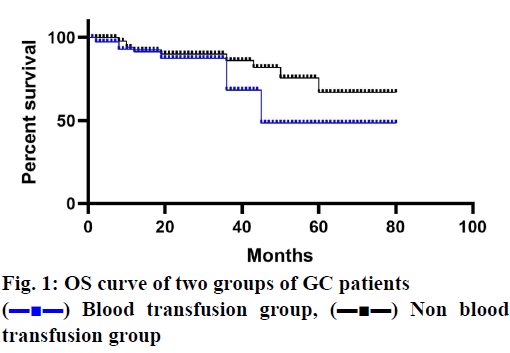 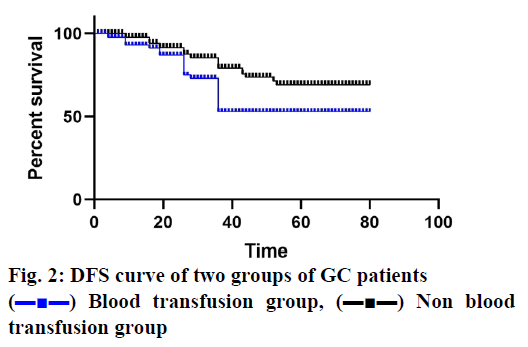 In this study, BTF was found to be related to low OS and DFS after laparoscopic radical gastrectomy. Patients who received BTF were of older age with low preoperative hemoglobin level, advanced cancer, multiple complications, high open radical gastrectomy rate and high incidence of complications. However, multivariate analysis did not find that BTF was an independent risk factor for re OS or DFS reduction. It has been previously reported that laparoscopic gastrectomy can reduce tissue injury and better protect immune function compared with open gastrectomy[7-10]. In theory, reducing tissue damage can reduce the effect of PBT on the immune system, thus reducing OS and DFS.

The amount of blood loss in laparoscopic surgery is usually lower than that in open gastrectomy. A decrease in the BTF rate is not the inevitable result of the reduction of blood loss. However, it is reported that laparoscopic gastrectomy can reduce the volume of PBT and the number of transfusion patients. In this study, the PBT rate was found to be relatively high, which might be related to the patient characteristics and the lack of PBT standard guidelines.

However, comparative studies have shown that patients treated with laparoscopy had less BTF[7-12]. PBT has been shown to increase the risk of postoperative complications rather than laparoscopic surgery. Results of this investigation showed that there is no causal relationship between PBT and poor prognosis after open gastrectomy. Previous reports showed that the poor prognosis of patients with GC after PBT is related to the conditions of BTF, but not to the transfusion itself[19-21].

Compared to open gastrectomy, laparoscopic gastrectomy has lower postoperative morbidity, mortality and a similar survival rate in the treatment of GC[7-9]. However, recent evidence suggested that the transformation of patients with GC has a negative effect on long-term exposure. Interestingly, more patients who received BTF eventually chose open gastrectomy in this study. Compared to transition patients who did not receive open surgery, patients treated with open surgery had poorer baseline characteristics.

Previous studies have explained that the lower survival rate of patients with GC after PBT could be due to the underlying cardiovascular or pulmonary disease, which led to a lower threshold for BTF. In addition, the increase of blood cell count during operation is related to the increase of postoperative mortality. These studies suggested that PBT could improve poor prognosis with or without causality.

It was observed that there was no causal relationship between BTF and prognosis in patients treated with laparoscopic gastrectomy in this study. Similar to the results reported of open surgery, here again it was found that poor health status of BTF patients could be associated with poor prognosis[4-6]. Some studies suggested that by reducing BTF and improving surgery, the prognosis can be improved. The advantages of laparoscopic gastrectomy might be related to the need for BTF, which is to protect immune function and reduce intraoperative blood loss. In summary, PBT is associated with decreased OS and DFS in patients treated with laparoscopic radical gastrectomy. This association reflects the clinical condition of patients who needed surgery, but not causality.

The authors appreciate the support of the Taikang Xianlin Drum Tower Hospital.