Lincomycin hydrochloride is a systemic antibiotic, which is active against most common gram positive bacteria. It has proved to be excellent for infectious diseases like acne, anthrax, pneumonia, and also for the treatment of furunculosis, carbuncles, impetigo, burns and wounds, carrying to gram positive bacteria. Gels were prepared using carbopol 940 as gelling agent, and isopropyl myristate and dimethyl sulfoxide as permeation enhancer. The formulations were evaluated for drug content, viscosity, pH, extrudability, homogeneity, skin irritation test, spreadability, and gel strength. A formulation containing 1.5% carbopol with 10% isopropyl myristate, showed better in vitro skin permeation through abdominal mouse skin, and was found to be the best.

For skin care, and the topical treatment of dermatological diseases, a wide choice of vehicles ranging from solid to semisolids and liquid preparations, is available to clinicians and patients. Within the major groups of semisolid preparations, the use of transparent gels has expanded, both in cosmetics and pharmaceuticals [1,2]. The effect of formulation additives on drug permeation through skin has been investigated [3,4], in which the permeation rate of a topical agent may be influenced by drug–vehicle, drug–skin, and vehicle–skin interaction. In the clinical assessment of a topical agent, the vehicle may significantly affect drug release and skin permeation, thereby altering biological activity [5-8]. Out of the various semisolids dosage forms, the gels are becoming more popular due to ease of application and better percutaneous absorption, than other semisolid preparations. The term ‘gel’, was introduced in the late 1800 to name some semisolid materials, according to pharmacological, rather than molecular criteria [9]. Structurally, a gel consists of a small amount of inorganic particles or organic macromolecules, mainly entangled polymers, interpenetrated by relatively large volume of liquids. Typical three dimensional structure, characteristic of the gels, comes from the links among the polymer chains [10]. Gels can resist the physiological stress caused by skin flexion, blinking and mucociliary movement, adopting the shape of the applied area, and controlling drug release [11-14]. Effectiveness of topical application mainly depends upon its rate, and extent of drug release from the base. A number of permeation enhancers used in different concentration in gel formulations, viz. isopropyl palmitate (10%), isopropyl alcohol (20%), dimethicone (2.3%), cyclomethicone (2.3%), etc.[15] To study the effect of vehicles on the barrier function of the stratum cornium, permeation experiments using skin as a membrane, are more meaningful [16]. Lincomycin hydrochloride (LMH), a systemic antibiotic, belongs to the group of lincosamides, is active against most of the gram positive bacteria. It has proved to be excellent for infectious diseases like acne, furunculosis, burns, and wounds [17]. LMH inhibits cell growth and burns, and wounds [17]. LMH inhibits cell growth and specifically with the 50S ribosomal subunit, at mutually related sites [18,19]. It is presently available as injections and capsules. As topical application of the drug at the affected site offers potential advantage of delivering the drug directly to the site of action, hence a study on LMH gels with different concentration of carbopol, and permeation enhancers like isopropyl myristate (IPM) and dimethyl sulfoxide (DMSO) [20,21], was taken up in the

As shown in Tables 1 and 2, a specific amount of carbopol 940 was soaked in water overnight. The required amount of drug (1%) was dissolved in this solution with stirring at 500 rpm, by a magnetic stirrer for 1 h. Carbopol was then neutralized with 0.5% triethanolamine. Glycerin 10% was added slowly with stirring, to obtain a clear gel. A similar procedure was followed for the formulations, containing permeation enhancer IPM, DMSO, and placebo formulations. To access the reproducibility of the procedure, three batches were prepared for each formulation.

Gel formulations were tested for various physicochemical properties. pH measurement of the gels were done by using a digital type pH meter (Mettler Toledo, S20 SevenEasy, Columbia, USA), by dropping the glass electrode and reference electrode completely into the gel system ,so as to cover the electrode. The extrudability of the formulations from the aluminium collapsible tubes, was determined using a universal testing machine, equipped with a 10 kg load cell (LF Plus, Lloyd Instruments, Hampshire, UK). Aluminium collapsible tubes filled with 10 g gels were held between two clamps positioned at a distance of 5 cm. The tube was compressed by the compression probe of 25 mm diameter, at a rate of 10 mm/s. The force required to extrude the gel from the collapsible tube was recorded. Measurements were run in six replicates, for each formulation. The viscosity of the prepared gels was measured using a Brookfield viscometer (model RVT), using spindle No. 4 and 7, at a controlled temperature of 25±2° at 50 rpm.The formulations showed torque between 50 to 90% at 50 rpm, which is the ideal range for determination of viscosity, therefore viscosity at higher rpm was not determined. The spreadability [22] of the gel formulations was determined 48h after preparation, by measuring the spreading diameter of 1g of the gel between two 20×20 cm glass plates after 1min. The mass of the upper plate was standardized at 125 g. The spreadability was calculated by using the formula S = m. l/ t, where S is spreadability, m is the weight tied to the upper slide, l is the length of the glass slide, and t is the time taken. Homogeneity of various gel formulations was tested by visual observations.

Gel strength of the formulations was measured using the Universal testing machine, as described by Lee et al. [23] and Chung et al., [24] with slight modification. Gel hardness was measured at room temperature using a 6 mm diameter probe, on the universal testing machine (Model, LF Plus, Lloyd Instruments, Hampshire, UK). The compression test was done with a 150 N weight beam, utilized with a crosshead and chart speed of 50 and 20 mm/min respectively, with a recovery period of 60 s between the end of the first compression and start of the second compression. The test consisted of two compression cycles, and the results were used to calculate the texture profile parameter cohesiveness, as explained by Bourne [25]. Hardness was defined as the maximum load stress attained on gel compression, whereas cohesiveness was defined as the minimum load stress on probe withdrawal from the gel. These parameters were measures of the resistance to penetration to withdrawal of the probe.

A specified quantity (1.0 g) of gel was dissolved in 10 ml of water, the volume was made up to 50 ml, and 5 ml of the above solution was further diluted to 50 ml with distilled water. The absorbance of the solution was measured spectrophotometrically at 194 nm. Placebo interference was not observed. The linearity of the method was found to be 99%. After exposing the product to light, heat, acid-base hydrolysis, and oxidation, there is no shift in the max was observed.

The diffusion study of gel formulations was performed using a modified Kashary Chein diffusion cell [27]. The cell was locally fabricated, and it had a volume of 12 ml in the receptor compartment, and an area of 1 cm2. Sigma dialysis membrane, D-0450 (Molecular weight 12,000) treated with 5% v/v of glycerol [28,29], were mounted between the donor and receptor compartments. Gel formulation (1 g) was applied uniformly on the Sigma membrane, and the compartment clamped together. The cell was placed in a water bath maintained at 37±1°. The receptor compartment was filled with Citrate phosphate buffer [30], pH 7.2, and the hydrodynamics in the receptor compartment was maintained by stirring with a magnetic bead at 500 rpm. At pre-determined time intervals, 1 ml of samples were withdrawn, and an equal volume of prewarmed buffer was replaced. The samples were analyzed, after appropriate dilution, for LMH content. Blanks were run for each set, as described above, using placebo gel.

The epidermal thickness was measured microscopically from 5 μm thickness microtomed. Sections, after staining with haematoxylin-eosin. The thickness was found to be 1.853×10-2 cm+0.12, from three measurements. Skin permeation studies of the prepared gels, were carried out using a modified Keshery Chein diffusion cell [33]. Pretreated abdominal skin of albino mouse was fixed onto the Keshery Chein diffusion cell. The 1 g gel was spread uniformly on an area of 1cm2 of the skin, previously fixed in between the donor and receptor compartment of the Kashary Chein cell. The receptor compartment contained 12 ml of citrate phosphate buffer, pH 7.2. The temperature of the elution medium was thermostatically controlled at 37+1° by a surrounding water jacket, and the medium was stirred with a bar magnet at 500 rpm, using a magnetic stirrer [34]. Aliquots of 1 ml withdrawn at predetermined intervals over 8 h, and an equal volume of pre-warmed buffer, was replaced. The samples were analyzed, after appropriate dilution, for LMH content spectrophotometrically at 194 nm [26]. Blanks were run for each set as described above, using placebo gel. The results were plotted, as cumulative amount released (Q), versus time (t). Figs. 1 and 2 depict Q versus t plot of gel formulations, with and without permeation enhancer IPM and DMSO. 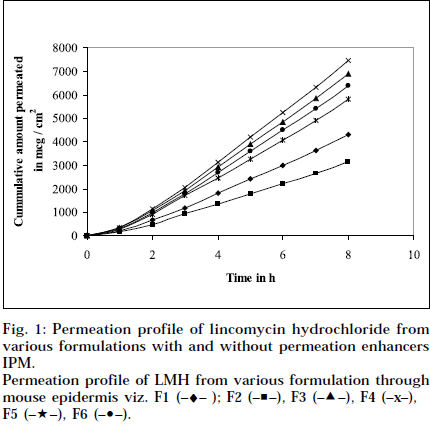 Fig. 1: Permeation profile of lincomycin hydrochloride from various formulations with and without permeation enhancers IPM. 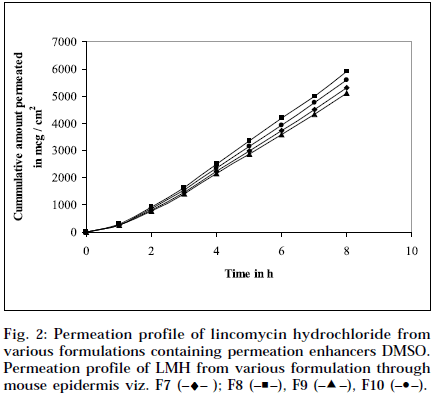 The epidermal flux of LMH for lipidized and delipidized albino mouse skin was determined from Fick’s law. The steady state flux was determined from the slope of the linear portion of the plot of the cumulative amount release (Q), against square root of time plot. The lag time was determined by extrapolating the linear portion of Q, versus t curve to the abscissa. The enhancement factor (E) [37] was calculated as the ratio of the permeation rate of LMH from the formulation with enhancer, to that from the controlled system without enhancer.

The skin irritation test was performed in the New Zealand white rabbit, by applying 1 g gel formulation on 9 cm2 area, saturated drug solution (1ml) soaked in 9 cm2 cotton wool. An aqueous solution of 1ml, containing 0.8% formalin soaked in 9 cm2 cotton wool (standard irritant) was placed in the back of the rabbit. The cotton wool was secured firmly in place with adhesive plaster. The animals were observed for 7 d for any sign of edema and erythrema.

Composition and physicochemical characteristics of the gel formulations containing carbopol 940 as gelling agent, and different concentrations of permeation enhancer viz. IPM and DMSO, are shown in Tables 1 and 2. From the results, it is clearly evident that all the gel formulations showed good extrudability, homogeneity, and spreadability. The force required to extrude the gel formulations from the collapsible tube, varies from 14.868 to 17.985 N where, as the results of spreadability varies from 21 to 30 g×cm/sec. The formulations viscosity ranged from 7351 to 8150 cps., and they showed gel strength between 1285 to 1535 N/g. The results of cohesiveness vary from 0.340 to 0.380 N/mm. The results indicate that as the gel strength increases, the cohesiveness decreases. The gel strength increases with increase in Carbopol 940 concentration. The high gel strength might be related to the lower degree of polymer network in the gel. The drug content was in the range of 98.5% to 101.1%. The pH of all the formulations was between pH 6 and pH 7, which lies in the normal pH range of the skin [39], and did not produce any skin irritation. Figs. 3 and 4 depicts the in vitro diffusion profile of LMH from gels containing different concentrations of carbopol 940, and permeation enhancers IPM and DMSO. The total amount of drug release for a fixed period of 8 h, was found to decrease with increase in carbopol concentration. Even though a good drug release was observed with 1% carbopol, as it was soft and less viscous in nature, and an optimum polymer concentration of 1.5%, which showed good consistency, was found to be suitable. On comparing the diffusion profile of carbopol gel containing different permeation enhancer viz. IPM and DMSO in different concentrations, it indicates that the IPM containing formulations showed better diffusion of drug through Sigma membrane, compared to DMSO containing gel formulations. Figs. 3 and 4 depicts the in vitro skin permeation profile of LMH from gels. The skin permeation showed a similar pattern as that of the diffusion profile. 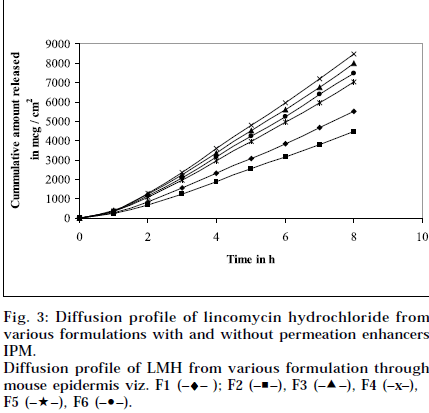 Fig. 3: Diffusion profile of lincomycin hydrochloride from various formulations with and without permeation enhancers IPM. 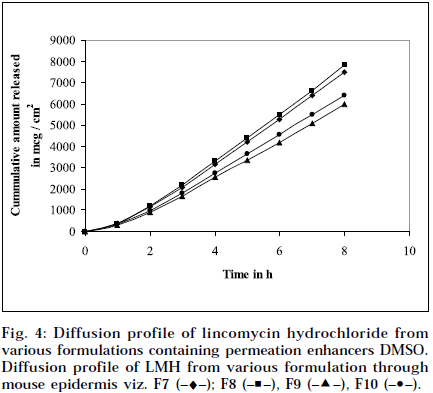