Macrophage stimulating protein receptor, recepteur d’origine nantais (RON), belongs to the tyrosine kinase receptor in the MET proto-oncogene family. Studies have found that RON is highly expressed in bladder cancer and its expression is correlated with the prognosis of patients with bladder cancer[4], but its role and related mechanism in bladder cancer remain to be clarified. Emodin, chemically known as 1,3,8-trihydroxy-6- methylanthraquinone, molecular formula: C15H10O5, molecular weight: 270.23, is one of the main active components of traditional Chinese medicine rhubarb and is also abundant in many traditional Chinese medicines such as Polygonum cuspidatum, Polygonum multiflorum, Radix Dioscorea and Lilium lilium. Studies have shown that emodin can inhibit the growth of lung adenocarcinoma cells[5], human glial cells[6], human chronic myelogenous leukemia cells[7], human rectal cancer cells[8] and other tumor cells, but the mechanism of its anti-tumor action is still unclear. Cp-1 is a small molecule inhibitor of tyrosine kinase RON activity. Cp-1 is a small molecule inhibitor of receptor tyrosine kinase RON activity. It has been found that emodin can exert a certain inhibitory effect on tyrosine kinase, but its mechanism has not been reported yet. In this study, RON inhibitor Cp-1 and emodin were combined to act on bladder cancer cell line BIU-87 to observe the changes of cell proliferation and apoptosis and to explore the mechanism.

This work was supported by the Fund of clinical study on the prevention Methods of neonatal nasal injury during nasal continuous positive airway pressure (No. FY2019-105).

BIU-87 cells were cultured in RPMI-1640 medium containing 10 % fetal bovine serum, placed in a 5 % CO2, 37° constant temperature and humidity incubator, to keep the cells in a monolayer adherent growth. The cells were digested and passaged with trypsin containing 2.5 % EDTA every 2 d.

The cells in the logarithmic growth phase were digested with trypsin, and 100 μL (containing 5×103 cells) of the suspension was seeded in a 96-well plate. After the cells adhered, the corresponding drugs were added to each group. After 72 h, add 20 μL of MTT (5 mg/mL) to each well and incubate in a cell culture incubator. After 4 h, centrifuge at 1200 r/min for 10 min and discard the supernatant. Add 200 μL of DMSO to each well and mix on a shaker for 30 min until the crystals are completely dissolved. Use a microplate reader to measure the Optical Density (OD) value at a wavelength of 530 nm. Cell survival rate= (experimental group OD valueblank group OD value)/(control group OD value-blank group OD value)×100 %. The experiment was repeated three times.

1×105 logarithmic growth cells were seeded into 6-well plates and cultured for 24 h. The original culture medium was discarded after cells attached the wall. Add the appropriate medicine. 72 h later, all the cells were digested by trypsin and collected in a 5 ml test tube. The cells were centrifuged at 1500 r/min for 5 min. Remove the supernatant, and wash once with physiological saline. Add 1×Binding Buffer to adjust the cell concentration to 1×106/mL and take 100 μL (1×105 cells) into a new 5 ml test tube. Add 5 μl Fluorescein isothiocyanate (FITC) and 5μl Propidium Iodide (PI) to each tube and hide tubes from light for 15 min at room temperature. Add 400μL 1×Binding Buffer before loading, and the cell apoptosis was observed by flow cytometry within 1 h. The experiment was repeated for 3 times.

Take 1×105 cells in the logarithmic growth phase and inoculate them in a 6-well plate and culture for 24 h. After cells sticking to the wall, the original culture medium was discarded and corresponding drugs were added to each group. The cells were collected after 48 and 72 h of treatment and the total RNA of each group was extracted according to the Trizol kit instruction. The total RNA was reverse transcribed into the first strand of Complementary DNA (cDNA) by Promega reverse transcription kit.

Take 1×105 cells in the logarithmic growth phase and inoculate them in a 6-well plate and culture for 24 h. After cells sticking to the wall, the original culture medium was discarded and the corresponding drugs were added to each group. The cells were collected after 48 and 72 h of treatment and the protein was extracted according to the total protein extraction kit. The total protein concentration of the cells was determined by Bicinchoninic acid (BCA) assay method.

The results were statistically processed with Statistical Package for the Social Sciences (SPSS) 20.0 statistical software. Measurement data were expressed as x±s. One-way Analysis of variance (ANOVA) was used in compare among multiple groups. p<0.05 was considered statistically significant.

Table 1: Comparison of Cell Proliferation Inhibition Rates in Each Group 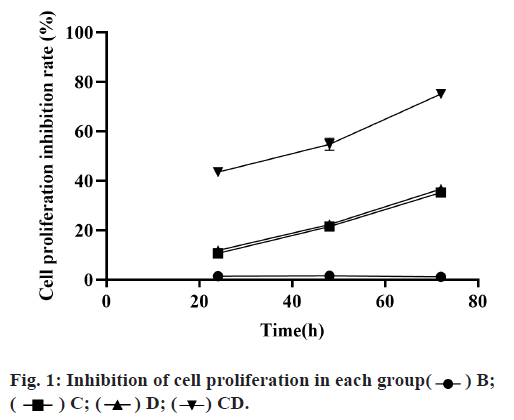 Fig. 1: Inhibition of cell proliferation in each group(

Table 2: Comparison of the Proportion of Apoptosis in Each Group 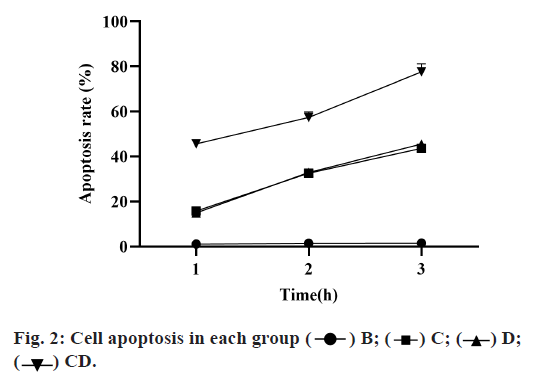 Fig. 2: Cell apoptosis in each group(

In group B, the relative of RON mRNA and protein expression in each group at 72 h after drug adding was shown in fig. 3. The experimental results showed that compared with group B, the expression of each intervention group was significantly decreased and the difference was statistically significant (p<0.05), among which the expression of group CD had the greatest change and the difference was statistically significant compared with group C and D (p<0.05), but there was no significant difference between group C and D (p>0.05). The results showed that emodin inhibited tyrosine kinase and had a synergistic effect with Cp-1. 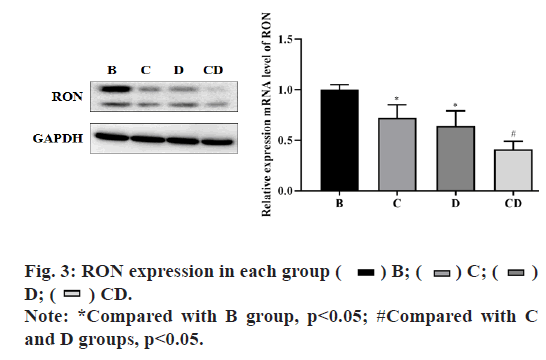 Fig. 3: RON expression in each group ( 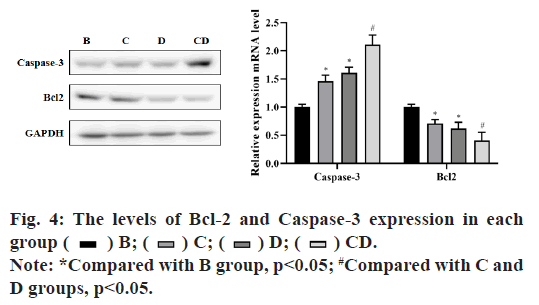 Fig. 4: The levels of Bcl-2 and Caspase-3 expression in eachgroup (

Bladder cancer is a heterogeneous tumor with a high incidence in men and is the fourth leading cause of death from cancer in men. Studies have confirmed that heavy drinking and smoking are risk factors for bladder cancer[9]. The choice of treatment depends on the tumor pathological grade and stage, primary tumor resection or combined with bladder perfusion of chemotherapy drugs were mainly used for early non-muscular infiltrating bladder cancer, while radical cystectomy was mainly used for muscular infiltrating bladder cancer and the prognosis of patients was significantly improved with the combined application of neoadjuvant systemic chemotherapy and radiotherapy[10]. However, bladder cancer has a very high rate of recurrence and metastasis. Currently, there is no effective treatment for recurrent and metastatic bladder cancer, so it is particularly important to develop a new treatment method.

In recent years, epigenetic regulation has gradually become a focus of tumor research and the existence of abnormal epigenetic regulation in tumors has been gradually confirmed. Drugs targeting epigenetic regulation have been applied in clinical trials and are very promising[7,11]. RON receptor tyrosine protein kinase can act as a common signal transduction component in a variety of signal transduction pathways. It can regulate gene expression, participate in a series of important biological processes such as cell cycle, cell growth, apoptosis and inflammation is related to the occurrence and development of tumors. Cp-1, as the RON inhibitor, can bind to Cys-773 in the catalytic domain of growth factor receptor and RON receptor in a ratio of 1:1 to block the signaling pathway of RON receptor-tyrosine kinase. It has been reported in the literature that compared with normal cells, the growth and progress of RON positive tumor cells more significantly rely on RON signal transduction[12,13]. Blocking the RON signaling pathway can significantly impair tumor viability in vivo and in vitro and enhance its response to radiation and cytotoxic mediated killing. Emodin is a natural anthraquinone derivative first extracted from rhubarb and is a tyrosine kinase inhibitor[4]. Its role in inducing tumor cell apoptosis[14], anti-tumor drug sensitization[6], inhibiting tumor angiogenesis[3] and other aspects has attracted widespread attention. In this study, RON inhibitor Cp-1 was combined with emodin to act on bladder cancer cells, the results showed that in group C, D and group CD, RON expression level of cells decreased obviously and the cell survival rate was lower than that in group C and D and the cell survival rate is lowest in group CD. The differences group C and D were statistically significant. This suggests that the Cp-1 and emodin can inhibit the expression of RON, and can significantly inhibit bladder cancer cell proliferation and the two have a synergistic effect.

Apoptosis is a programmed death and an important selfstabilizing mechanism of the organism. The general apoptotic pathways are divided into endogenous (mitochondrial) and exogenous pathways. The Bcl- 2 proto-oncogene is located on the mitochondrial membrane and plays an inhibitory role in apoptosis and is the common intersection of various signal transduction pathways. Overexpression of Bcl-2 can enhance cell resistance to most DNA damage factors and inhibit target cell apoptosis induced by most chemotherapeutic drugs[8]. The results of this study showed that Bcl-2 was highly expressed of bladder cancer cells in the control group and the expression of Bcl-2 was down-regulated after the intervention of Cp-1 and emodin and the expression level of Bcl-2 was the lowest in the combined treatment group. Caspase-3 is a very important protein molecule in the apoptosis and many apoptosis pathways induce apoptosis through Caspase-3 signal transduction[15]. Our results showed that compared with group B, the expression of caspase-3 in groups C, D and CD was significantly increased and the expression level in group CD was the highest. Therefore, it can be inferred that both Cp-1 and emodin may induce early apoptosis of bladder cancer cells by down-regulating the expression level of Bcl-2 and inducing the increase expression of caspase-3.