Effects of Plumbagin on Proliferation, Invasion and Migration of Glioma Cell Line U-118

Figure 1: Effects of different concentrations of plumbagin on the proliferation of U-118 cells

The results of scratch test showed that the U-118 cells in the control group migrated to the edge of the scratch rapidly after 24 h and the width of the scratch became narrower. After treatment with 10, 20, 50 and 100 μmol/l of plumbagin, the rate of cells crawling toward the scratch edge was significantly reduced and the repair of the scratch defect was slowed. In addition, with the increase of the concentration of isoquinone, the plane movement ability of cells decreased significantly, as shown in fig. 2. Transwell analysis showed that the invasion of U-118 cells was significantly inhibited by plumbagin in a dose dependent manner, as shown in fig. 3. Compared with the control group, the expression of MMP-2 and MMP-9 protein in U-118 cell line was significantly decreased after 12 h treatment with different concentrations of plumbagin, while p21 protein expression was significantly increased with the increase of plumbagin concentration, as shown in fig. 4. Glioma is the most aggressive primary brain tumor, characterized by diffuse infiltration into normal brain parenchyma. Conventional standard treatment (surgical resection, adjuvant chemotherapy and radiotherapy) cannot completely cure glioma[8,9]. The prognosis of malignant glioma is poor and the median survival rate has not significantly improved in the past 40 y[10]. The antitumor effect of benzoquinone has been reported in the early studies[4]. It can inhibit the proliferation and induce apoptosis of glioma cells through p21, while there are few reports about the effect on cell migration and invasion. Our study showed that plumbagin significantly inhibited the growth of U-118 cells in a dose dependent manner. In addition, cell scratch and Transwell invasion results showed that plumbagin significantly decreased the migration and invasion of U-118 cells. Adhesion, as a starting condition for cancer cell invasion, cancer cells adhere to extracellular matrix components fibronectin (FN), LN and type IV collagen through integrins on the cell membrane, activate and secrete matrix metalloproteinases, degrade basement membrane and then migrate and move under the action of chemokines to achieve the results of invasion and metastasis[10,11]. The inhibition of adhesion, invasion and metastasis of cancer cells is the key to anti-tumor therapy and plumbagin inhibits the movement and invasion of U-118 cells. We speculate that even if some primary cancer cells are not killed, the probability of metastasis will be reduced due to the decrease of exercise ability, thus reducing the recurrence rate of glioma. The mechanism of plumbagin to U-118 cell motility and invasion has become a question of our thinking. In view of the fact that many molecules and signal pathways are involved in the process of tumor invasion and metastasis, these molecules and signal pathways play a role in all aspects of the tumor invasion and metastasis process and MMP is an important part of these molecules[12]. With the above resuIts, it is cIearIy evident that plumbagin outdo many other existing drugs interms of patient recovery, quaIity of Iife and over aII satisfaction rate. Previous studies have reported that MMP is a key molecule in regulating the invasion and metastasis of glioma cells by various drugs and molecules and MMP-2 and MMP-9 are closely related to the prognosis of patients with glioma[13-16]. We further observed the changes of MMP-2 and MMP-9 in the process. We found that the protein expression of MMP- 2 and MMP-9 in U-118 cells decreased significantly after plumbagin treated U-118 cells, suggesting that plumbagin inhibits the invasion and metastasis of U-118 cells by inhibiting the expression of MMP-2 and MMP-9. In conclusion, plumbagin could inhibit the human glioma U-118 cell proliferation, invasion and migration. This effect may be achieved by inhibiting the expression of MMP-2 and MMP-9, but the specific mechanism needs further study. 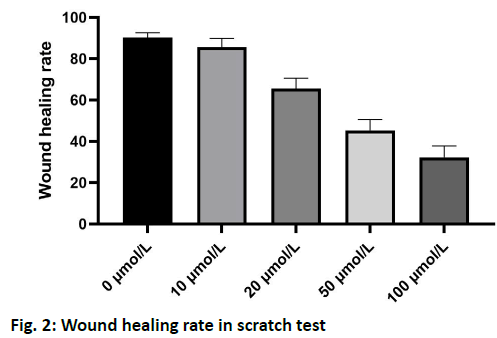 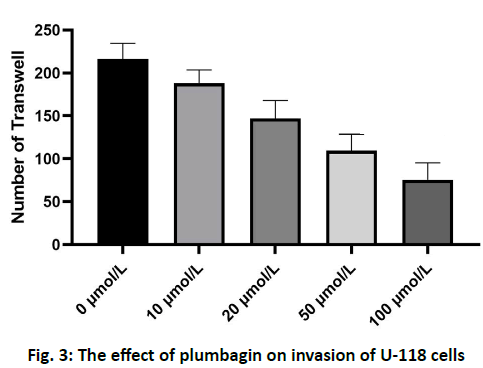 Figure 3: The effect of plumbagin on invasion of U-118 cells 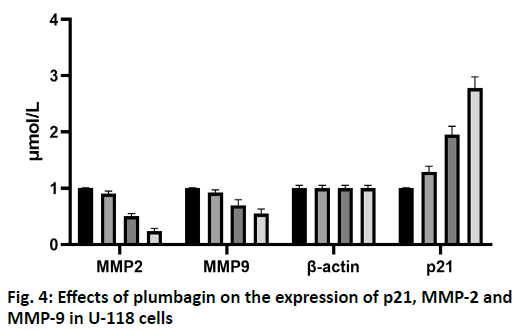 This work was supported by the National Natural Science Foundation of China (No. 81773803), the 2018 Research Startup Fund of Yanjing Medical College, Capital Medical University (No. 18qdky08).