The present paper describes enhancement of lignans, phyllanthin and hypophyllanthin present in Phyllanthus amarus plant. Supplementation was done to enhance secondary metabolites by modifying the media and treatment with different growth promoters and abiotic elicitors to increase the content of hepatoprotective bioactives in immobilized cell cultures, after incubation for 21 days. MS medium was supplemented with gibberellic acid and to make whole process commercially viable, when coconut water, sugarcane juice and water-melon extract were treated, it was revealed that watermelon extract, enhances maximum phyllanthin and hypophyllanthin yield followed by sugarcane juice, coconut water and gibberellic acid after estimation by HPTLC. The present method was found to be accurate, economical and viable to enhance the content of phyllanthin and hypophyllanthin in P. amarus for large-scale commercial production.

To meet the increasing demand for plant-based drugs, immobilization of plant cells is a viable alternative method for production of therapeutic bioactives and enhancing their yield by treatment with different phytohormones, precursors and abiotic elicitors. Review of literature revealed that although large number of plants possess hepatoprotective activity, the P. amarus cells has proven hepatoprotective potential [2].

Phyllanthus amarus (Euphorbiaceae) commonly called Bhui amla, though common to central and south India, is indigenous to the rain forests of Amazon and other tropical areas of world. Due to its hepatoprotective property, it is in great demand. However, very less herbage, short growth duration (July to October) and requirement of damp weather for growth, are the factors responsible for the short supply of P. amarus [3].

Hence it was thought worthwhile to undertake systematic investigations to explore the hepatoprotective bioactives of P. amarus under the influence of different carbon sources and growth promoters for the enhanced production of phyllanthin and hypophyllanthin using plant immobilized cell cultures.

Sterilization of leaves and preparation of alginate beads

Fresh leaves of P. amarus were weighed (25 g) and washed with running tap water, followed by 2% soap solution, rewashed thoroughly with distilled water, and then sterilized with 70% ethanol. The leaves were subsequently surface sterilized with 0.1% mercuric chloride, washed thoroughly with sterilized water to remove traces of mercuric chloride, and then crushed finely using sterilized pestle mortar. Thus obtained suspension was passed through 40 mesh to get leaf homogenate [4].

Dehydrated MS medium was selected with vitamins and sucrose, but without CaCl2, indole acetic acid, kinetin and agar (Product code PT 010 of Himedia Lab. Pvt. Ltd. Mumbai) was accurately weighed (34.1 g) and aseptically transferred to a sterilized flask, containing 600 ml sterilized double distilled water and adjusted to pH 5.6. The volume of flask was made to 1000 ml with sterilized distilled water and shaken vigorously in laminar airflow bench. The prepared MS medium was stored at 2-8º in refrigerator away from direct light and the desired amount of MS medium was dispensed aseptically in sterile culture flasks [5].

It promotes growth and causes elongation of cells in low concentration. A stock solution of 1:10000 gibberellic acid was made with sterilized distilled water. To four sets of conical flasks labeled as JCcontrol without any treatment, J1- 30, J2- 60 and J3- 90 ml containing gibberellic acid solution along with 25 g of alginate beads of P. amarus and to each flask 100 ml MS medium was added. After 21 days of incubation with shaking, 20 ml of sample from each flask was withdrawn and the collected samples were subjected to HPTLC analysis for phyllanthin and hypophyllanthin (Table 1).

Readings are average mean of 4 sets of flasks

Following the above described procedure, beads were prepared from leaf homogenate using 25 g of fresh leaves of P. amarus in aseptic condition. To each of three sets of flasks labeled, J4, J5 and J6, 100 ml MS medium was added. Subsequently 30, 60 and 90 ml of fresh sugarcane juice filtered by syringe using Whatman filter (0.2 micron sterile, non-pyrogenic, polyethersulfone membrane of 25 mm diameter) was added to flasks J4, J5 and J6, respectively and after incubation for 21 days, 20 ml sample was collected for HPTLC analysis (Table 1).

It is a natural isotonic solution obtained from coconut fruit (Cocos nucifera). Fresh coconut water 30, 60 and 90 ml filtered by sterilized Whatman membrane filter, using syringe at 250 was added to three sets of the flasks containing 25 g alginate beads of P. amarus leaves. The flasks supplemented with coconut water were labeled as, J7- 30, J8- 60 and J9- 90 ml of coconut water along with 100 ml MS medium, in each flask and after 21 days, 20 ml sample from each flask was withdrawn for HPTLC analysis (Table 1).

Watermelon (Citrulles vulgris) was purchased from the local market and the juice was extracted from its pulp in a blender. Freshly prepared watermelon extract was filtered by sterilized Whatman membrane filter, using syringe at 25º under aseptic conditions. The flasks in triplicate containing 25 g alginate beads of P. amarus leaves were labeled as J10- 30, J11- 60 and J12- 90 ml of watermelon extract, along with 100 ml MS medium in each set of sterilized flasks. All flasks were incubated with shaking at a speed of 80-100 rpm for 21 days and 20 ml sample was withdrawn from each flask for estimation of phyllanthin and hypophyllanthin by HPTLC (Table 1). The average cell viability in MS medium, which was found to be 66% using UV fluorescence microscope for control and all four treatments in immobilized cell cultures of P. amarus.

Estimation of bioactives by HPTLC

Calibration curves were plotted, after calculating the factor × area divided by amount of sample applied and the percentage in w/w was reported, of different treated samples as per concentration and a comparative table was made to calculate the percentage enhancement as compared to control. All the HPTLC estimation was done at Indian Herbs and Research Supply Co. Ltd., Saharanpur (UP) India and they also gifted the reference standard sample of phyllanthin and hypophyllanthin.

The study performed in the plant biotechnology laboratory revealed that addition of abiotic elicitors gibberellic acid, sugarcane juice, coconut water and watermelon extract enhanced the production of phyllanthin and hypophyllanthin in immobilized P. amarus cell cultures. A significant rise of 0.004 and 0.006% of phyllanthin and hypophyllanthin occurred with the addition of 30 ml gibberellic acid solution, 0.006 and 0.007% with 60 ml and 0.007 and 0.009% with 90 ml (129%) maximum increase as compared to control 0.003 and 0.004%, which was concentration-dependent (figs. 1 and 2). 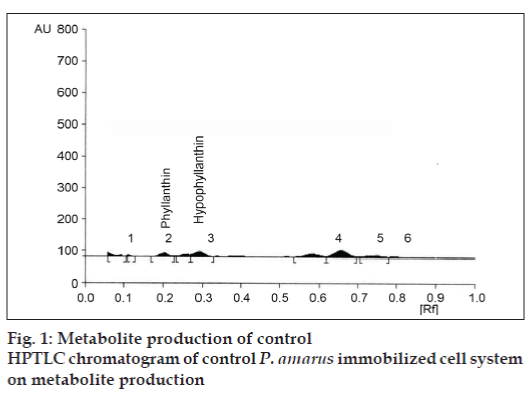 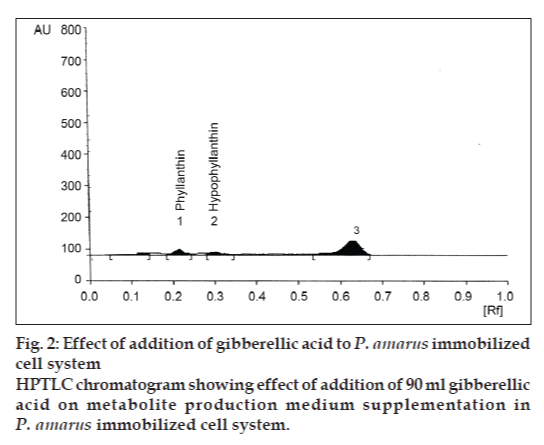 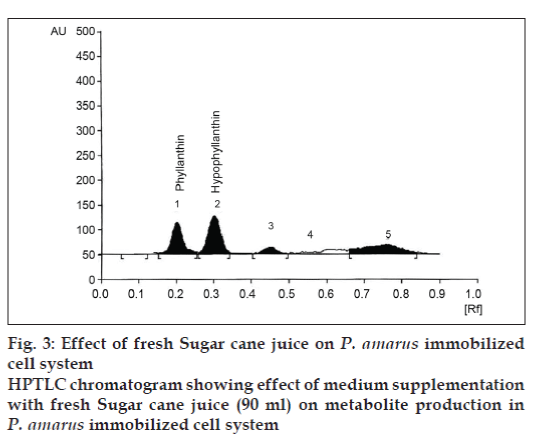 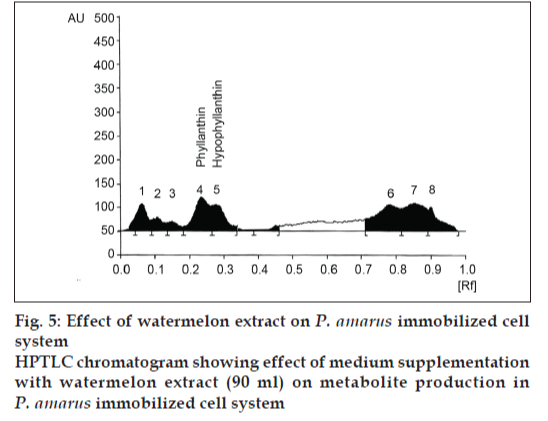 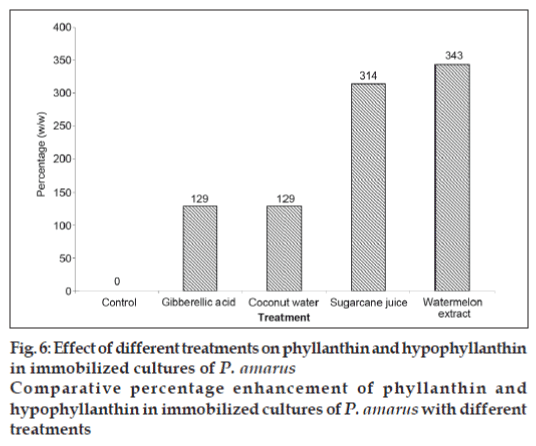 It is evident from our studies that manipulation of media, sucrose level as well as the concentration of other nutrients are important for optimum phyllanthin and hypophyllanthin production. Literature revealed that sugar act as an agent as well as carbon sources in plant suspension cultures [8]. It also affects cell differentiation and regulates gene expressions in cultures. The detailed study of sugar metabolism on enzyme activities and of phyllanthin biosynthetic pathway is required to elucidate the signal transduction process leading to the activation of secondary metabolism [9].

The data in Table 2 revealed that the comparative enhancement of phyllanthin and hypophyllanthin in immobilized cell system with the highest yield found after different supplementations, as compared to control content, it was seen that the watermelon extract (as carbohydrate substitute) had highest 343%. Enhancement followed by fresh sugarcane juice 314%, coconut water 129% and gibberellic acid 129% when compared to control, which was 0.007% in MS medium (fig. 6). 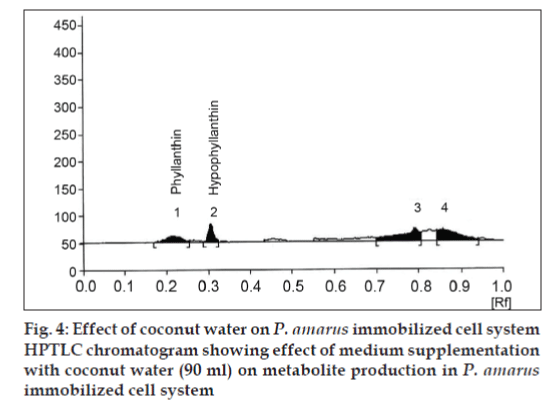 Table 2: Comparative Enhancement Of Phyllanthin And Hypophyllanthin In Immobilized Cultures With Different Treatment

The efficiency of elicitation depends on elicitor specificity, cell line of elicitor used, presence of growth regulators, composition of culture medium and the environmental conditions. Elicitation of immobilized Plumbago rosea cells with chitosen proved highly effective by using an extra cellular site for the product accumulation where plumbagin production was increased about 21 times by collective use of immobilization, elicitation and two phase culture [10]. Dicosmo and Misawa [8] reported maximum vindoline accumulation within 14 days with 0.1 μm methyl jasmolate in shoot cultures of Catharanthus roseus.

From the above study it is hereby concluded that the calcium alginate gel is a suitable carrier for P. amarus cell immobilization, as it maintains the cell viability and cell integrity at the same extent as that of freely suspended cells, to preserve the metabolic activity of cells for long duration under controlled environment conditions [11].

This effort is a sincere attempt in the direction of realizing the commercial biotechnological production of bioactive phytoconstituents i.e. phyllanthin and hypophyllanthin from P. amarus and the objective of enhancing the yields of hepatoprotective bioactives has been achieved through supplementation of carbon sources and growth promoter in immobilized cell cultures of P. amarus.