During the past 30 y the incidence of adenocarcinoma of esophagogastric junction (AEG) in the Western countries has been on the rise. According to the latest study of epidemiology in the United States, the incidence of AEG has increased by 5-10 % per year since the mid-1970s[1-3]. Since the growth position of AEG lies between the stomach and the esophageal fundus, the definition and classification of AEG have been controversial, thus clinical studies of AEG were relatively few. AEG was often classified as either gastric cancer or esophageal cancer, resulting in the lack of contrast between the results of relevant studies, so the best treatment for AEG is still unclear. At present, surgical eradication or chemo radiotherapy was usually used to treat AEG, but its prognosis was poor. Although the diagnostic and therapeutic techniques such as radical resection, chemotherapy or radiotherapy have been improved, many AEG patients often have recurrence and metastasis and the total survival time was still not optimistic[4].

Nuclear-associated antigen Ki-67 (Ki-67) is a nonhistone in the nucleus, which was composed of two polypeptide chains and existed in the whole cell cycle. The expression of Ki-67 varies with the cell cycle, there was no expression in the G0 phase and it appeared in the middle to late phase of G1, increased gradually in the phase of S to G2, reached the peak in phase of M1 and degraded rapidly or lost antigenic determinant after phase M. Ki-67 was one of the most commonly used markers reflecting cell proliferation, and also the major focus of many researchers[5-7].

In this study, immunohistochemistry was used to detect the expression of Ki-67 protein in AEG, to explore its relationship with the biological behavior and clinicopathological characteristics of AEG and to provide a theoretical basis for the further study of the occurrence, development mechanism, and early treatment of AEG.

The AEG and adjacent tissue samples were collected from First Affiliated Hospital of Guangdong Pharmaceutical University pathology from January 2007 to June 2017. With 130 males and 35 females, 79 cases were aged below 65 y, 86 cases were over 65 y. Ninety one cases of middle and high differentiation tumors, 74 cases of poorly differentiated (G3) tumors were grouped according to the degree of differentiation. One hundred and twenty-eight cases of stage I/II, 37 cases of stage III/IV were grouped according to TNM classification. Thirty cases of lymphatic metastasis more than 7, and 135 cases were less than 7.

The tissues were fixed in 10 % neutral formalin solution, then dehydration, hyalinization, and embedded into paraffin wax. Each sample was made into 5 slices (4 μm), one for HE staining, 3 for immunohistochemical staining and the other kept as a standby. All the slices were stained by immunohistochemistry and HE. Antibodies were purchased from Abcam (Cambridge, UK). The slices were deparaffinized, antigen heat repaired by autoclave. The endogenous peroxidase activity was blocked with 3 % H2O2 and incubated with the first antibody at 4° overnight. Then, the slices were washed with PBS for 3 times and incubated with polymerase adjuvant at 37° for 20 min, with HRP labelled goat antimouse IgG at 37° for 30 min. Color development of the slices was done with DAB solution, washed under running water, then re stained, dehydrated, hyalinized and mounted for microscopy.

According to cell staining intensity score, colorless 0, light yellow 1, medium yellow 2, brown yellow 3 and brown 4. Five fields of vision were randomly selected under 100 X magnification on a microscope and 100 cells were counted in each field. The average percent of positive cells in the 5 fields was counted as 0-100 %. The staining fraction was the product of the staining intensity and the percent positive cells, the total score was 0~400 points. Patients were divided into 2 groups according to the average staining score of tumor samples, the high expression group with higher staining score of tumor samples and the low expression group with lower staining score.

According to the dyeing strength[8,9], the levels of Ki- 67 were higher in AEG tumor (fig. 1), 165 cases of AEG were divided into the high expression group (90 cases) and low expression group (75 cases). The overall survival (os) curve of the 2 groups was shown in (fig. 2). In the 165 cases of the primary AEG tumor, the positive expression of Ki-67 protein was related to the tumor size (p=0.002), lymphatic metastasis (p=0.030), recurrence and metastasis (p=0.019) and adjuvant chemotherapy (p=0.014). And it was independent of tumor type, Siewert classification, histological differentiation, neurovascular invasion, and clinical staging (p=0.295), which were shown in (Table 2).

Table 2: Relationship between the Level of Ki-67 Protein and Clinicopathological Characteristics

Figure 1: Immunofluorescence staining of Ki-67 in the AEG tumor tissues 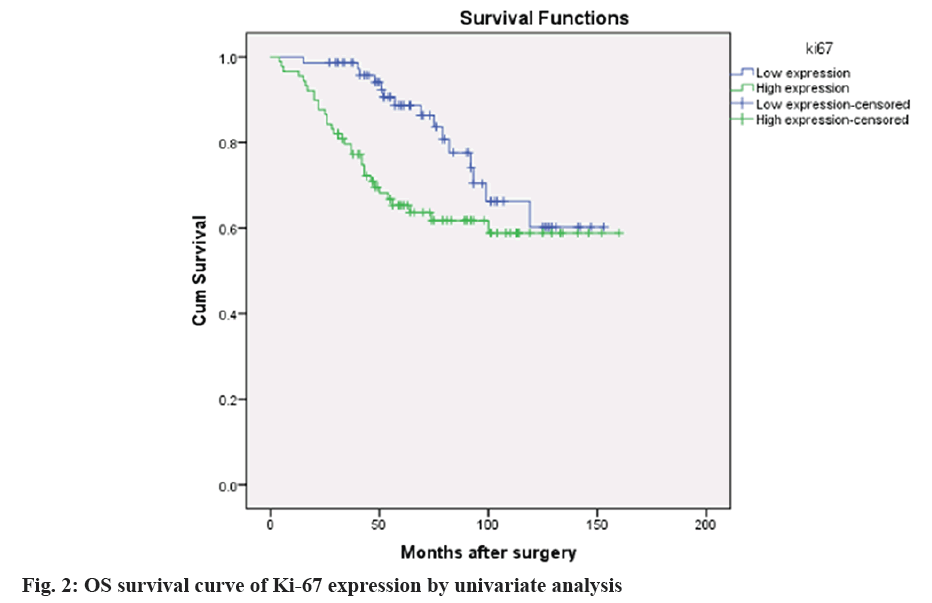 The 165 AEG patients were divided into the high Ki- 67 expression group and low Ki-67 expression group. There was a significant difference in the recurrence and metastasis between tumor differentiation and the expression of Ki-67 (p<0.05). And there was no significant difference in gender, age, Siwert classification, neurovascular invasion, clinical stages, surgical approaches, and adjuvant chemotherapy (p>0.05), which were shown in (Table 3).

Esophageal carcinoma, AEG and gastric adenocarcinoma were the most common cancers worldwide[9,10]. In addition, there has been a significant increase in the incidence of cancer at the gastroesophageal junction in the past decade, with gastroesophageal adenocarcinoma accounting for the vast majority of gastroesophageal junction cancers in East Asia[11,12]. Compared to other gastric cancers, AEG was more prone to deep invasion of the gastric wall, lymphatic metastasis, and postoperative recurrence. Besides, the prognosis of patients with these types of cancer was very poor[13,14]. Although in recent years, with the improvement of technology and the application of new drugs, the treatment of AEG has been improved to some extent, but its metastasis and recurrence was still an urgent problem that needed to be solved[15-17]. Therefore, discovering new treatment methods for AEG may provide new methods and hope for the treatment of cancer.

This retrospective study focused on the effect of the over-expression of Ki-67 on the prognosis of AEG patients. The results showed that the expression of Ki- 67 was significantly different in tumor size, lymphatic metastasis, recurrence and metastasis (p<0.05). In univariate analysis, there were significant differences in tumor differentiation and Ki-67 expression among different prognostic results (p<0.05). Cox regression analysis showed that Ki-67 was an independent predictor of prognosis. To our knowledge, this is the first time to show that the high expression of Ki-67 status is associated with poor prognosis of AEG. The present data suggested that higher the expression of Ki-67, more likely the recurrence and metastasis were leading to worsening of prognosis. Therefore, these results suggested that Ki-67 was an important molecular marker for predicting the prognosis of AEG and a potential target for the treatment of AEG.

Ki-67 antigen was a nuclear antigen found in proliferating cells as reported by Gerdes et al. in 1983[18] and it is also recognized as a nuclear proliferation marker. Ki-67, was also called Ki-67 antigen or MKI67. As a DNA binding protein, Ki-67 was mainly located in the nucleus and was related to the cell proliferation. Ki-67 has been widely used as one of the important markers of cell proliferation due to its presence in stationary cells (G0) but lack in G1 phase[19,20]. Ki-67 was one of the most common tumor prognostic markers[21-23] and can also be used as a biomarker to identify high-risk individuals with precancerous lesions[24]. Poor prognosis of high Ki-67 expression in tumor tissues[25,26]. In addition to traditional parameters, Ki-67 has been recommended as a key factor in tumor treatment decisions[27]. Many studies have found that the higher Ki-67 expression was associated with poor prognosis in breast cancer, prostate cancer, and some other cancers[23,28,29]. Interestingly, as an independent marker of colorectal cancer, higher Ki-67 expression was found to be associated with favourable clinical outcomes[30]. Previous studies have confirmed that the expression of Ki-67 was also correlated with the progression of colorectal cancer[31,32], while the high expression of Ki-67 was associated with poor prognosis and severe differentiation of OSCC patients. These conflicting results could be partly due to the biological characteristics of various tumors.

Previous data have shown that the tumor proliferation activity was heterogeneous[33]. Tumor microenvironments containing multiple cells, such as matrix FLC, immune cells and endothelial cells, influence tumor progression through complex communication with TC[34]. Therefore, it is necessary to evaluate the expression of Ki-67 in hyper-proliferation regions. Low Ki-67 expression in Duke B colorectal cancer was associated with poor prognosis[32]. In addition, Ki-67 combined with HIF-1α and CK20 can be used as a prognostic biomarker in colorectal cancer tissue microenvironment[35]. Therefore, the expression of tissue Ki-67 and its clinical prognosis were still uncertain.

Studies have shown that Ki-67 antigen was closely related to lung cancer, lumbar tumor, breast cancer, head and neck cancer, digestive tract tumor and might be associated with the occurrence, development, classification, staging, invasion, metastasis, recurrence, and prognosis of these tumors[22,24,36]. It can be used as a marker for diagnosis, prediction of curative effect, and prognosis. In this study, the high expression rate of Ki-67 antigen in AEG tissues was 54.5 %. The high expression of Ki-67 was significantly different in the size of the tumor, the number of lymphatic metastasis, recurrence and metastasis (p<0.05). However, there was no significant difference in age, gender, tumor type, Siwert classification, clinical stage, surgical procedure and histological differentiation (p>0.05). At the same time, this study showed that there was significant difference in the survival curve of OS in patients with high or low Ki-67 expression. The Cox regression model was used to predict the factors related to recurrence and metastasis. The results showed that Ki-67 (HR=0.860, 95 % CI=1.145~4.881; p=0.020) was an independent prognostic factor for primary AEG. These results suggested that Ki-67 was related to the diagnosis and prognosis of oesophageal carcinoma. In conclusion, up-regulation of Ki-67 gene expression is closely related to the occurrence and development of AEG, which is helpful to evaluate the malignant degree and prognosis of AEG patients.

Authors appreciate the support of the First Affiliated Hospital of Guangdong Pharmaceutical University.