The stainless steel mould pins were fabricated with the dimensions so as to form a capsule body and cap. The moulds were dipped in the coating solution of cellulose acetate containing different pore forming agent for 2 min, and then removed carefully so as to form a thin layer of solution on the mould. The pins were taken out of the coating solution and briefly air dried for 30 s followed by quenching in aqueous solution of glycerol (10% w/v) for 3 min. This resulted in phase inversion and formation of asymmetric membrane. The resulting membrane was stripped off and trimmed to desired size and stored for future study. The resulting capsules were white and opaque in appearance.

The capsule shell of asymmetric membrane containing different types of pore forming agent were filled with a highly water soluble amaranth dye. The dye was filled in each of the capsule body manually and the cap was snugly fitted to the body of capsule and finally sealed with a sealing solution of cellulose acetate only (16% w/v), to ensure that no release takes place form the seal. The capsules containing the dye were placed in the distilled water and solution of sodium chloride (10% w/v) respectively. The capsules were then observed for release of the colored dye in each of the media. The time taken for initial release of the dye from the capsule was recorded and correlated to the concentration and type of pore forming agent present in the shell of each of the capsule. The release of dye from G3 capsule shell, both in distilled water and in solution of sodium chloride (10% w/v) is shown in fig.1a and 1b. The thickness of the wall and the effective surface area of the asymmetric membrane capsule were measured by Mitutoyo digital micrometer. The weight variation of each of the prepared system, after snugly fitting the cap and body of each of the system was determined using Fischer brand digital balance. The porosity and structure of asymmetric membrane was characterized by scanning electron microscopy (SEM, Lyca electron optics - 340)

Tensile strength of each of the prepared asymmetric membrane was determined. The instrument used was designed as described by Agarwal et al [10]. A small strip of the membrane of the capsule of the area 2 cm2 was cut on a glass plate with a sharp blade so it had a smooth margin. One end of the membrane was fixed between adhesive tapes to give support to the membrane when placed in the film holder. Another end of the membrane was fixed between the adhesive tapes with a small pin sandwiched between them to keep the strip straight while stretching. A small hole was made in the adhesive tape near the pin in which hook was inserted. A thread was tied to this hook, passed over the pulley and a small pan attached at other end to hold the weights. A small pointer was attached to the thread, which traveled over the graph paper affixed on the wooden plate. To determine the tensile strength weights were gradually added to the pan to increase the pulley force till the membrane was broken. The weight required to break the membrane was noted as the break force. Tensile strength was determined by using the following formula [11], (Tensile strength= Break force/a×b)(1+ΔL/L), where a, b and L are width, thickness and length of the test membrane, respectively and ΔL is the elongation. 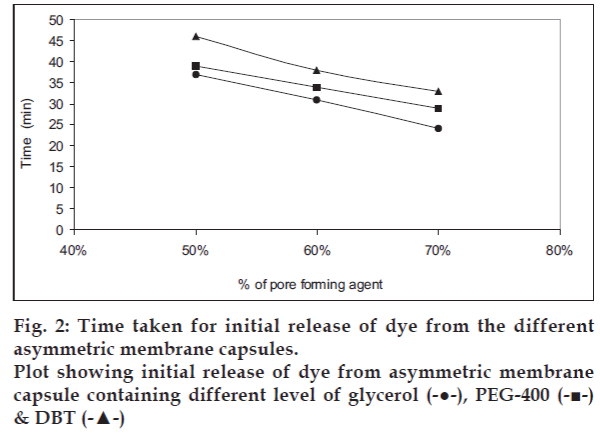 Dye-test also revealed that all the prepared systems followed osmotic release. All the asymmetric membrane capsules released dye after a lag time when suspended in distilled water, but none of the system showed the release of the dye when suspended in sodium chloride solution (10% w/v) as shown in fig.1b. This may be attributed to the fact that the osmotic release from the system was inactivated by the higher osmotic pressure of the surrounding medium i.e.10% w/v sodium chloride solution, which did not allowed the system to osmotically release the dye. Thus the system was shown to follow the osmotic release.

SEM showed these films to be asymmetric in nature. The porosity of cellulose acetate was shown to increase with the increase in the concentration of the pore forming agent. But the porosity was found to significantly alter with the type of pore agent used as shown in fig. 3c. The porosity of cellulose acetate films containing glycerol were found to be higher followed by PEG-400 and DBT. The size of the pores of asymmetric membrane also increased in the following order; glycerol>PEG-400>DBT. 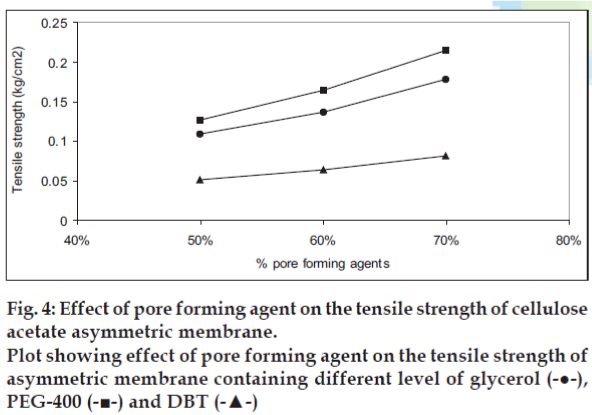 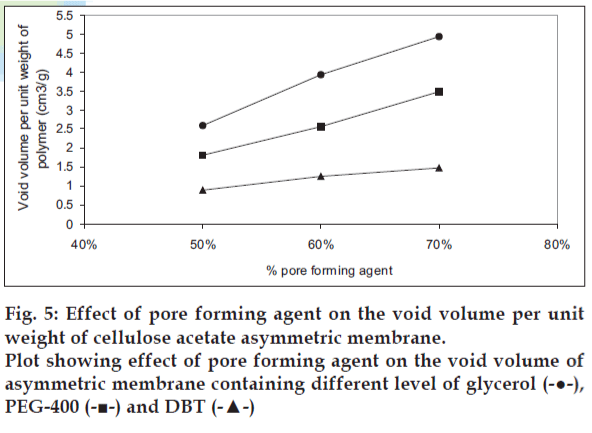 The prepared system can be extended to controlled osmotic delivery of pharmaceutical agents as the dye test suggests osmotic release and in situ pore formation. By the proper choice of pore forming agent the lag time for initial release of drug can be controlled. The porosity and void volume per unit weight of the asymmetric membrane depends on the type and concentration of pore forming agent incorporated; the desired porosity can be achieved to suit the osmotic delivery of a particular drug i.e. higher porosity may be desired for a poorly water soluble drug and vise versa.