Furosemide-loaded alginate microspheres were prepared by the ionic cross-linking technique using CaCl 2 , Al 2 (SO 4 ) 3 and BaCl 2 . The process induced the formation of microspheres with the incorporation efficiency of 65% to 93%. The effect of sodium alginate concentration, cross-linking agents and drying conditions was evaluated with respect to entrapment efficiency, particle size, surface characteristics and in vitro release behaviors. Infrared spectroscopic study confirmed the absence of any drug-polymer interaction. Differential scanning calorimetric analysis revealed that the drug was molecularly dispersed in the alginate microspheres matrices showing rough surface, which was confirmed by scanning electron microscopy study. The mean particle size and entrapment efficiency were found to be varied by changing various formulation parameters. The in vitro release profile could be altered significantly by changing various formulation parameters to give a sustained release of drug from the microspheres. The kinetic modeling of the release data indicate that furosemide release from the alginate microspheres follow anomalous transport mechanism after an initial lag period when the drug release mechanism was found to be fickian diffusion controlled.

Alginates, which are naturally occurring substances, found in brown algae have received much attention as a vehicle for controlled drug delivery [1-4]. Alginates can be considered as block polymers, which mainly consist of mannuronic acid (M), guluronic acid (G) and mannuronic-guluronic (MG) blocks. Dropwise addition of aqueous alginate solution to the aqueous solution containing calcium ions and/or other di and polyvalent cations cause spherical gel formation termed as alginate bead. Alginate is known to be nontoxic when taken orally and also have a protective effect on the mucous membranes of the upper gastrointestinal tract [1]. The dried alginate beads have the property of reswelling and thus they can act as controlled release system. Their reswelling property is susceptible to pH, which protects the acid-sensitive drug from gastric juice [5].

Furosemide, a potent loop diuretic, is used in the treatment of edema of hepatic, cardiac, pulmonary and renal failures and in chronic hypertension [6]. The dose related adverse effects have been observed [6] and the treatment with conventional tablets produce short period of maximum diuresis, which is inconvenient to the patients. But the treatment with sustained release tablets produces same diuretic effect as produced by conventional tablets eliminating the brief and intense diuresis, which is well tolarated to the patients [7]. However, such single unit sustained release tablets could be disastrous if they fail to release the drug at the desired rate and in the desired amount, or if they release the entire amount of drug so as to cause dose dumping. The multiunit microparticulate oral drug delivery systems can be distributed widely throughout the gastrointestinal tract providing a possibility of achieving a longer lasting and reliable release of drug at desired rate. Unwanted intestinal retention of the polymeric material and local irritation which may occur with non-disintegrating polymeric matrix tablets, can also be avoided [8].

As previously reported, the furosemide microspheres prepared by emulsion-solvent evaporation method utilize larger volume of organic solvents [9], which are costly and hazardous because of the possibility of explosion, toxicity and air pollution. The water-based ionic cross-linking technique can provide characteristic advantages over conventional microspheres preparation methods. As previously reported, this technique can be used successfully to prepare alginate microspheres containing acetaminophen [10] and nimesulide [11]. In the present study, the same procedure was applied to prepare furosemide-loaded alginate microspheres. The effects of factors, such as sodium alginate concentrations, cross-linking agents, drying conditions, on morphology of and drug release from microspheres were studied. Drug-polymer interactions in the solid state were studied by infrared spectrophotometry (IR) and differential scanning calorimetric analysis (DSC) and the surface characteristics were evaluated by scanning electron microscopy (SEM).

Thirty milligrams of drug-loaded alginate microspheres from each batch was placed in 100 ml conical ß ask containing 50 ml of phosphate buffer of pH 7.4. The microspheres were magnetically stirred to promote swelling and break up of the cross-linked structure. This afforded liberation and subsequent dissolution of furosemide. The solution was filtered through a 0.45 μm membrane filter. Then the drug was quantified at 276.5 nm spectrophotometrically after appropriate dilution with phosphate buffer of pH 7.4. The incorporation efficiency was determined by the following empirical relationship: Drug incorporation efficiency (%) = (AQ/TQ) × 100, where AQ is the actual quantity of drug present in the microspheres and TQ is the 100% theoretical quantity of drug present in the microspheres (i.e., actual initial loading dose).

The DSC thermograms were recorded on a Universal V 2.5 H differential scanning calorimeter. The DSC studies on the samples were performed by heating samples at a heating rate of 10°/min over a temperature range of 50-300° in closed aluminium pans. The samples included pure furosemide and furosemide-loaded alginate microspheres.

The dissolution studies were performed in a fully calibrated six station dissolution test apparatus (37 ± 0.5°, 50 rpm) using the USP rotating basket method in phosphate buffer media (pH 7.4, 500 ml). A quantity of alginate beads equivalent to 100 mg furosemide for each formulation was employed in all dissolution studies. The samples of 5 ml each were withdrawn at predetermined time interval and were replenished immediately with the same volume of fresh prewarmed phosphate buffer maintaining sink condition throughout the experiment. The aliquots, following suitable dilution, were analyzed spectrophotometrically at 276.5 nm. The concentrations of furosemide in the test samples were calculated using a regression equation (Absorbance = 0.007 + 0.0709 × concentration, R2 = 0.999) of the calibration curve in phosphate buffer of pH 7.4 and corrected for sampling effect using the formula reported by Hayton and Chen [13].

In order to investigate the release mechanism, the release data (≤60%) were fitted to the following power law expression [14]: Mt/M∝ = Ktn….(1), where Mt and M∝ are the amounts of drug released at time t and the overall amount released, respectively, K is the release rate constant and n is the release exponent indicative of release mechanism. The release data were further analyzed using the modified form of the power law expression [15] to accommodate the lag time (tL) in the beginning of the drug release from the alginate beads: Mt/M∝ = K(t − tL)n ….(2). Fitness of the data into various kinetic models was assessed by determining the correlation coefficient. The value of n was calculated from the slope of the plot of log (Mt/M∝) vs. log (t) and log (Mt/M∝) vs. log (t-tL) for interpretation of release mechanism [16] (Table 3). 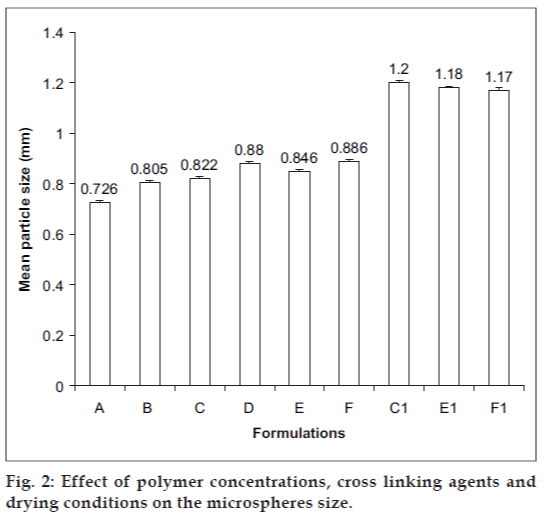 To study the effect of sodium alginate concentration on furosemide release, the sodium alginate was used at four different concentrations: 2.5 (A), 3.0 (B), 3.5 (C) and 4.0 (D) % w/v. The release profiles for these formulations are shown in fig. 3. The results indicated the more sustained effect with increase in the concentration of sodium alginate. It is observed from the fig. 3 that the steady state release was achieved after an initial lag time and it was directly proportional to the concentration of sodium alginate. This type of release behavior agreed with the pulsatile release pattern. The pulsatile or pulsed drug release is defined as the rapid release of certain amount of drug within a short time period immediately after a lag time [18]. The pulsed release pattern could be controlled by the alginate gel disintegration in phosphate buffer. The alginate disintegration was monitored by the exchange of Ca2+ with Na+ in the dissolution medium. The first phase (negligible release portion of the release graph, lag time) might be for the negligible dissociation of alginate beads in phosphate buffer and the drug release mainly based on drug diffusion through the small pores and cracks. The second phase exhibited a burst-like release pattern, which was accompanied by alginate disintegration. The sodium alginate concentration in the formulation greatly influenced the steady state release of furosemide from the alginate beads. The principle of gelation or cross-linking of sodium alginate with calcium chloride is based on the formation of tight junction between the guluronic acid residues [4]. The number of the apparent cross-linking points formed within the calcium alginate gel beads increased with increasing alginate concentration in the formulation. This increase in the apparent cross-linking density delayed the alginate gel disintegration in phosphate buffer due to the retardation of Ca2+ exchange with Na+ and eventually increasing lag time. Increased alginate gel density per unit volume was also thought to affect the decreased pore size within the gels, and thus furosemide release becomes slow. 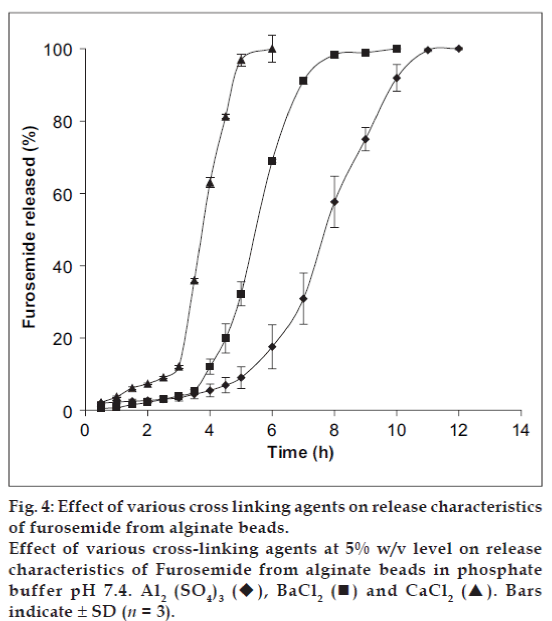 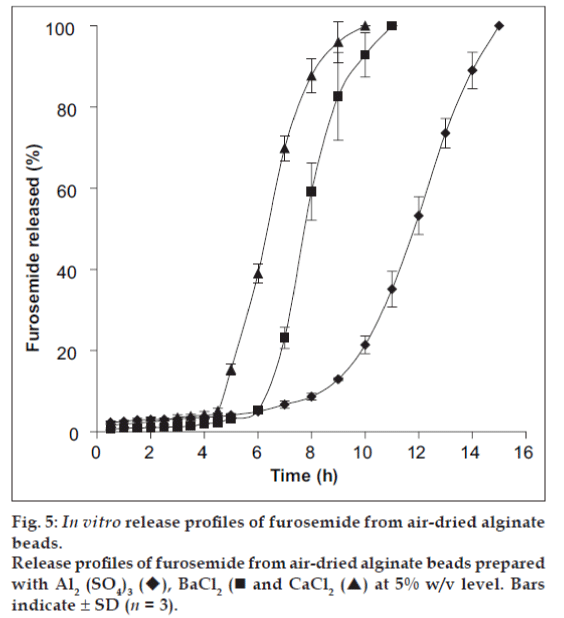 The in vitro dissolution data were analyzed by different kinetic models in order to find out the n value, which describe the drug release mechanism. The values of n and the coefficient of correlation (R2) obtained for the respective model are listed in the Table 3. The best fit with the highest correlation coefficient was shown in modified power law expression (Eqn. 2). The values of n for the release of furosemide from the alginate microspheres range between 0.8360 to 1.383 (from Eqn. 2), indicating that the drug release from the microspheres followed the anomalous transport and super case-II transport mechanism controlled by swelling and relaxation of the polymer chains. For the formulation E, C1, E1 and F1, the n values from power law expression (Eqn. 1) range between 0.20 to 0.54, indicating the mechanism of the initial drug release to be diffusion controlled during the lag period, when alginate dissociation was almost negligible in the dissolution medium. The DSC thermograms of pure drug and drugloaded alginate microspheres prepared with different cross-linking agents are shown in fig. 7. Furosemide exhibited a sharp endothermic peak at 220.8°C corresponding to its melting point. The peak of the drug did not appear in the thermogram of any type of the prepared microspheres containing the drug. It may indicate that the drug was uniformly dispersed at the molecular level in the microspheres as observed by SEM analysis (fig. 1). It can be concluded from the above investigation that the proper selection of formulation conditions are very important to achieve high encapsulation efficiency and to control the release of furosemide from alginate microspheres. The pulsatile release pattern was observed from all the formulations investigated. The alginate microspheres swelled and eventually disintegrated in phosphate buffer of pH 7.4. Consequently, 100% of furosemide was released in the dissolution medium. Therefore, more formulation studies are needed to design the best controlled release formulation.

The authors are grateful to All India Council of Technical Education, New Delhi, for granting scholarship and contingency to P. C. Senapati in relation to this study.