Spinal cord injury caused by occlusion of the thoraco-abdominal aorta remains an unpredictable and devastating complication of aortic surgery for the resection of thoraco-abdominal aneurysms[1]. Individuals paralyzed by trauma to the spinal cord are left with one of the most physically disabling and psychologically devastating conditions known to humans. Most of the injured patients are under 30 y old and the cost of operation and treatment is high, which brings serious economic burden to family and society[2,3]. Spinal cord ischemia reperfusion injury (SCIR) is a devastating complication of thoracoabdominal aortic surgery[4,5] and can be occasionally seen after surgical or endovascular treatment of spinal vascular lesions. In the central nervous system, any serious decrease in the blood flow causes energy failure and triggers a cascade of events leading to oxidative stress and apoptotic damage through amplification of many pathways set in motion by ischemia[6].

Ginseng regarded as the king of Chinese herbal medicine, has been used in clinical practice of traditional Chinese medicine for more than 2000 y[7]. Ginsenoside Rg2 is a main active component of ginseng, which has significant therapeutic effect in many diseases[8]. Previous studies have shown that ginsenoside Rg2 can significantly inhibit oxidative stress and apoptosis[9], but its effect on SCIR injury has not been fully elucidated so far. In this study, in vivo ischemia/reperfusion (I/R) injury model of spinal cord was established in rats. The role of ginsenoside Rg2 in I/R-induced oxidative stress and apoptosis was also explored to provide a scientific basis for the treatment and utilization of ginsenoside Rg2 in SCIR injury.

Rg2 (purity >95 %) was a product from Jiangsu Yongjian Pharmaceutical Technology Co (Jiangsu, China). It was dissolved in dimethyl sulfoxide to obtain stock solution for further investigation. A total of 24 male Sprague Dawley (SD) rats were randomly divided into 3 groups, the normal group, the I/R group and the I/R+ginsenoside Rg2 group. The control group received sham operation. In the I/R group, 30 min after spinal cord injury, blood perfusion was restored.

In the I/R+ginsenoside Rg2 group, ginsenoside Rg2 pretreatment was given 2 weeks before I/R operation, and 10 mg/kg of ginsenoside Rg2 was fed every day. Total protein of spinal cord tissue was extracted and lysed in lysis buffer (Sigma, USA). Sample containing 30 μg protein was exposed to 12 % SDS-PAGE gels and transferred to nitrocellulose membranes. Primary antibody of Bax and bcl-2 was used in experiment and glyceraldehyde-3-phosphate dehydrogenase was used as a loading control. To evaluate oxidative stress level after I/R injury, blood from the 3 groups was assayed for the reactive oxygen species (ROS) and malondialdehyde (MDA) using methods that have been described previously[10]. Histopathologic evaluations were performed by a pathologist blinded to the study[11]. Histopathologic sections were evaluated both qualitatively and quantitatively in order to maximize scientific accuracy. Histologic damage was scored qualitatively, using a previously defined system to explain the pathological mechanism underlying the SCIR injury. All data were expressed as mean±SD. One-way Analysis of variance (ANOVA, followed by the Bonferroni test was used for multiple comparisons using GraphPad Prism 6.0 and p<0.05 was considered statistically significant.

As some injuries to the spinal cord cause the osteoligamentous spinal column to fail under a variety of loading conditions, including flexion, extension, axial load, rotation and distraction. These forces impart the primary mechanical insult to the spinal cord, which in its mildest form causes a cord concussion with brief transient neurologic defects and in its most severe form causes complete and permanent paralysis. Whereas the former represents local axonal depolarization and transient dysfunction, the latter represents a primary axonal and neuronal injury followed by a spreading of secondary tissue damage that expands from the injury epicenter, the schematic and detailed explanation of which is shown in figure 1. The primary and secondary damage after spinal cord injury have played an important role in the mechanism of injury. 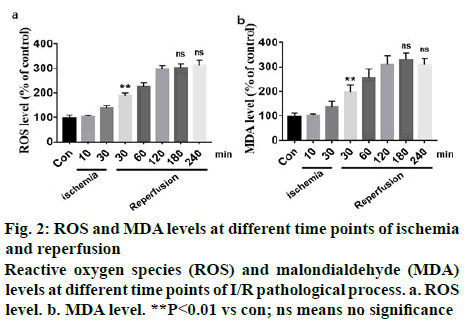 RU is the unit of blood reperfusion, Baseline is the value before ischemia, I is ischemia and R is reperfusion, compare to baseline value:*p<0.05, **p<0.01, Dp>0.05

Figure 3 shows the histopathologic changes in the anterior horn of lumbar spinal cord segments procured hours after reperfusion. The features representing neuronal injury that included eosinophilic cytoplasm, vacuolization and pyknotic appearance of nuclear structure. Cells that contained Nissl substance in the cytoplasm, loose chromatin and prominent nucleoli were considered viable. The viability index was calculated as the number of clearly viable neurons divided by the total neuronal count within the anterior horn of each section for each animal. Analysis of the tissue presented in figure 3 is as follows, red arrows suggested inflammatory cell accumulation, destruction and vacuolization of the gray matter, pyknosis of neurons and capillary proliferation. To investigate the role of Rg2 in SCIR oxidative stress and apoptosis in vivo, western blot analysis was performed. It was observed that 2 h reperfusion after ischemia could significantly induce ROS, MDA level and the apoptotic protein Bax/Bcl- 2 ratio, while could be significantly inhibited by Rg2 (figure 4). The secondary injury that followed primary spinal cord injury during SCIR is an important factor that caused nerve cell injury[12]. After some factors leading to spinal cord ischemia were removed blood supply to spinal cord was restored, but the nerve function instead of getting improved was further aggravated, which led to delayed irreversible death of spinal cord neurons[13]. In addition, prolonged observations indicated that the local SCBP changes correlated well with pathological findings. Ischemic ultra-structural changes of spinal cord anterior horn cells after reperfusion were further aggravated and with prolonged reperfusion, spinal cord ventral horn cells also developed high degree of swelling, ambiguous nuclear envelope structure, intracytoplasmic vacuoles and increased cohesion of mitochondria, while under ischemia and subsequent hypoxia myelinated nerve fibers demonstrated dissolution and capillary endothelium thickened. Micro-villi type hairs appeared projecting in to endovascular structures resulting in endothelial injury as a consequence to the SCIR, which caused dual damage with increasing importance to the pathological basis of primary injury.

The SCIR model used in this study was first reported by Lang-Lazdunski et al.[14]. According to that report, the SCIR injury model in rats was developed, in which blood perfusion was observed at different time points during the pathogenesis of I/R injury, as well as the levels of ROS and MDA were determined at different time points. It was found that after 30 min ischemia, the local blood flow of lumbar spinal cord rapidly dropped to 77.48 % of the basal blood flow. Upon reperfusion initially local blood flow increased rapidly well above the basal level, but continued to remain below the basal level with prolonged reperfusion. However, it returned to basal level of local blood perfusion after reperfusion for 1 h. Three hour reperfusion resulted in new basal blood flow level of 207.13 ±38.25 RU, which was actually lower than the basal level. Moreover, the level of oxidative stress increased in a time-dependent manner after I/R injury and peaked at 120 min.

Ginsenoside, the main bioactive component of ginseng, has been successfully isolated and more than 50 ginsenoside monomers were identified, including ginsenoside Rb1, Rb2, Rg2, RC and Re[8]. Like other ginsenoside monomers, Rg2 appear to possess a wide range of biological functions, such as antioxidant, antiinflammatory, antitumor and immunoregulatory[15]. In this study, it was found that ginsenoside Rg2 significantly inhibited oxidative stress and apoptosis induced by SCIR injury. In conclusion, the present study explored blood flow and oxidative stress levels at different time periods after I/R. The study also found that ginsenoside Rg2 could significantly reduce the level of I/R-induced oxidative stress and apoptosis. These results provide new insights for the use of ginseng in the treatment of SCIR injury.

Authors do not have any conflicts of interest.