Tamsulosin Hydrochloride (TSH) is a third-generation selective postsynaptic alpha (α)1A-adrenergic receptor antagonist, which has a greater affinity for α1A-receptors than for α1B-receptors[1]. It was widely applied for the treatment of benign prostatic hyperplasia by relaxing smooth muscle in the prostate and bladder neck, thereby enhancing bladder emptying[2]. Sustained-release capsules are one of the main dosage forms of TSH. The TSH sustained-release capsules possessed coreshell structure based pellets, with TSH in the middle, a dense enteric coating and high-density microcrystalline cellulose as the out layer and inner core, respectively as shown in fig. 1.

Most reports applied High Performance Liquid Chromatography (HPLC)[3,4], or Liquid Chromatography- Mass Spectrometry (LC-MS) methods[5,6], to determine and identify the related substances in TSH bulk drugs[7,8] and tablets[9-12]. Present study aimed to study the extraction of TSH and its related substances in TSH sustainedrelease capsules. An LC-MS/MS method based on the extraction was applied to identify the main possible related substances in TSH sustained-release capsules and an appropriate HPLC method specific enough to avoid the interfering of high level excipients in the analysis was also studied and validated. The established method could be used to evaluate the quality of TSH sustainedrelease capsule and provide fundamental information for the analysis of similar preparations with dense core-shell structure pellets.

Extraction of TSH and its related substances:

Sustained-release capsules containing 1.0 mg of TSH was weighed accurately and transferred into a 50 ml glass tube, 20 ml NaOH solution (0.02 mol/l) was accurately added and then heated at 50° for 10 min to break down the coating of pellets. The mixture was then sonicated for 10 min to extract TSH and 10.0 ml of acetonitrile was added to precipitate the excipients dissolved. Then 5.0 ml of HCl solution (0.2 mol/l) was added drop wisely to neutralize NaOH. The mixture was then diluted with 15.0 ml of 30 % acetonitrile and centrifuged at 10 000 rpm for 15 min. The supernatant was collected for HPLC analysis, with the final concentration of TSH at 200 μg/ml.

HPLC system for the analysis of related substances in TSH capsules:

The separation was achieved on a Phenomenex C18 column (4.6×250 mm, 5.0 μm) by gradient elution with a mobile phase consisting of ammonium acetate solution (15 mM) and acetonitrile-methanol (50:50, v/v) at a flow rate of 1.0 ml/min. The gradient elution program is shown in Table 1. Column oven temperature was set at 30°. The injection volume was 20 μl and the analytes were monitored at 225 nm.

LC-MS and LC-MS/MS systems for the identification of related substances:

For both LC-MS and LC-MS/MS determination, positive ESI mode was applied and the spray voltage was 4.5 kV, heated capillary temperature was 350° and the pressures of the nitrogen sheath and auxiliary gas were set at 310 kPa and 69 kPa, respectively. The massto- charge ratio (m/z) scanning range was 120-1000 for MS and 50-800 for MS/MS determination. The argon gas of 0.2 Pa was employed for collision-induced dissociation in MS/MS mode.

HCl, HCl-Methyl alcohol (MeOH) solution, Ammonium acetate (NH4Ac) buffer (pH 6.5) and NaOH-MeOH solution were studied. As shown in Table 2, both HCl and NaOH hydrolysis can extract more than 90 % of TSH while NH4Ac buffer (pH 6.5) has the lowest extraction efficiency.

As the labelled content of TSH sustained-release capsule is 0.2 mg and the amount of excipient is 800 times to TSH. The extraction solution contained high concentration of excipients and their degradation products in addition to TSH and related substances. The addition of acetonitrile to the NaOH extraction could precipitate most of the excipients and reduce the interference of excipients.

To estimate the main degradation impurities in TSH products, the capsules were treated with stressed conditions. As shown in fig. 2, the retention time of TSH was 23.4 min and its main related substances at 11.3 to 29.0 min. Although the excipients showed several peaks at 7.7, 9.4, 15.6 and 26.0 min, these peaks could be well separated (resolution, R>1.5) with TSH and its related substances. Significant degradations of TSH were observed with stress conditions of oxidation and photolysis, while degradation in acidic, alkaline and thermal treatments was limited. According to Table 3, the five degradation products with the content of about 0.1 % or more, named as Retinoschisin (RS) 1 to RS5, were further identified with LC-MS and LC-MS/MS.

Five main related substances, RS1 to RS5, were characterized with TOF-MS for the information of molecular weight and triple quadrupole mass spectrometer for their product mass spectra to elucidate their structures. TSH was also studied in comparison. The chromatographic and mass spectrometric data were summarized in Table 3 and the fragmentation patterns of the protonated molecular ions [M+H]+ are proposed in fig. 3. 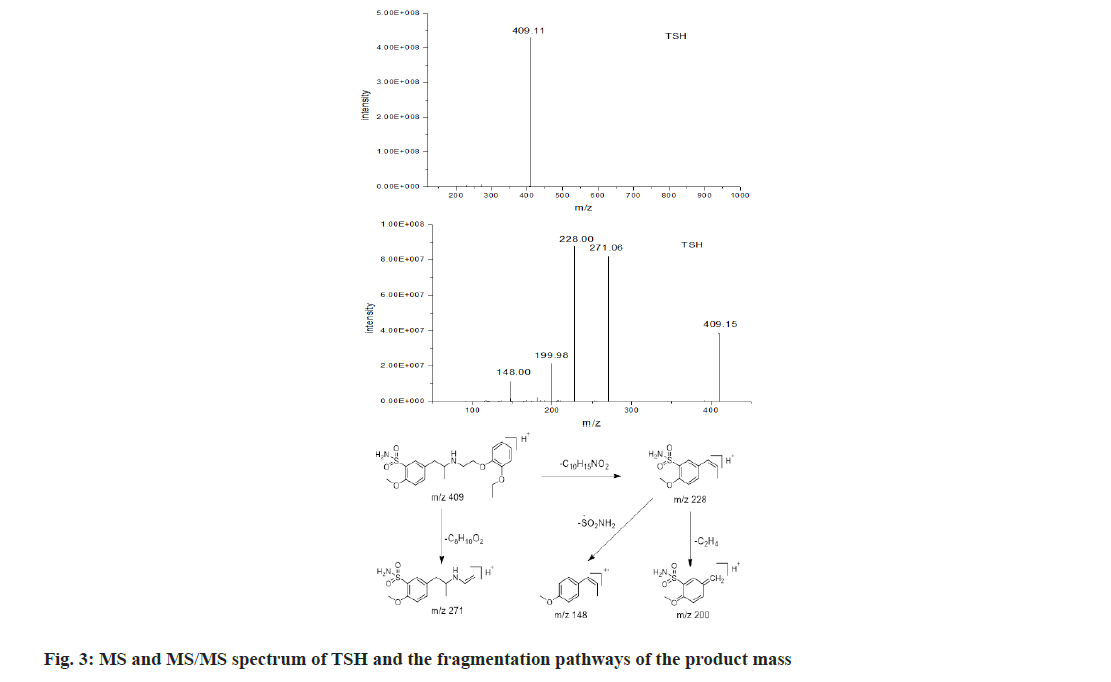 Fig. 3: MS and MS/MS spectrum of TSH and the fragmentation pathways of the product mass Fig. 4: MS and MS/MS spectrum of RS1 and the fragmentation pathways of the product mass

As shown in fig. 5, the m/z of RS2 was 181.89, corresponding to ion formula of [C10H16NO2]+, which was 227 Da lower than the protonated molecule ion of tamsulosin [C20H29N2O5S]+. RS2 was observed to have a characteristic fragment [M+H-NH3]+ at m/z 165, which suggests a free amino occur in the structure. Because amino in sulfonamide is stable and the linkage of S-N is difficult to cleave, it can be concluded that RS2 was produced by the breakage of C-N from tamsulosin. Other product mass spectrum of RS2 contained ions at m/z 137, 121 and 111 due to the neutral losses of C2H4 (28) form daughter ion at m/z 165, C2H6ON (60) from parent ion [M+H]+ and Acetylene (C2H2) (26) from ion at m/z 137, respectively. The formation of m/z 111 was indicative of the presence of 1,2-dihydroxyl phenyl group. Thus, RS2 was identified as the degradation by the breakage of C-N of tamsulosin with oxidation and photolysis conditions. Fig. 5: MS and MS/MS spectrum of RS2 and the fragmentation pathways of the product mass

As shown in fig. 6, the ESI-MS spectrum of RS3 revealed a set of correlated adduct ions at m/z 380.85,402.83 and 418.85. Judging from their mass differences, it can be concluded that they were the [M+H]+, [M+Na]+ and [M+K]+ adduct ions of the analyte, respectively. Thus, the corresponding protonated molecule ion formula should be [C18H25N2O5S]+, which was 28 Da lower than that of tamsulosin [C20H29N2O5S]+. RS3 was observed to have the same fragment ions of m/z 271, 228 and 148 as tamsulosin, which suggests RS3 is similar to tamsulosin structure. It was supposed that RS3 was formed by the cleavage of C-O bond of tamsulosin in oxidation. Fig. 6: MS and MS/MS spectrum of RS3 and the fragmentation pathways of the product mass

As shown in fig. 7, the [M+H]+ ions of RS4 was m/z 395.07, 14 Da lower than TSH and corresponding to loss of Methylene (CH2) in comparison with TSH ([C19H27N2O5S]+). Its fragment ions had similar pattern as that of TSH. These proved that RS4 possessed methoxyl instead of ethoxyl group. Chromatographic study showed that the retention time of RS4 was same as impurity D, 2-methoxyl substituted TSH. This further proved RS4 was the impurity D of TSH. Fig. 7: MS and MS/MS spectrum of RS4 and the fragmentation pathways of the product mass

As shown in fig. 8, the [M+H]+ ions of RS5 was m/z 330.12, corresponding to its ion formula of [C20H28NO3]+. Its fragment ion of m/z 192 resulted from breakage of C-O linkage, and m/z 149 was formed from the cleavage of C-N linkage from m/z 192 ion. In the terms of degradation pathway, RS5 was differentiated from TSH by losing molecular weight of sulfonamide group (M-79). Chromatographic study also proved that the retention time of RS5 was same as impurity H, desulfonamide TSH. These showed that RS5 was the impurity H of TSH. Fig. 8: MS and MS/MS spectrum of RS5 and the fragmentation pathways of the product mass

As the reference materials of RS4 and RS5 were available, these 2 impurities were validated with respect to specificity, Limit of Detection (LOD), Limit of Quantification (LOQ), precision (inter-day and intraday), accuracy, stability and robustness as International Council on Harmonisation (ICH) guidelines.

Intra-day precision was evaluated by injecting 6 times of simulated sample solution and impurity reference solutions. The Relative Standard Deviations (RSDs) of all the determinations were calculated and found below 1.80 % (n=6). Inter-day precision was studied with different analysts and different instruments at different days. The RSDs of RS4 and RS5 were 1.14 % and 2.18 % respectively (n=12). These proved that the precision of the method was good.

Table 4: Recovery of RS4 and RS5 in Simulated Samples

Table 5: Stability of RS4 and RS5 in Simulated Samples

The robustness of the method was studied by altering flow rate (±0.2 ml), pH of the buffer (±0.5 units), column temperature (±5°), detection wavelength (±5 nm) and initial proportion in mobile phase. The result was tabulated in Table 6. Changes of wavelength and pH induced errors in the results of RS5, but other changes didn’t influence in determination of RS4 and RS5. This demonstrated the pH and wavelength of the method should be strictly controlled to ensure the results.

Table 6: Robustness of RS4 And RS5 in Simulated Sample Solution 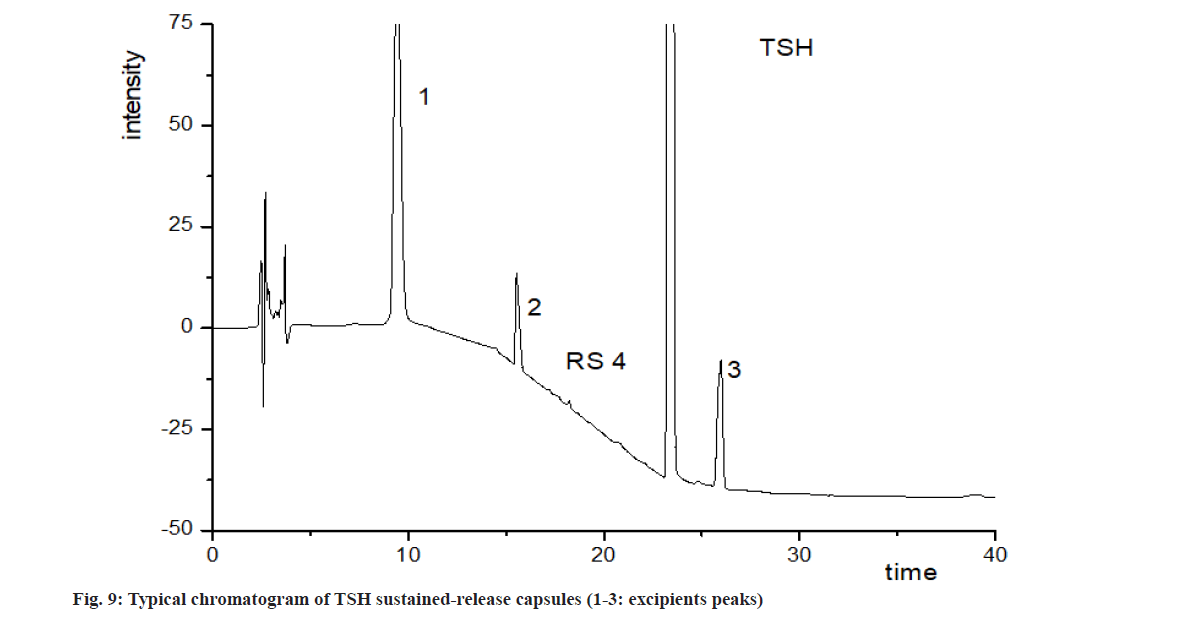 Jian Li and Li Deng have contributed equally to this work.

This work was financially supported by the Fundamental Research Funds for the Central Universities (No. 2632017ZD07).