A. Praveena*, S. Arthi and B. Sudarmathi

In the present study, the anticancer activity of Morinda tinctoria fruit extract was evaluated in vitro and in silico. The ethanol extract of the fruit was prepared and subjected to preliminary screening and gas chromatography-mass spectrometry analysis to identify phytochemical constituents. Free radical scavenging activity of Morinda tinctoria fruit extract was evaluated using 2,2’-azinibis(3- ethylbenzothiazoline-6-sulfonic acid and 3-(4,5-dimethylthiazol-2-yl)-2,5-diphenyltetrazolium bromide assay. Morinda tinctoria fruit extract at 125 µg/ml concentration inhibited the growth of MDA-MB cell lines. The drug likenesses property of compounds present in the ethanol extract was analysed based on Lipinski’s rule of five. The breast cancer protein ErBb2 was chosen as target for studying the molecular interaction with selected ligands. Corynan-17-ol,18,19-didehydro-10-methoxy was selected as an efficient lead molecule against target-based on the lowest binding energy value of –5.9 Kcal/mol. This showed that the fruit of Morinda tinctoria could be explored to identify promising lead molecules against breast cancer.

Cancer is the second leading reason of mortality globally, and is accountable for an estimated 9.6 million deaths in 2018 as per World Health Organization report. Breast cancer is now the most common cancer in most cities in India, and second most common in the rural areas. The available therapeutic approaches to treating cancer are toxic in nature with numerous side effects. However, several experimental and epidemiological researches suggested that vegetables and fruits are associated with reducing danger of numerous varieties of cancer[1]. Plants contain several natural compounds with important pharmacological properties, and their extracts have been used for treating various diseases from ancient times. The species of Morinda, especially Morinda citrifolia (Noni) has been reported to have a broad range of health benefits for cancer, infection, arthritis, asthma, hypertension and pain[2]. The Noni fruit might enhance the therapeutic effect of anticancer drugs[3]. M. tinctoria Roxb is a perennial herb with numerous medicinal values. The physiochemical properties and in vitro antimicrobial screening of M. tinctoria fruit extracts gave evidence to its medicinal property[4]. In the present study, M. tinctoria fruit was selected, extracted with ethanol and analysed for phytochemicals and antioxidants properties. In silico studies allows identification of biological drug targets to greatly increase the production of potential drugs[5]. Therefore, an attempt was made to identify metabolites from M. tinctoria fruit extract and to analyse them against the breast cancer related protein using in vitro and in silico methods.

The ripened fruit of M. tinctoria was collected from Thiruvallur District, Tamil Nadu, India. The fresh fruit was washed in distilled water and 60 g of fresh fruits without seeds were taken and extracted with 150 ml of ethanol using a Soxhlet apparatus. The fruit extract was preliminarily screened for the presence of phenols, alkaloids, flavonoids, terpenoids, saponins and glycosides using the standard methods[6,7]. Gas chromatography-mass spectrometry (GC-MS) was used to identify and confirm various bioactive compounds present in the crude extract. The GC-MS comprised of an automatic liquid sampler and a gas chromatograph interfaced to mass spectrophotometer. Helium was used as a carrier gas and the injector temperature was kept at 350°.

2,2’-azinobisethylbenzthiazoline-6-sulfonic acid (ABTS) assay was based on the ability of different substances to scavenge ABTS+ radical cations. The assay was performed by following the protocol of Re et al.[8]. ABTS solution (7 mM) was reacted with ammonium per sulphate (2.45 mM) solution to produces a dark colored solution containing ABTS radical cations and the mixture was allowed to stand in dark at room temperature for 12-16 h before use. ABTS+ solution was diluted to an absorbance of 0.7±0.05 with ethanol at 734 nm. The initial absorbance was measured at 734 nm. Samples were diluted to produce 100, 300, 500 μg/ml. The reaction was initiated by the addition of 1.0 ml of diluted ABTS to 10 μl of different concentration of the sample and 10 μl of methanol as control. Butylhydroxytoluene (BHT) was used as a standard. The absorbance was read at 734 nm and the % inhibition was calculated using the Eqn., ABTS scavenging activity (%) = (A0–A1)/A0×100, where, A0 is the absorbance of the control and A1 is the absorbance of the sample.

MDA-MB cell line was obtained from NCCS, Pune. The cells were maintained in minimal essential medium supplemented with 10 % FBS, penicillin (100 U/ml), and streptomycin (100 μg/ml) in a humidified atmosphere of 50 μg/ml CO2 at 37°. Cells (1×105/well) were plated in 24-well plates and incubated in 37° with 5 % CO2 condition[9]. After the cell reaches the confluence, various concentrations of the samples were added and incubated for 24 h. After incubation, the sample was removed from the well and washed with phosphate-buffered saline (pH 7.4) or Dulbecco`s modified Eagle media without serum and 100 μl/well (5 mg/ml) of 0.5 % 3-(4,5-dimethyl- 2-thiazolyl)-2,5-diphenyltetrazolium bromide (MTT) was added and incubated for 4 h. After incubation, 1 ml of dimethyl sulfoxide (DMSO) was added in all the wells. The absorbance was measured using a UV spectrophotometer at 570 nm and 50 % inhibition (IC50) was determined graphically. The percent cell viability was calculated using the following formula, using DMSO as the blank. Measurements were performed and the concentration, percentage of cell viability = A570 of treated cells/A570 of control cells×1003.8.

During in slico analysis, the ErBb2 protein of Homo sapiens was selected as target and the protein sequence was collected from Swissprot database. The 3D structure of the target was modelled using the Modeller software[10]. The modelled 3D structure of target was evaluated using Ramachandran plot by RAMPAGE online tool and visualized using RASMOL software. The compounds identified from GC-MS were retrieved from Pubchem database and the drug likeliness properties were analysed based on Lipinski’s rule of five. The compounds which obeyed Lipinski’s rules were used for molecular docking using AutoDock Vina software[11] to check the interaction with the ErBb2.

Phytochemical constituents have different degrees of solubility in different types of solvents depending on their polarity. The presence of alkaloids, saponins, phenols, flavonoids, terpenoids and absence of glycosides in the M. tinctoria fruit was evidently confirmed by the preliminary phytochemical screening test. The ethanol extract of M. tinctoria fruit showed nine peaks in the chromatogram of the extract (fig. 1). The maximum peak was shown by corynan-17- ol-18,19- didehydro-10-methoxy (RT=21.63), followed by quinoxaline-2-isopropyl-3-phenyl-4 oxide (RT=17.57) and other compounds such as alpha-pinene (RT=10.13), benzoic acid, 2,4-dimethoxy- (8,8-dimethoxy-2-octyl) ester (RT=25.99), 2H-naphtalen-1-on (RT=20.22), 3-cyclohexen-1- ol (RT=12.08), 3,4-dihydroxy-1,6-bis(3-methoxyphenol)- hexa-2,4-diene-1,6-dione (RT=22.88), Z,E- 2-methyl-3,13-octadecadien-1-ol (RT=18.18), 2-allyl-1,4-dimethoxy-3methylbenzene (RT=13.52). Saponins and terpenoids are the important phytochemicals, which have proven anticancer activity[12,13]. The observed antioxidant and anticancer activities in this study could partially be attributed to the presence of tannins, saponins, terpenoids and phenolic compounds.

The free radial scavenging ability of M. tinctoria fruit extract was determined by ABTS assay. Samples were diluted to produce 100, 300, 500 μg/ml and OD were taken. For 100, 300, 500 μg/ml, OD obtained as 0.510, 0.321, 0.194 and ABTS activity shown as 35.11, 59.16 and 75.19 %. The percentage of antioxidant activity was concentration-dependent (fig. 2). Antioxidant has the ability to fight against the cancer[14]. The advantage of ABTS method was that samples reacted rapidly with ABTS in the aqueous buffer solution reaching a steady state within 30 min. ABTS assay measures relative ability of antioxidant to scavenge the ABTS generated in aqueous phase, as compared with BHT standard. The ABTS is generated by reacting a strong oxidizing agent (e.g. potassium permanganate or potassium per sulphate) with the ABTS salt[8]. The reduction of bluegreen ABTS radical coloured solution by hydrogendonating antioxidant is measured by the suppression of its characteristic long wave (734 nm) absorption spectrum. The reduction of ABTS can thus be monitored by measuring the decrease in its absorbance at 734 nm during the reaction[15]. As the concentration of sample increased, the antioxidant activity also increased. The ethanol extract of M. tinctoria fruit exhibited potent antioxidant activity against ABTS at 500 μg/ml concentration. 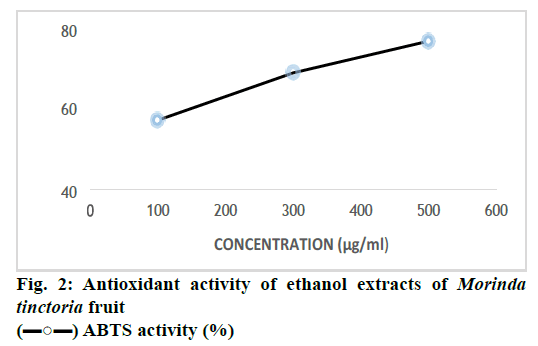 The reduction in cell number reflected cell growth inhibition and drug sensitivity is specified as the concentration of the drug that is required to achieve 50 % growth inhibition as compared to the growth of the untreated control (IC50, fig. 3). Anticancer activity of M. tinctoria fruits has shown the IC50 value 125 μg/ml with MDA-MB cell lines. The most common use of MTT assay is to determine cytotoxicity of several drugs at different concentration. The mitochondrial activity of the cells is reflected by the conversion of the tetrazolium salt MTT into formazan crystals. Viable cells with active metabolism convert MTT into a purple coloured formazan product with an absorbance maximum near 570 nm, when cells die, they lose the ability to convert MTT into formazan, and thus colour formation serves as a useful and convenient marker of only the viable cells[16]. The mechanistic aspect of fruits bioactive compound may prevent cancer through various mode of action including antioxidant activity, inhibition of cell proliferation, induction of apoptosis, initiation of cell invasion and sub cellular signalling pathways[17]. 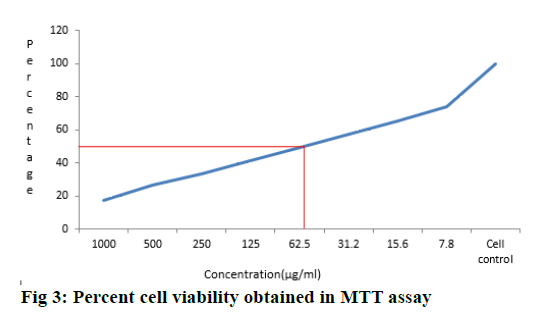 Modeller software was used to model the target structure (ErBb2 receptor). Top five-template structures from PDB database were chosen based on sequence identity with the target sequence by running BLAST. Among this top five-template structure, 5kwg.1.A-Human (tyrosine kinase receptor) has the sequence identity of 99 % and hence it is used as a template to build the 3D structure of ErBb2 receptor. Among the five models generated in Modeller software, the top model was selected based on low DOPE score of -30124.03412. The modelled structure was visualized using RASMOL viewer. The Ramachandran plot showed 98 % of the residues in favoured region indicate that the quality of the modelled structure is good. Using Lipinski drug filter, the compounds obtained from GC-MS analysis of M. tinctoria fruit extract that follow Lipinski rule of five was analysed and used for further studies. Out of 9 compounds from GC-MS analysis, 6 compounds followed the Lipinski’s rule of five such as benzoic acid- 2,4-dimethoxy-(8,8-dimethoxy-2-octyl)ester, corynan- 17-ol,18,19-didehydro-10-methoxy, 2H-naphtalen-1- one, quinoxaline, 3-cyclohexen-1-ol and alpha-pinene.

The affinity level and distance between the receptor and ligand molecule was calculated in 9 different modes using AutoDock Vina molecular docking software to get the best docking pose. The docking has been performed between the ErBb2 receptor and 6 different ligands. The lowest binding energy of –5.9, –5.8 Kcal/mol was shown by corynan-17-ol,18,19-didehydro-10- methoxy and 2H-naphtalen-1-one,3,4-dihydro-6- methoxy-2-(4-methoxy benzylideno), respectively. The corynan-17-ol-18,19-didehydro-10-methoxy satisfies rule of five with lowest binding energy so it could be efficiently used as lead compound against breast cancer (fig. 4). Molecular docking is one of the in silico method which is more effective for finding the active compound in medicinal plants. The structure of the ligand and target should be in three dimensional, for which Modeller software was used to design the 3D structure of ErBb2. Hamsa et al. has done the prediction on molecular interaction of natural compounds against NFkB p50/p65 using molecular docking, which revealed that ginkgetin, bilobetin and mesuaxanthone B exhibited the best binding reactions[18]. The importance of molecular docking has been studied in stigmasterol from Avicennia marina plant against the VP28 envelope protein[19]. In the present study, in silico techniques strongly support and help to identify the novel and potent inhibitors through mechanism of ligand-receptor interaction. From the docking of active compounds, corynan-17- ol-18,19-didehydro-10-methoxy has shown strong interaction with breast cancer protein ErBb2 with the binding energy of -5.9 Kcal/mol.

In conclusion, the result obtained in the study demonstrated that M. tinctoria fruit could be used as good source of antioxidant and anticancer agent. In future research, the work can be further developed and clinical trials can be done to test its effectiveness in the clinic. Thus, the isolation and modification of novel product from M. tinctoria fruit as well as their analogues and subsequent evaluation of their bioactive properties could lead to the discovery of novel promising drug from fruits of M. tinctoria.