Polygonum multiflorum is a traditionally highly efficient plant species that is cultivated in many countries and widely used as a source of Chinese medicine to treat various diseases like liver injury, cancer, diabetes, alopecia, atherosclerosis, neurodegenerative [1], asthma, cerebral ischemia, steatosis, and Alzheimer’s disease [2-5]. Many studies showed that the major bioactive components of P. multiflorum are flavonoids and polyphenols including emodin, resveratrol, and 2,3,5,4'-tetrahydroxylstilbene-2-O-β-D-glucoside [6,7].

In this study, cultured primary splenocytes were used for the in vitro study, and cyclophosphamide-induced immunosuppressed rat was used for in vivo analysis. In order to assess the immunostimulating effects of PME the productions of various immunity-related cytokines such as IL-2, IL-12, TNF-α, IFN-γ in in vitro and in vivo models were investigated.

The whole plant of P. multiflorum was purchased from the Jiri Mountain P. multiflorum Co-operative Association in San Chung, Gyungnam Province, Korea. Dried tuberous root of P. multiflorum (1.0 kg) was extracted with 6.0 l of 70 % ethanol-DDW (v/v) at 80° for 3 h. The extracts were centrifuged at 3 000×g for 20 min at 4° and the supernatant was filtered through Whatman No. 3 filter paper and concentrated using a rotary evaporator. The supernatant extract was lyophilized to produce a sticky powder and then aliquots were kept at –80° until use to experiment. The yield of the ethanol extract of P. multiflorum was approximately 21.6 % of whole plants. The contents of total phenol and total flavonoids of extracts were 3205.11±40.32, 595.23±35.52 μg/g. Moreover, primary marker substance of P. multiflorum, emodin was analysed to 156.37±0.179 μg/g (Figure 1) [16]. Microanalysis for liquid chromatography analysis of emodin contents in PME were measured using Agilent Technologies 1260 Infinity LC system (Agilent, Tokyo, Japan). Analysis was performed at the Mokpo Marine Food- Industry Research Center (Mokpo, Korea). Male Sprague Dawley rats (SD; 6-8 w) purchased from Orient Bio (Sungnam, Korea) were acclimated for 7 d. All animals were housed in a controlled environment (22±3°, 12-h light/dark cycle) during acclimation and the experiment and fed ad libitum with normal diet and water. All experiments approved by the Institutional Animal Care and Use Committee at Wonkwang University (Approval No. WKU16-20).

Splenocytes were obtained from SD rats. Briefly, the spleen was removed aseptically, washed thoroughly, diced and spleen cells were released by trituration. The splenocyte preparation was cleaned up by centrifugation and resuspending the pellet in Hank’s buffered salt solution (HBSS, pH 7.4), and the erythrocytes were lysed. The splenocyte preparation was again centrifuged, and splenocytes were washed two more times with HBSS. Cell count and viability were assessed by trypan blue exclusion prior to plating. Cells were resuspended in RPMI containing 10 % fetal bovine serum. Collected splenocytes were seeded on a 96-well plate with 100 μl of 2×105 cells/well. The final volume per well was 100 μl. Cells were incubated in a CO2 incubator (5 % at 37°) under humidified conditions for 24 h. A WST-1 assay kit (ITSBio, Seoul, Korea) or micro-culture tetrazolium assay (MTT) test [17,18] for splenocyte proliferation rate measurement and the results were determined using a Microplate-Reader (Molecular Devices, Sunnyvale, CA, USA).

Seven male rats per group were treated with saline or P. multiflorum oral administration once a day for 28 d, respectively. In every week, the rats are weighed, and their appearances were judged. After administration of samples, animals anesthetized with diethyl ether and whole blood was collected through the abdominal vena cava. Using the collected whole blood, each element of the blood cells, including neutrophils, eosinophils, basophils, and monocytes/macrophages, was measured with a Hemavet950 (Drew Scientific Group, Dallas, TX, USA).

All data are expressed as the mean±SEM. A one-way analysis of variance (ANOVA) test employed followed by Tukey’s multiple range tests to compare each group. Statistical analyses conducted using SPSS for Windows software (Ver 10.0, Chicago, IL, USA) and data with different superscript letters are significantly different when p value is less than 0.05.

The endogenous cytotoxicity of PME on rat splenocyte was evaluated through MTT assay. The multiple concentrations of PME were used and effective doses were calculated from dose-response results at 24 and 48 h. Results of the endogenous cytotoxicity evaluation against splenocytes of the PME are shown in Figure 2. The PME exhibited no significant activity against the splenocyte at ≤300 μg/ml. On the contrary, the high dose of PME exhibited significant cytotoxic effect against the splenocyte with ≥500 μg/ml at 24 and 48 h later. Therefore, optimal dosage of PME was 300 μg/ml was available for in vitro test with rat splenocytes and adjusted administrative dose for in vivo experiments. 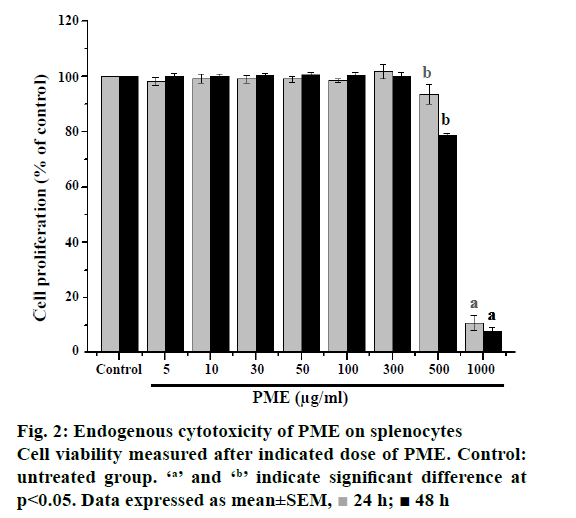 Figure 2: Endogenous cytotoxicity of PME on splenocytes
Cell viability measured after indicated dose of PME. Control: untreated group. ‘a’ and ‘b’ indicate significant difference at p<0.05. Data expressed as mean±SEM,

Splenocytes of normal rats released cytokines when treated with various concentration (Figure 3). Low dose (<50 μg/ml) of PME did not induce release of TNF-α from spelnocytes, whereas IFN-γ, IL-2, IL-12 release was increased compared to untreated group in a dosedependent manner. TNF-α release was increased at a relative high dose (≥50 μg/ml) of PME in a dosedependent manner from splenocytes compared to the untreated group. Figure 3: Immunomodulating effects of PME on cytokine production in spelnocytes
Released (A) TNF-α, (B) IFN-γ, (C) IL-2, and (D) IL-12 were measured from culture supernatants at 48 h. ‘a’ and ‘b’ indicate significant difference at p<0.05. Data expressed as mean±SEM

To evaluate the immunopotentiating effect of PME in vivo, cyclophosphamide-induced immunosuppressed rats were administered with PME and the numbers of peripheral leucocytes were measured (Figure 4). 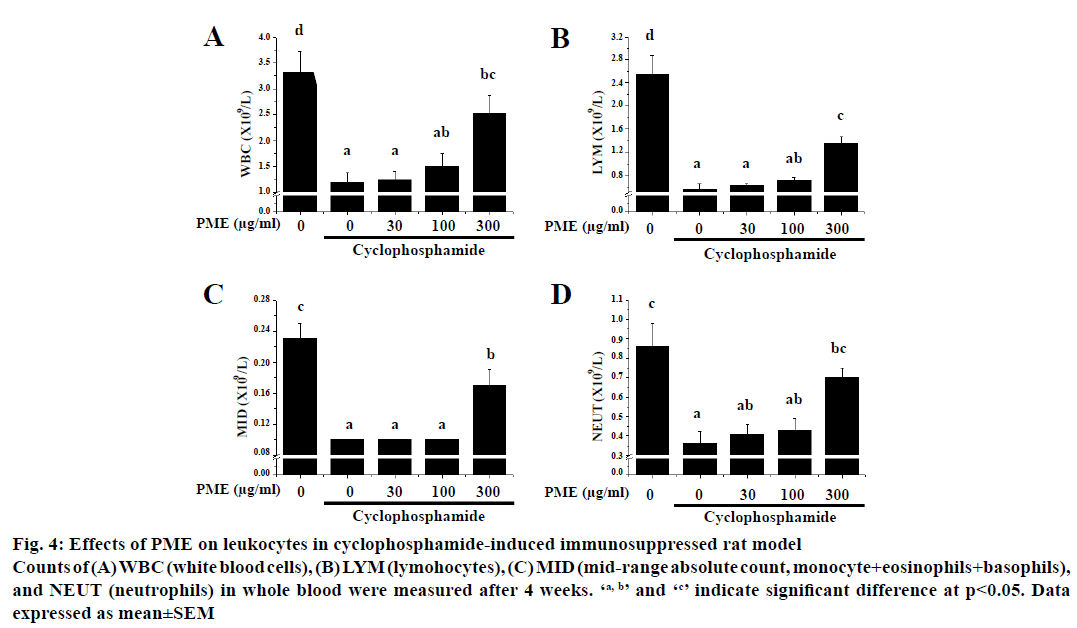 Figure 4: Effects of PME on leukocytes in cyclophosphamide-induced immunosuppressed rat model
Counts of (A) WBC (white blood cells), (B) LYM (lymohocytes), (C) MID (mid-range absolute count, monocyte+eosinophils+basophils), and NEUT (neutrophils) in whole blood were measured after 4 weeks. ‘a, b’ and ‘c’ indicate significant difference at p<0.05. Data expressed as mean±SEM

Effect of PME on the expression of immunomodulating cytokines such as IL-2, IL-12, TNF-α and IFN-γ in cyclophosphamide-treated rats was assessed (Figure 5). As shown, treatment of cyclophosphamide significantly reduced the expression of IL-2, IL-12, TNF- α, and IFN-γ. However, PME treatment in cyclophosphamidetreated rat reversed these cytokines expressions than the normal rat in a dose-dependent manner. Cyclophosphamide-induced immunosuppression resulted in dramatically reduced spleen cellularity, both in white and red pulps compared to normal group (Figure 6). The white pulp became hardly identifiable with sparse areas. Only remnants of follicles and marginal zone indicated the original location of the white pulp. Abnormal aggregated cell populations, uneven distribution of haematopoiesis, were observed in red pulp. Whereas, administration of PME ameliorated the disruption of splenic architecture in cyclophosphamideinduced rat model in a dose-dependent manner (Figure 6C-E). In PME-administrated group red pulp, white pulp, and marginal zone were almost re-established and recovered than control group. 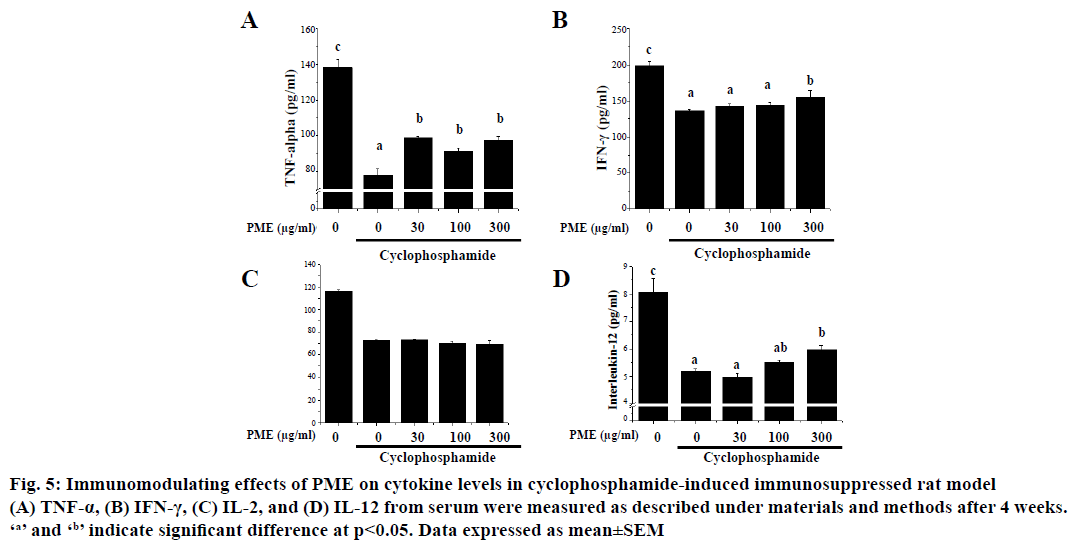 Figure 5: Immunomodulating effects of PME on cytokine levels in cyclophosphamide-induced immunosuppressed rat model
(A) TNF-α, (B) IFN-γ, (C) IL-2, and (D) IL-12 from serum were measured as described under materials and methods after 4 weeks. ‘a’ and ‘b’ indicate significant difference at p<0.05. Data expressed as mean±SEM Cyclophosphamide is generally used for immune suppressed model by typical cytotoxity and increased the apoptotic cells in immune organ and tumor [9,20,21]. In this report, the cyclophosphamideinduced immunosuppression was verified by means of cytokines production both in vitro and in vivo. In other report, cyclophosphamide-induced immune modulation changes T and B lymphocyte subsets and increases cytokines release by Th1/Th2 lymphocytes in mice model [13]. After treatment with PME, rats had better body and organs weight compared to cyclophosphamide-treated group. Therefore, PME can protect spleen and other immune systems against cyclophosphamide-mediated immune impairment. However, cyclophosphamide treatment caused release of many other cytokines and caspases, the intracellular death signal. In some report, cyclophosphamide treatment was reported to induce apoptosisdependent [22], and/or apoptosis-independent [23] tumour regression in vivo and in vitro. However in this report, the focus was mainly on immunomodulation in animal model and positive effects were observed after the administration of PME. Furthermore this property of PME could be extended in other disease models for further studies.

Emodin, a well-known marker of P. multiflorum can also be isolated form many herbs such as Aloe vera, and Cassia obtusifolia [24]. Previous reports summarized various medicinal properties of emodin with antiviral, antibacterial, antiallergic, antiosteoporotic, antidiabetic, immunosuppressive, neuroprotective and hepatoprotective activities [25] with many mechanisms [26,27]. Although, it is possible for PME to have various components including carbohydrates, lipids, proteins, vitamins and minerals, therefore further studies are required. Finally, the data presented here showed that PME treatment could ameliorate immunosuppression and could be used as a therapeutic agent to treat such drug-induced problems.

This work was supported by "Food Functionality Evaluation program" under the Ministry of Agriculture, Food and Rural Affairs and National Research Council of Science & Technology (NST) grant by the Korea government (MSIP; No. CAP-16-07-KIOM) and Korea Food Research Institute. K-H-P is recipient of research supporting grant of Nambu University (2017).