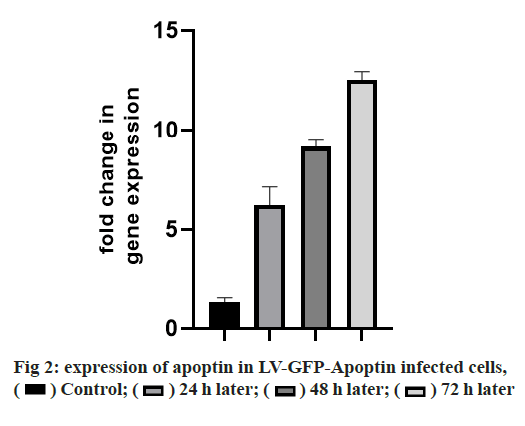 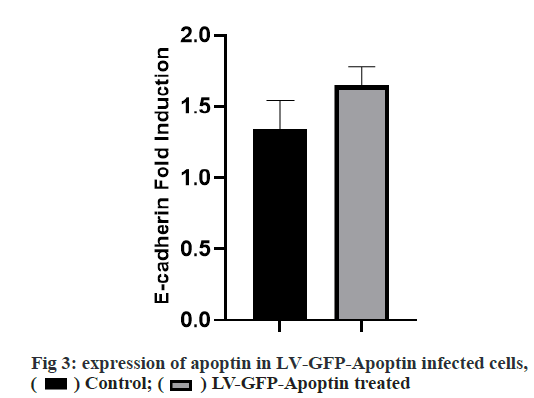 The results of this study showed that LV-GFP-Apoptin has anti-tumor activity in PC-3 cells and the expression of this gene in cancer cells prevents cell proliferation and induces cell death. There are several ways to express protein inside a cell and the use of viral lentivirus vectors is one of the best ways to transfer genes into prostate cancer cells because of the high resistance of these types of cells to other vector [18]. The results of the GFP fluorescence test show a good LV-GFP-Apoptin function in PC-3 cells. We did not find any similar study using the same target gene and cell line. Also the expression of the apoptin gene was measured by RT-PCR, and the results showed that the expression of the apoptin gene in PC-3 cells increased significantly. Previous studies have suggested a cytotoxic effect of the apoptin gene on breast and liver cancers [19]. The inhibitory effect of apoptin gene expression is not due to the viral vector itself and the expression of the GFP gene, and the lentivirus without apoptin has little effect on cell survival rate and metabolic activity [20]. In general, the results of previous research show that viral lenticular vectors are one of the most effective methods for gene transfer, and the apoptin gene is effective in inducing apoptosis in cancer cells [21,22]. Clinical and genetic studies on the pathogenesis mechanisms of apoptin on the PC-3 cell line report that the PI3K/Akt pathway is active in prostate cancer cells [23]. These studies show that the activity of this pathway not only enhances the proliferative potential of prostate cancer; it also has a significant effect on the resistance of chemotherapy drugs or radio resistance [24]. In this study, after the transfer of the apoptin gene by the lentivirus vector, the rate of expression of the E-cadherin gene increased over time. E-cadherin protein interacts with Catenin through its cytoplasmic part with β-catenin and γ-catenin family proteins, and in this way, it is associated with cellular skeleton function [25]. In addition to participating in Junction adherence cell connections, β-catenin protein is one of the components of the signaling Wnt message pathway. This transmission path begins with the binding of Wnt ligands to Frizzled receptors on the cell membrane surface [26]. Normally, the amount of catenin-β protein in the cell is very low, and its value is controlled by a protein complex composed of APC [Adenomatous polyposis coli], CKIα, GSK-3β, and Axin. By activating the Wnt message transmission pathway, the β-catenin protein degradation complex is inactivated and the amount of cellular β-catenin protein increases. By destroying cellular connections, the β-catenin protein is isolated from E-cadherin and enters the cell nucleus with LEF1/TCF transcription factors, initiating the transcription of target genes. In many cancers of the epithelial tissues, CDH1 gene expression is reduced or stopped [27]. Therefore, the connections between the cells are weakened and the phenomenon of migration and metastasis of cancer cells begins. Decreased or no expression of E-cadherin protein in cancer cells also causes epithelialmesenchymal transition(EMT) [28]. In this phenomenon, epithelial cells lose their polar and leaf morphology and take on the morphology of mesenchymal cells capable of migration. Therefore, one of the ways to inhibit metastasis of epithelial cancer cells is to induce the expression of the gene that forms the E-cadherin protein and strengthens the junction adherence to cell connections. In this study, we successfully transferred the apoptin gene by lentivirus vector, and the rate of expression of the E-cadherin gene increased over time. The results of PCR showed that the lentivirus vector could affect PC-3 cells by increasing the expression of E-cadherin gene expression in prostate cancer cells.The results of this study show that one of the best ways to transfer genes to cancer cells that are highly resistant to medications is to use a viral lentivirus vector.