The ovarian tumor is one of the common malignant tumors of female reproductive system, and the incidence rate is second only to cervical cancer and endometrial cancer[1]. Epithelial cancer is the most common in ovarian tumors, and the death rate of ovarian epithelial cancer is the first among various gynaecological tumors, which seriously threatens women’s lives[2]. Most cancers are detected in advanced stages, so it is important to find effective markers to determine the occurrence of the disease. MicroRNAs (miRNAs) constitute a class of small non-coding RNA molecules that function as post-transcriptional gene regulators and have been increasingly recognized as oncogenes or tumor suppressors[3]. Studies have shown that a variety of miRNAs could be involved in the regulation of occurrence and development of the same disease and the same miRNA could occur in multiple diseases[4]. Therefore, miRNAs can be used as a biological marker of disease to predict its occurrence.

Blood samples were selected from 44 patients with ovarian cancer and 47 healthy people in the Taizhou People’s Hospital, and the samples were divided into the model group and the control group. At the time of admission, the basic information and various evaluation indicators were recorded and samples were taken for testing.

ES-2 cells and normal ovarian epithelial cells were purchased from Shanghai Enzyme Research Biotechnology Co., Ltd. Cells were seeded in a 10 cm cell culture dish and the medium were made up of 10 % fetal bovine serum (FBS, Gibco) and 1 % P/S at 37° in a humidified atmosphere of 5 % CO2 and 95 % air. The expression of miRNA-21-5p in two groups was detected by RT-PCR[7,8].

The Starbase, Target Scan, Tarbase[9-11] databases were used to predict the downstream target genes regulated by miRNA-21-5p. The downstream target genes of miRNA-21-5p were predicted using these three databases and introduced into the Venn diagram generator respectively, and the target included in 3 groups were taken out. Targets associated with ovarian cancers were selected for follow-up studies.

Luciferase reporter assay was performed to identify the relationship between miRNA-21-5p and BTG-2. In brief, ES-2 cells at 80 % confluence were co-transfected with wild-type or mutant BTG-2 3′-UTR reporters together with miRNA-21-5p or negative control using Lipofectamine 2000. The plasmid (Promega) encoding luciferase was used to control for transfection efficiency. Cells were lysed 24 h after transfection and tested for luciferase activities using the Dual-Luciferase Reporter Assay System (Promega), according to the manufacturer’s instructions[12].

MiRNA-21-5p inhibitor oligonucleotide (Ribobio, 20 μM) was transfected into cells using Lipofectmine 2000 (5 μl) in a 6-well plate. Cells were divided into 3 groups, the control group, the model group and the inhibitor group. Cells were prepared for the following experiments.

Cells were lysed in the radioimmune precipitation assay buffer with the protease inhibitor cocktail (Sigma), separated on sodium dodecyl sulfate polyacrylamide gels and transferred to a polyvinylidene fluoride membrane. The membrane was incubated with antiBTG-2 and antiβ-actin (Abcam, Cambridge, MA, USA) at 4° overnight, followed by incubation with horseradish peroxidase-conjugated secondary antibody for 1 h. Bands were visualized with ECL[14].

All data’s were analysed by SPSS version 13.0 (SPSS, IL, USA) and graphs were drawn by GraphPad Prim 5.0 software. The normal distribution of the data was detected by Box plot. The data conforming to the normal distribution was expressed as mean±standard deviation (SD) and the comparison between groups were analysed by variance and the t-test was used for comparison between two groups. If the measurement data is non-normally distributed, the results were expressed as median and non-parametric test; the count data is expressed by rate or composition ratio and a chi-square test was performed. p<0.05 was considered statistically significant. 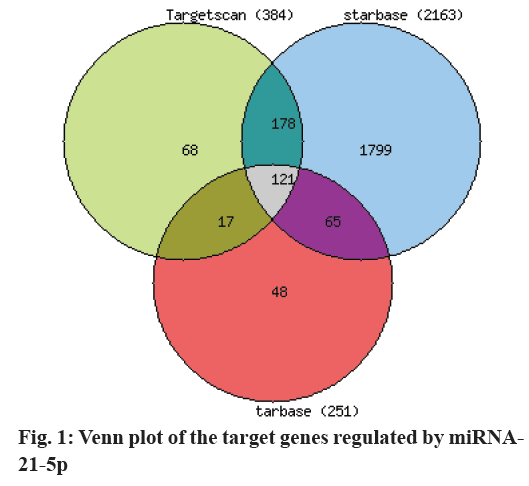 According to the database search results, there were 121 genes regulated by miRNA-21-5p, and BTG-2 was a gene closely related to the development of ovarian cancers, it was predicted that miRNAs regulated BTG-2 expression. The results showed that miRNA- 21-5p is one of the miRNAs to regulate BTG-2 (fig. 2). To validate that the miR-21-5p’s function is to directly regulate BTG-2 expression, a binding site was found between miRNA-21-5p and BTG-2 to identify its mechanism. The binding site between miRNA-21- 5p and BTG-2 were mutated to determine the binding ability of these 2 genes. The results of luciferase reporter assay showed that the miRNA-21-5p could bind to BTG2-WT and decrease the fluorescence intensity, but the mutation of BTG-2 cannot bind to miRNA-21-5p, and the fluorescence intensity is not affected by the amount of miRNA-21-5p expression (fig. 3). These results indicated that BTG-2 is a target gene directly regulated by miRNA-21-5p. 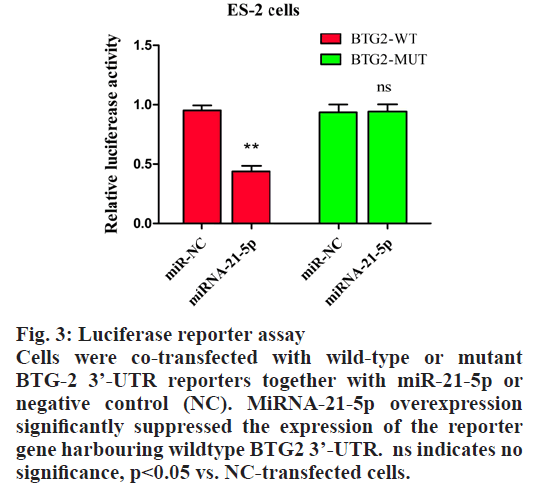 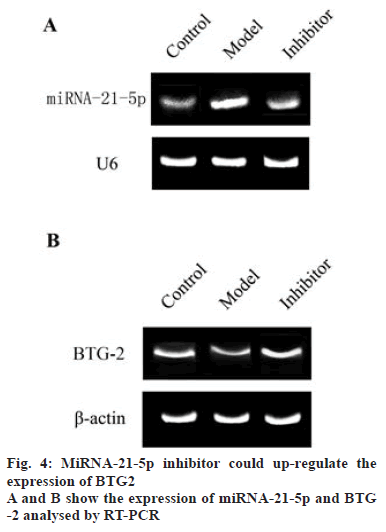 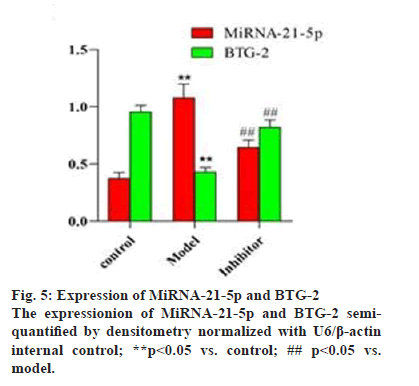 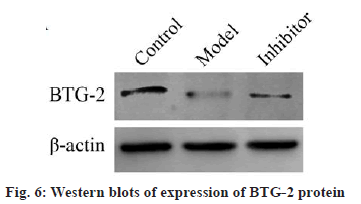 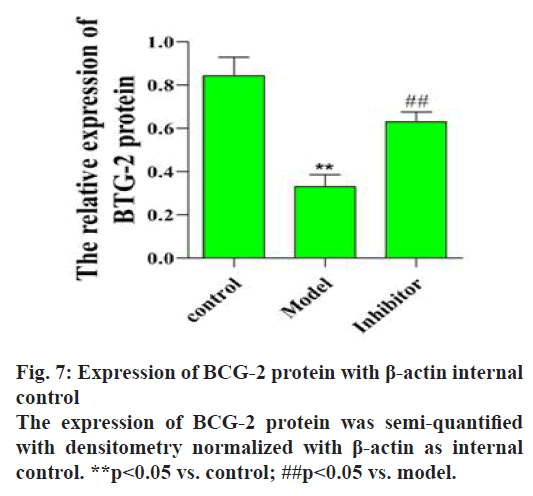 The development of cancer is a multi-gene, multi-step complex biological process[15]. Due to the diversity of morphological and biological characteristics of ovarian tissue, ovarian cancer is considered as a heterogeneous malignant tumor disease rather than a single disease. Currently, ovarian cancer is a common malignant tumor in female reproductive system. About 75 % of patients are diagnosed after the cancer is advanced and metastasized throughout the peritoneum, pleura or even liver[16] and the specific mechanisms and initiating factors are still not fully understood. Therefore, it is of great significance to study the early biological markers of ovarian cancer.

MiRNAs are endogenous small RNA that can treat diseases to inhibit its translation or promote its degradation by binding to the target gene[17]. The expression of some miRNAs is closely related to the occurrence and development of diseases. Among them, tumor-related diseases are one of the hottest areas of research, involving tumor proliferation[18], migration[19], apoptosis[20] and drug tolerance. In general, one miRNA molecule may have multiple target genes and one gene may also be regulated by multiple miRNAs molecules simultaneously.

As one of the most well-known oncogenic miRNAs, miRNA-21 is highly expressed in many tumor tissues[21]. It has been reported that miRNA-21 is highly expressed in ovarian cancer, indicating that miRNA-21 plays an role important in the development of ovarian cancer[22]. MiRNAs can regulate the expression levels of many protein-coding genes more accurately and have become one of the research hotspots in the medical field. Intensive research on miRNAs may bring substantial changes in clinical cancer treatment. Recent studies have shown that a variety of miRNAs play an important role in the development of ovarian cancer and clinical detection of the expression of certain or some miRNAs can be used as an independent biological marker[23].

BTG-2 is a member of the BTG/TOB antiproliferative gene family. Studies have shown that the BTG-2 gene may be involved in tumor cell proliferation, metastasis and regulation of cell cycle progression[24]. Therefore, the BTG-2 gene may be a target gene for the treatment The results of this study suggested that BTG-2 may be an ideal target gene for the treatment of ovarian cancer. Rapid proliferation of cancer cells is the ultimate step in the development of solid tumors and is the most common cause of death in cancer patients. Controlling the unrestricted proliferation of tumor cells can improve the survival rate of cancer patients, and BTG-2 plays an important role in the development of tumors.

We appreciate the support of the Taizhou People’s Hospital.