Diabetic retinopathy (DR), a type of visual impairment and blindness-producing complications of diabetes mellitus occurring among working-aged adults around the world[1]. Several DR patients may have accompanying serious complications, such as diabetic heart disease, high blood pressure and kidney diseases. Medical treatment include laser treatment and adjuvant oral medication to control deterioration of fundus lesions and to prevent retinal bleeding[2-4]. However, traditional therapy may cause certain poor outcomes and side effects. Traditional Chinese medicine has accumulated abundant information revealing the etiology, pathogenesis and treatment of DR. Although recent studies have reported the pathogenesis of retinal microvascular endothelial cells (RMECs) apoptosis, the underlying mechanisms were largely unknown[5,6].

Mailuoning is a traditional formula, mainly composed by Radix Scrophulariae, Dendrobium, Achyranthes bidentata, honeysuckle and Radix codonopsis [7]. A body of evidence reported that mailuoning could be used to treat thromboangiitis obliterans, arterial occlusion and acute ischemic stroke. Moreover, mailuoning injection was used for improving microcirculation, blood flow and cardiovascular diseases[8,9]. However,  the  effect  of mailuoning on DR remained largely  unknown.  The dried flower buds of the first blooming flowers of honeysuckle, Lonicera japonica Thunb. are the main components of mailuoning[10-12]. It has the effect of clearing away heat and detoxification, cooling wind and heat[13-15]. It is widely used as antiinflammatory in the clinic. Chemical analysis showed that honeysuckle mainly contains luteolin[16]. In the present study, the effects of mailuoning and luteolin on RMEC apoptosis was evaluated in order to assess the promising role of mailuoning and luteolin in the clinical treatment of DR.

To explore damage to RMECs in DR, high glucose conditions were simulated. Briefly, cells were exposed to normal glucose (5 nM) and high glucose (30 nM) and cultured for 24 h at 37° under 5 % CO2  in a humidified atmosphere. Culture medium was changed every 24 h before performing experiments.

Cells were seeded in 96-well plates at a density of 1×105 cells/well and starved for 12 h. Then, different concentrations of mailuoning (50, 100, 200, 250, 300 μg/ml) were added and cultured for another 24 h. Cell viability was measured using the MTT assay under the manufacturer instructions. First, cells were incubated with 0.8 mg/ml MTT for 4 h, washed thrice with PBS, DMSO was added to complete dissolution. The absorbance at 450 nm was measured on a Microplate Reader (Bio-Tek Technologies, USA).

TUNEL staining assay was applied to determine apoptotic cells following the manufacturer’s protocol. In brief, the collected cells were  treated  with  low  and high glucose and 100 μg/ml mailuoning. Then, percent apoptotic cells was detected by terminal deoxyribonucleotidyl transferase-mediated dUTP- biotin nick end labelling method. Afterward, the nuclei were labelled with 4’,6-diamidino-2-phenylindole (DAPI). Finally, positive cells were imaged under a fluorescent microscope and the ratio was calculated by TUNEL-positive cells to the total cells.

Cells were seeded into 96-well plates at the density   of 1×105 cells/well and cultured at 5 % CO2 in a humidified atmosphere at room temperature. The flow cytometry analysis was performed using Annexin V-FITC-PI Apoptosis Detection Kit (Vazyme Biotech, Nanjing, China). In brief, cells were washed with PBS and collected via centrifugation at 1000 rpm for  5 min. Then, the treated cells were stained with Annexin V/PI at room temperature for 15 min. The data were assessed by flow cytometry (FACSCalibur; Bio-Rad Laboratories, Inc., Hercules, CA, USA) and analyzed using BD Accuri C6.

For real-time fluorescence quantitative PCR, TRIzol (Invitrogen, USA), TriPure Isolation Reagent kit (Roche, USA) and Gene JETRNA purification kit (Invitrogen) were used to collect cellular RNA after different treatments. Reaction conditions were as follows, random primers and cDNA was mixed and incubated at 70° for 5 min, quickly cooled on ice for    5 min, buffer, reverse transcriptase, nucleotides and magnesium ions were added, annealed at 25° for 15 min and extended at 42° for 60 min. Reaction conditions maintained were, pre-denaturation at 95 for 5 min, denaturation at 95° for 1 min, annealing at 60° for     30 s, and extension at 70° for 30 s, for a total of 45 cycles. KAPASYBRFASTqPCRMasterMix (KapaBiosystems, USA) and CFX96 (waveguide, USA) RT-qPCR was used to detect the amplified fluorescence  intensity  and the 2-DDCT method was used to calculate gene expression level. The primers used in this study were, β-actin, F- 5’-CCTGTACGCCAACACAGTGC-3’, R-5’- ATACTCCTGCTTGCTG ATCC-3’; the       primer sequences of Bcl-2, F- A T G C C T T T G T G G A A C T A T A T G G C , R- GGTATGCACCCAGAGTGATGC; Bax, F- TGAAGACAGGGGCCTTTTTG, R- AATTCGCCGGAGACACTCG.

Each group of cells was lysed with RIPA lysate. After homogenization, the protein was extracted. A small amount of supernatant was aspirated and the protein was quantified  by  the  BCA  method.  Afterwards, the remaining supernatant was transferred to a new 1.5 ml centrifuge tube and the corresponding volume of 5 ml was added, loading buffer, boiled in boiling water for 10 min. Equipped with glue and loaded after centrifugation. Protein electrophoresis was performed using polyacrylamide gel, 90 mA constant flow membrane, 50 g/l milk blocking for 1 h, and rabbit antiVEGFR2 and p-VEGFR2 primary antibodies (Abcam, 1:1000) were incubated overnight. On the second day, the corresponding secondary antibody (1:10000) labelled with horseradish peroxidase (HRP) was incubated and developed with ECL. The Bio-Rad digital imaging system was used to take pictures and save the analysis pictures. Finally, further statistical analysis.

The cells were collected after different treatments and the corresponding ELISA kit was used for detection according to the instructions of the kit.

All the statistical data were presented as mean±standard deviation (SD). SPSS 17.0 for windows (Chicago, IL, USA) software and GraphPad Prism 5.0 (GraphPad Software, Inc., La Jolla, CA, USA) were used to analyze the data. Student’s t-test was applied to assess the differences between the two groups while one-way analysis of variance (ANOVA) followed by Dunn’s post hoc test was performed to distinguish differences among 3 or more groups. Values of p<0.05 suggested statistical significance. All the experiments were performed in triplicate. 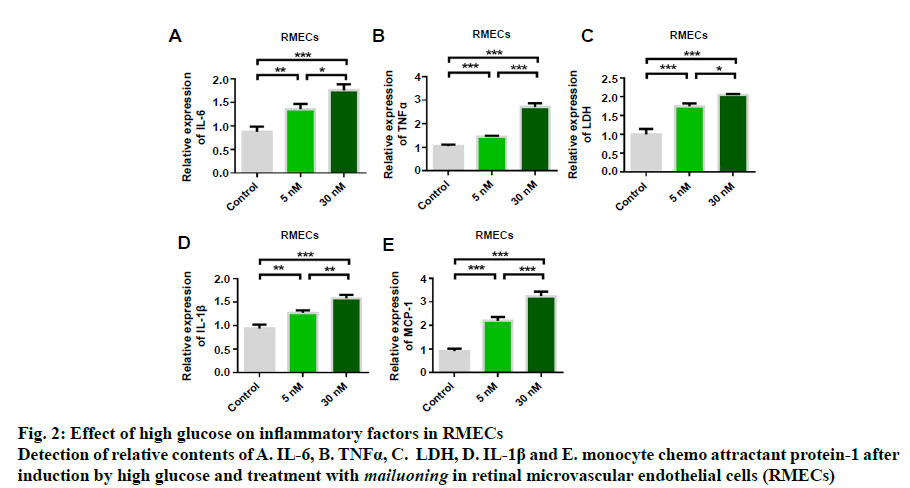 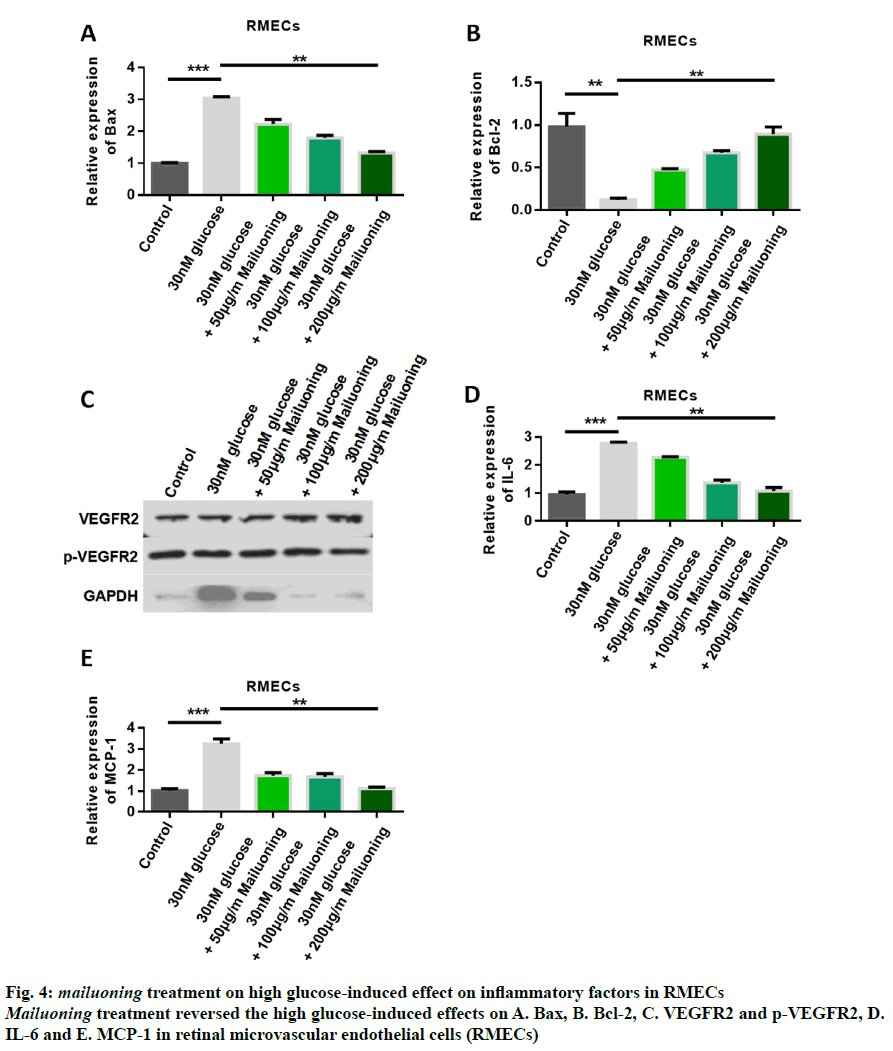 Exposure to high glucose could result in diabetes-related microvascular and macrovascular complications[17,18]. Furthermore, it is well-documented that high glucose treatment could contribute to diabetic microvascular lesion. DR is the manifestation of diabetic microvascular lesions in the unique environment of the fundus, mainly caused by chronic high glucose[19,20]. High  glucose  may result in tissue ischemic hypoxia, which was related to a series of pathological changes, including leakage of retinal microvessels, retinal tissue edema, vitreous haemorrhage, tractional retinal detachment and blindness. The early changes of DR were presented as retinal injury, thickening of capillary basement membrane, loss of peripheral cells and abnormal apoptosis of RMECs. Recent studies showed that inhibition of apoptosis of RMECs could protect against DR[5,21-23]. The present study aim was to investigate the role of mailuoning and luteolin in preventing high glucose-induced RMECs apoptosis in DR.

Long-term chronic microvascular damage is the typical characteristic of the progress of DR. Meanwhile, high glucose and hypoxia are the two common and leading causes of diabetic vascular injury. Hence, experimental models of DR were widely constructed under high glucose or hypoxic conditions. Accumulated evidence revealed that abnormal apoptosis and dysfunction of RMECscontributetotheinitialetiology of microvascular injury that leads to DR. In the present study, a model of high glucose-induced DR was constructed by exposing RMECs to high glucose concentration to explore the mechanisms of the effect of mailuoning on apoptosis of RMECs.

The results of this study indicated that mailuoning and luteolin could attenuate the apoptosis induced by high glucose. Hence, mailuoning formula may be a novel and promising medication to treat DR in future.

This work was supported by the Science and Technology Development Plan Project of Nanjing (No. 201715063).