Diabetes is a common metabolic disease, burdening human life, health and medical expenses [1]. It is estimated that there were 451 million patients with Diabetes Mellitus (DM) worldwide in 2017 and the number would be 693 million by 2045 [2]. Patients with DM usually suffer from various complications of which diabetic foot ulcer is considered to be one of the most serious complications [3]. Although a great progress has been achieved in the overall clinical medicine over the past few decades, there is still no effective treatment for diabetic foot ulcer widely used [4]. Metformin (MET) is a derivative of biguanides and a first-line drug for the treatment of type 2 DM [5]. Many evidences have verified that MET not only has good hypoglycemic effect, but also can promote diabetic wound healing [6,7], but the mechanism is still under investigation.

MicroRNA (miRNA) is a highly conserved non-coding small RNA, 18-25 nucleotides in length, which is widely found in animals and plants. It can affect cell differentiation, proliferation, metabolism as well as apoptosis by suppressing the transcription of proteincoding genes or by accelerating messenger RNA (mRNA) degradation of them [8]. With the deepening understanding of microRNA (miR), it is acquired that miR is a crucial participant in skin growth [9]. Earlier studies have revealed that MET can regulate the basic biological behavior of cells through regulating miR, thus affecting disease development. For example, MET can inhibit the growth of renal cancer cells by increasing miR-26a [10] and it can inhibit the proliferation of liver cancer cells and induce their cycle arrest by regulating miR-378 [11]. In addition, MET can also ameliorate skeletal muscle insulin resistance through suppressing miR-21 expression [12]. As a widely studied miR, miR- 126 is found to be elevated in patients with type 2 DM, while its expression is down-regulated after MET treatment [13,14]. Poor diabetic wound healing is the result of a combination of many factors and the decrease of proliferation of fibroblasts and the increase of apoptosis of them are key factors [15]. In addition, according to previous studies, miR-126 can regulate the proliferation and apoptosis of fibroblasts [16,17]. We suspected that the effect of MET on diabetic wound healing may be related to the regulation of miR-126 on the proliferation and apoptosis of fibroblasts.

In our study, we mainly analyzed the influence of MET on the proliferation and apoptosis of Advanced Glycation End products (AGEs)-induced primary skin fibroblasts and the relationship between MET and miR- 126.

Human skin fibroblast lines (HSF2) purchased from Shanghai SIMR Biotechnology Company were incubated in dulbecco's modified eagle medium (DMEM) supplemented with 15 % fetal bovine serum (FBS; Gibco, USA), 100 U/ml penicillin (Gibco, USA), as well as 100 U/ml streptomycin (Gibco, USA) in a 5 % CO2 incubator at 37° and then the cells were passaged when they reached 80 %-90 % confluency after they attached to the wall and sprawled out.

Treatment with AGEs (BioVision, USA): HSF2 cells in logarithmic growth stage were taken and AGEs was diluted with complete culture medium to 100, 200 and 300 μg/ml, separately. A 16 well plate was added with cell culture solution containing different concentrations at 100 μl/well and the control group was added with only 100 μl complete culture medium.

Treatment with MET (Sigma, USA): Cells were added with 100 μl MET at different concentrations (5, 10 and 20 mmol/l) separately, after being treated with 300 μg/ml AGEs, while the control group was added with only 100 μl complete medium.

Total RNA was obtained from cells through a TRIzol kit (Invitrogen Company, USA) and its concentration, purity, as well as integrity were determined using an ultraviolet spectrophotometer and agarose gel electrophoresis. Afterwards, reverse transcription was performed on the total RNA using a reverse transcription kit (Invitrogen, USA) and amplification was performed through SYBR_Premix ExTaq II (Takara, Dalian, China) under the amplification system consisting of 20 μl total reaction volume with 10 μl SYBR Premix Ex Taq II (2X), 2 μl complementary DNA (cDNA), 0.8 μl upstream primer, 0.8 μl downstream primer, as well as sterile purified water added to adjust the volume. The amplification conditions: 95° for 30 s, followed by 40 cycles of 95° for 5 s and 60° for 30 s. Data in this study were analyzed through 2-ΔΔct [18].

Treated cells were harvested and prepared into 1×105 cells/ml cell suspension and the suspension was transferred to a 96 well plate. CCK-8 solution (10 μl; Dojindo, Japan) was put in each well at 24 h after culturing, followed by 2 h incubation with dark surroundings. Finally, the optical density of cells in every well at 490 nm was determined through a microplate reader (Molecular Devices, USA) and corresponding growth curves were drawn.

Treated cells were harvested and trypsinized through 0.25 % trypsin and then prepared into 1 X 106 cells/ ml suspension. The suspension was put with Annexin V-FITC/propidium iodide (PI) (MultiSciences (Lianke) Biotech Co., Ltd., Hangzhou, China) in order, incubated at indoor temperature with dark surroundings for 5 min and finally the apoptosis of the cells was detected using a flow cytometer.

The cells to be determined were collected and digested with trypsin and then centrifuged to discard the supernatant. Subsequently, the cells were added with Phosphate Buffered Saline (PBS) to resuspend the cells and then the cells were crushed by an ultrasonic cell crusher, followed by 3500×g centrifugation for 10 min to collect the supernatant. Finally, the activities and levels of Malondialdehyde (MDA), Superoxide Dismutase (SOD) and Catalase (CAT) in the supernatant were quantified using corresponding MDA, SOD and CAT kits (all purchased from Nanjing Jiancheng Bioengineering Institute) according to kit instructions. 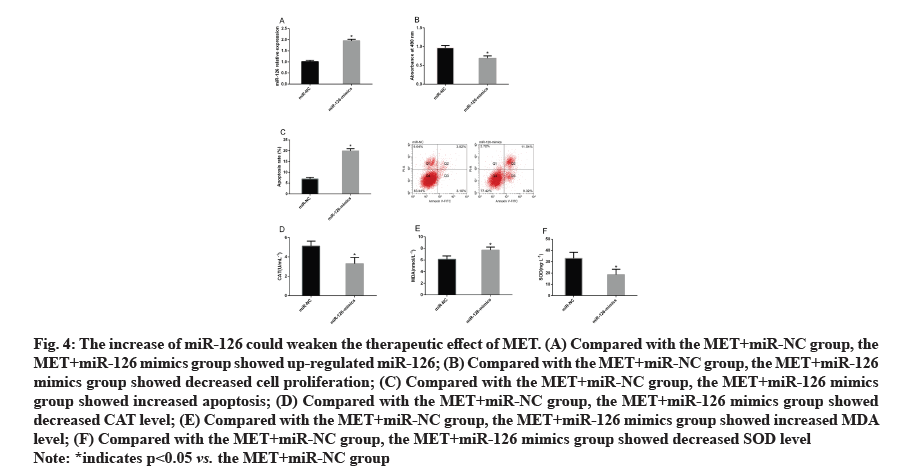 About one quarter of patients with DM suffer from foot ulcers at some point in their lives and despite drug treatment, more than two thirds of the patients will suffer from unhealed wounds [19,20]. At present, the pathogenesis of diabetic skin lesions is still unclear and exploring its mechanism has crucial clinical value for improving the prognosis of patients. In our study, we mainly analyzed the influence of MET on the proliferation and apoptosis of AGEs-induced skin fibroblasts and the relationship between MET and miR-126, finding that MET inhibited AGEs-induced apoptosis and oxidative stress of human skin fibroblasts by downregulating miR-126.

AGEs are harmful metabolites, which have been found to accumulate in large quantities in patients with DM compared with healthy individuals [21]. One previous study has revealed that AGEs are a primary cause of skin fibroblast death in patients with DM [22]. Fibroblasts are the main cells that synthesize and secrete collagen and fibronectin play a key role in wound healing. Changes in the function of skin fibroblasts are one of the main reasons for poor wound healing in patients with DM [15]. In this study, we found that after being treated with AGEs, HSF2 cells showed inhibited proliferation ability, increased apoptosis rate and a concentration dependence. AGEs can induce the production of reactive oxygen species in cells and cause oxidative stress, thus damaging skin fibroblasts [23,24]. This study found that after treatment with AGEs, the MDA level in skin fibroblasts increased, while the SOD and CAT levels in them decreased, which implied that AGEs are one of the important killers that lead to unnatural apoptosis and oxidative stress damage of fibroblasts. One earlier study has revealed that MET can reduce the formation and accumulation of AGEs in human body [25], which suggests that MET can protect skin fibroblasts from AGEs. Our results also verified that MET can weaken the effects of AGEs on the function and oxidative stress of skin fibroblasts.

This study has verified that MET can inhibit AGEsinduced apoptosis and oxidative stress of skin fibroblasts and it may be related to the regulation of MET on miR-126. We reviewed previous researches on the role of miR-126 in human diseases and found that miR-126 can participate in the progression of diseases by activating or inhibiting some common pathways, such as Phosphatidy Linositol 3-kinase/protein kinase B (PI3K/Akt) and Ras homolog family member A (RhoA)/ Rho-associated protein kinase (ROCK) (RhoA/ROCK) [26,27]. Therefore, we suspected that MET can affect the biological behavior of human skin fibroblasts through regulating miR-126 and mediating related pathways, which can be extensively studied in the future to further explore the potential mechanism of MET in promoting wound healing in patients with DM.