Parenteral administration of proteins/peptides requires repeated injections because of their extremely short biological half-life. Daily multiple injections are highly risky and require close medical supervision. Therefore, the delivery of proteins and peptides by routes other than parenteral route has gained much attention in recent years. As a drug delivery route, nasal cavity offers several possible advantages. The nasal epithelium is highly vascularized and offers a relatively large surface area for drug absorption. In addition the porous endothelial basement membrane and the direct transport of absorbed drugs into the systemic circulation, avoids the hepatic first-pass effect present in peroral administration. Further since the nasal membrane posses lower enzymatic activity compared with the gastrointestinal tract and the liver [1].

In the present project mucoadhesive chitosan microspheres were prepared for non-invasive delivery of insulin. Chitosan is a widely used mucoadhesive polymer. It is a cationic hydrophilic polysaccharide comprising copolymers of glycosamine and Nacetylglucosamine and can be derived by partial deacetylation of chitin from crustacean shells [2]. Chitosan microspheres have been reported to provide controlled release of many drugs and these microspheres are being investigated for both for parenteral and oral drug delivery [3].

Therefore, it was aimed to exploit the mucoadhesive property of natural polysaccharide, chitosan and higher permeability, less hostile environment and extended surface area of nasal mucosa to develop mucoadhesive microspheres bearing insulin for the painless delivery of insulin. Insulin has been taken as model peptide. As insulin represents a polar, hydrophilic peptide of a comparatively high molecular mass, its nasal delivery is a challenging task.

The chitosan microspheres were prepared by modified emulsification technique reported by Thanoo et al. [4]. A 4% w/v solution of chitosan was prepared in 5% aqueous acetic acid. This solution (6.5 g) was dispersed in 37.5 ml of liquid paraffin (1:1mixture of light and heavy) containing 0.15 g of Span 80 in a 100 ml beaker. The dispersion was stirred using a stainless steel half-moon paddle stirrer at various speeds (1000-4000 rpm) for 2 min and glutaraldehyde saturated toluene solution (1-4 ml) or 1 ml of aqueous solution of citric acid (1-4%) was added and stirring was continued (1-4 h). After the stipulated stirring time, the microspheres were centrifuged, washed several times with hexane, methanol and finally with acetone. The microspheres were then dried at 50°. Formulations having varying compositions were prepared in order to optimize the process parameters (Table 1).

Drug loading was carried out by the method reported by Bjork and Edman [5]. Preformed microspheres (100 mg) were incubated with 100 IU of insulin. The gel was freeze dried overnight till after which an orange, pale red to brown powder was recovered. It was then, passed through a 63 μm sieve and stored in dry place at 4° to 8°. The insulin-loaded microspheres were subjected to scanning electron microscopy (SEM). During loading, 1.0% sodium taurocholate (permeation enhancer) and 0.1% aprotinin (protease inhibitor) were mixed in the drug solution so that they could also be loaded in the preformed microspheres.

A definite quantity (100 mg) of insulin-loaded microspheres was weighed and digested overnight by suspending in 5 ml of 0.5 M acetic acid and 5 ml of 0.5 M sodium hydroxide at 10°. The pH was adjusted to 5.0 by further addition of acetic acid. The digested homogenate was diluted with PBS pH 6.4 and centrifuged at 3000 rpm for 15 min. The supernatant was taken and the drug content was determined spectrophotometrically at 270 nm. Effect of glutaraldehyde concentration and citric acid concentration on drug payload was observed.

Mucoadhesion of microspheres was assessed using the method reported by Mumtaz and Ching [6] with little modifications. Briefly, a strip of she goat intestinal mucosa was mounted on a glass slide and accurately weighed microspheres were placed on the mucosa of the intestine. This glass slide was incubated for 15 min in desiccators at 90% relative humidity to allow the polymer to interact with the membrane and finally placed in the cell that was attached to the outer assembly at an angle of 45°. Phosphate buffered saline (pH 6.4) previously warmed to 37±0.5° was circulated all over the microspheres and membrane at the rate of 1ml/min with the help of peristaltic pump. Washings were collected at different time intervals and microspheres were collected by centrifugation followed by drying at 50°. The weight of washed out microspheres was determined and percent mucoadhesion was calculated by the method given by Takeuchi et al. [7]. Percentage mucoadhesion= (Wa- W1)×100/Wa, where Wa is the weight of microspheres applied and W1 is the weight of microspheres leached out.

The drug release from different formulations was determined using treated cellophane membrane and Franz diffusion cell (Crown Glass Company, USA). The treated cellophane membrane was fixed between the donor and receptor compartment of the diffusion cell to support the microspheres. Microspheres (100 mg) were placed on the cellophane membrane in the donor compartment contained PBS (pH 6.4) maintained at 37±1°. The samples were withdrawn periodically for 24 h and replaced with fresh PBS (pH 6.4). The samples were analyzed spectrophotometrically for drug content at 270 nm.

Drug permeation through mucosal membrane was assessed using she goat intestinal mucosa for ensuring in vivo drug absorption. The mucosal membrane was placed between the donor and receptor compartment of the Franz diffusion cell. Weighed quantity of microspheres suspended in PBS (pH 6.4) was kept in the donor compartment, while the receptor compartment was filled with PBS (pH 7.4) at 37±1°. Samples were withdrawn at regular time intervals for 24 h and replaced immediately with fresh PBS (pH 7.4). These samples were analyzed spectrophotometrically at 270 nm for drug content.

The in vivo performance of mucoadhesive microspheres was evaluated on albino rabbits in which diabetes were induced. Twelve rabbits of either sex weighing between 1.5 to 2.0 kg were made diabetic by administering intravenous injection of streptozotocine solution in citrate buffer pH 5.0 (65 mg/kg) for 4 to 5 days. The animals that showed fasting blood glucose level more than 300 mg/dl confirmed induction of diabetes were taken for study. These rabbits were divided into 3 groups of 4 rabbits in each group and their blood glucose level after overnight fasting was determined. Animals of the first group received placebo microspheres whereas rabbits of second and third group were administered with drug containing glutaraldehyde cross linked and citric acid cross linked microspheres respectively. The microspheres were administered (equivalent to 10 IU/kg body weight) into each nostril of the rabbit with the help of nasal spray. During the experiment, the body temperature of the rabbits was maintained at 37o with the help of a heating pad. The blood samples were collected by an indwelling catheter from the marginal ear vein. The serum was separated from the blood samples by centrifugation at 3000 rpm for 10 min and then blood glucose level was estimated using glucose assay kit (Autopak, Bayer Diagnostics) on a blood Auto Analyzer (Technicorn RA-50, Italy). Percent reduction in blood glucose level was calculated using the formula, % Reduction in blood glucose level = [Blood glucose level (before drug administration-after drug administration)/ blood glucose level before drug administration]×100

Over the last few decades, the use of mucoadhesive polymers as a non-toxic alternative to enhancer systems has been investigated. Chitosan is such an excellent mucoadhesive and biodegradable polymer and also reported to have penetration enhancing ability. Microspheres were cross-linked with chemical cross linking agents to control the release of drug from the particulate system. Microspheres were cross-linked covalently and ionically with glutaraldehyde saturated toluene solution and 1% of aqueous solution of citric acid respectively to observe the effect of cross-linking mechanism on the various evaluation parameters of formulations. Glutaraldehyde cross-linking of chitosan is an instantaneous reaction. The aldehyde groups form covalent imine bonds with the amino group of chitosan, due to the resonance established with adjacent double ethylene bonds [8,9] via a Schiff reaction and the links with hydroxyl group of chitosan is also possible [10]. Glutaraldehyde saturated toluene solution was used instead of aqueous glutaraldehyde solution to obtain good spherical geometry and surface smoothness of chitosan microspheres. In case of citric acid cross-linking, ionic bridges are formed between the positively charged amine group of chitosan and negatively charged carboxylate ion of acid. Ionic interaction between the negative charges of cross-linking agent and positively charged groups of chitosan are main interaction inside the network [11]. Other additional interactions such as hydroxyl groups could also react with cross linker [12] and/or formation of interchain hydrogen bonds could also be possible [13]. The insulin was loaded in preformed microspheres to avoid the effect of process variable by in situ loading technique with little modifications [5]. 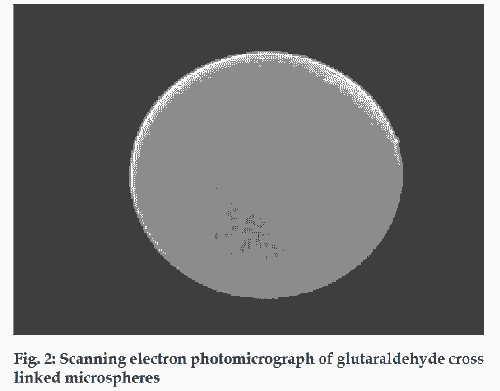 Similarly, the effect of cross linking agent concentration on drug payload was studied and found that on increasing the concentration of the cross linking agent the drug loading efficiency of the microsphere was decreased (Table 1). The decreased drug payload by increasing the cross linking of the polymer could be due to increased rigidity of polymer surface, more dense structural arrangement of crosslinked polymer and lesser polymer swellability. The drug payload was observed slightly higher in case of glutaraldehyde cross-linked microspheres, which could be explained on the basis of formation of covalent network. The conformational change of chitosan with glutaraldehyde leads to the formation of a permanent network due to the stronger covalent bond between the two reactive groups of glutaraldehyde and chitosan polymer chains [11]. Therefore, glutaraldehyde cross-linking leads to development of organized free diffusion passages, which could facilitate the entry (diffusion) of drug. In case of citric acid cross linking the network formed is unorganized and further the passage of drug could be hindered by the development of secondary attraction between the charged polymer groups and anions of citric acid molecule.

Further the, swellability is an indicative parameter for rapid availability of drug solution for diffusion with greater flux. It was found that degree of swelling decreases with increasing the concentrations of cross-linking agents (Table 1). On increasing the glutaraldehyde concentration from 1ml to 4ml, the degree of swelling of microspheres was found to decrease from 1.1762±0.11 to 0.7544±0.09, whereas on increasing the citric acid concentration from 1 to 4%, the degree of swelling of various microspheres was decreased from 1.1437±0.24 to 0.7106±0.21, respectively. The higher concentration of cross linking agents increase the rigidity of the polymer surface and also decrease the hydrophilic groups available in the chitosan molecule that are responsible for swelling. Swelling ability of glutaraldehyde cross linked microspheres was found to be pronounced than citric acid cross linked microspheres, which could be due to the reasons explained in above paragraph.

The mucoadhesive microspheres were assessed to establish the release kinetics of insulin. The in vitro drug release studies were performed in phosphate buffered saline (pH 6.4), as the pH of the nasal fluids is around 6 to 7. The results revealed that increase in the concentration of cross-linking agents cause the reduction in percentage drug release. Cumulative drug release after 24 h was decreased from 77.06±3.85% to 70.03±3.50% with increasing the glutaraldehyde concentration from 1.0 ml (DG1E) to 4.0 ml (DG4E). Similarly, on increasing the citric acid concentration from 1% (DC1C) to 4% (DC4C), cumulative drug release was deceased from 75.59±3.77% to 68.94±3.44%. In this case drug release was seen to decrease in a more sustained manner in comparison to glutaraldehyde cross linking (fig. 3). It could be due to the establishment of ionic equilibrium within the citric acid cross linked polymer. Another reason could be the degree of ionization of amine group, which decreases greatly when the solution pH increased above 6.0 (around the pKa of chitosan 6.3) [14] and at pH higher than 7.5 usually less than 10% of amine groups are ionized [15]. At pH 6.4, sufficient charge density at amine groups could be available to hold anionic cross linker as citric acid (a weak acid) attributes significant charge density at this pH. These ionic attractions along with secondary attractions i.e. hydrogen binding etc. provide firmness to polymer network, which results in more sustained drug release. 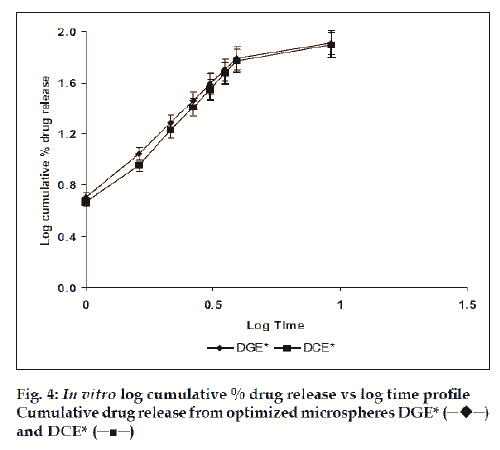 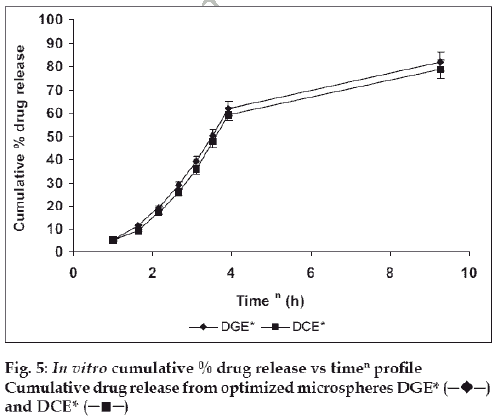 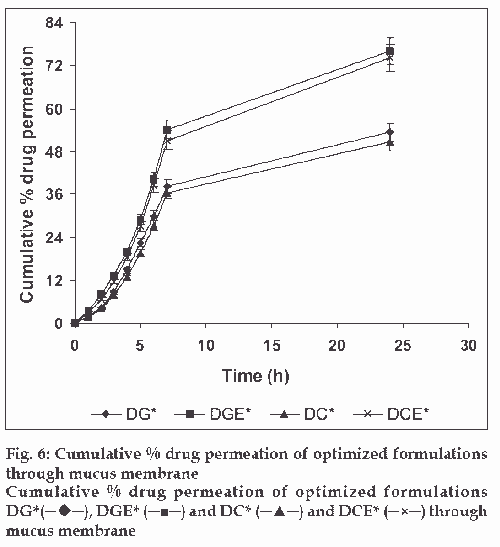 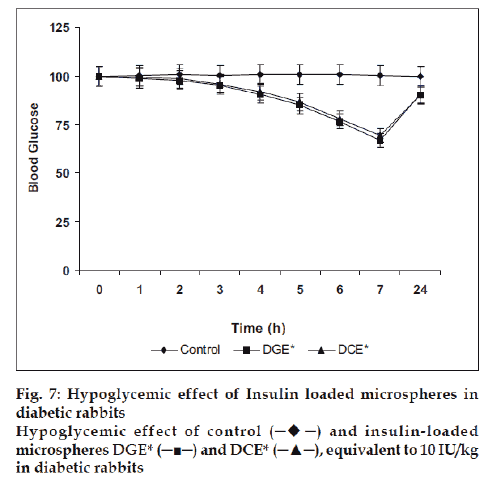 In conclusion, it can be concluded that with mucoadhesive microspheres containing protease inhibitors and permeability enhancer can improve the bioavailability of the protein/peptide drugs in a much better way. This system showed a better response in replacing the need for parental administration of protein/peptide drugs. However, exhaustive clinical trials must be studied before introducing this system in the market.