Depression is a common mental disorder affecting approximately 17 % of the world population. Current therapeutic options are suboptimal due to a lower efficacy and high rates of side effects. Traditional Chinese medicine such as Radix Polygalae has been applied to depressed patients with encouraging outcomes. The main ingredient extracted from Radix Polygalae is onjisaponin B. The aim of this study was to investigate the therapeutic effects of onjisaponin B in experimental depression in mice. 30 male C57/Bl6 mice aged between 6 and 8 w old (25-30 g upon arrival) were purchased from Animal Centre of Shanghai Branch, Chinese Academy of Sciences (Shanghai, China) in this study and inducted to depression mice model. Tail suspension test, forced swimming test, measurement of monoamines and monoamine oxidase methods were used to detect the function of onjisaponin B in depression mice model. Our data showed that in depression mice model, onjisaponin B attenuates the severity of experimental depression. Onjisaponin B inhibits activity of monoamine oxidase A and increases the abundance of 5-hydroxytryptamine and noradrenaline in the brain. These preclinical results indicated the application of onjisaponin B in depressed mice and provided a new potential treatment strategy for patients with clinical depression.

Depression is devastating mental disorder that affects approximately 17 % of the population worldwide[1,2], which is a heavy burden on those affected and the society as a whole. Depression is usually associated with sleep disorders, eating disorders, anxiety and other disorders[3]. Major depressive disorder (MDD) is characterized as the persistent depressed mood for longer than 2 w or the loss of pleasure or interest in usually enjoyable activities[4], which has a negative influence on the society. Currently, administration of antidepressants, such as serotonin selective reuptake inhibitors (SSRIs), tricyclic antidepressant (TCAs), noradrenaline reuptake inhibitors (NRIs), serotonin and noradrenaline reuptake inhibitors (SNRIs) and monoamine oxidase inhibitors (MAOIs), has been widely applied to depressed patients[5]. However, SSRIs often take weeks even months to perform therapeutic roles with unwanted side effects[6]. Therefore, it is important to develop novel therapeutic options for patients with depression.

The precise pathogenesis of depression has yet to be fully understood, which may include genetic and environmental factors[7]. In addition, monoamine neuromodulators play an important role in the process, as depression caused by monoamine depletion was observed in hypertension patients treated with reserpine in the 1960s[8]. Recently, monoamine neuromodulators have been shown to have three core effects in emotion regulation: Dopamine-reward, Norepinephrine-stress and serotonin-punishment[9,10]. Thus, modulation of monoamines is a major therapeutic means and target. Monoamine oxidase (MAO) is a major enzyme that degrades monoamine transmitters, including 5-hydroxytryptamine (5-HT), noradrenaline (NA, also known as norepinephrine) and dopamine (DA)[10]. MAO is located at the mitochondrial outer membrane, which has two isotypes: MAO-A and MAO-B[11]. MAO-A oxidizes serotonin or 5-HT as well as NA, whereas MAO-B degrades β-phenylethylamine[12].

The ethics committee of Ningbo College of Health and Science, Ningbo, Zhejiang Province, China approved and supervised this animal protocol in line with the National Institutes of Health (NIH) guide for the care and use of laboratory animals. Male C57/Bl6 mice, aged between 6 and 8 w old (25-30 g upon arrival) were purchased from controlled specific pathogen-free environment, with fixed temperature (23°), humidity (55 %) and Animal Centre of Shanghai Branch, Chinese Academy of Sciences (Shanghai, China). Mice were kept in a 12 h cycles of light/dark. Mice were allowed to have water and standard lab chow ad libitum.

Reserpine (purchased from Sigma-Aldrich, St Louis, MO, USA) was dissolved in the vehicle (phosphatebuffered saline (PBS) containing 0.1 % dimethyl sulfoxide (DMSO) and 0.3 % Tween-80) to a final concentration of 1 mg/kg. Reserpine was administered to mice intraperitoneally with a dose of 1 mg/kg/d for 3 consecutive days, according to a published paper[14].

Onjisaponin B (fig. 1) was dissolved in vehicle (50 % polyethylene glycol-40 (PEG40) in autoclaved doubledistilled water (ddH2O))[15]. Onjisaponin B solution was administered to mice with different dosages via oral gavage once a 14 d for consecutive days. At the end of treatment with onjisaponin B, mice were assessed for the severity of experimental depression. 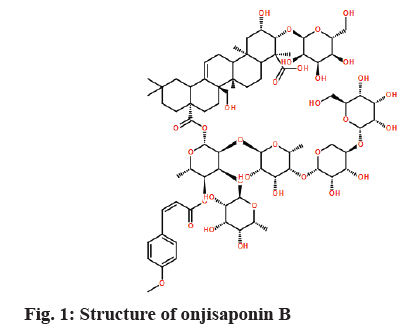 Figure 1: Structure of onjisaponin B

TST is commonly used to measure a medication’s effect in mouse models of depression[2,16]. All tests were performed in an isolated room without any acoustical or visual interference. Mice were suspended 50 cm above the floor with a piece of tape about 1 cm long from the tail tip. The total time of immobility in the last 4 min of the 6 min test period was recorded and analyzed by using software Any-maze (Stoeling Co. Ltd., IL, USA).

FST is also frequently used in assessment of preclinical depression in mice[2,16]. A clear glass jar with a dimension of 20×20×40 cm was used for FST. Water in the jar was set at 30 cm deep with temperature of 22°. A mouse was removed from the cage and place alone in the jar for swimming for 6 min. In the end, the animal was removed from water, dried with paper towels and put back to the cage. Total immobility time was measured during the last 4 min of 6 min swimming time by using software Any-maze.

Mice were sacrificed by cervical dislocation. The brain was rapidly removed and immediately put into liquid nitrogen. The frontal cortex and hippocampus were dissected on an ice-cold petri dish. Tissues were weighted and stored at -80° until assessments.

We tested the amount of 5-HT, NA and DA in the above mentioned brain tissues using high-performance liquid chromatography (HPLC)[17]. Briefly, frozen tissues were homogenized in 200 μl of 0.4 M solution A, (perchloric acid). The sample was placed on ice for 1 h and then centrifuged at 2400 g at 4° for 20 min. The supernatant was collected, 160 μl of which was added to 80 μl solution B, 0.2 M potassium citrate, 0.3 M dipotassium hydrogen phosphate and 0.2 M ethylenediaminetetraacetic acid (EDTA)). A total of 20 μl of solution was injected into an HPLC system (ESA CoulArray, MA, USA). The flow rate was set to 1.0 ml/ min. Levels of monoamine were normalized as ng/g tissue.

MAO activity in frozen whole brain tissue was measured according to previous publications[18,19]. Briefly, frozen brain tissues were suspended in ten volumes of cold sodium phosphate buffer (200 mM, pH=7.4) containing 320 mM sucrose and homogenized. Nucleus and cell debris were removed by centrifugation at 600 g for 10 min at 4°. The fraction containing mitochondria was achieved by centrifugation at 15 000 g for 30 min at 4°. Protein concentration was measured by the Lowry method. The protein concentration of the mitochondrial fraction was diluted to 1 mg/ml. Activity of MAO-A or MAO-B was measured as the ability to catalyze 5-HT or β-phenylethylamine, respectively.

The organic phase of mixtures was collected and the absorbance at 280 nm for MAO-A and 242 nm for MAO-B was recorded. Activity of MAO was normalized as nmol/mg protein/h.

Figure 2: Administration of onjisaponin B increases the duration of immobility of depressed mice in FST Depressed mice were treated with onjisaponin B with different dosages. Time of immobility during FST was recorded. n=12 mice/ group, from one of triplicated experiments. *p<0.05; ***p<0.001; ns: no significance, by one-way ANOVA with Bonferroni post-hoc tests compared to the vehicle group

Figure 3: Administration of onjisaponin B increases the duration of immobility of depressed mice in TST Depressed mice were treated with onjisaponin B with different dosages. Time of immobility during TST was recorded. n=12 mice/ group, from one of triplicated experiments. **p<0.01; ***p<0.001; ****p<0.0001; ns: no significance, by one-way ANOVA with Bonferroni post-hoc tests compared to the vehicle group

Figure 5: Effects of onjisaponin B on monoamines in the frontal cortex Onjisaponin B increases the concentration of 5-HT (Panel A) and NA (Panel B), but has not effects on DA (Panel C). n=10 mice/ group, from one of triplicated experiments. *p<0.05; ***p<0.001; ****p<0.0001; ns: no significance, by one-way ANOVA with Bonferroni post-hoc tests compared to the vehicle group

Figure 6: Effects of onjisaponin B on monoamines in the hippocampus Onjisaponin B increases the concentration of 5-HT (Panel A) and NA (Panel B), but has no effects on DA (Panel C). n=10 mice/ group, from one of triplicated experiments. ***p<0.001; ****p<0.0001; ns: no significance, by one-way ANOVA with Bonferroni post-hoc tests compared to the vehicle group

In this study, we demonstrate that: administration of onjisaponin B attenuates experimental depression in mice measured by immobility time during FST and TST; treatment with onjisaponin B decreases activity of MAO-A, but not MAO-B and supplement of onjisaponin B increases the abundance of 5-HT and NA in the brain tissue.

Traditional Chinese medicinal herbs have been widely used to treat emotion disorders as well as neurological diseases. For a long time, however, the exact ingredient that mediates pharmacological effects in herbs and the precise mechanisms are poorly documented. Radix Polygalae has been used in the formulas that treat depression, although clinical evidence is still warranted for the efficacy and safety (reviewed by Zhao et al.[20]). Onjisaponin B is the major active ingredient extracted from Radix Polygalae. It has given the encouraging results from clinical observations in traditional Chinese medicine, it is worth exploring the effects of onjisaponin B in preclinical models of depression in order to document its mechanisms for the future applications.

Onjisaponin B has been shown to be effective in protection against Parkinson’s disease and other cognitive impairment in rodents[13,15,21], suggesting its effects occur in the central nervous system. For the best of our knowledge, the current paper is the first to show the protective effects of onjisaponin B in mice with depression. These data encourage the further application of onjisaponin B in clinical applications in patients with depression, with support of investigations in mechanisms in the near future.

This work was supported by the Ningbo College of Health & Science. Gao Wen Li and Ling Zhang are contributed equally to this work, Dong Ying Tao and Qun Chen are considered as co-corresponding authors.