Stavudine oral disintegration tablets were formulated to minimize the bitter taste and to reduce the first-pass hepatic metabolism. The various precompression parameters like the angle of repose, bulk density, compressibility index and Hausner's ratio were determined for the powder blend. In this study, 14 formulations of stavudine oral disintegration tablet were prepared by direct compression method. The tablets were evaluated for weight variation, percentage friability, disintegration time, hardness, wetting time and water absorption ratio. The in vitro dissolution study results of the batch S1 (stavudine+crospovidone+sodium starch glycollate) are encouraging as highest dissolution rate (99.2% in 100 min) and lowest time of disintegration (56 s) was achieved. The in vivo drug release studies were carried out in rabbits and the relative bioavailability of formulation S1 was found to be 2.83 times greater than that of conventional tablets.

For the past one decade, there has been an enhanced demand for more patient friendly and compliant dosage forms. As a result, the demand for developing new technologies has been increasing annually. Since the development cost of new drug molecules is very high, efforts are now being made by pharmaceutical companies to focus on the development of new drug dosage forms for existing drugs with improved safety and efficacy together with reduced dosing frequently, and the production of more cost effective dosage forms.

For most therapeutic agents used to produce systemic effects, the oral route is still preferred way of administration, owing to its several advantages and high patient compliance compared to many other routes. Tablets and hard gelatin capsules constitute a major portion of drug delivery systems that are currently available. However, many patient groups such as the elderly, children and patients who are mentally challenged, uncooperative, nauseated, or on reduced liquid intake or diets have difficulty in swallowing these dosage forms [1].

To fulfil these medical needs, pharmaceutical technologists have developed a novel oral dosage form known as orally disintegrating tablets (ODTs), which disintegrate rapidly in saliva, usually in seconds, without the need to take water. Drug dissolution and absorption as well as the onset of clinical effect and drug bioavailability may be significantly greater for ODTs when compared to conventional dosage forms.

Although chewable tablets have been on the market for some time, they are not the same as the new ODTs. Patients for whom chewing is difficult or painful can use these new tablets easily. ODTs can be used easily in children who have lost their primary teeth but do not have full use of their permanent teeth [2].

Recent market studies indicate that more than half of the patient population prefers ODTs to other dosage forms. The US Food and Drug Administration Center for Drug Evaluation and Research (CDER) defines in the ?Orange Book?, that an ODT as a ?solid dosage? form containing medicinal substances, which disintegrates rapidly, usually within a matter of seconds, when placed on the tongue. The significance of these dosage forms highlighted by adoption of term ?orodispersible tablet? by the European Pharmacopoeia which describe, it as a tablet that can be placed in oral cavity where it disperse rapidly before swallowing [3].

ODT products have been developed for numerous indicators ranging from migraines (for which rapid onset of action is important) to mental illness (for which patient compliance is important for treating chronic indications such as depression and schizophrenia). Different taste masking techniques such as polymer coating, complex formation, granulation, microencapsulation, ion exchange resins are used in pharmaceutical industries to overcome the bitter taste of drug. In this work, stavudine oral disintegration tablets were formulated to minimize the bitter taste and to reduce the first-pass hepatic metabolism [4-6]. The prepared tablets come under the category of fast dispersible, slow releasing tablets [7].

Loose bulk density (LBD) and tapped bulk density (TBD) of stavudine and the powder blends were determined using bulk density apparatus (Electrolab, India). Stavudine was passed through 18# sieve to break the clumps, if any. Accurately weighed 5 g of the drug was placed in a 100 ml graduated measuring cylinder. Initial volume was observed. The cylinder was tapped initially 200 times from a distance of 14±2 mm. The tapped volume (Va) was measured to the nearest graduated unit. The tapping was repeated additional 200 times. Again, the tapped volume was measured to the nearest graduated unit. The same thing was done for powder blends [8]. The LBD and TBD were calculated in g/ml using the formulae, LBD=Weight of the powder/volume of the packing and TBD=Weight of the powder/tapped volume of the packing.

Stavudine tablets (30 mg) were prepared using different ratios of superdisintegrants by direct compression. The superdisintegrants such as sodium starch glycolate and crospovidone were used in different proportions. All the ingredients were passed through 40# sieve and were subjected for drying to remove the moisture content at 40-45°. Weighed amount of drug and excipients except talc were mixed in a polybag for 20 min manually. The mixed blend of drug and the excipients was compressed on Rimek 10 station rotary punching machine using 8 mm diameter flat faced punches [9]. Ingredients for the stavudine tablet formulations S1-S14 are given in Table 1.

The thickness of tablets was measured using Vernier calipers. Six tablets from each batch were selected and evaluated. The extent to which the thickness of each tablet deviated from ±5% of the standard value was determined.

Hardness (diametric crushing strength) is a force required to break a tablet across the diameter. The hardness of a tablet is an indication of its strength. The tablet should be stable to mechanical stress during handling and transportation. The degree of hardness varies with the different manufactures and with the different types of tablets. The hardness was tested using Pfizer hardness tester. Ten tablets from each batch were tested and the average of ten values was found. The force was measured in kilograms per centimetre square [12].

The disintegration time of the tablet was measured by using disintegration apparatus. Water is used as buffer and the temperature maintained is 37° [13].

Two circular tissue papers of 10 cm diameter are placed in a petridish having the same inner diameter. 10 ml of phosphate buffer solution, 6.8 pH containing water is added to petridish. A tablet is carefully placed on the surface of the tissue paper so that complete tablet was not immersed in the solution. Then, the time required for buffer to reach an upper surface of the tablet is noted as wetting time [15]. Wetting time test was performed on three tablets of each batch, the average was taken as wetting time.

Two groups of rabbit were taken for the study. Each group consists of three animals. To the first group 2.1 mg of conventional stavudine tablets and to the second group stavudine oral disintegration tablet were given orally. Blood was collected from the marginal ear vein of the rabbit after 30, 60, 90 and 120 min. Before collecting blood 50 μl of 15% sodium citrate was added to the eppendorf tubes as an anticoagulant. Then it is centrifuged at 2000 rpm for 10 min to separate the plasma [17]. The drug concentration in the plasma was determined by high performance liquid chromatography (HPLC) at 266 nm. The relative bioavailability was determined using the formula: F=(AUCtest×Dstd)/(AUCstd×Dtest), where, AUC is the area under the curve of plasma profile and D is the dose given.

Plasma concentrations of stavudine were determined following the HPLC procedure as described previously [18]. The mobile phase consisted of methanol:distilled water:acetic acid in 23:77:0.2 (v/v) ratio and was delivered to the system at a flow rate of 1 ml/min. The column used for the study was a reverse phase column (Waters, Sunfire C18, 5μ, 4.6×250 mm). The detector was a 2489 UV/Vis detector and the detection wavelength was 266 nm. The calibration curve showed excellent linearity over the concentration range of 5-30 μg/ml. The correlation coefficient (r) and the determination coefficient (r2) of the curve were 0.999 and 0.997, respectively. All intra- and inter-day coefficients of variation (CV) were less than 10%.

A total of 14 formulations of oral disintegrating tablets of stavudine were prepared by direct compression method using superdisintegrants such as sodium starch glycolate and crospovidone in different ratios. During preparation, the lubricating agent and sweetening agent were kept constant to avoid any possible influence by these ingredients. Saccharin sodium which is 450 times sweeter than sucrose was included in all the formulations within the permissible limit (0.5 mg/kg) to mask the bitter taste which may be helpful for increasing the patient compliance.

Weight variation test was performed as per Indian Pharmacopoea 2007 (IP); the test ensured that the fill in the die cavity was uniform for all the batches. Any variation in the weight of tablet (for any reason) leads to either under medication or over medication. So, every tablet in each batch should have a uniform weight. Deviation within the IP permissible limit of 7.5% is allowed. Corrections were made during the compression of tablets to get uniform weight. The percent deviation calculated was less than 7.5% of the average weight of the tablet. Hence, all batches comply with the test for weight variation as per IP (Table 3). The average thickness of tablets which were measured using Vernier callipers was recorded as 0.3±0.05. The friability of all the batches except S6, S9 and S12 formulations was found to be less than 1% ranging from 0.442 to 0.937%, thereby all the batches were found to pass the test for friability of tablets as per IP (Table 3). The hardness of all batches was found to be in range of 3.1-4.3 kg/ cm2, and it was kept constant in this range during compression (Table 3). 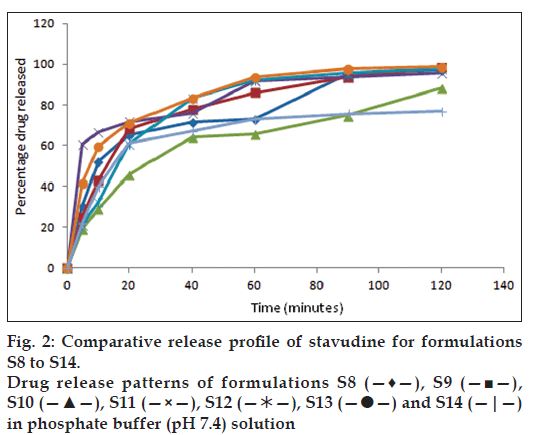 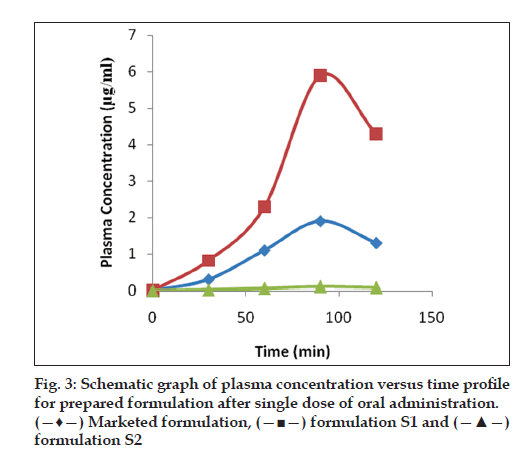