Out-patients Prescriptions are Safe from Drug Interactions or Not: A Pilot Study Report

Drug-drug interactions (DDIs) are a concern for patients and providers, as multiple medication use is becoming more common to manage complex diseases. The consequences of DDIs can range from no untoward effects to drug-related morbidity and mortality. Although DDIs are considered preventable medication-related problems [1,2]. Research has also shown that DDIs are associated with increased health care use [3,4].

The significance and appropriate management of DDIs is a continuously evolving issue for providers. Research using prescription databases can contribute to greater understanding of clinically important potential DDIs; however, only a few studies have examined clinically important DDIs in the outpatient setting, and even fewer studies have identified patients at risk for such DDIs [6-10]. Despite outpatients receiving drug pairs with a high potential for adverse interactions, the rate of occurrence of clinical drug interaction events was low [11]. The relative importance of drug interactions as a clinical problem remains unclear. Screening programs that do more than simply identify large numbers of patients who receive potentially interacting drug combinations without indicating which subpopulations of these individuals are likely to be harmed by the drugs have not yet been developed [12].

The study was done in three pharmacies within a 200 meter distance of each other. The doctors were from general practices located near these pharmacies. The doctors involved were made aware of the study but data were collected without their knowledge. All 500 prescriptions are collected during the five-month study period. 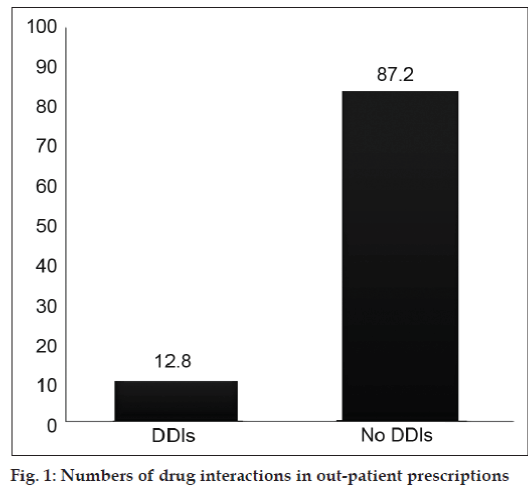 Authors are thankful to all the doctors of the hospital, out patient’s clinical practice, pharmacy directors, and pharmacy in-chargers to carry out this study.