In order to study the effect of changes in TRPC6 protein pathway on podocyte injury in hypertensive mice, 20 WT mice were randomly divided into the control group and the experimental group. Acute hypertension model was established by ligating abdominal aorta for 15 min in the experimental group mice. After successful establishment of the mouse model, in vivo freezing technology is used in all mice to prepare tissue samples for the experiment. H and E staining, SABC-DAB immunohistochemical staining, Western blot and calcium ion detections were made on kidney tissue samples of mice. Urine samples of mice were collected to test urinary albumin. The results showed that compared to the control group, the glomerular tubules and Bowman capsules in the experimental group were swollen, the expression of TRPC6 channels in podocytes increased, the concentration of calcium increased sharply and the concentration of albumin in urine also increased sharply. These results showed that hypertension could cause opening of TRPC6 channel to increase the calcium ion concentration leading to podocyte damage. The ability of damaged podocytes to deal with albumin is weakened and a large increase of albumin would cause further increase of Ca2+ concentration, that aggravated damage to podocytes this initiated a vicious circle. This study thus laid a foundation for exploring the mechanism of podocyte injury caused by hypertensions

Therefore, in order to prevent the occurrence of the disease or delay the deterioration to reduce damage after the eventual inevitable illness, it is necessary to explore the relationship between podocyte injury and chronic kidney disease as much as possible, such as exploring the possible pathogenesis[6,7]. Podocytes play a very important role in glomerular filtration function. They form a filtration barrier and maintain the normal operation of renal function[8-10]. Podocytes are arranged along the lateral side of the glomerular basement membrane, hence are also called glomerular visceral epithelial cells[11]. Podocytes have a variety of functions and structures, but there is a transmembrane complex between adjacent podocytes, which is a molecular and charge barrier. Its function is to prevent the leakage of plasma proteins. At the same time, it acts as an important signal transduction platform in the podocytes[12,13]. TRP family are channel proteins, which are non-selective, receptor-gated cationic proteins. The expression of TRPC6 has been found in podocytes[14]. Under certain conditions, especially when stimulated by external stimuli, TRPC6 in podocytes get activated leading to calcium ions entering or releasing from endoplasmic reticulum, and ultimately leading to podocyte damage[15]. TRPC6 channel plays an important role in regulating calcium signaling. The increase in intracellular Ca2+ regulated by TRPC6 is an important cause of podocyte injury[16]. Abnormal expression of TRPC6 is often found in podocyte injury. It was reported that focal segmental glomerulosclerosis (FSGS) often inherited by families could result from mutation of TRPC6. In acquired glomerulopathy, TRPC6 expression is abnormal, leading to Ca2+ influx, which then leads to activation of downstream signalling, rearrangement of podocyte skeleton and apoptosis of podocytes, leading to proteinuria[17-19]. Calcium influx can eventually lead to structural damage and dysfunction of podocytes. Based recent scientific advances, mitochondria have been found to play an increasingly important role in hypertension. In some cases, the changes of mitochondrial structure, especially the changes of mitochondrial DNA, are highly synchronous with the onset of hypertension[20]. Mitochondria are the main energy processing plants of human body, which provide more than 90% of the energy for the body. At the same time, they produce a large number of oxygen free radicals, induce apoptosis, and are related to a variety of cardiovascular diseases. It is suspected that TRPC6 regulates the increase of intracellular Ca2+ induced by acute hypertension, which leads to the overload of mitochondrial Ca2+ in podocytes, and then leads to the disintegration of mitochondria and apoptosis of podocytes[21]. In this study, in vivo freezing technology was used to better achieve the experimental objectives and obtain more accurate results. In vivo freezing technology is a rapid freezing technology for living organisms. The freezing rate of the technique is very fast and the tissue sample can be rapidly frozen to -193º. In vivo freezing technology maintains the stable state and structural characteristics of TRPC6 in mouse glomerular podocytes. Real-time changes of TRPC6 protein in podocytes are obtained by using immunohistochemistry, immunofluorescence and Western blotting techniques. The changes of mitochondrial number and morphology in acute hypertension are observed under transmission electron microscopy so as to study the effects of hypertension on podocyte damage in mice.

Twenty healthy male wild (WT) mice weighing between 23-33 g, aged 6-8 w, were purchased from the Beijing Weitong Lihua Laboratory Animal Technology Co., Ltd., China. Feeding temperature was maintained at 20-26°. The mice were allowed free access to feed and water. Mice were randomly divided into 2 groups, 10 mice in each group. One group is the normal control group and the other group is the acute hypertension group (experimental group).

Establishment of an animal model of after anesthesia, the mice in the experimental group were placed on the anatomical plate in a supine position. The limbs were fully extended and fixed and the body was symmetrical. The skin was disinfected with alcohol, the skin and peritoneum were cut along the white line of the abdomen from the top of the pubic bone to the bottom of the sternum. The two ends of the incision were cut along the left and right directions to the ventral wall. The abdominal wall was reversed to the left and right sides, fully exposing the abdominal cavity. Intestines were gently pushed to the right with a small piece of absorbent paper to reveal the posterior abdominal wall. The adipose tissue behind the peritoneum is removed, to expose the abdominal aorta and main abdominal vein. The abdominal aorta was ligated for 15 min to establish the development of a hypertensive mouse model. 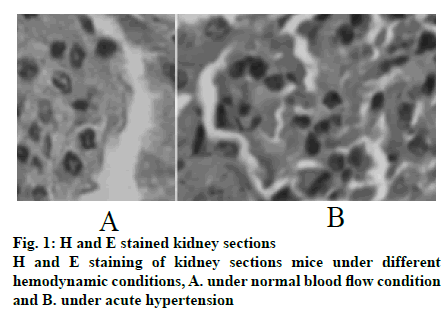