Possible use of psyllium husk as a release retardant

Various hydrophilic polymers from synthetic origin such as methylcellulose, PEGs, HPMC as well as those from natural world such as guar gum, tragacanth, xanthan gum have been used to formulate oral sustained release formulations. Psyllium husk has the ability to swell 10-14 times of its original volume and form a hydrogel. It is biocompatible, inexpensive, inert, non-absorbable, environment friendly and easily available. However, its use as a release retardant has not been fully explored. Owing to large dose, high sensitivity to light, moisture and heat and also very short half-life of 1-2 h; formulation of sustained release dosage form of amoxicillin trihydrate is a challenge. Hence the present study has been undertaken to develop sustained release granules as well as matrix tablets of amoxicillin trihydrate using psyllium husk as a primary release retardant. The drug release of these formulations was compared with those containing HPMC K4M.The results showed insignificant difference in t80% value for drug release as assessed by student's t-test at 5% level of significance. Selected formulations were kept at controlled conditions of 40o/75% RH and 30o/65% RH for a period of 3 mo. Microbiological assay was used as a stability indicating method of assay. Sustained release granules and tablet formulations containing HPMC alone were found to be more stable than the similar formulations containing husk with percent drug content at the end of 3 mo at 40o/ 75% RH being 92.66%, 93.81%, 86.74%, 88.31% and the rate of degradation being 8.46×10-4 d-1, 7.1×10-4 d-1, 1.58×10-3 d-1 and 1.38×10-3 d-1, respectively. Thus it was concluded that psyllium husk can be effectively used as a hydrogel polymer in sustained release formulations. However, there is a need to keep moisture level under control during and after formulation.

Amoxicillin trihydrate is a widely prescribed broad-spectrum antibiotic, available in conventional dosage forms for peroral delivery. The conventional formulations such as capsules, tablets, suspensions produce a large plasma peak of drug about 2 h after administration, which rapidly declines to below the minimum inhibitory concentration (MIC) of most pathogenic microorganisms, before the administration of subsequent doses of 250-500 mg at 8 h intervals [1]. It has often been claimed without clinical substantiation that this pulsed pattern of administration is more effective than sustained delivery of therapeutic concentration of active, as it may encourage outgrowth of resistant organisms when antibiotic levels become sub-therapeutic [2]. However, this suggestion is at variance with practice of giving the antibiotic as its sodium salt by slow intravenous infusion when treating severe infections and by the increasing use of orally active cephalosporin and tetracycline antibiotics with once- or twice-a-day dosage regimen. Also, it has been shown in vitro that β-lactam antibiotics differ from aminoglycosides in that their antibacterial effect was less concentration dependent, but was more related to the duration of active antibiotic level [3]. Attempts to develop a sustained release dosage form of amoxicillin have been hindered by its dose size, short biological half-life of 1-2 h, high sensitivity to light, moisture and heat.

In recent years, water-swellable polymers have attracted considerable attention in the field of drug delivery systems. The swellable, hydrophilic polymers such as polyvinylalcohol, hydroxypropylcellulose, methylcellulose and hydroxypropylmethylcellulose (HPMC) are quite popular in designing of controlled drug delivery dosage forms with HPMC being the most widely used among all [4]. However, these semi-synthetic polymers are relatively expensive.

The work has been carried out for the use of natural materials such as guar gum, alginates, xanthan gum, tragacanth as release retardants in sustained release dosage forms5. Psyllium husk, dried seed coats of Plantago ovata, is biocompatible, inexpensive, inert, non-absorbable, environment friendly and easily available. It is official in IP, BP and USP. It is used in food and pharmaceuticals at a dose level of 5-7 g, twice-a-day [6]. Psyllium husk has the ability to swell 10-14 times [7] of its original volume and form a hydrogel. However, its use as a release retardant is not fully explored by the researchers and hence the present study was undertaken to develop sustained release dosage formulations of amoxicillin trihydrate using psyllium husk.

The drugs as well as husk (powdered and passed through sieve no: 36) were standardized as per pharmacopeial methods and the micromeretic studies were carried out [8,9]. Also, pH solubility profile of the drug was studied. Microbiological assay was performed by diffusion method for the strains of E. coli 113D and S. aureus 6538 to study the antibacterial activity of the drug [10].

Preparation of sustained release granules to be filled in capsules

The sustained release granules containing the drug, psyllium husk, HPMC K4M, methylparaben and propylparaben were prepared using 2% HPMC K4M slurry in 70% alcohol as binder. The mixture of air-dried granules (18/36 #) and the compacted drug (18/36 #) as a loading dose was lubricated with aerosil (0.5%) and magnesium stearate (1%) and filled in the capsules. Also, the granules using only HPMC K4M as a release retardant were prepared.

For both granules as well as tablets, a Veego USP dissolution tester type II was used. Tablets as well as granules were evaluated in the dissolution medium 0.1 N HCl, pH 1.2 (900 ml, 37o, n=3) for first two hours and in phosphate buffer pH 6.8 (900 ml, 37o, n=3) for rest of the six hours at 100 rpm. The samples were withdrawn at predetermined time intervals and the absorbance was measured at 272 nm using Shimadzu UV 1608 spectrophotometer. Concentration of the drug was calculated by reference to a linear calibration curve constructed at the respective pH. Effect of pH on drug release was also studied by carrying out dissolution study in various buffers at pH 2, 4, 6 and 8.

Selected formulations were kept at controlled conditions of 40°/75% RH and 30o/65% RH for stability studies for 3 mo. The parameters viz. physical appearance, drug release profile, loss or gain in weight and percent drug content were studied at the suitable intervals. Microbiological assay was used as a stability indicating method of assay. 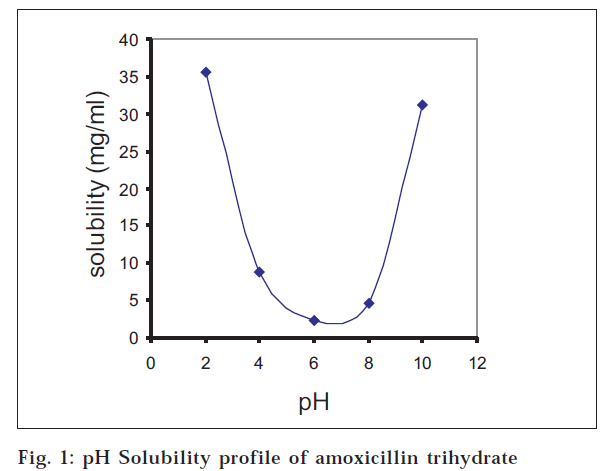 Various formulations of sustained release granules were prepared as per the formulae given in Table 1. As seen from fig. 2, formulations G4 and G6 were found to show most satisfactory release profile with 100% release over 6.5 to 7 h. Formulation G4 containing husk and around half the quantity of HPMC K4M of formulation G6 gave almost similar t80% value as G6 at 5% significance level as assessed by student’s t-test. Also, it was observed that for a multiparticulate system there was a need to use husk in combination with another hydrophilic polymer like HPMC to reduce its immediate swelling on interaction with the surrounding fluid and to make the granules heavier. The granules of formulation G4 were found to be satisfactory with the bulk density of 0.5 g/ml, angle of repose 6.85°, flow rate 2 g/sec, loss on drying (60o) 4.43% and 98.36% drug content. During in vitro dissolution studies, it was observed that multiparticulate formulations of husk as well as of HPMC showed incomplete aggregation i.e. particles came together to form small groups while still maintaining the multiparticulate system. Drug release profile of the multiparticulate system showed almost complete drug release as compared to the tablet formulations as seen from figs. 2 and 3.

,G2 is granules of husk with drug, total polymer ratio of 1:1

, G3 is granules of husk and HPMC with drug, total polymer ratio of 1:1

, F3 is tablets of husk and HPMC with drug, total polymer ratio of 1:0.5, DCP 100 mg per unit, starch included extragranularly

Various matrix tablets formulations from F1 to F4 were prepared as per Table 2 with drug:polymer ratio of 1:0.5 and evaluated for the physicochemical characters and drug release profile. As seen from fig. 3, formulation F2 was found to show lesser drug release than F1 due to higher amount of calcium phosphate dibasic which increased the hardness and reduced the swelling of the matrix. To wwwincrease the drug release without compromising the hardness, starch was added extra granularly in formulation F3 that produced higher drug release than F2. To increase drug release further, HPMC K4M was eliminated from the polymer composition and starch was incorporated intragranularly as well and the resultant formulation (F4) was found to be most satisfactory with hardness of 4 kg/ cm2, friability of 0.78%, swelling index of 3.2, drug content of 97.93% and drug release of 85% over 8 h. Also, this formulation was comparable with F5 having HPMC alone in the drug:polymer ratio of 1:1 with respect to t80% value of drug release as calculated by student’s t-test at 5% level of significance. Thus it was found that husk alone can be effectively used as release retardant in the tablet formulation unlike multiparticulate system, which might be because of the compression force of the tablet that binds the husk firmly.

The drug release profiles of the successful granules (G4) and tablet (F4) formulations were studied at different pH values. Figs 4 and 5 showed that the release was higher at low pH, which was in accordance with the data reported [12] .

and effect of pH on drug release from sustained release matrix tablets, formulation F4 at pH 8 (-×-)

The authors are grateful to Cipla Pvt. Ltd., Abbott India Ltd. and Glenmark Pharmaceuticals for providing gift samples of the drug and excipients.