The present study was aimed to analyze the postoperative curative effect of combined chemotherapy with docetaxel and nedaplatin in advanced gastric carcinoma. In this study, 160 patients with advanced gastric carcinoma were enrolled as study subjects. They underwent radical gastrectomy and were randomly divided into the study group and the control group, each containing 80 patients. The control group was treated with oxaliplatin, leucovorin and 5-fluorouracil combined chemotherapy. The study group was treated with docetaxel, nedaplatin combined chemotherapy. There was no significant difference in short-term treatment efficiency between the two groups. In terms of 1-year survival rate and 3-year survival rate, the study group was better than the control group, p<0.05. There was no significant different in rate of adverse reactions between the two groups. The study group showed better quality of life relative to the control group. For treatment of advanced gastric carcinoma, docetaxel-nedaplatin combination could achieve relatively satisfactory long-term efficacy 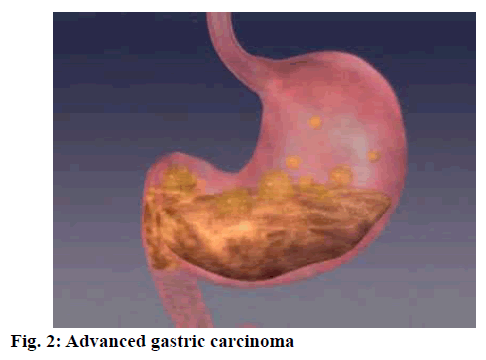 In this investigation, 160 patients who had been treated for advanced gastric carcinoma at the First Affiliated Hospital of Jiamusi University from January 2013 to December 2017 were enrolled, all of whom were treated with combined chemotherapy after surgery. The inclusion and exclusion criteria for patients were, meeting the diagnostic criteria for advanced gastric carcinoma (Figure. 3) stipulated in the 8th edition of Surgery [6] and confirmed by X-ray barium meal, fiberoptic gastroscopy as advanced gastric carcinoma; tumor, node and metastasis staging from stage III to IV; with objectively measurable lesions and an estimated survival time of more than 3 mo; patients and their relatives had the right to information and signed formal informed consent developed by the institution; no complication of severe liver, kidney, heart and bone marrow dysfunction, no other malignant tumors; no history of chemotherapy nor poor compliance. There was no significant difference in short-term treatment efficacy between the 2 groups. However, the 1-y and 3-y survival rates of the study group were significantly greater than those of the control group, p<0.05, as shown in Table 1. As shown in Table 2, there was no significant difference in rate of adverse reactions between the two groups. The quality of life scores for the study group were significantly higher as compared to the control group, p<0.05 (Table 3).

Table 3: Comparison of quality of life.

Docetaxel is a semi-synthetic taxane analogue with activity more than double that of taxol. With the continuous development of medical technology, docetaxel-based combination chemotherapy regimen has been widely applied in the treatment of advanced gastric carcinoma with remarkable success. Plus its characteristics of higher tolerance, docetaxel was approved by the FDA as the first-line therapy for gastric carcinoma in 2006. Nedaplatin represents a third-generation organoplatinum antitumor drug with solubility 10 times greater than that of cisplatin. Many clinical studies have shown no full cross-resistance between nedaplatin and other platinum drugs. Moreover, nedaplatin can react with nucleosides to produce nucleoside-platinum conjugates that ultimately inhibit replication of tumor DNA.

The results of this study shown similar short-term efficacy of combined docetaxel and nedaplatin chemotherapy and oxaliplatin, 5-fluorouracil, and leucovorin combined chemotherapy. However, the former’s long-term efficacy is relatively better with no serious adverse reactions produced and higher quality of life is obtained. Hence, the combination could be used as a postoperative chemotherapy regimen for advanced gastric carcinoma.

In summary, docetaxel and nedaplatin combined chemotherapy could produce good results, with better longer-term efficacy for patients with advanced gastric carcinoma. Moreover, patients can tolerate toxic reactions and receive good quality of life. Therefore, such chemotherapy initiative should be popularized.