Aging patients with diabetes are at higher risk of developing Alzheimer's disease. Emerging evidences demonstrate the role of brain insulin resistance, which is a key mediator in prediabetes and diabetes mellitus that may lead to Alzheimer's disease. Insulin and insulin-like growth factors regulate many biological processes such as axonal growth, protein synthesis, cell growth, gene expression, proliferation, differentiation, and development. Among these, the energy metabolism and synaptic plasticity are the major transduction processes regulated by insulin, which are the core objectives for learning and memory. It was also proposed that hyper insulinemia induced insulin resistance results in injury to the central nervous system by the activation of glycogen synthase kinase 3β which is the key ailment in the cognitive decline. Hence, the endogenous brain specific insulin impairments and signaling account for the majority of Alzheimer's abnormalities.

As the human population is aging, the incidence of neurodegenerative diseases are also increasing. One such pathological disorder is Alzheimers Disease (AD) which affects the elderly population. As the average life expectancy increases, the number of AD patients are projected to increase by 27% by 2020, 70% by 2030, and nearly 300% by 2050 [1], unless there are better treatments for the reduction in progress of the disease.

Type 2 diabetes (T2D) also affects elderly, 25% of the population (60 y and above) had type 2 diabetes in 2007. If prediabetes is considered the prevalence is over 50% in persons of 60 y and above [2]. Epidemiological, cell biology and animal model evidences suggest the significant link between AD and diabetes. Many epidemiological evidences have also shown that prediabetes and diabetes are related to higher risk of dementia [3]. It was also evidenced that patients with T2D have a two to three‑fold increased risk for AD, referring to AD as “brain‑type diabetes” [4]. Findings from the prospective population based studies, meta‑analysis have shown an increased risk of cognitive impairment in people with diabetes [5,6]. More interest has been dedicated in the recent years to the effect of diabetes on brain, as it is found to be implicated in neurological complications. The high prevalence of T2D, prediabetes and its related conditions, their association with AD may have enormous impact on the public. In this review we would summarize the current brief understanding of correlation between prediabetes and AD.

Prediabetes and the risk of late onset AD

Diabetes milletus is mainly associated with insulin resistance or decreased insulin sensitivity. Diabetics on long run found to have specific cognitive deficits characterized by decreased execution [7,8], processing speed [9], verbal and non‑verbal memory [9,10] along with vascular depression where it severely impairs attention. Generally cognitive impairment occurs either in early stages of life during development of the nervous system or in late stages of life i.e.; in brain neurodegeneration (aging) [11]. The key organs of memory and emotions, hippocampus and amygdala were found to be atrophied in diabetes mellitus, which was very similar to the atrophy in AD [12]. Diabetes milletus may accelerate brain aging there by reducing the cognitive reserve and threshold development of AD symptoms; it may also interfere with amyloid and tau metabolism [13]. In a recent meta‑analysis study of “type 2 diabetes and dementia risk”, it was found that diabetics confer a relative risk of 1.46 for AD [6]. Researches suggest the risk of cognitive decline and neurodegeneration in prediabetes [14].

The term ‘prediabetes’ is a condition where the body tissues are exposed to abnormally high levels of insulin for extended periods, that may persist for many years. Insulin resistance develops gradually, even though enough insulin is still produced to overt diabetes, but results in impaired fasting glucose and/or impaired glucose tolerance [14,15]. Insulin resistance seems to increase Advanced Glycation End‑products (AGE), consequently oxidative stress by the formation of reactive oxygen species (ROS) by accelerating the aging process [16]. The resultant oxidative stress leads to increased damage of DNA, mitochondrial dysfunction, reduced ATP production. Impairment of brain insulin signaling appears to be the core of neurodegeneration cascade in late onset of AD [17,18] so the common link between prediabetes and late onset of AD is insulin resistance, which causes hyperinsulinemia [19]. Insulin, insulin‑like growth factors modulate the vital functions including survival and growth of neurons, gene expression, protein synthesis, myelin production and maintenance in oligodendrocytes, synapse formation and plasticity [20,21]. Consequently impaired signaling or resistance adversely affects a wide range of neuronal and glial functions.

Even though brain constitutes 2% of the body weight, it consumes almost 25% of glucose [22], so the glucose metabolism is vital to the brain. Therefore disruptions in the glucose supply, transport or utilization results in neuronal damage and functional deficits. Hypoglycemia and hyperinsulinemia are accompanied by neuronal death and excitotoxicity in the developing brain, chronic hypoglycemia can lead to permanent brain damage [23] while hyperinsulinemia results in various functional decline in CNS [24,25]. Insulin resistance is a critical feature of diabetes and that may be detected years before the clinical onset of hyperglycemia [26,27]. Insulin resistance is due to reduced ability of insulin receptor to respond to insulin stimulation [28]. During this condition pancreatic beta cells secrete higher levels of insulin to compensate for the declined function of receptors resulting in hyperinsulinemia [29]. Insulin receptors are present throughout the brain, abundantly in the olfactory bulb, cerebral cortex, hippocampus, hypothalamus and the amygdala. The highest concentration of insulin receptor mRNA expression was found in the choroid plexus and cerebellum [30]. Binding of insulin to its receptor substrate activates the tyrosine kinase activity, leading to autophosphorylation of tyrosine residues, which initiates intracellular cascade [30,31]. This insulin mediated signal transduction controls the activity of many enzymes, including p85 regulatory subunit of phosphatidylinositol‑3‑kinase (PI3‑K) [32], this enzyme stimulates glucose transport [33] and inhibits apoptosis by activating Protein kinase‑B (Akt/PKB), which acts on glycogen synthase kinase‑3 (GSK‑3) [34], This GSK‑3 becomes inactive upon phosphorylation by Akt, thereby dephosphorylating glycogen synthase (active form), this enzyme increases the rate of conversion of glucose 6‑phosphate to glycogen [35] (fig. 1). 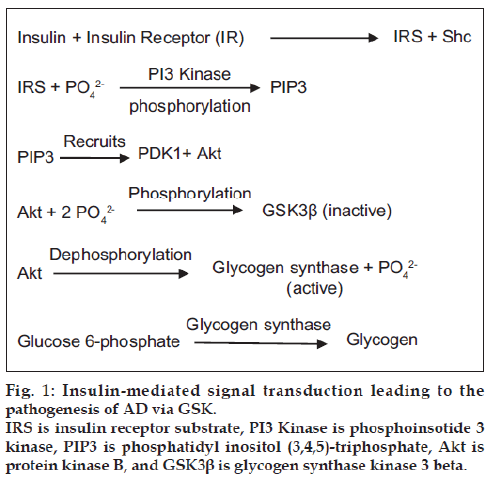 Although neurons are non‑insulin dependent but they are insulin responsive [36]. Insulin receptors are widely expressed in the brain as stated above. These receptors are more concentrated in the neurons, especially in the post‑synaptic regions [37]. Brain insulin signaling plays a key role not only in the regulation of food intake, body weight and reproduction but also in the learning and memory [38]. Defective insulin signaling or insulin resistance results in decreased cognitive ability and development of AD [39].

One of the key signaling molecule responsible for the pathogenesis of AD was GSK3, a multifunctional serine/threonine kinase. The activity of this signaling molecule is enhanced in impaired insulin signaling or insulin resistance, most commonly seen in prediabetics. Insulin and insulin like growth factors after a cascade of reactions generate the Akt which regulates the glucose and energy metabolism in normal physiological conditions, the GSK 3 upon activation produces two homologous isoforms GSK3 α and GSK3 β. The former one is implicated in amyloid precursor protein/amyloid β regulation, while the later one in Tau regulation. Increased GSK3 α activity was found to enhance the deposition of amyloid β extracellularly in the brain regions [40,41], mainly in the hippocampus as the activity of the GSK [42] was found to be more here, which is one of the major pathological hallmarks in AD, the amyloid β deposits impair synaptic functions and also promotes gliosis leading to cognitive decline and neuronal death.

Insulin resistance also promotes rise in the activity of GSK3 β [43] which promotes the hyperphosphorylation of the microtubule associated protein tau, thereby forming neurofibrillary tangles intracellularly which may induce oxidative stress leading to the excitotoxicity, synaptic dysfunction which leads to cognitive decline (fig. 2). 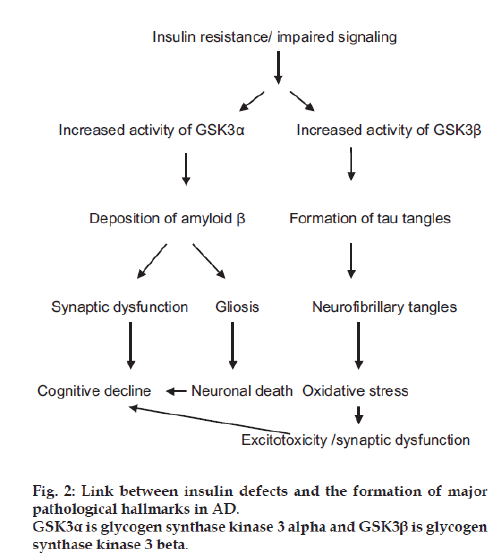 Insulin resistance is the main pathogenic feature of metabolic syndromes like diabetes, hypertension, dyslipidemia, and obesity. The study of insulin resistance was mainly focused on metabolic tissues until yesterday. Evidences from researchers now indicate that insulin resistance also affects the nervous system. Studies revealed increased risk of AD in diabetes, as it makes neurons more vulnerable to amyloid and tau toxicity. The Akt signaling is the crucial and common feature in normal functioning of the cell, where it’s signaling seems to be highly decreased in insulin resistance. Insulin resistance is commonly observed in prediabetes also, where there is a major risk of developing diabetes. Screening and prophylaxis of prediabetics appears to be necessary in order to overcome the fore coming disorders like diabetes and AD. Literature clearly reveals the presence of insulin receptor mRNA in the choroid plexus, where the cerebrospinal fluid is being synthesized. So, a better biomarker can be obtained by further research, such that the progress of prediabetes can be reduced and studies will be needed to understand the contribution of hyperinsulinemia in developing AD. Further research is required to establish the molecular mechanism and signal transduction pathways common to both prediabetes and AD, for developing new therapeutic targets.