In the past decade, the treatment of renal cell carcinoma (RCC) has improved considerably with several new agents have been approved, including tyrosine kinase inhibitors and checkpoint inhibitors[1-4]. They have been shown to improve survival and quality of life in the metastatic setting, nevertheless, the 5 y overall survival rate is still disappointing. Detecting and treating the tumor in the early stage is the most promising way to a cure. In localized RCC, surgery is the main modality by either partial or radical nephrectomy. Studies addressing the role of adjuvant tyrosine kinase inhibitors after surgery have shown conflicting results[5-7], thus potential markers for prognosis in resected RCC patients are warranted.

Carcinogenesis and tumor progression is linked to a tumor-associated inflammatory response[8]. Even in early-stage tumors, there is evidence of both local and systemic inflammation; including immune cell infiltration in the stroma, changes in peripheral blood cells, and alteration of inflammatory cytokines[9]. Neutrophil lymphocyte ratio (NLR) has been studied in many types of advanced cancer[10-12] and has also gained the prognostic value in primarily operable tumors such as breast, colon and gastric cancer[13]. For localized RCC, there are only a few reports regarding the role of NLR as a prognostic factor. The aim of this research was to determine the prognostic role of NLR for survival in nonmetastatic RCC undergoing nephrectomy.

This retrospective cohort study was approved by the Khon Kaen University Faculty of Medicine Ethics Committee as instituted as per the Declaration of Helsinki (Number HE621159). All patients who underwent nephrectomy at Srinagarind Hospital, a large referral university hospital, between 1 January 2007 and 31 December 2017 were included. All patients were 18 y old or over and were diagnosed with RCC. Patients with distant organ metastasis were excluded. No patients received neoadjuvant and adjuvant treatment including targeted therapy, chemotherapy, or radiotherapy. Preoperative laboratory values were measured from peripheral blood samples. Anemia was defined according to WHO criteria[14]; hemoglobin <13.0 g/dl in males and <12.0 g/dl in females. NLR was calculated by dividing the absolute neutrophil count by the absolute lymphocyte count. Baseline and clinical characteristics were analyzed using descriptive statistics. Chi-square was used for categorical data. Receiver operating characteristic (ROC) analysis was constructed to assess the cut-off value of NLR. Date of diagnosis and date of death or last follow-up were collected from medical records. Overall survival (OS) was defined as a survival time from the date of renal cell carcinoma diagnosis to death from any cause. Survival analysis was performed using the Kaplan-Meier method and compared among groups using the logrank test. Univariable and multivariable Cox regression analyses of factors affecting survival were used. For all statistical comparisons, a p-value of less than 0.05 was considered statistically significant. All data analysis was performed using STATA software (StataCorp LP, College Station, TX, USA).

The association of NLR and T stage is shown in Table 2 and figure 1. The median level of NLR increased with higher T stage; 1.8, 2.9, 2.8, and 3.6 from T1 to T4 respectively (figure 2). NLR was significantly associated with T stage (Table 2). Sixty-three percent of patients with low T stage (T1 or T2) had low NLR (<2.5), while 66.7 % of high T stage (T3 or T4) had high NLR (>2.5). The median follow-up duration was 6.7 y (95 % CI, 5.4-7.5 y). At the time of analysis, 29 patients (34.1 %) had died. The 3 y, 5 y, and 10 y survival rates were 74.5 (95 % CI; 63.5-82.6), 66.6 (95 % CI; 54.7-76.1) and 60.4 % (95 % CI; 47.5-71.1), respectively. The median OS was not reached (NR) (95 % CI; 7.4 y -NR). As shown in Table 3, factors significantly associated with shorter survival were old age (>65 y), low body mass index (BMI), large tumor size, anemia, and high NLR. The multivariable Cox proportional hazards model revealed that elevated preoperative NLR, age >65 y and large tumor size were independent factors for OS. The adjusted hazard ratio for high NLR was 5.54 (95 % CI, 1.06-28.95, p-value 0.043) as shown in figure 2. Surgical resection is the mainstay of treatment for localized RCC, however, 20-30 % of patients eventually developed recurrence or metastasis[16]. This study demonstrated that NLR was an independent prognostic factor of OS in non-metastatic RCC. This finding is consistent with earlier studies for early-stage RCC both clear cell and non-clear cell subtypes[17-21]. NLR has been shown to associate with worse OS as a continuous and categorical variable. The cut-off level varied among studies ranged from 1.7 to 4.0, which covered the threshold in this study[19-21]. Although BMI and anemia were significant in univariate analysis, only older age, tumor size, and NLR were significantly associated with OS on multivariate analysis. Tumor grade and necrosis data, which are known tumor prognostic factors, could not be retrieved hence these were not included in the model. It was found that NLR was also associated with higher tumor stage and larger tumor size, which is similar to the earlier reports[21-23]. This could be explained by the increase in inflammation in the higher stage of the disease as higher neutrophil is also a poor prognostic marker in advanced RCC[24,25]. Recently there have been many studies to address the use of adjuvant therapy after nephrectomy in localized RCC to improve disease-free survival and OS. Adjuvant therapy, which included the first line agents such as tyrosine kinase inhibitors that significantly inhibit human protein tyrosine kinase, which has a central role in tumour carcinogenesis. Studies using tyrosine kinase inhibitors have shown conflicting results even in the high-risk group[5-7]. Adding immunotherapy, tumor vaccines and radiotherapy have all been explored with disappointing results[26,27]. It was believed that the selection of patients who would benefit the most from adjuvant treatment after surgery is essential and it was proposed that NLR might add value of predicting patients who might benefit from adjuvant treatment in addition to clinical parameters and molecular signatures[28]. The strength of this study was the long follow-up duration and the homogeneity of the specified treatment as no patient received neoadjuvant or adjuvant therapy and the surgical procedures were carried out by only 4 surgeons. The OS data were not confounded by the treatment after recurrence since only 6 patients received treatment with a tyrosine kinase inhibitor. For the reason that it is a retrospective study, pathological and biochemical data, which have been shown the prognostic role could not be completely collected. Despite this limitation, this study confirmed the prognostic role of preoperative NLR in non-metastatic RCC. There is scepticism that systemic inflammatory marker such as NLR might not be an useful predictor of recurrence progression in localized cancers. In summary, NLR is a poor prognostic factor for OS in patients with non-metastatic RCC undergoing nephrectomy. Preoperative measurement of NLR might be a convenient method to identify RCC patients with a poor prognosis. However, since this is an exploratory analysis, further confirmation of these results is required. 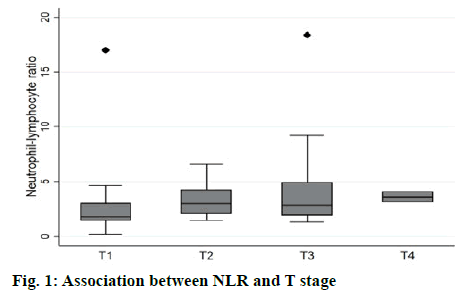 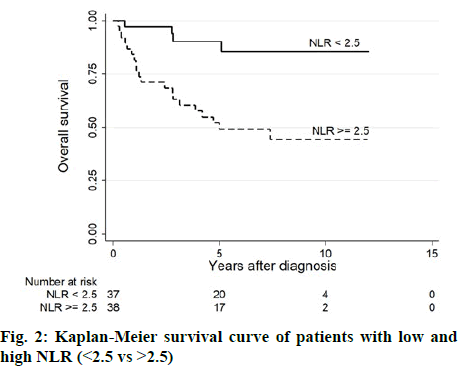 The study was approved by Khon Kaen University Faculty of Medicine Ethics Committee (Number HE621159).

The datasets generated during and/or analysed during the current study are available from the corresponding author on reasonable request.