Protective effect of quercetin in the regression of ethanol-induced hepatotoxicity

A. Vidhya and M. Indira*

This study examined the protective effects of quercetin on chronic ethanol-induced liver injury. Rats were treated with ethanol at a dose of 4 g/100 g/day for 90 days. After ethanol intoxication, levels of serum amino transferases were significantly elevated. Decreased activity of superoxide dismutase, catalase, glutathione peroxidase and glutathione reductase was also observed on ethanol administration. Increased amounts of lipid peroxidation products viz. hydroperoxides, conjugated dienes and malodialdehyde were observed on ethanol intoxication. Ethanol administration resulted in significant decrease in liver glutathione content. After 90 days, the control animals were divided into two groups, the control group and the control+quercetin group. Ethanol-treated group was divided into two groups, abstention group and quercetin-supplemented group. After 30 days, the animals were sacrificed and various biochemical parameters were analyzed. The changes in enzyme activities as well as levels of lipid peroxidation products were reversed to a certain extent by quercetin. Quercetin supplementation resulted in increase of glutathione content to a significant level compared to normal abstention group. Quercetin supplemented group showed a faster recovery than abstention group. This shows the protective effect of quercetin against chronic ethanol induced hepatotoxicity. Histopathological study is also in line with these results.

Alcohol abuse and its medical and social consequences are a major health problem in many areas of the world. Ethanol exerts its effect either directly or through derrangements in metabolic, hormonal and nutritional mechanisms[1]. Excessive generation of free radicals play an important role in alcohol induced cellular damage[2]. Ethanol abuse affects many organ systems most notably the liver causing both acute and chronic liver disease and the central nervous system[3]. A large number of studies are in progress aiming to identify substances that would be effective in reducing the severity of alcoholic liver disease. Although removal of alcohol still represents the most effective intervention to prevent the manifestation of alcoholic liver disease, trials are underway aiming a faster recovery.

It was established that generation of reactive oxygen species is enhanced after ethanol intoxication, and that they play a major role in the creation of oxidative stress, which may additionally be enhanced by the depletion in the antioxidant defense system and, in consequence, by an imbalance between prooxidants and antioxidants[4]. Aim of our study was to induce hepatotoxicity using ethanol and then to assess the reversal of damage once ethanol consumption is stopped.

Flavanoids are a group of naturally occuring compounds widely distributed as secondary metabolites in plant kingdom. One of these ß avanoids, quercetin (3,5,7,3,4-pentahydroxy ß avon), is one of the most prominent dietary antioxidant. The ability of quercetin to scavenge highly reactive species such as peroxynitrite and the hydroxy radical is suggested to be involved in these possible beneficial health effects[5]. Tieppo et al.[6] has stated that quercetin increased the genomic stability in the cirrhotic rats, suggesting beneficial effects, probably by its antioxidant properties[7]. Quercetin is also known to act as an effective antioxidant by chelating metal ions and/or scavenging free radicals[8]. Several studies have demonstrated that quercetin enhanced the antioxidative defense system by upregulating antioxidant enzymes[9].

One of the most important problems faced by those who have stopped alcohol consumption after chronic intake, is the recovery of damaged hepatocytes to normal level. Liver regeneration occurs normally in damaged liver. But the time required varies depending upon the severity of damage, which inturn is determined by the dose and duration of alcohol intake.

Male Sprague Dawley rats weighing between 150 and 200 g were used. Animals were housed in polypropylene cages. Cages were kept in a room that was maintained between 28 and 32° and a 12 h dark and light cycle was maintained. The study protocol was approved by the Institutional Animal Ethics Committee. Animals were handled using the laboratory animal welfare guidelines. Rats were fed with rat feed (Lipton India Ltd). Water was given ad libitum. Quercetin was purchased from M/s SRL Ltd., Mumbai, India and ethanol from M/s Merck Ltd, Mumbai, India. 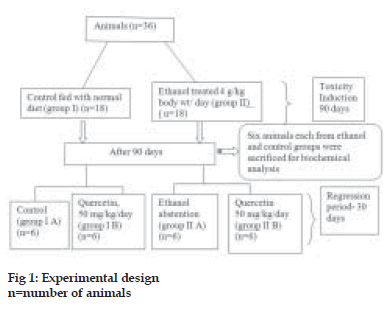 For histopathological studies, liver was fixed in Bauins’ fixative and sections were taken in the microtome. Sections were stained using haematoxylin and eosin. Pathological changes were examined using a sensitive light microscope.

After ethanol administration liver sections showed extensive hepatocellular damage as evidenced by ballooning of hepatocytes, steatosis, vacuolization and dilation of sinusoids (fig. 2a). The histological features of the liver in the control group showed a normal liver architecture and cell structure (fig. 2b). Quercetin supplementation to control rats did not alter normal liver structure (fig. 2c). Abstention from ethanol resulted in reduction in hepatic damage as evidenced by mild steatosis (fig. 2d). The histopathological changes were ameliorated by quercetin treatment. Damage is of lesser degree in quercetin-treated group (fig. 2e).

Ethanol treatment caused significant increase in AST and ALT activities, an indication of hepatocellular damage in rats. Treatment with quercetin reduced ethanol-induced toxicity as indicated by drop in activities of marker enzymes. In alcohol intoxication, as a result of structural changes, an increase in membrane permeability to ions has been demonstrated in different animal models[20]. The increase in membrane permeability causes translocation of ALT and AST into blood circulation as shown by abnormally high level of serum hepatic markers.

Antioxidant enzymes such as SOD, CAT and GPX comprise a major supportive group of protection against free radicals. Chronic ethanol treatment caused significant decrease in SOD, CAT and GPX. There are reports to indicate that there is significant decrease in glutathione peroxidase in chronic ethanol abuse[21]. This is in agreement with our results. However, supplementation of quercetin increased GPx activity significantly. SOD prevents the inhibition of GPX and CAT by scavenging superoxide radicals and GPx and CAT in turn prevent the inhibition of SOD by scavenging H2O2 [22] . In quercetin treated animals, SOD activity is increased, which could be due to the increase in glutathione peroxidase activity that lowered the levels of H2O2, thereby preventing the retro-inhibition on SOD. This is in accordance with earlier reports[23]. Quercetin supplementation attenuated all alterations in antioxidant enzymes- SOD, CAT, GP, GR, reduced glutathione in ethanol treated animals. Quercetin shows beneficial effects on liver damage by enhancing antioxidant enzyme activity and decreasing prooxidant effect[24]. This is due to the ability of quercetin to interact with hydroxyl, superoxide, alkoxyl and peroxyl radicals thereby subsequently scavenging them. Quercetin supplementation led to a slight decrease in antioxidant defense in normal controls. This may be due to prooxidant effect of quercetin in normal cells. Choi et al. had observed earlier that quercetin acts as a prooxidant in normal rats[25].

Glutathione constitutes the first line of defense against free radical and is a determinant of tissue susceptibility to oxidative damage. Quercetin significantly increased the reduced glutathione levels in alcohol intoxication. It has been reported that quercetin corrects the reduction in glutathione concentration and partially prevented the increase in collagen concentration, TBARS and GSSG/GSH ratio[26].

In the present study we observed that there was significant increase in lipid peroxidation products in ethanol consumption as shown by earlier studies[27]. The increased concentration of MDA, hydroperoxides and conjugated dienes, an index of lipid peroxidation may be due to increased production of free fatty acids which may serve as substrates for lipid peroxidation[28]. Quercetin also increased serum albumin and hepatic glutathione levels and reduced the hepatic level of malondialdehyde[29].

Previous studies have demonstrated that quercetin intake prevented and protected the liver from the oxidative damage induced by the ingestion of ethanol[30]. Effects and diminished liver injury by quercetin may be partially related to preservation of antioxidant defenses. The ß avonoid has been shown to scavenge highly reactive species implicated in the peroxidation process such as oxygen and hydroxyl radicals.

Hepatotoxicity induced by ethanol is further confirmed by abnormal histological findings. Toxicity manifestations by ethanol in the liver tissue are revealed by morphological changes such as inflammation around portal triad (Triaditis) with severe fatty degeneration. Quercetin supplementation resulted in a faster recovery of normal cell structure compared to abstention group.