Mosquitoes are responsible for spreading some of the dreadful diseases like malaria (Anopheles), yellow fever, dengue (Aedes) and filaria (Culex). More than a million people die every year from mosquito borne diseases and million more are stricken [1]. Out of these four diseases, malaria is a devastating infectious disease affecting a significant portion of world population. Mostly, it is a cause of death and illness in children and adults in tropical countries [2]. Mortality, currently estimated at over a million people per year, has risen in recent years, probably due to increasing resistance to antimalarial medicines [3]. Thus, it is very essential to develop new antimalarials.

Design and development of new drugs is simplified and made more cost-effective because of the advances in the concepts of quantitative structure activity relationships (QSAR) studies. A methodology of QSAR studies is one of the approaches to the rational drug design. The introduction of Hansch model,in early 1960, enabled chemists to describe the structure activity relationships in quantitative terms and check those using statistical methods [4]. QSAR are statistically derived models that can be used to predict the biological activity of untested compounds from their molecular structures [5,6]. This concept helps to understand the role of physicochemical descriptors of compounds in determining their biological activity. Thus, the QSAR studies help in estimating the characteristics of the new and potent compounds, without synthesizing and evaluating their biological activity.

All the twenty compounds, in the training and test sets, were synthesized in our laboratory by the general procedure reported by Mahajan et al [10].

Antimalarial activity of benzophenone derivatives: All the twenty compounds in the training and test sets were evaluated for their antimalarial activity using Rane’s test [11]. The institutional animal ethics committee of Haffkine Institute, Mumbai, India, approved the animal experiments.

The antimalarial activity was determined by using albino male mice against a malarial parasite Plasmodium berghei. The animals were infected with an intraperitoneal injection of 0.1 ml of citrated heart blood, containing a minimum of 1×106 parasitized red blood cells, drawn from the donor mice, infected one week earlier with Plasmodium berghei NK–65, procured from the Central Drug Research Institute, Lucknow, India. The test compounds were suspended in distilled water by the addition of few drops of tween-80 and a single dose of 160 mg/ kg was administered subcutaneously, 72 h after the infection. A group of six infected mice, treated with chloroquine, was used as a positive control. A group of six infected but untreated mice was used as a negative control. The mice were observed for forty days. The antimalarial activity of the synthesized compounds is expressed as the Mean survival time of mice (MST). Survival time of mice is the period from the day the mouse is inoculated to the day it is found dead. If the MST of the test compound is double the mean survival time of the negative control (MSTC), then the compound is considered to have good antimalarial activity.

Maestro, the molecular modeling software from Schrödinger Inc., USA, was used to obtain different physicochemical descriptors for the synthesized compounds and also to develop quantitative structure activity relationships models. Maestro provides a graphical user interface for all Schrödinger computational programs like LigPrep,QikProp, Strike, etc. The 3D molecular structures of twenty benzophenones derivatives were initially built in Maestro. The structures of these compounds were then refined using the program LigPrep, which helps to determine different conformers, ionization states, tautomer states and potential energy of molecules.

PE is the potential energy, MW is the molecular weight, DM is the dipole moment, MV is the molar volume, IP is the ionization potential, EA is the electron affinity, and Log Po/w is the partition coefficient in octanol/water.

The QSAR studies were carried out to correlate physicochemical descriptors of fourteen synthesized benzophenone derivatives from the training set with their antimalarial activity, expressed as Log MST. The physicochemical descriptors were taken as the independent variables and the antimalarial activity was taken as the dependent variable.

Various QSAR models were developed by correlating either one (simple linear regression analysis) or more than one (multiple linear regression analysis) physicochemical descriptors at a time, with antimalarial activity of these fourteen compounds. The correlation was studied using the program Strike from Schrödinger Inc., USA. The best QSAR model (described by Equation 1, under Results and Discussion) was chosen based on the statistically significant values of correlation coefficient (r), square of the correlation coefficient (r2), Fischer’s value of significance (F), leave one out cross validated (q2) value and standard error (s).

Validation of the best QSAR model

Determination of Lipinski’s value and per cent human oral absorption

The observed antimalarial activity of fourteen compounds was correlated with different physicochemical descriptors listed in Table 1, to develop QSAR models. Physicochemical descriptors are expressed as numerical values that encode different structural features of the molecules. The activity data of the standard drug, chloroquine, was not included in the development of QSAR model as it belonged to a different structural series.

For the training set consisting of 14 compounds, the best QSAR model was obtained when potential energy, dipole moment and electron affinity were correlated simultaneously with the antimalarial activity. The best QSAR model is expressed by Eqn. 1.

In Eqn. 1, r2 is greater than 0.8, s is small and F-value is higher as compared to the tabulated F-value. Thus, Eqn. 1 was found to be statistically significant. If the value of q2 is greater than 0.6, it indicates the suitability of a model for predicting the antimalarial activity of other compounds from the same series. In equation 1, q2 = 0.734, which was higher compared to the value of q2 obtained for correlation of antimalarial activity with other physicochemical descriptors. Hence, Eqn. 1 was considered to be the best QSAR model.

Table 4: Comparison Between The Observed And The Predicted Antimalarial Activities Using The Best Qsar Model For The Trainingset Of Benzophenone Derivatives 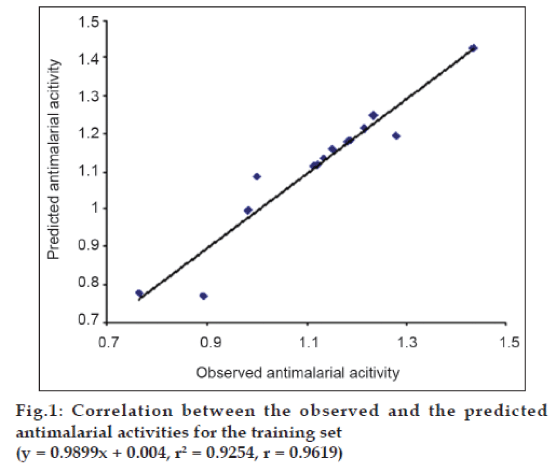 Table 5: Comparison Between The Observed And The Predicted Antimalarial Activities Using The Best Qsar Model For The Test Set Of Benzophenone Derivatives 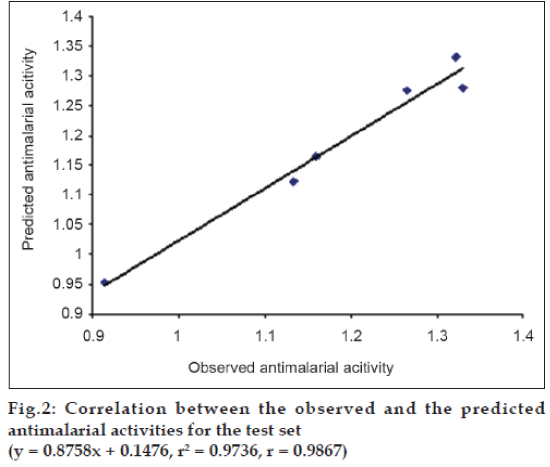 Further, when Lipinski’s value and per cent oral absorption were predicted for the five “Active” benzophenone derivatives from both the training set and test set, it was observed that all the five compounds showed Lipinski’s value as zero and hence, they were predicted to exhibit drug-like characteristics. Also, all these compounds showed 100% oral absorption. Hence, these five compounds were found to be suitable drug candidates.

The QSAR studies helped in predicting good antimalarials, since out of fourteen benzophenones from the training set only two were active, whereas in the test set three out of six compounds were found to be active. Thus, the rate of success to obtain newer antimalarials was increased from 14.28 to 50 per cent.