A fast, inexpensive and direct quantitative Fourier-Transform Infrared Spectroscopic method was established for rosuvastatin calcium for analysis in bulk and solid pharmaceutical dosage forms. Content of rosuvastatin calcium was directly analysed without any solvent extraction by this method. Absorption mode was used on KBr pallets for acquisition of Fourier-Transform Infrared spectra. The method was validated against prescribed parameters as per International Council for Harmonisation guidelines. Range of linearity range was found to be 5-20% w/w in KBr pellet method. Proposed method was successfully applied for the determination of rosuvastatin in solid pharmaceutical dosage forms (tablets). The results suggest that the method is precise, accurate and reproducible. Due to its simplicity, cost effectiveness and less time taking, this method can be employed for routine estimation of rosuvastatin calcium in solid dosage forms in pharmaceutical industry.

Rosuvastatin calcium (fig. 1) is a new generation β-Hydroxy β-methylglutaryl-CoA (HMG-CoA) reductase inhibitor and the most potent of the currently available statins. It is mostly prescribed to reduce the elevated levels of cholesterol, low-density lipoprotein cholesterol (LDL-C), triglycerides and to increase the levels of high-density lipoprotein cholesterol (HDL-C), apolipoprotien B: A1 ratio in the patients suffering from mixed dyslipidaemia, primary hypercholesterolemia, and homozygous familial hypercholesterolemia. It is also prescribed for acute coronary syndromes. It has low extrahepatic tissue penetration as well as lower potential for CYP3A4. Adequate clinical trial evidences are available that confirms the LDL-C lowering efficacy and safety of high-dose rosuvastatin calcium in acute coronary syndromes [1-4]. Rosuvastatin calcium is mostly prescribed drug in obesity management thus manufactured by all leading pharmaceutical firms across the globe. Its sale is estimated to elevate further due to increasing trend of obesity in peoples (https://www.transparencymarketresearch.com). 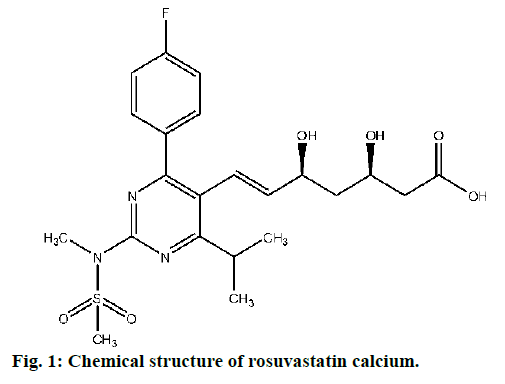 Increased consumption directly elevate the demand which end up in increased production. Meantime quality of the marketed formulations during manufacturing process totally depends upon the reliability and effectiveness of analytical methods that are able to generate consistent and interpretable data [5,6]. Various methods have been developed so far by the analysts across the globe for the assessment of rosuvastatin calcium in individual or combined dosage form based on various analytical techniques. Those established method includes spectrophotometric [7-16], High Performance Liquid Chromatography (HPLC) [17-50], Ultra Performance Liquid Chromatography (UPLC) [51,52], electrode [53], High Performance Thin Layer Chromatography (HPTLC) [54,55], Capillary zone electrophoresis [56], Voltammetry: hanging mercury drop electrode [57], Charge-transfer complex [58]. No doubt these methods are able to deliver desired analytical accuracy but came with added disadvantages too. Along with high cost, complicated procedures and long time consuming analysis, major emerging issue is the impact of these analytical methods on environment. All these established methods consume large volume of organic solvents (someone include hazardous solvents) that are toxic to the workers as well as environment that is forcing the pharmaceutical and chemical firms to look after the ways to reduce the generation of toxic waste [59]. Therefore, it is a global emergency to develop green methods of analysis especially for the analytical operations carried out in pharmaceutical and chemical industries.

Among the spectroscopic techniques, Infrared (IR) spectroscopy has its distinguished place because of analytical ability without utilization of organic solvents. IR radiation region exist between microwave and visible region which can be efficiently used for the analysis of compounds sensitive between 4000 and 400 cm-1.

Fourier-transform infrared (FT-IR) spectroscopy is gaining much popularity in pharmaceutical industry as quality control tool due to its rapid and non-destructive nature, simple sample preparation methods, less or no solvent consumption in qualitative as well as quantitative analysis of raw materials and finished drug products. FT-IR spectroscopy is an optimum choice for minimizing the environmental hazards due to industrial chemical waste as it need very less or no solvent for analysis [60-68]. The structure of rosuvastatin calcium contains various functional groups major one includes O-H stretching of carboxylic acid, O-H stretching (intermolecular bonded), S=O stretching. The band appearing near 810 and 1197 cm-1 were selected for quantification as at that band interference from excipient’s in pharmaceutical formulation is minimal.

Objective of the present investigation was to developing an inexpensive, rapid and environmental friendly method for quantitative analysis of rosuvastatin calcium in bulk as well as solid dosage forms using FT-IR spectroscopy.

Analytical grade rosuvastatin calcium kindly gifted by Lupin Research Park was employed in the present study. IR grade KBr was purhcased from Sigma Aldrich for standard as well as sample pellets. Some solid tablet dosage forms of rosuvastatin calcium (i.e. Akroz, Arvast, Bestor, Crestor, Novostat and razel) were procured from local market of India. All IR spectra were recorded on IR Affinity-1 spectrometer of SHIMADZU with KBr accessory and DLATGS detector. The instrument was operated with IRsolution 1.50.

For calibration purpose, a set of 4 rosuvastatin calcium standards ranging from 5 to 20 mg in KBr were prepared and to get uniform pellet 100 mg was weighed each time. To get homogenous pellets as well as reproducible results identical pressure was applied each time. Then standards spectra of different concentrations of rosuvastatin calcium in mentioned range were analysed and calibration curve was plotted to get straight line equation. Area under the peak for all standard spectra was computed by selecting specific region for quantification of rosuvastatin calcium in bulk as well as solid dosage forms.

This method needs a simple sample preparation prior to FT-IR spectrum acquisition. This one step method involves grinding of the accurately weighed bulk or solid pharmaceutical samples as fine powder in agate mortar that results decrease in particle size for pellet.

Preparation of KBr pellets (with as well as without sample):

KBr pellets of 100 mg were prepared by taking specific amount of rosuvastatin calcium and oven-dried KBr to ensure no residual moisture content. The mixture was condensed in 13 mm die at a pressure of 7 tons for 5 min. Similar procedure was applied for the pharmaceutical samples also. 2 mg of sample was taken in 98 mg KBr for sample pellet. Prepared pellets were scanned in Mid-Infrared region for recording FT-IR spectra.

The resolution of the instrument was optimized at 2 cm-1 by average 20 scans in Mid IR region of 4000-400 cm-1. As per beer’s law the concentration and absorbance is proportional to each other, therefore absorbance mode was selected for quantification of rosuvastatin. Fresh background spectrum was recorded from KBr pellet before each FT-IR run for sample as well as standard. All spectra were recorded in KBr pellet form using same optimized analytical conditions in absorption mode (Table 1).

Accuracy: Recovery studies were performed to evaluate the accuracy of proposed method. For recover studies, different concentration levels of rosuvastatin calcium, that were prepared independently and analysed (n=9). Accuracy was determined by using percentage relative standard deviation (%RSD and from mean percentage recovery. To establish additional data for the same standard addition method was performed. In this, different concentrations of standard rosuvastatin calcium (8, 10, 12 mg) were added to known pre-analysed solid formulation sample and total concentration was determined using proposed method. Percentage recovery or added standard was calculated as: % Recovery=(Ct-Ci)/Ca

LOD and LOQ was determined by using calibration of standard. LOD and LOQ were assessed from 3.3σ/S and 10 σ/S. Where, σ is standard deviation and S is slope of y-intercept of regression equation.

Robustness of proposed method was established by analysing slight change in rosuvastatin calcium-KBr weight by ± 0.2 mg and assessed as relative standard deviation.

This novel method for analysis of rosuvastatin calcium in pharmaceutical formulations with single step sample preparation using FT-IR spectroscopy has wide range of advantages over previously available lengthy, costly as well as time consuming methods. In this method, extraction process is completely eliminated that make this method rapid, inexpensive and green. That will not only reduce the cost and time of analysis but also eliminate the potential risk of toxic chemicals to manpower as well as environment.

Most commonly used excipients for the solid pharmaceutical dosage forms are magnesium stearate, talcum powder, lactose, starch and avicel. They are added in various ratios that vary from product to product. From comparison of both (fig. 2 and fig. 3), it is clear that standard and excipients + standard spectra easily stretch over the surface of one another. Therefore there is no any significant interference caused by the matrix components which allows that method to practice without any extraction. 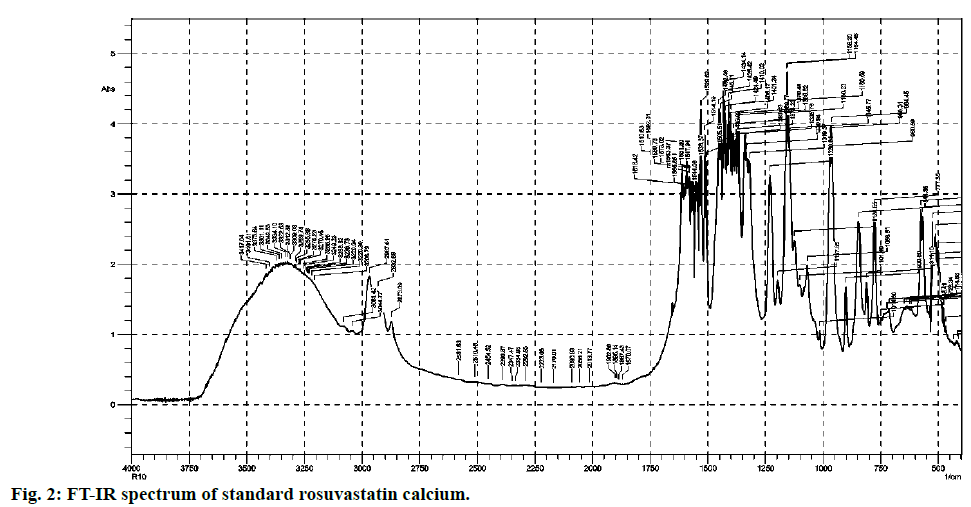 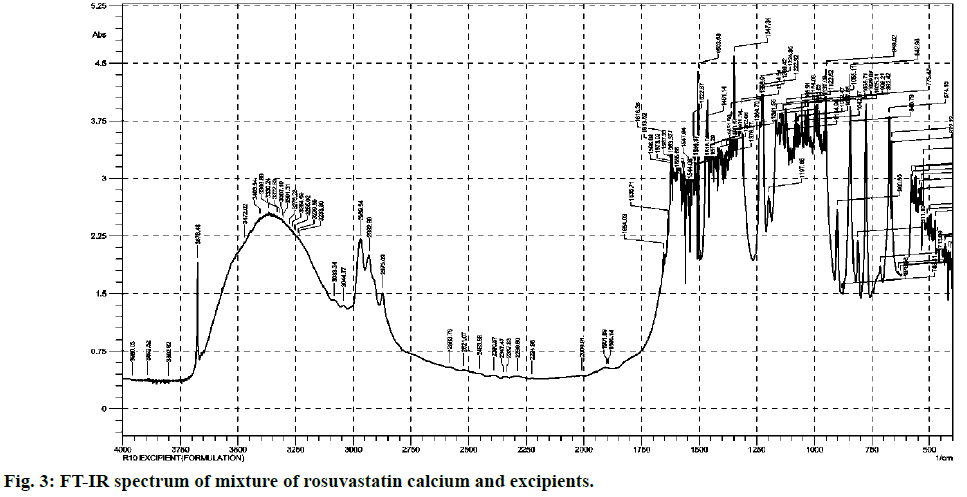 Figure 3: FT-IR spectrum of mixture of rosuvastatin calcium and excipients.

FT-IR spectra of pure rosuvastatin calcium were used for the calibration purpose. Spectra contain several prominent bands; instead of selecting single band, different regions were used for making calibration curves (5-20 % w/w) from peak intensity and peak area for more accurate results. Most linear and suitable regions (810-800 and 1210-1180 cm-1) were selected for the analytical purpose (Table 2). Beer’s law was obeyed between 5 -20 % w/w (fig. 4 and fig. 5). 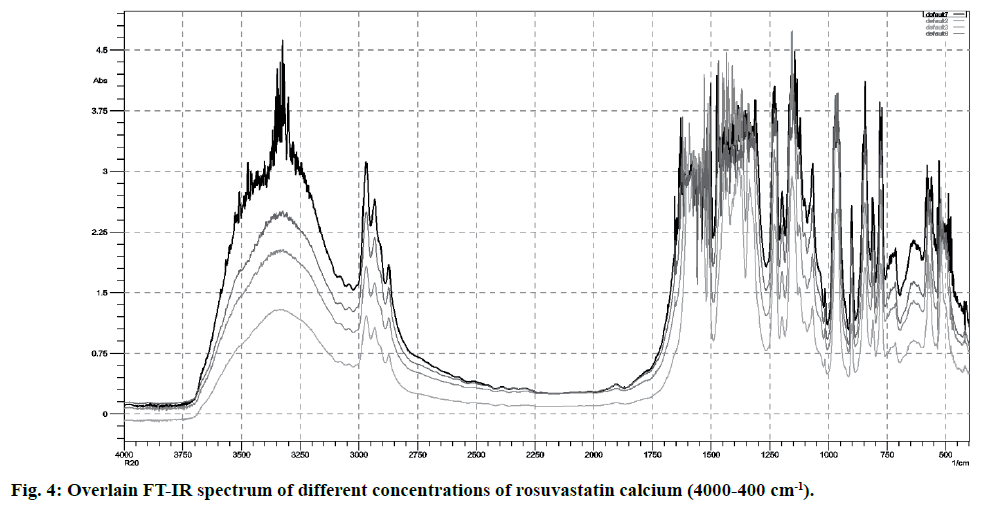 LOD as well as LOQ were also calculated and were found to be 0.044 and 0.134 % w/w for 810 -800 cm-1 region while 0.0084 and 0.069 % w/w for 810 -800 cm-1 region respectively. Suitability of the method was confirmed by analysing rosuvastatin calcium in its marketed solid dosage formulations. Assay values indicated insignificant interference of excipients matrix in analysis (Table 4).

The present study represents the development of green, sensitive and rapid method for accurate quantification of rosuvastatin calcium in pure drug as well as solid pharmaceutical dosage formulations i.e. tablets using FT-IR spectroscopy. This method performed better as compare to previously reported methods. This method has made analysis simple by eliminating hazardous and complex step of extraction. This method has potential to replace the existing laborious, non-ecofriendly as well as costly methods for the analysis of rosuvastatin calcium in pharmaceutical as well as chemical industry.