Autism was a kind of pervasive developmental disorder disease, also known as infantile autism or autism disorder [1-3]. Its main clinical manifestations were social communication disorder, communication disorder and rigid. In 2018, a survey by the United States Centers for Disease Control and Prevention showed that the prevalence of autism was about 1 % and most of them were children [4]. Autism spectrum disorder (ASD) was a common manifestation of autism. It was reported that the prevalence of ASD among children in the United States can reach 2 % and the boys were more likely to suffer from the disease than girls [5]. In China, the prevalence of ASD among children has also reached about 0.5 % and the proportion of boys and girls was about 5:1 [6]. Thus it can be seen that the prevalence rate of ASD was high and most of them were boys. However, its pathogenesis was not very clear and most of the studies think that it was related to the synergistic effect of heredity, environment, autoimmune function, oxidative stress, inflammatory biomarkers [7-9]. Methylenetetrahydrofolate reductase (MTHFR) [10] was a metabolic enzyme that plays a key role in the folate metabolism, deoxyribonucleic acid (DNA) methylation and DNA synthesis and repair. Folate-methionine metabolism was abnormal in patients with ASD, thus MTHFR gene polymorphism may be associated with ASD. Some studies have pointed out that the frequency of MTHFR gene mutation in ASD patients is significantly higher than that in healthy patients [11,12] and some studies focus on Chinese children, suggesting that MTHFR gene mutation may be a genetic risk factor for ASD in children [13]. Due to the small sample size of single study, inconsistent examination methods and confounding factors, the results of different studies are inconsistent. At present, single study is not enough to clarify the relationship between MTHFR gene polymorphism and ASD genetic susceptibility. However, the foreign meta-analysis of MTHFR gene polymorphism and ASD has not been included in domestic literature due to the analysis of multiple MTHFR gene polymorphisms. Therefore, this study collected relevant literature at home and abroad and conducted a meta-analysis on the relationship between MTHFR (C677T) gene polymorphism and ASD, so as to provide reference for the clinical prevention and treatment of ASD in children.

The case-control study on the relationship between the MTHFR C677T gene polymorphism and autism susceptibility published at home and abroad with autism patients as the case group and the people with no autism as the control group; the frequency of genotypes or alleles in the case group and the control group was studied; the repeatedly published literature was included in the study with larger sample size; a standardized gene polymorphism detection technique was used.

Stata 12.0 software was used for meta-analysis. Five genotypes (T vs. C, CT vs. CC, TT vs. CC, TT+CT vs. CC and TT vs. CT+CC) were selected to calculate the merging effect value odds ratio (OR) and 95 % confidence interval (CI) to estimate the association between MTHFR (C677T) gene polymorphism and ASD. Q test and I2 heterogeneity were used to evaluate the qualitative and quantitative heterogeneity of the included study. If p>0.1 or I2<50 %, choose the fixed effect model, otherwise choose the random effect model. Sensitivity analysis was used to explore stability of consolidated results. The Begg’s method and Egger’s method was used for testing publication bias. 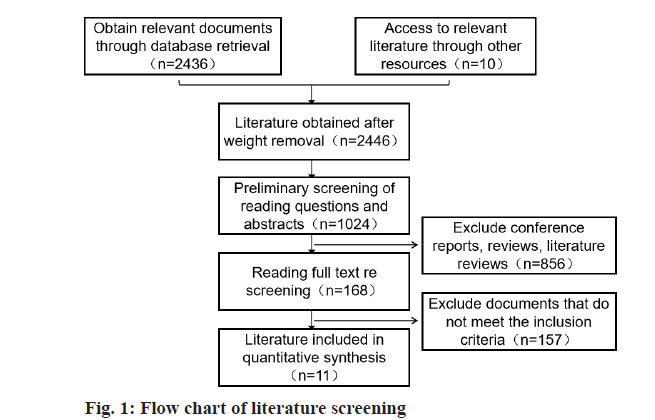 The basic characteristics of the inclusion research:

Table 1: The Basic Characteristics of The Inclusion Research 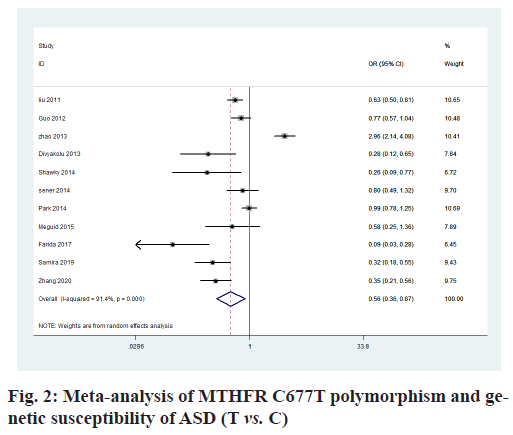 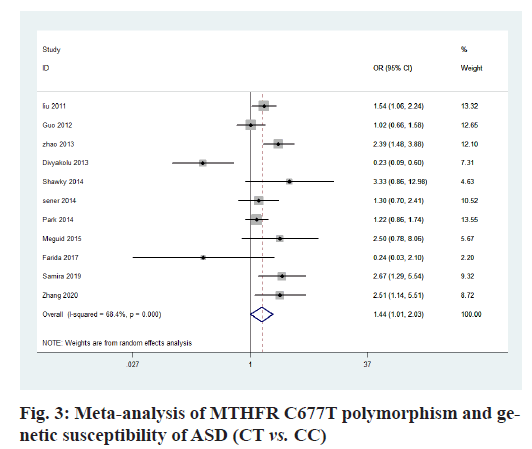 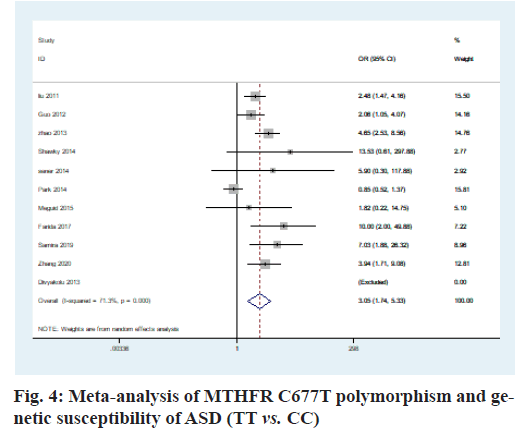 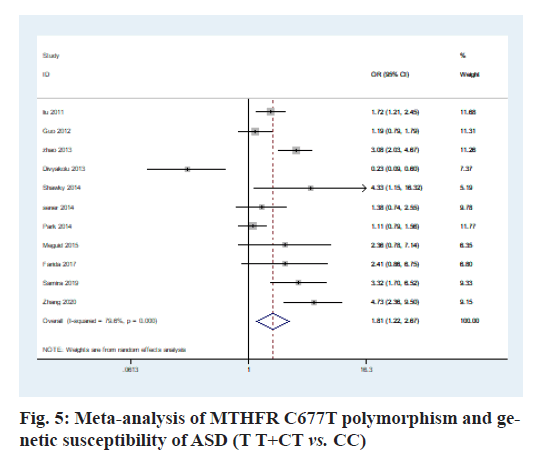 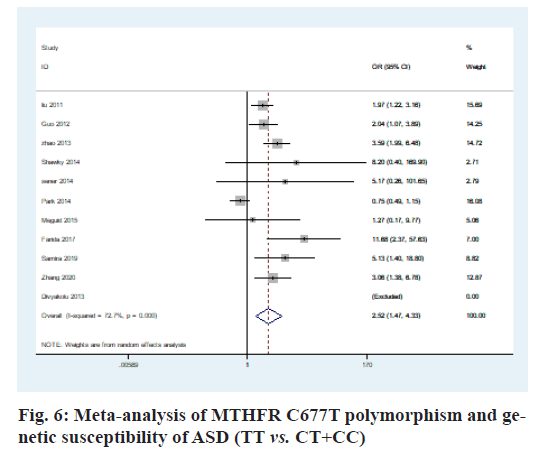 In order to investigate whether the conclusions are consistent, the cumulative meta-analysis was used. According to the cumulative meta-analysis of publication year, it is found that the research results are not completely consistent. The estimated value of OR and the CI tend to be stable and the changing trend is good. To make the experimental results more credible, the literature with larger samples should be used for this study (fig. 7). 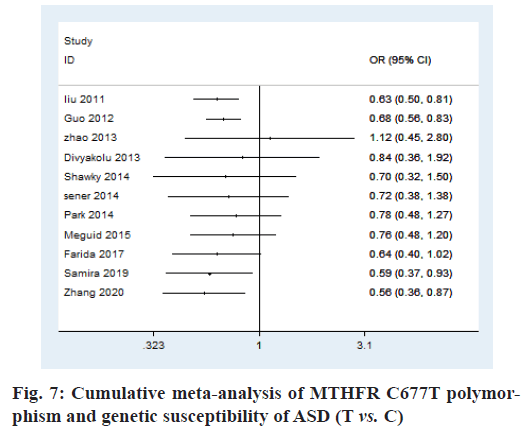 The sensitivity of this study is analyzed and the results show that there is no essential change in the combination of the fixed effect model and random effect model. At the same time, when any research results are excluded, the merger results do not change essentially, indicating that the results of this meta-analysis are stable (fig. 8). 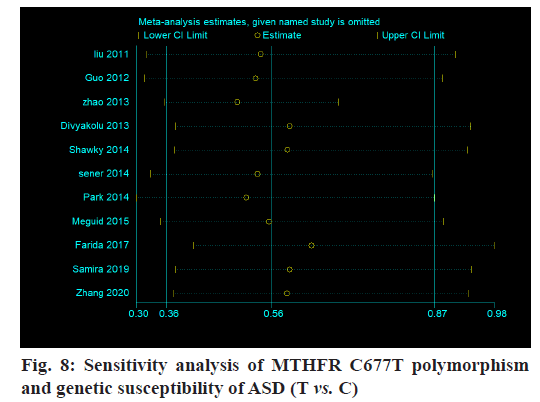 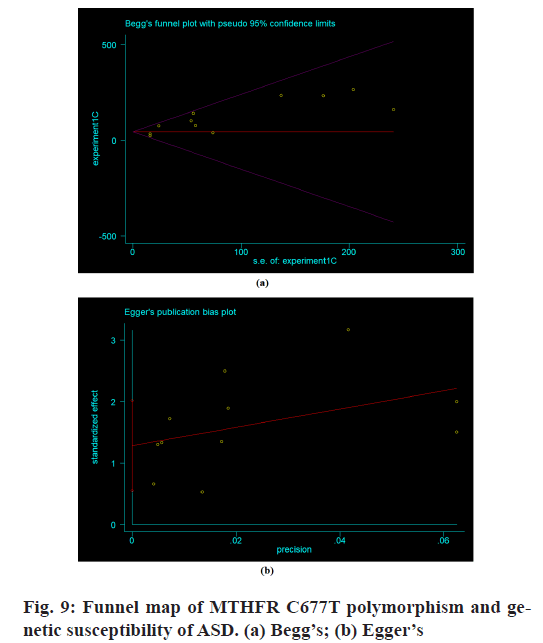 Figure 9: Funnel map of MTHFR C677T polymorphism and genetic susceptibility of ASD. (a) Begg’s; (b) Egger’s

Previous studies have pointed out that autism was a neuropsychiatric disorder with brain dysplasia [22]. The incidence was increasing and it was a genetically heterogeneous disease with a heritability of 90 %. Its pathogenesis has always been the focus of researchon the treatment of autism. Most studies believe that the pathogenesis of autism may be related to the polygene regulation [23,24]. With the deepening of research, the research on genes related to autism susceptibility was becoming more and more abundant, but the conclusions were not uniform. There were many types of mutations in the human MTHFR gene. CT mutation at 677 locus was considered to be related to the occurrence of human diseases and related to the key enzyme that affects the occurrence of human diseases, MTHFR enzyme. MTHFR enzyme mainly converts N-5, N-10 methylenetetrahydrofolic acid to N-5-Methylenetetrahydrofolate (N-5-MTHF) and participates in the methionine cycle, which makes homocysteine re-methylation to methionine. CT mutation at 677 locus of the MTHFR gene can decrease the activity of MTHFR enzyme and affect the methylation of DNA [25], which can regulate the proliferation and differentiation of neural stem cells effectively and play a certain role in the normal function of the brain. For autism patients, the 677 CT mutation of the MTHFR gene may increase the risk of autism. Therefore, it is of great significance to further study the relationship between MTHFR gene 677 CT mutation and autism susceptibility from a genetic point of view.

To sum up, this study pointed out that there is a certain correlation between the MTHFR C677T gene and autism susceptibility. As the pathogenesis of autism was complex and affected by both environmental and genetic factors, it was limited to consider only the influence of single locus gene polymorphism in this study. At the same time, the selected sample size was insufficient and the environmental and polygene-related effects were not fully taken into account, which leads to some limitations in the conclusions of the study. Therefore, further research on the influence of large sample size and many factors are needed to further explore the relationship between the MTHFR C677T gene polymorphism and autism susceptibility.