Remimazolam is a new type of ultra-short acting benzodiazepine, which is widely used in general anesthesia and sedation of intensive care patients[1-3]. Remimazolam can affect synaptic transmission, induce neuronal apoptosis in a dose-dependent manner and lead to impairment of long-term learning and memory, resulting in anesthetic effects. The regenerative effect of Slit Guidance Ligand 2 (SLIT2) on blood vessels and the sprouting effect of neurons may be related to nerve regeneration. Trans membrane receptor Roundabout 4 (ROBO4), as a vascular specific receptor of SLIT, can also regulate proliferation and neuronal apoptosis[4]. SLIT2 suppresses the regeneration of blood vessels by combining with ROBO4, repressing tissue damage and edema formation, thereby exerting a protective role in the nervous tissue system[5,6]. The long-term use of remimazolam can facilitate glial cell apoptosis and reduce the Gamma (γ)-Aminobutyric Acid (GABA) neurons of nerve cells[7]. SLIT/ROBO4 signaling pathway has been proved to be an extracellular protein, which has the functions of controlling neuronal migration and repulsion, guiding the direction of neuron axons, etc[8]. This research investigated the changes of SLIT/ROBO4 signaling pathway in rats under remimazolam treatment and aimed to clarify the effect of remimazolam on neurons in the rat brain and its related effects.

This study was approved by the laboratory animal ethics committee. Remimazolam tosilate for injection was purchased from Jiangsu Hengrui Medicine Co., Ltd. The channel water maze was made of black plexiglass (developed by the Institute of Materia Medica, Chinese Academy of Medical Sciences).

The rats were sacrificed, the brains were taken and the brain tissue was separated and then placed in D-Hank’s solution. The cerebral cortex was separated and cut into tissue fragments of 1 mm×1 mm×1 mm and then placed in a 15 ml centrifuge tube. An equal amount of 0.125 % trypsin, final concentration of 0.0625 %, was digested in a Carbon Dioxide (CO2) incubator for 12 min and shaken once at 6 min. After 12 min, an equal amount of inoculum (Dulbecco’s Modified Eagle Medium (DMEM), 10 % Fetal Bovine Serum (FBS) and 10 % Human Serum (HS)) was added to stop the trypsin digestion reaction. The supernatant was discarded after centrifugation. 2-3 ml of inoculation solution was added and gently pipetted 2-3 times and filtered through a 200 mesh filter. The obtained cell suspension was collected. The density of cells was counted and calculates with a hemocytometer under an inverted microscope. The cell density was adjusted to 1×106/ml with the inoculation solution and then inoculated into a 6 well plate (2 ml/well) pretreated with polylysine. The 6 well plates were cultured in an incubator with 5 % CO2 at 37°. After 24 h, the impurities were washed with sterile Phosphate-Buffered Saline (PBS) buffer and replaced with a neuron-specific medium (96 % neurobasal+2 % B27+2 % glutamine). The neuronspecific medium was used every 2-3 d and the medium was changed once every 2-3 d. The primary rat cortical neurons that were cultured for 7 d were identified by immunohistochemical staining using the neuronspecific protein Neuron-Specific Enolase (NSE) and the positive expression rate of more than 90 % could be used for following experiments. The successfully cultured primary rat cortical neurons were divided into control group and remimazolam group by random number table method.

After the remimazolam anesthesia machine was tested, the remimazolam reagent was added to the vaporizer. Then the cells in remimazolam group were placed in a sterile special airtight container, the air outlet was connected to the analyzer and the air inlet (5 % CO2) was connected to the anesthesia machine. The container was placed in a constant-temperature water bath at 37° and the vaporizer was rotated to the specified scale according to the experiment. When the concentration reached the experimental requirements, the vaporizer was closed, the container was sealed. Each group was treated for 6 h. After treatment, cells were taken out from the airtight container and put into the incubator to continue culturing.

Primary rat cortical neurons were seeded in 96-well plates (at a density of 1×104 cells) and incubated for 24 h. After cells adhered, Roswell Park Memorial Institute (RPMI)-1640 medium containing 1 % FBS was serum-starved for 2 h and then 1 μl of remimazolam at different concentrations (2, 4 and 8 μmol/l) was added to each well and incubated for 24 h (eight duplicate wells were set at each concentration range and 1 μl Dimethyl Sulfoxide (DMSO) was added to the solvent control group). 15 μl of MTT was added to each well for another 2-4 h of incubation. The culture medium was discarded, 100 μl of DMSO was added and the shaker was protected from light and mixed for 15 min.

Primary rat cortical neurons were seeded in 6 well plates (1×105 cells per well). After the cells were treated with remimazolam at a final concentration of 8 μmol/l for different time periods (0, 3, 6, 12 and 24 h), the cells were collected in centrifuge tubes. Primary rat cortical neurons were stained according to the instructions of Annexin V-Fluorescein Isothiocyanate (V-FITC) cell apoptosis detection kit (Beyotime). After incubation in the dark at room temperature for 20 min, the cells were suspended in 500 μl of PBS and transferred to a flow tube. The early apoptosis and late apoptosis of cells were detected by flow cytometry. CytExpert 1.2 software was used to count the apoptosis of cells in each time period.

Primary rat cortical neurons treated with remimazolam for different time (0, 3, 6, 12 and 24 h) were collected in centrifuge tubes. Protein was extracted and 30 μg was loaded after denaturation. Proteins were separated by 10 %-12 % Sodium Dodecyl Sulfate- Polyacrylamide Gel Electrophoresis (SDS-PAGE) and transferred to Nitrocellulose (NC) membrane semi-dry. The membrane was blocked with 5 % skim milk for 1.5 h at room temperature and washed 5 times with Tween® 20 Detergent (TBST) for 5 min each. Primary antibodies such as Bcl-2-Associated X Protein (BAX), B-cell lymphoma 2 (Bcl-2), cleaved-caspase-3 (clecas- 3), cleaved-Poly Adenosine Diphosphate-Ribose Polymerase (cle-PARP) and Beta (β)-actin (dilution ratio of 1:2500) were added and incubated overnight on a shaker (4°). The corresponding primary antibody was withdrawn, washed 5 times with TBST and the secondary antibodies Horseradish Peroxidase (HRP) labeled goat anti-rabbit and anti-mouse Immunoglobulin G (IgG) were added to incubate for 2 h at room temperature on a shaker. β-actin was used as the internal reference. ImageJ 1.42q software was used for grayscale analysis.

Cells or tissues were collected and lysed with lysis buffer Radioimmunoprecipitation Assay (RIPA). Total protein was extracted with TRIZOL (Total Ribonucleic Acid (RNA) isolation) reagent by boiling method and protein was quantified with a Bicinchoninic Acid (BCA) kit. Total proteins were separated by 10 % SDS-PAGE, transferred to Polyvinylidene Fluoride (PVDF) membrane, blocked with 5 % Bovine Serum Albumin (BSA) for 45 min and incubated with primary antibody overnight at 4°. Then the secondary antibody was added, shaken for 45 min and developed by Electrochemiluminescence (ECL). Both SLIT2 and ROBO4 antibodies were purchased from Abcam United States of America (USA) and the dilution ratio was 1:1000.

Statistical Package for Social Sciences (SPSS) 20.0 software was used for statistical analysis. Measurement data were expressed as mean±standard deviation (x±s). The t-test was used for comparison between groups, with test level of Alpha (α)=0.05. p<0.05 indicated that the difference was statistically significant. 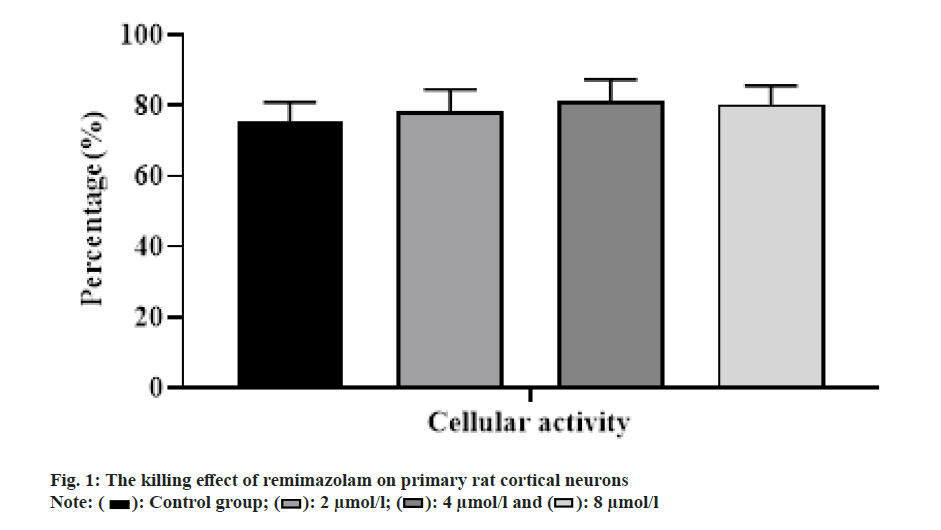 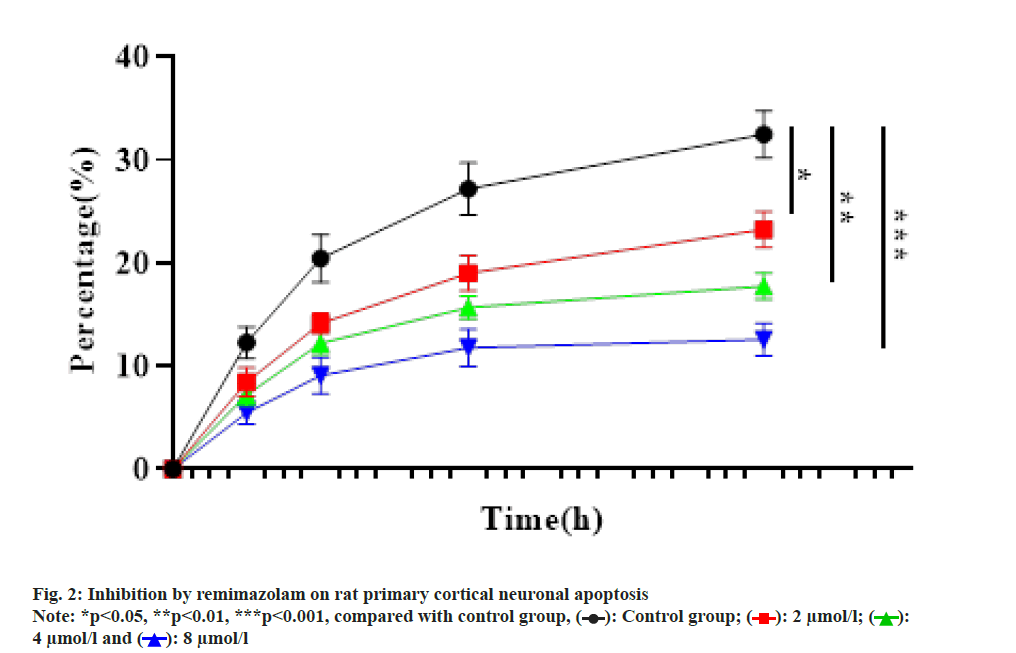 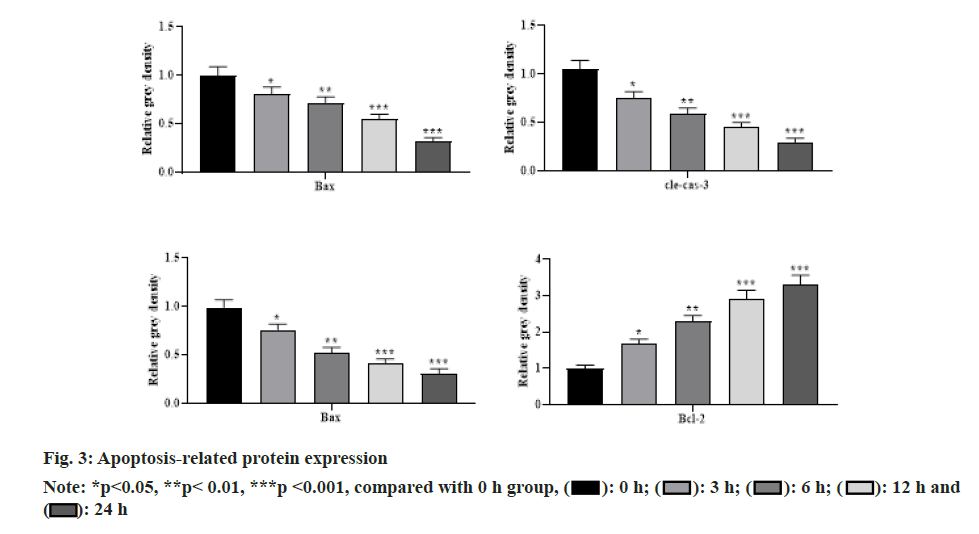 To further clarify relationship of SLIT2 and ROBO4, primary rat cortical neurons were administrated with remimazolam at a final concentration of 8 μmol/l for 24 h under SLIT2 inhibitor pretreatment and Western blot measured related protein levels. With prolongation of remimazolam treatment time, BAX, cle-cas-3 and cle-PARP showed a gradual up regulation and Bcl-2 showed a gradual down regulation in SLIT2 inhibitor and remimazolam co-treatment group relative to remimazolam group as shown in fig. 5, indicating that remimazolam represses primary rat cortical neuronal apoptosis via regulation of ROBO4 through SLIT2. Remimazolam, a short-acting intravenous anesthetic commonly used in clinical practice in various departments, has the advantages of quick recovery, less adverse reactions, rapid onset of action, no accumulation in continuous infusion, etc.[9,10]. Nevertheless, its mechanism of action has not yet been elucidated. Remimazolam is developed on the basis of midazolam, which has better efficacy and safety[11], better anesthesia effect[12] and remimazolam can also act on GABA receptors to reduce neuronal excitation. There is no accumulation in the body and the retention time is shorter than that of midazolam, which can induce less movement of rats, thereby exerting a better sedative role[13,14].