Gastric cancer (GC) commonly referred to as stomach cancer can develop in any part of the stomach and may spread throughout the stomach and to other organs, particularly the oesophagus, lungs, lymph nodes and the liver. Despite a reduction in the rate of mortality, GC still ranks as the second most frequent cancer worldwide. There are about 1 000 000 new cases diagnosed and 800 000 deaths worldwide each year[1,2]. The 5 y survival rate for the curative surgical resection ranges from 30-50 % for patients with stage II disease and from 10-25 % for patients with stage III disease. The operative mortality rate for patients undergoing curative surgical resection at major academic centers is less than 3 %[3]. Understanding the molecular mechanisms underlying the initiation and progression of GC is important for prevention, early diagnosis and identifying novel therapeutic targets for GC.

A proliferation-inducing ligand (APRIL, also known as TALL-2, TRDL1, or TNFSF13), a member of tumor necrosis factor (TNF) family, was originally identified in cell lines and primary samples from various tumor lesions in 1998 and was named for its capacity to stimulate the proliferation of tumor cells in vitro and in vivo[4]. In contrast to most TNF family members, APRIL is processed in the Golgi apparatus into the active soluble form by a furin convertase[5]. APRIL is expressed by a subset of immune cells that also produce B-cell activating factor (BAFF), monocytes, macrophages, dendritic cells, neutrophils, activated B cells and T cells as well as in some non-immune cells such as epithelial cells and osteoclasts[4,6-8]. Moreover, APRIL is abundantly expressed in a variety of tumor cells and tissues, such as lung carcinoma, melanoma, lymphoid malignancies and in particular gastrointestinal tumors including rectum, duodenum, colon, stomach, lung, and oesophagus[9-17].

Previous studies reported have further confirmed that APRIL mRNA and protein are overexpressed in GC tissues; yet, these are not expressed or weakly expressed in normal tissues[18-20]. To study the role of APRIL gene in the occurrence and development of GC, lentiviral vectors of RNAi targeting the human APRIL gene were constructed and the inhibitory effect of this construct on APRIL gene’s short hairpin RNA (shRNA) was observed on the growth of human gastric cancer cell lines MGC-803 and SGC-7901 in vitro and in vivo.

The human APRIL cDNA sequence (Genbank accession number: NM_172088) was searched for suitable siRNA target palindromic sequences and aaTCCAGGATGCTGGAGTTTA was selected. DNA oligos containing the target palindromic sequences were chemically synthesized, annealed and inserted into the lentivirus gene transfer vector pLVTHM (Biovector Science Lab) which encoded a green fluorescent protein (GFP) sequence by double digestion with Age I, EcoR I, and ligation with T4 DNA ligase in accordance to the Biovector Science Lab’s guidelines. The ligation was transformed into competent E. coli DH5α cells. The correct transformant was identified by restriction enzyme analysis and DNA sequencing. As a control for APRIL siRNA, a corresponding non-silencing siRNA sequence (5’-TTCTCCGAACGTGTCACGT-3’) was used.

293T cells and MGC-803 and SGC-7901 were purchased from the American Type Culture Collections. Cells were grown in 5 % CO2 saturated with humidity at 37° and cultured as monolayer in RPMI 1640 supplemented with penicillin/streptomycin and 10 % FBS. The recombinant virus lenti-APRILsi targeting APRIL and the control lentivirus, lenti-NC were produced by co-transfecting 293T cells with the lentivirus expression plasmid and packaging helper plasmids (psPAX2 and pMD2.G, Biovector Science Lab) using Lipofectamine 2000 reagent according to the manufacturer’s instructions. The lentiviral supernatant was harvested 48 h post-transfection, and the virus titre was determined by hole-by-dilution. MGC-803 and SGC-7901 cells were infected with recombinant lentivirus respectively at a multiplicity of infection (MOI) of 20.

Total RNA in MGC-803 and SGC-7901 cells were extracted with Trizol (Invitrogen, USA), and reverse transcription was then conducted with M-MLV reverse transcriptase (Promega, USA) at 42° for 60 min according to the manufacturer’s recommendation. The expression level of APRIL mRNA in these cell lines was analyzed by Real-time PCR using the SYBR green PCR master mix (TaKaRa) with the following program: 95° for 15 s, followed by 45 cycles consisting of 5 s at 95°, 30 s at 60°. Primers used were as follows: APRIL (forward: 5’-GGTATCCCTGGCAGAGTC-3’; reverse: 5’-CTGTCACATCGGAGTCATC-3’) and human β-actin (forward: 5’-GGCGGCACCACCATGTACCCT-3’; reverse: 5’-AGGGGCCGGACTCGTCATACT-3’). The expression of APRIL was determined by normalization of the threshold cycle (Ct) of APRIL to that of the control housekeeping gene β-actin. Data were analyzed using the 2-△△CT method[21]. All reactions were performed in triplicate.

Cell viability was assessed using the MTT assay. Briefly, gastric cancer cells MGC-803 and SGC-7901 were seeded in 96-well plates in complete culture medium at a density of 105 cells per well in triplicate for the Lenti-APRILsi and Lenti-NC groups. After 1, 2, 3, 4 and 5 d, 20 μl of MTT (5 mg/ml; Sigma-Aldrich Corp.) was added and incubated for another 4 h at 37°. Then 150 μl of dimethyl sulfoxide was added to each well and thoroughly mixed for 10 min. Absorbance was measured at 570 nm using a Victor Multilabel Counter (Model 1420 PerkinElmer). Cell growth was calculated as means of triplicate per group.

MGC-803 and SGC-7901 cells infected by lentivirus were digested with trypsin and seeded into 6 multiwell plates at 800 cells/well in triplicate. After culturing for 14 d, colonies formed were fixed with paraformaldehyde for 30 min and stained with Giemsa stain solution (Sigma-Aldrich Corp.) for 20 min, pelleted by centrifugation, re-suspended in RPMI 1640 medium and counted using a micropublisher 3.3RTV (Olympus).

For each group, cells infected by lentivirus were washed with D-Hanks solution when the confluency was about 80 %, and then fixed for at least 1 h in 70 % ethanol at 4°. Cells were then washed and stained with 50 μg/ml PI in the presence of 100 μg/ml RNase (Sigma- Aldrich Corp.). After 5 min at room temperature, the cells were analyzed by Cellomics ArrayScan VTI HCS Reader (Thermo Scientific Company) in triplicate for both groups.

The lentiviral vector system for expressing shRNAs directed against APRIL was used in this study. After a single exposure of SGC-803 cells to the encoding lentivirus, a high percent (more than 90) of transfectants expressed GFP at 72 h after the transfection as shown in figures 1a and 1b, indicating a high and stable transfection of lentiviral vector system. Similar results were observed in SGC-7901 cells (data not shown). In order to investigate the effect of lenti-APRILsi on the expression of APRIL mRNA, RT-PCR was performed. As shown in figure 2, APRIL mRNA levels in lenti- APRILsi-infected MGC-803 and SGC-7901 cells were significantly reduced by 3 and 4 fold when compared with that of in Lenti-NC infected-MGC-803 and SGC- 7901 cells, respectively. 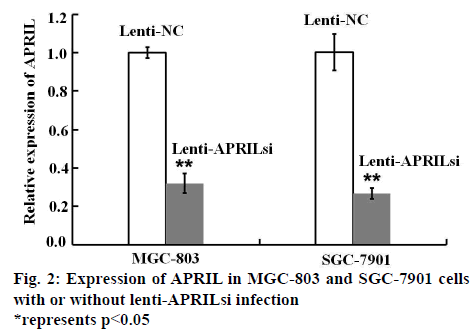 Figure 2: Expression of APRIL in MGC-803 and SGC-7901 cells
with or without lenti-APRILsi infection
*represents p<0.05

As demonstrated in figures 3a and 3b, after lenti-APRILsi infection, the viability of MGC-803 cells was evidently decreased at 2, 3, 4 and 5 d, respectively, when compared to lenti-NC-infected MGC-803 cells. While the viability was not apparent difference between lenti-APRILsi-infected SGC-7901 cells and lenti-NC infected group at 2 and 3 d except in 4 and 5 d, where the difference was significant.

Figure 3: Effect of lenti-APRILsi and lenti-NC on viability of MGC-803 and SGC-7901 cells
The effects of

lenti-NC on the viability of a. MGC-803 and b. SGC-7901 cells. Viability was detected using MTT assay 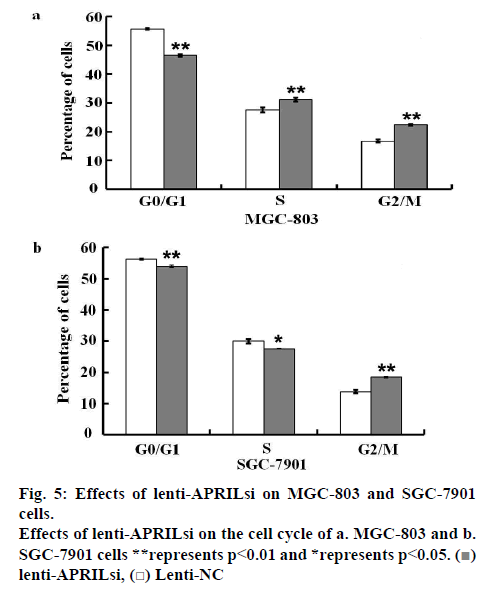 GC still represents a great healthcare burden all over the world. In the absence of strategies for early diagnosis and detection, GC continues to have poor prognosis[22]. During the course of cancer development, gene abnormality such as mutation or amplification, which might implicate tumor survival, progression and metastasis, can be detected frequently. In human GC, a series of specific gene (oncogenes and tumorsuppressor genes) mutations are observed, including the APRIL gene.

As a new member of TNF superfamily, APRIL shares about 30 % homology with BAFF (also known as B lymphocyte stimulator, BLyS, TALL-1 or THANK) from the TNF family. These share 2 receptors, B cell maturation antigen (BCMA) and transmembrane activator and calcium modulator and cyclophilin ligand (CAML) interactor TACI, whereas APRIL binds to a third receptor heparin sulfate proteoglycans (HSPGs) and BAFF binds to a third receptor BAFFR (also known as BR3)[23-25].

In animal models, APRIL and BAFF show a tumorpromoting activity, as their overexpression induces development of B cell neoplasia[26,27]. However, APRIL tumor-promoting activity is not restricted to B cell lymphomas. Indeed, APRIL was also shown to provide a proliferative/survival signal to solid tumor cells. Although modestly detectable in vitro, this activity has been observed significantly in vivo by overexpressing APRIL in tumor cells or by blocking endogenous APRIL[4,10,28].

RNA interference (RNAi), discovered in 1998 by Fire et al, has recently emerged not only as a powerful genetic tool for studying gene functions, but also for developing highly specific drugs by posttranscriptional silencing of gene expression[29,30]. The effective delivery of siRNA molecules into target cells or tissues is critical for successful RNAi application. The lentiviruses are a family of retroviruses that can integrate into the genomes of not only dividing cells but also nondividing cells with high efficiency to achieve stable, long-term expression of shRNAs and thus have become one of the widely used delivery systems for exogenous genes transfer[31,32].

In this study, it was demonstrated that lentiviruses could efficiently deliver APRIL-siRNA into MGC-803 and SGC-7901 cells. The infection of lenti-APRILsi not only greatly down-regulated the endogenous APRIL mRNA expression in both cell lines, but also reduced the cell viability and colony formation as detected in the MTT assay and colony formation assay, respectively, implying the siRNA sequences targeting APRIL could be a potential mode of gene therapy for GC. Moreover, silencing APRIL by siRNA leads to significant reduction of number G0/G1 phase cells and apparent increase of number of G2/M phase cells in both cell lines, indicating that lenti-APRILsi arrested the cell cycle at G2/M phase, thus lead to inhibition of cell proliferation.

Thus this study demonstrated that siRNA targeting of APRIL mRNA via a lentivirus vector system effectively inhibited the APRIL mRNA expression in MGC-803 and SGC-7901 cells, reduced the cell viability and colony formation, and further confirmed that lenti- APRILsi decreased the cell viability by arresting cell cycle at G2/M phase. However, this form of gene therapy is now limited to only to treat cancer and failure of such approach could worsen the condition. Incompatibility issues and immune responses could also lead to failure of therapy.

The authors report no conflicts of interest in this work.