Quality assurance of herbal products may be ensured by proper quality control of the herbal ingredients and by means of good manufacturing practice. We have developed a simple scheme for the standardization and authentication of Sulaharan Yoga a poly herbal formulation. Sulaharan Yoga was prepared as per Ayurvedic Formulary of India. Inhouse and marketed preparation has been standardized on the basis of organoleptic characters, physical characteristics and physico-chemical properties. The set parameters were found to be sufficient to standardize the Sulaharan Yoga and can be used as reference standards for the quality control/ quality assurance study.

Sulaharan Yoga (SY-1), an Ayurvedic polyherbal formulation, consists of Strychnos nux-vomica and other seven ingredients in Vati (Tablet) form. It is one of the most widely used Ayurvedic product indicated for pain/colic, malabsorption syndrome, diarrhea, abdominal lump and digestive impairment. The World Health Organization (WHO) has appreciated the importance of medicinal plants for public health care in developing nations and has evolved guidelines to support the member states in their efforts to formulate national policies on traditional medicine and to study their potential usefulness including evaluation, safety and efficacy [1,2].

The need of quality control for Ayurvedic drug is due to the fact that the preparation of drug according to the ancient method has been reduced due to the commercialization of Ayurvedic pharmacy during past era [3]. The present paper reports on the standardization of Sulaharan Yoga based on organoleptic characters, physical characteristics; physico-chemical properties and HPTLC fingerprint study.

In-house formulation of Sulaharan Yoga was prepared as per Ayurvedic Formulary of India. The ingredients number 1 to 4 were washed, dried and powdered and passed through 80# sieve. The ingredients number 5, 6, 7 and 8 were cleaned and powdered individually and passed through 80# sieve. All the ingredients were mixed thoroughly in specified ratio (1 parts each) to obtain a homogeneous blend. The blended mass was expelled through tablet punch machine fitted with suitable die. The rolled vatis (Tablets) were dried in a tray-dryer at a temperature not exceeding 60º. It was packed in a tightly closed glass containers for further use. One marketed sample of Sulaharna Yoga (Sarmayu, SY-2) were chosen for evaluation. Sarmayu and the in-house preparation were standardized based on their oganoleptic characters, physical characteristics and physicochemical properties.

The organoleptic characters of the samples were carried out based on the method described by Siddique et al. [4] Microscopic analysis of in-house formulation and the marketed formulation were carried out by classical pharmacognostical methods [5]. The authenticity of the individual ingredients was confirmed by comparison of the power characteristics with those given in the literature.

To determine the total ash value 2 g of powdered material of each formulation were placed separately in a suitable tared crucible [6] of silica previously ignited and weighed. The powdered drugs were spread into an even layer and weighed accurately. The materials were incinerated by gradually increasing the heat, not exceeding 450° until free from carbon, cooled in a desiccator, weighed and percentage ash was calculated by taking in account the difference of empty weight of crucible and that of crucible with total ash. The ash obtained as above was boiled for 5 min with 25 ml of dilute hydrochloric acid; the insoluble matter was collected on an ash less filter paper, washed with hot water and ignited to constant weight. The percentage of acid-insoluble ash with reference to the air-dried drug was calculated.

pH of different formulations in 10% w/v of water soluble portions was determined using standard glass electrode at 240 according to the prescribed standard method in Indian Pharmacopoeia. Thickness of tablets was measured using sliding calipers. Hardness indicates the tensile strength of a tablet. It was measured using a Monsanto hardness tester. Twenty tablets were taken in a Roche Friabilator rotating at a speed of 100 rpm for 10 min and reweighed after the treatment. Friability was expressed as % loss in weight. Twenty tablets were weighed individually and collectively. Average weight per tablet was calculated from the collective weight. Then the weights of individual tablets were compared with the average weight to determine weight variation.

Disintegration test was performed in a basket rack assembly supporting six glass tubes of 3 inches long, open at the top and held against a 10-mesh screen at the bottom end of the basket rack assembly. One tablet was placed in each tube and the assembly was moved up and down at a frequency of 28 to 30 cycles per min at a temperature of 38º. For fluorescence test, 1 mg of powdered drugs of each formulation were exposed to ultraviolet light at wavelength of 366 nm and daylight [5] while wet, after being treated with different reagents.

Bulk density [7,8] was determined using the formula Db= M/Vb,,where M is the mass of the particles and Vb is the total volume of the packing. Vb was determined by placing 100 g of the powdered formulation in a Jolting volumeter, the initial volume was noted and the sample was then tapped until no further reduction in volume was noted. The initial volume gave the bulk density value and the reduced volume after tapping gave the tapped density. For determining angle of repose, the fixed funnel and the free standing cone method was employed. Powder or granules was carefully poured through the funnel until the apex of the conical pile just touched the tip of the funnel placed 2.5 cm above the surface. Tan a= H/R or a= arc tan H/R, where a is the angle of repose, R being the radius of the conical pile.

Sodium content [9,10] was estimated by flame photometry. NaCl content of the in-house and marketed formulation was determined by titrating a solution prepared by dissolving 2-3 g in 25 ml of purified water against standard silver nitrate solution (0.1N) using potassium chromate as indicator. Each ml of 0.1 N AgNo3 solutions is equivalent to 0.005845 g of NaCl. For determing sulfur, 0.5-1 g powdered sample was mixed with 10 ml of carbon tetrachloride saturated with bromine in a 250 ml beaker, the mixture was kept cold and left over night in a fume chamber. The mixture was then digested on a water bath with 10-15 ml of concentrated nitric acid. It was further digested with 10 ml concentrated hydrochloric acid till a syrupy mass formed. The mass was extracted with 100 ml hydrochloric acid, boiled and filtered through Whatman No. 40 filter paper. The residue was washed with hot water, filtered through Whatman No. 41 paper in to a 600 ml beaker and the filtrate was acidified with hydrochloric acid, 20 ml of 10 per cent barium chloride solution was added stirred and digested on a burner. The BaSO4 precipitate was then filtered through a Whatman No. 42 filter paper, washed with water, ignited at 8500 in a muffle furnace in a pre weighed platinum crucible, cooled and weighed. Each g of the precipitate is equivalent to 0.13734 g of sulphur.

HPTLC study [11,12] of methanol extracts of the individual ingredients, in-house formulation and marketed formulation were carried out along with different marker compounds corresponding to the active ingredients to ensure the presence of active ingredients in all the formulations. For HPTLC, 2 g of each sample were extracted with 25 ml of methanol on a boiling water bath for 25 min consecutively three times using fresh portion of 25 ml methanol, filtered and concentrated. The chromatograph was performed by spotting standards and extracted samples on pre coated silica gel aluminum plate 60F-254 (10×10 cm with 250 μm thickness) using Camag Linomat IV sample applicator and 100 μl Hamilton syringe. The samples, in the form of bands of length 5 mm, were spotted 15 mm from the bottom, 10 mm apart, at a constant application rate of 15 nl/s using nitrogen aspirator. Subsequent to the development, TLC plates were dried in a current of air with the help of an air-dryer. Densitometric scanning was performed on Camag TLC scanner III in the absorbance/reflectance mode.

The protocol employed to develop pharmacoepial standards are mostly based on triple P (pharmacognostical, physicochemical and phytochemical screening). As part of standardization procedure, the finished in-house product Sulaharan Yoga (SY-1) was tested for relevant physical and chemical parameters along with the marketed formulation (SY-2). All the samples were grayish yellow in color, smooth with fine tablets, having characteristic of asafoetida odour, possessing pungent taste (Table 1).

Variations were observed in most of the physicochemical parameters studied. The diameter of SY-1 was found to be higher than that of SY-2. Similarly thickness, hardness, friability, weight variation, disintegration time (Table 1) were also relatively higher in the case of SY-1. When subjected to assay, the sulphur, sodium and chloride contents of SY-1 sample were found to be 11, 30 and 56%, respectively, whereas, those of SY-2 sample were 12, 39 and 61%. The sodium percentage for SY-2 was much higher than other (39%). While the chloride percentage was also higher in SY-2 sample (61%).

Quality tests (Table 1) for different Sulaharan Yoga were performed for moisture content, water soluble extractive, methanol soluble extractive, ash content, and acid insoluble ash, and were found to be within standard ranges [13]. Loss on drying at 105º, alcohol soluble extractive, water soluble extractive values of SY-1were found to be much higher when compared to SY-2. However total ash, acid insoluble ash and pH were similar to that for both the samples. In fluorescence analysis the power samples were exposed to day light and ultraviolet light at wavelength of 366 nm after being treated with different reagents as reported in Table 2. Fluorescence analysis results indicated no fluorescent material in any of formulation.

*Measurement is the average of three readings 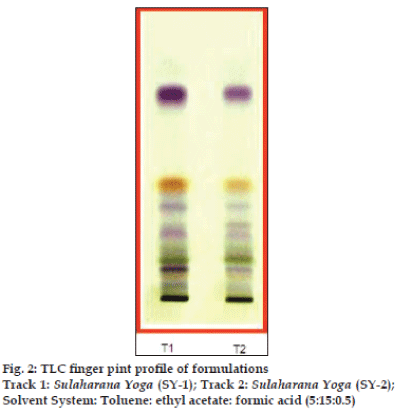 In conclusion, the pharmacognostic study, physicochemical constant, preliminary phytochemical studies and TLC, HPTLC fingerprint profiles have been useful for deciding the identity, purity and strength of the polyherbal formulation and also for fixing standards for this Ayurvedic formulation. Thus the present study will certainly help to build a monograph of the Ayurvedic formulation in the Indian Formulary.