To explore the use of an experimental design based on pooled sample measurements to improve the efficiency of research sample analysis, a total of 40 serum samples were randomly selected from healthy human subjects and an additional 40 samples were collected from intensive care unit patients. The samples were mixed to obtain 20 samples containing 2 individual serum samples per vial and 10 samples containing 4 individual serum samples per vial for both the control group and the intensive care unit group. Ten analytes were measured using an autoanalyzer, which included proteins, enzymes and organic and inorganic molecules. The results obtained from the pooled samples were statistically similar to the results obtained from individually analyzed samples. A pooled-sample experimental design could be applied in the analysis of biological samples.

Life sciences and clinical research is often conducted through comparison of a control group with an experimental group that has received a form of intervention such as treatment with a therapeutic agent. Large samples are usually required for this type of research and the clinical and/or biochemical differences that appear between the 2 groups can be assessed by determining the sampling errors with statistical analysis. However, the use of a large sample means that large number of samples often have to be analysed, which may be laborious and require additional resources, such as expensive analytical kits. More importantly, it is often difficult to control the quality of the analysis between batches, particularly in the case of biological samples[1-4]. To address this issue, an experimental design was established wherein multiple samples were pooled in batches and co-analyzed, thus facilitating fast, high-quality analysis of fewer samples. However, it was unclear whether batch analysis altered the measurement of specific biochemical markers, such as the levels of proteins and enzymes, in a statistically significant way compared to the individually analyzed samples. Therefore, in this study, serum specimens from 40 healthy subjects were assessed with regards to some common clinical markers individually and in pooled batches of 2 and 4 samples. Interestingly, the clinical results obtained from samples assessed in pooled batches were similar to their individually analyzed counterparts.

Forty serum samples from randomly selected subjects who visited the hospital for a regular medical check-up were collected. Samples were then mixed in batches of 2 samples per vial to obtain one batch of 20 samples in total and 4 samples per vial to obtain another batch of 10 samples in total. In addition, 40 serum samples were randomly selected from patients in the Intensive Care Unit (ICU) and mixed in the same manner.

One serum sample was diluted with normal saline to concentrations of 100, 80, 60, 40 and 20 % and analytes were measured as described above. The results were transformed to percentage. The sample concentrations were plotted against measured values to form a scatter diagram as shown in figure 1. The outcome for an indicator was considered to be suited by a mixed sample when the r-value was close to 1 and the slope was close to 1. 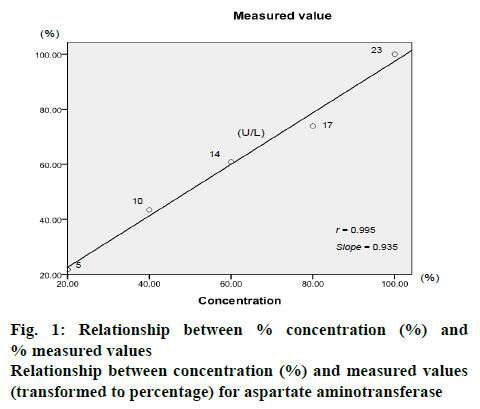 Values of mean and standard deviation (SD) were calculated on the basis of the measured values in different groups. The expected mean value was the mean value of the single serum for the pooled serum group. The expected SD was the standard error (SE), which was calculated using the Eqn., SE-SD/√n, where SE is the standard error, SD is the SD of the single serum group and n represents the number of single serum samples in the pooled serum sample. The expected values of mean and SD were compared with the measured data. Serum samples from patients in the ICU and healthy population were used to compare effects between single and pooled sample measurements. The independent sample t-test was used to assess the difference between the means of 2 groups. The analyses were made using SPSS statistical analysis software (SPSS Inc., Chicago, IL). P-values <0.05 (two-tailed) were considered significant. P-values from each dataset were also used to evaluate application effect between single and pooled sample measurements; near values of P from single or pooled sample measurements implied a valid design of pooled sample measurements.

Table 2: Mean Values from Single and Pooled Serum Samples for All Analytes Tested

Table 3: Standard Deviation of Single and Pooled Serum Samples for All Analytes Measured

The scientific research usually addresses a group issue rather than individual issue, therefore, the design of pooled sample is accepted[5-8]. The pooled samples were similar to the diluted samples, when a serum sample was diluted to concentrations of 100, 80, 60, 40 and 20 %, the percentages of the various measured values should also be 100, 80, 60, 40 and 20 %; thus, the r- and slope-values between concentration and percentage of measured value should be close to 1. Results showed that the r- and slope-values were close to 1 for all indicators, suggesting that it was reasonable to measure pooled samples.

Patients in the ICUs of hospitals are mostly those in the end stages of a terminal disease, which is usually accompanied by multiple organ failure. Thus, serum samples from these patients were used in this study to assess multi-sample batch analysis compared to samples from control subjects. Serum samples were assessed for the levels of proteins, enzymes and the presence of organic and inorganic molecules. The results showed that the serum chemistry of ICU patients was mostly abnormal and there were wide variations in the sample-to-sample measurements obtained; the P-values obtained from the individually analyzed and batch-analyzed samples were similar at a significant level. The SE for the pooled serum samples was also found to decrease as the number of samples in the batch increased, conforming to SE=SD/√n. This further indicated that the measurements obtained from the pooled samples are equivalent to individual sample measurements.

In summary, assessing clinical samples as part of pooled batches could simplify experimental processes and improve the efficiency of analysis, especially for assessments that are typically accompanied by large errors due to variation between different batches, such as enzyme-linked immunosorbent assays. Indeed, this study has shown that a pooled-sample study design could be of great significance to enable multiple samples to be analyzed in the same experiment and reduce errors. Although a pooled-sample experimental set-up could be used cautiously, the result of statistical analysis could be accepted when P-value is very small. For experiments with a limited quantity of sample, such as those with mouse serum, using a pooled-sample experimental design could enable additional analyses to be carried out simultaneously or reduce the rate of sample collection. Thus, the experimental design described in this study could be of value to the field of life sciences research.