Stereoselective reduction of prochiral ketones by plant and microbial biocatalysts

Chiral alcohols are the key chiral building blocks to many enantiomerically pure pharmaceuticals. The biocatalytic approach in asymmetric reduction of corresponding prochiral ketones to the preparation of these optically pure substances is one of the most promising routes. The stereoselective reduction of different kinds of prochiral ketones catalyzed by various plants and microorganisms was studied in this work. Benzyl acetoacetate, methyl 3-oxopentanoate, ethyl 3-oxopentanoate, and ethyl butyryl acetate were chosen as the model substrates for β-ketoesters. Benzoyl acetonitrile, 3-chloro propiophenone, and 1-acetyl naphthalene were chosen as aromatic aliphatic ketones. Finally, 2-methyl benzophenone and 4-chloro benzophenone were selected as diaryl ketones. Plant catalysis was conducted by Daucus carota, Brassica rapa, Brassica oleracea, Pastinaca sativa, and Raphnus sativus.For microbial catalysis, Aspergillus foetidus, Penicillum citrinum, Saccharomyces carlbergensis, Pichia fermentans, and Rhodotrula glutinis were chosen. Chiral alcohols were obtained in high yields and with optical purity. A superiority in the microorganisms' performance in the bioreduction of prochiral ketones was detected. Among microorganisms, Rhodotrula glutinis showed remarkable results with nearly all substrates and is proposed for future studies.

The importance of obtaining enantiopure substances in the chemical or pharmaceutical industry has inspired considerable efforts to search for methods of constructing chiral precursors, especially optically active alcohols[1,2]. These alcohols are important intermediates and building blocks for the synthesis of pharmaceutically active compounds such as orphenadrine, fluoxetine, tomoxetine, cloperastine, neobenodine, and carbinoxamine[3].

Chiral alcohols with high optical purity can be obtained from the stereoselective reduction of prochiral ketones either by chemical or biological methods. Despite the vast progress of organic chemistry in chiral synthesis, biocatalysis as an alternative has attracted much attention recently from the viewpoint of green chemistry[4].

Biocatalysis performed by whole cell living organisms is regarded as one of the most effective and promising routes because of its regio- and stereoselectivity, mild and environment-friendly condition. This method appears advantageous over enzymatic reduction of carbonyl compounds using an isolated enzyme, since the oxido-reductase, cofactor (NAD(P)H) and its regenerating system are all located within the cell[5,6].

There are numerous works on the asymmetric reduction reaction catalyzed by whole cell biocatalysts with excellent enantioselectivity and yield. The previously reported works can be divided into two periods. Before the year 2000, the focus was on microorganisms as biocatalysts. Baker’s yeast was then the microorganism most widely used for the reduction of prochiral ketone[7]. At the turn of century, reports on the use of whole plant cells to reduce prochiral ketones began to appear[8]. Daucus carota has been the plant most frequently used to convert prochiral ketones to relevant chiral alcohols until now[9-11].

Progressive studies on the use of biocatalysts in chemicals and pharmaceuticals to obtain important optically active alcohols show the great value of this method. The objective of the current study was to explore the asymmetric reduction of some important prochiral ketones (fig. 1). For this purpose, five plants (D. carota, Brassica rapa, Brassica oleracea, Pastinaca sativa, and Raphnus sativus) and five microorganisms (Aspergillus foetidus, Penicillum citrinum, Saccharomyces carlbergensis, Pichia fermentans, and Rhodotrula glutinis) were chosen because of their efficiency and availability. In this paper, we report our results in the bioreduction of important prochiral ketones (fig. 2) from different categories using the aforementioned biocatalysts.

Optical rotations were measured with a Kruss P8100. The 1H NMR spectra was obtained with an Avance III Bruker 400 MHz instrument using TMS as the internal standard. Bioreduction reactions were monitored by GC-MS analysis (compound 1a-7a) equipped with an HP-5 Agilent capillary column (30 m×0.25 mm; 0.25 μm) and a CPChirasil- DEX CB Varian GC column. HPLC analysis (compound 8a, 9a) was carried out in a Knauer HPLC pump 1000, UV detector 2500 Knauer, and a 7725 injection valve with a 20 μl loop equipped with a Nucleocell Delta (4.6 mm×250 mm×5 μm) Macherey-Nagel, Germany. Preparative TLC was carried out on Silicagel 60 F254 Merck (Darmstadt, Germany). 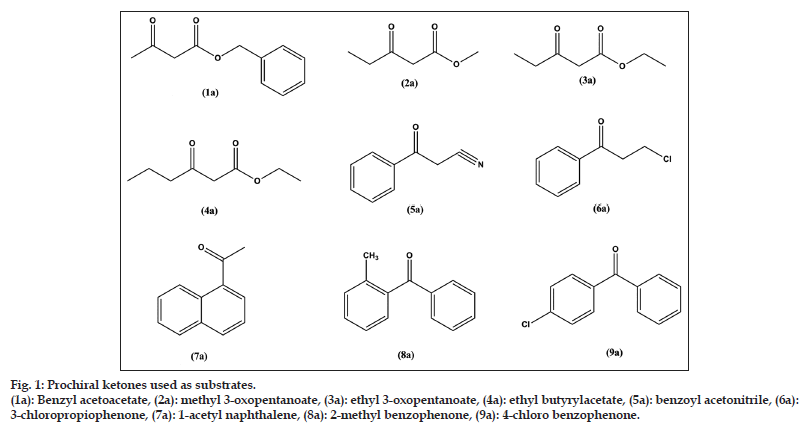 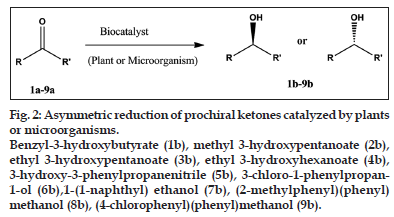 General procedure for the asymmetric reduction of ketones with plants

The plant roots of D. carota, B. rapa, R. sativus, P. sativa, and B. oleracea were excised. Their surfaces were disinfected with 70% EtOH for 5 min and 20% NaClO for 10 min, and then they were rinsed thoroughly with sterile distilled water. Roots were cut and put in 500 ml Erlenmeyer flasks (75 g per each). The substrate (50 mg) was dissolved in 5 ml of absolute ethanol, and then the solution was added to each Erlenmeyer flask. Incubation was continued for 144 h (6 days). Each experiment was repeated at least three times.

General procedure for the asymmetric reduction of ketones with microorganisms

The stock cultures were maintained on a Sabouraud dextrose agar medium at 4° and freshly sub-cultured before being used in transformation experiments. Ten 500 ml Erlenmeyer flasks, each containing 100 ml of Sabouraud broth medium, were inoculated with freshly obtained cells and incubated at 25° in a rotary shaker (150 rpm). The cultures were allowed to reach a constant cell density (detected by optical density or dry cell weight). The substrate (50 mg) was dissolved in 5 ml of absolute ethanol, and then solution was added to each Erlenmeyer flask. A higher concentration of substrate resulted in lower conversion and a decrease in yield. Incubation was continued for 144 h (6 days). Each experiment was repeated at least three times.

Compounds 1a-9a were reduced to the corresponding racemic alcohol with NaBH4 in MeOH[12]. The reduced products were purified by preparative TLC, and their chemical structures were confirmed by 1H NMR.

After 2 and 4 days of incubation, biomass was separated from the media by filtration (plants) or centrifugation (microorganism). The media was extracted with EtOAc (×3). The solvent was dried over anhydrous Na2SO4 and removed in vacuo. The samples were analyzed by GC-MS (1a-7a) or HPLC (8a and 9a). The methods were established prior to sample analysis by use of racemic alcohols.

Assignment of absolute configuration for alcohols

Among the plants tested, B. oleracea, D. carota, and P. sativa reduced benzyl acetoacetate (1a) with a high conversion rate, and all plants produced benzyl (S)-(+)-3-hydroxybutyrate (S-1b). B. oleracea achieved the highest stereoselectivity (>99% ee) (Table 1). All microorganisms except P. citrinum could produce (S)-alcohol with a high conversion rate; using S. carlbergensis and A. foetidus as biocatalysts resulted in a higher optical purity. (R)-Alcohol was not produced in any bioreduction.

Table 1: Results for bioreduction of benzyl acetoacetate (1a)

Among plants and microorganisms, only R. glutinis and A. foetidus could reduce benzoyl acetonitrile (5a). Using R. glutinis as the biocatalyst resulted in an outstanding conversion yield and optical purity with (S)-(−)-3-hydroxy-3-phenyl propanenitrile (S-5b) as the main product, which is a useful precursor in the synthesis of (S)-fluoxetine, the active form of fluoxetine (Table 5).

In the case of 3-chloropropiophenone (6a), the plants D. carota and P. sativa could reduce the ketone with low yield but high optical purity. Among microorganisms, S. carlbergensis, P. citrinum, and R. glutinis were capable of producing 3-chloro-1- phenyl propanol (6b). R. glutinis could produce (S)-(−)-3-chloro-1-phenylpropanol, a useful precursor for the synthesis of (S)-fluoxetine, with acceptable yield (70%) and high optical purity (93% ee). As could be expected, elimination and dehalogenation products such as propiophenone, 1-phenyl-1-propanol, and phenyl vinyl ketones were also observed in the reduction of (6a) (Table 5).

For compound (7a), the conversion rate when using plants as the biocatalysts was very low and insignificant. Among microorganisms, only R. glutinis could produce optically active alcohol (S-7b) with high yield (94%) and stereoselectivity (>96%). (S)-(−)-1-1-(naphtyl)ethanol (S-7b) is an important intermediate in the synthesis of mevinic acid which has an HMG-Co-A reductase inhibitory effect (Table 6).

Diaryl ketones like 2-methyl benzophenone (8a) and 4-chloro benzophenone (9a) are important prochiral ketones for the production of diarylmethanols which are important intermediates for the synthesis of pharmaceutically interesting molecules, such as (S)-cloprastine, (S)- carbinoxamine, (R)-orphenadrine, (R)-neobenodine. Among plants and microorganisms, only R. glutinis could produce the relevant chiral alcohol (S-8b) for compound (8a) with 45% conversion rate and more than 99% optical purity. In the case of compound (9a), only S. carlbergensis and R. glutinis could produce chiral alcohol (R-9b). The conversion rate (>99%) and optical purity (>99% ee) were very high when R. glutinis was used as the biocatalyst (Table 7).

In view of these results, it can be concluded that plant and microbial biocatalysis is an efficient, easy, green procedure and an alternative to chemical methods for the production of enantiopure chiral alcohols. Overall, our results show the superiority of microorganisms over plants in the bioreduction of prochiral ketones. This may be attributed to the presence of more dehydrogenases in microbes than in plants. However, in some cases and in the production of a special enantiomer, some plants were more successful. Among microorganisms, R. glutinis showed a noteworthy performance and could reduce nearly all prochiral ketones with high conversion rates and optical purity. Thus, R. glutinis can be recommended as a promising microorganism for yeast mediated stereoselective production of the aforementioned chiral alcohols.

Table 6: Results for bioreduction of 1 acetyl naphtalene (7a).

We are grateful to the Alexander von Humboldt Foundation for supporting our institute by donating a Krüss Automatic Polarimeter P8100 under a Research Group Linkage Project (3.4-IRN/1101775).