Tranexamic acid (TA) is often used for excessive bleeding by competitively inhibiting the activation of plasminogen to plasmin, a molecule responsible for the degradation of fibrin [1]. However, TA undergoes ionization in physiologic environments; its oral bioavailability is expected to be low due to inefficient absorption through membranes. There is a necessity to design and synthesize more lipophilic TA prodrugs. These prodrugs can provide the patent drug in a sustained release manner which might result in better clinical outcome, more convenient dosing regimens and less side effects than the original medication [2]. Many recent studies have focused on improving the stability, absorption and potency by peptidyl modification based on the peptide transporter system of mammalians, which can mediate the absorption of peptidyl drugs with amide bonds [3-5]. Tyrosine and histidine, have special functions for phenol and imidazole side chains in medicines, metalloproteins and specific enzymes by common coordinating ligands in vivo, aside from being protein frame. Glutamine, lysine, serine, phenylalanine and leucine are usually used as components of proteins to form a specific electrostatic and hydrophobic environment. Thus, tranexamic acid derivatives modified by amino acids, i.e. TA-His (1), TA-Leu- His (2), TA-Glu-Phe (3), TA-Glu-Lys (4), TA-Ser-Tyr (5) and TA-Ser-Phe (6) were efficiently synthesized in this study through solid-phase peptide synthesis and characterized by electrospray ionisation mass spectrometry (ESI-MS) and proton nuclear magnetic resonance (1H NMR). Preliminary studies on DNAbinding properties of derivatives using ultraviolet (UV) absorption spectroscopy are described. 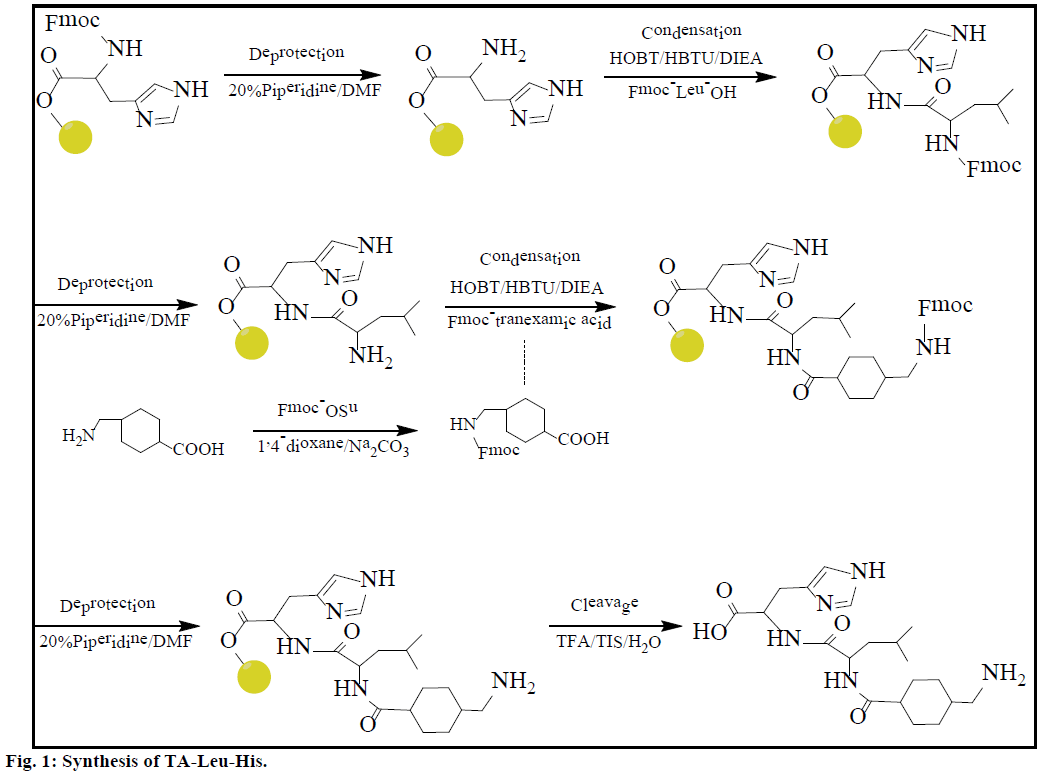 TA derivatives were analyzed and purified on an Agilent C18 column (250×9.4 mm) with 5 μm silica as a stationary phase. A gradient elution with eluent A (water) and eluent B (acetonitrile) (30:70 v/v) was used at a flow rate of 1.0 ml×min-1. 1H NMR experiments were performed using a Bruker DPX-400 MHz instrument with TMS as the internal standard. Mass spectra were analyzed on an Agilent Esquire 3000 mass spectrometer fitted with an ion spray source working in positive ion mode and with methanol as the solvent. UV/Vis absorption spectra were recorded in a quartz cell (light path 10 mm) on a TU-1810 UV/Vis spectrometer. The ctDNA solution (3 ml, 3.75×10-3 mol×l-1) was added to the colorimetric ware and titrated with a specific volume of TA and derivatives (3.75×10-2 mol×l-1). The background absorption from all reagents was subtracted from the absorption spectra by using a corresponding solution without ctDNA as the reference solution.

Tranexamic acid modifiers were synthesized by solid phase peptide synthesis on Wang resin with good yield (~80%) and then analyzed via RP-HPLC. The final derivatives were isolated with high purity (>95%) and characterized via 1H-NMR and ESI-MS. The characterization results of TA derivatives are as follows:

When small molecules interact with the DNA, the contraction and extension of the DNA molecule usually induces hypochromicity in UV spectra of the interaction system, and the explosion of DNA base pair lead hyperchromicity [10-12]. Ultraviolet absorption at 260 nm of ctDNA showed a hypochromic effect with increasing concentration of TA and derivatives and the maximum absorption wavelength remained unchanged. The hypochromism at maximum absorption wavelength in UV spectra of TA and derivatives is shown in Figure 2. 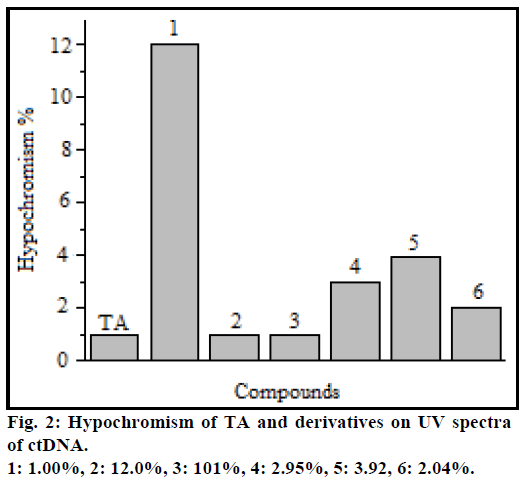 The difference in hypochromism of TA derivatives compared with that of free TA can be attributed to the side chains of amino acid residues which lead to the charge and spatial structure changes of derivatives, and affect the interaction [13]. The hypochromism of 1 to ctDNA was the largest which might be attributed to the imidazole of histidine residue, also the structure of 1 was easier to embed into the ctDNA groove than free TA [14,15]. The carboxyl of Glu, hydroxyl of Ser and Tyr in the derivatives can be ionized at physiologic condition, which enhances the electrostatic interaction of derivatives with DNA phosphate backbone, thus their hypochromism was increased by the interaction between charges [16]. But the different hypochromisms between 3 and 4, 1 and 2, and 5 and 6 indicated that the spatial structure, electrostatic and hydrophobic environment are important to the interaction.

Six TA derivatives were synthesized by solid-phase peptide synthesis with good yield. The preliminary interaction between derivatives and ctDNA provided valuable information in understanding the interaction mode of modified drugs with DNA, and in exploring the development of novel and highly effective peptidyl drugs.