A series of nicotinyl 4-oxathieno[2,3- d ]pyridine-2-ylmethyl esters, title compounds were synthesized. Compound IIIa was subjected to in vivo antihyperlipidemic activity in Wistar rats. The activity exhibited by synthesized compound was found to be less as compared to that produced by a standard, atorvastatin, administered in the form of suspension in 2% gum acacia. The activity was even lesser than that produced by the lead IIa.

Nicotinic acid can be taken for longer periods without serious toxicity, for plasma lipid lowering [1]. Even studies indicated that nicotinic acid can be added to the lipid lowering action of other drugs, particularly clofibrate and bile acid-binding resigns [2]. Although, some success has been achieved in reducing cardiovascular risk by decreasing blood cholesterol level, still emphasis need to be given on the fact that cholesterol is only a secondary risk factor. The primary risk factor for cardiovascular diseases is the weakness and instability of blood vessel wall which is unfortunately not considered for decreasing cardiovascular risk. Conventional medicine is limited only to treating the symptoms of secondary risk factors. As per modern cellular medicine cholesterol, triglycerides, low density lipoproteins (LDL), lipoprotein (a) and other metabolic products are actually ideal repair factors and their blood levels increase in response to the weakness of the arterial walls. A chronic weakness of the blood vessel walls increases the demand and thereby increases the production rates of these repair molecules in the liver, this leads to increased level of cholesterol and other repair factors in the blood stream and over some time renders them risk factors for cardiovascular disease [3]. Thus the primary measure for lowering cholesterol and other risk factors in the blood stream is to stabilize the arterial wall and thereby decrease the metabolic demand for increased production of these risk factors.

Further cholesterol lowering without first stabilizing the arterial wall may be an insufficient cardiovascular therapy.

Scientific research and clinical studies have already documented the particular value of vitamin B3 (nicotinic acid) and also vitamins like vitamin C, vitamin B5 (pantothenic acid), vitamin E and carnitine in lowering of elevated cholesterol levels and other secondary risk factors in the blood. Vitamins and other essential nutrients lower the particular rate of cholesterol and other repair molecules in the liver and at the same time, contribute to the repair of the arterial wall.

These facts ignited a thought to develop novel molecules which are basically comprising of both, vitamin B3 as well as 2-chloromethylthienopyrimidine- 4(3H)-one nucleus, the later having already demonstrated significant potential to reduce blood cholesterol levels [4-7]. Thus the aim of present work was to synthesize the mutual prodrugs and evaluates it in Wistar albino rats for antihyperlipidemic activity.

All the chemicals used in the synthesis were of laboratory grade. The Melting points were determined in open capillary method on Campbel electronic apparatus and are uncorrected. The ultraviolet absorption spectra were determined in methanol by using a Shimadzu UV/Vis 1601 double beam spectrophotometer. The IR spectra of synthesized compounds were recorded on Shimadzu 8400-S FT-IR in potassium bromide discs. The 1H NMR spectra were recorded in CDCl3 using NMR Varian-Mercury 300 MHz spectrometer and chemical shifts are given in units as δ ppm, downfield from tetramethylsilane (TMS) as an internal standard. Mass spectra were obtained on an Electron Impact mass spectrometer at 70 eV ionizing beam and using direct insertion probe. The spectral data of the synthesized compounds is shown in Table 1. Thin layer chromatography was performed on microscopic slides (2×7.5 cm) coated with silica gel-G, using benzene-methanol or benzene-methanol-ammonia as the solvent systems and the spots were visualized by exposure to iodine vapors or under UV light. The titled compounds were synthesized as per scheme-1 and scheme-2. 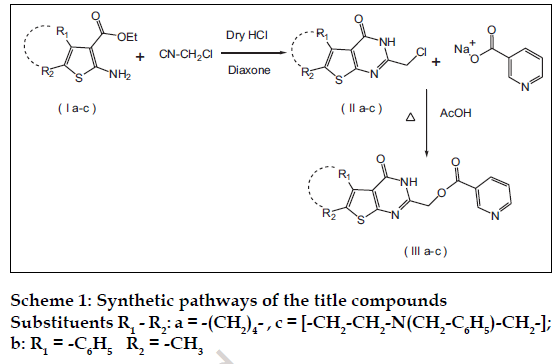 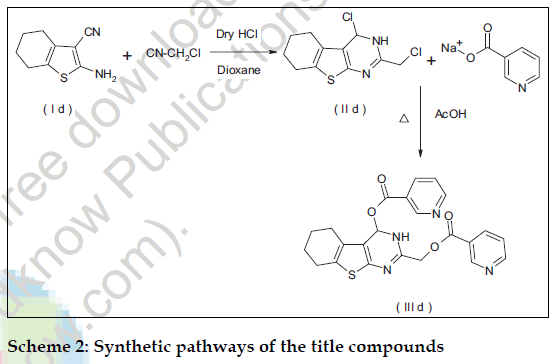 The activities exhibited by the synthesized compounds (Table 2) were found to be less as compared to that produced by a standard, atorvastatin, administered in the form of suspension in 2% gum acacia. The total serum cholesterol reduced by the standard drug, atorvastatin, in the experimental animals were 49±2.53%. Against this, the compounds (IIa) and (IIIa) reduced the total serum cholesterol by 39.6±4.70 and 14.08±4.19%, respectively.